Ivanka Trump steps out in white pants after Labor Day

Ivanka Trump flouted traditional fashion rules when she headed to work on Monday morning, donning a pair of white pants – which typically ‘shouldn’t’ be worn after Labor Day.

But despite going against the style grain, the 37-year-old looked incredibly chic as she made her way out of her family home, modeling the ankle-length white pants with a chick blue jacket that was belted at the waist, and worn over a silk neck scarf.

The mother-of-three then accessorized the outfit with a pair of pearl earrings, pale blue heels, and a white tote bag from her now-defunct eponymous fashion line.

A real rebel: Despite the outing coming several weeks after Labor Day, the 37-year-old wore a pair of white pants – something traditional style rules say you shouldn’t do 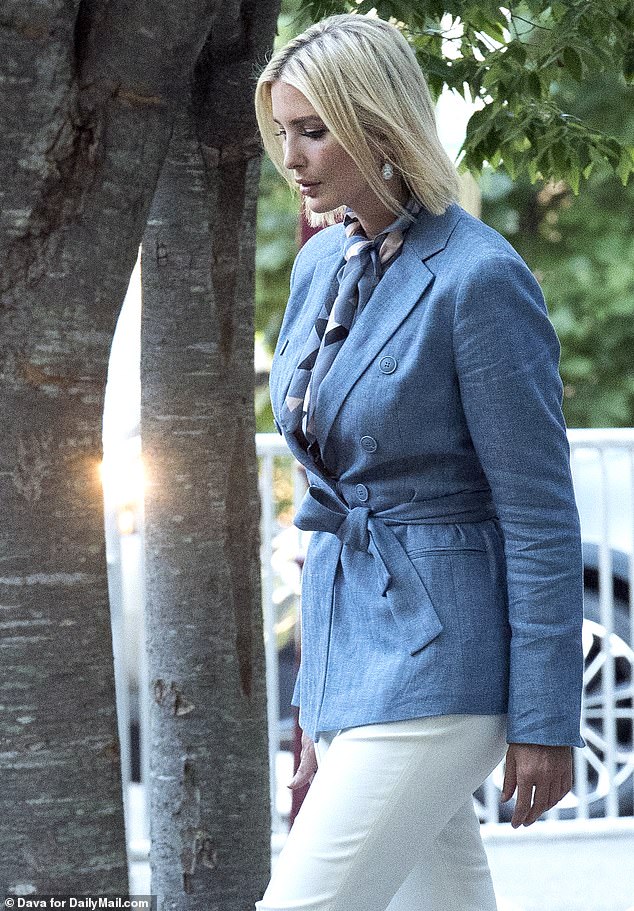 Sleek: Ivanka modeled the same short bob that she first debuted during her trip to South America earlier this summer

It appears as though Ivanka may have been feeling a touch of the Monday blues; she kept a somber expression as she made her way out of the house that she shares with her husband Jared Kushner and their three children.

It’s possible that she was simply thinking back to her fun-filled family weekend, which saw the first daughter spending time with her children – and with Jared’s 93-year-old grandmother.

Ivanka paid tribute to her ‘Babi’ in a touching Instagram post on Sunday morning, sharing a photo of Jared’s grandma sitting in a chair with daughter Arabella’s dog Winter, while praising her kind personality and charisma.

‘My sweet and wickedly funny grandmother is 93 years young and still an epic raconteur and favored lunch date!’ she wrote alongside the snap. ‘I’ve met many kind, charismatic and accomplished people in my life but my Babi tops the list!

‘What a blessing to be able to spend time with her!’

Shortly after posting the sweet tribute, Ivanka shared two images of her son Joseph’s hands as the mother-son duo made dragon beard candy – a traditional Chinese treat that is similar to cotton candy.

Ivanka and her husband Jared have instilled a number of Chinese traditions into their children’s lives; all three kids are believed to have started learning Mandarin at a very young age, with Arabella, now eight, showing off her skills on a number of occasions, including serenading Chinese President Xi Jinping during his first official meeting with Donald Trump in April 2017. 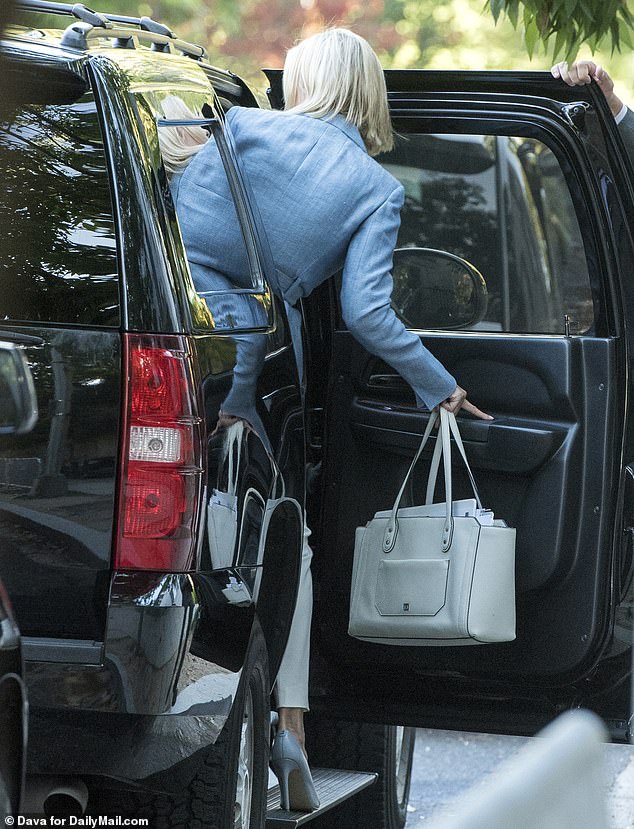 There she goes: The first daughter clambered into a waiting blacked-out SUV that was parked outside her home in Washington, D.C. 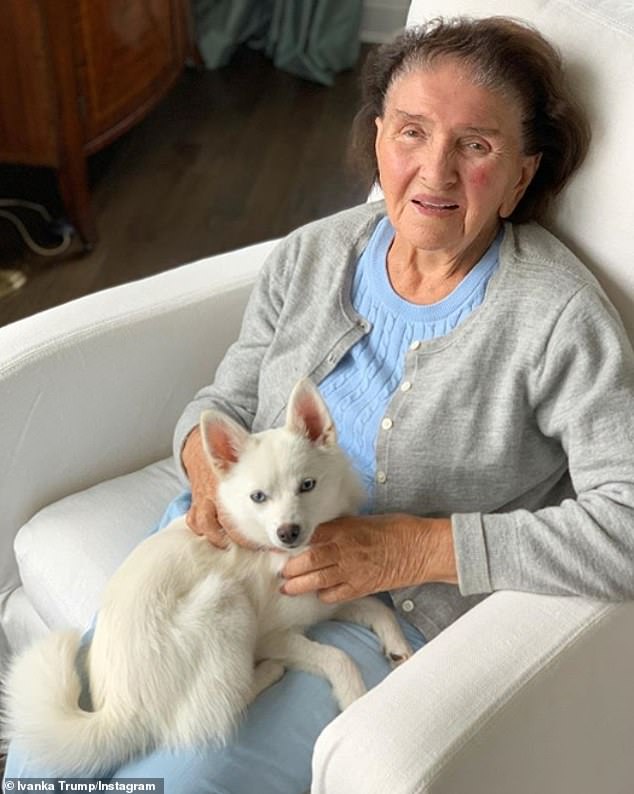 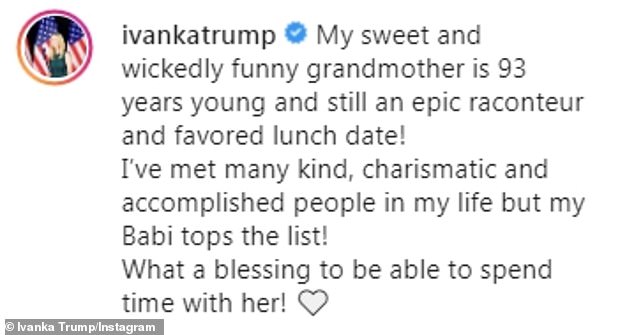 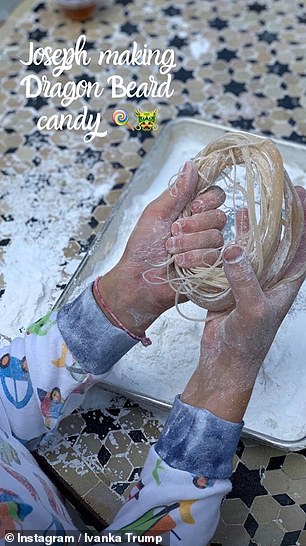 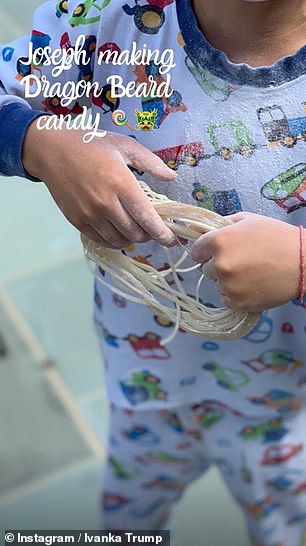 Busy in the kitchen! Ivanka also found time to make dragon beard candy – a traditional Chinese treat – with her son Joseph over the weekend

Each year when their children celebrate their birthday, the family also puts its own spin on the Chinese tradition of Long Life Noodles – or Yi Mein – which are traditionally eaten at all Chinese celebrations, including birthdays and at the New Year.

Ivanka and her childrenhave been making the milestone marker their own for many years now, with each of the three siblings sharing a spaghetti dinner with their mother on their birthdays.

The first daughter’s family-focused weekend at home comes just weeks after she is said to have told high-power Republican donors at a posh GOP retreat that her father passed on his moral compass to her.

At a mid-August event in Jackson Hole, Wyoming, the first daughter said her mother taught her how to be a powerful, successful woman and then described how President Donald Trump passed on his morals.

She related the lessons to the 120 donors at an event organized by Republican House Leader Kevin McCarthy, Politico reported, where she and husband Jared Kushner dazzled the crowd with insider bits about life in the Trump administration.

The goal was to humanize the president and offer some inside scoop on the Trump administration – all part of the pitch to gain support ahead of the 2020 re-election campaign.

During Ivanka’s pitch to donors, moderated by former ‘Entertainment Tonight’ host Mary Hart, President Trump called in to greet the crowd and tell them they were in good hands with his daughter and son-in-law, according to Politico. 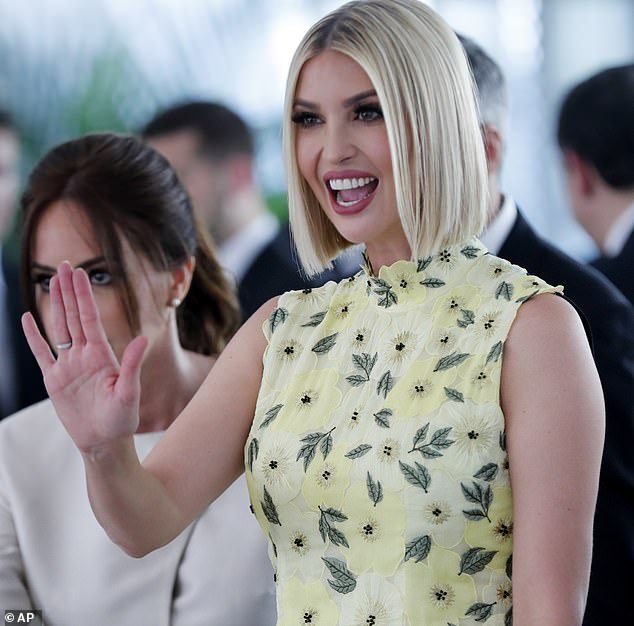 Moving on: The outing comes just weeks after Ivanka told high-power Republican donors at a posh GOP retreat that her father passed on his moral compass to her

‘You have to have a draw to convince donors to write a $50,000 check to come to a fundraiser,’ a White House adviser told the news website. ‘The president and vice president are obviously a draw, and Melania Trump would be amazing, if she would do it. The next best things are the kids. You have to fill the program with surrogates the donors want to see.’

The first daughter has a legendary close relationship with her father, whom she followed to the board room at the Trump Organization, to the television set of NBC’s ‘The Apprentice,’ and on to 1600 Pennsylvania Avenue.

‘My father taught my siblings and me the importance of positive values and a strong ethical compass,’ Ivanka Trump told the Republican National Convention in 2016.

She has not expounded upon what she means by that but she often touts her father’s business abilities.

President Trump was the biggest promoter of his real estate career – courting the New York tabloids and putting his name on his buildings.

But he struggled with debt and financing issues. And he still faces questions about his taxes, which he has not released because – he claims – he is under audit.

His personal life also has been under the microscope.

Donald Trump left Ivanka’s mother, Ivana, after an affair with Marla Maples, who he later married and divorced.

He faced questions about his treatment of women. During the 2016 campaign, a tape of an interview he gave ‘Access Hollywood in 2005, where he said ‘when you’re a star, they let you do it, you can do anything … grab ’em by the p****.’