Ivanka Trump reportedly confronted her father, President Donald Trump, during the 2016 campaign and angrily demanded he do more to accommodate her husband, Jared Kushner, it has been reported.

Then-candidate Trump’s daughter burst into his office on the 26th floor of Trump Tower in New York City one day during the campaign, Vanity Fair reported on Friday.

‘I need to talk to you,’ a campaign official recalled Ivanka Trump telling her father.

‘You don’t give Jared the support he needs. He’s left his business to be a part of this. You have no idea what he’s sacrificing to be here and how hard he is working for you.’

Ivanka Trump then told her father that she was personally hurt by his lack of appreciation for his son-in-law and that it was affecting their marriage.

Ivanka Trump reportedly confronted her father, President Donald Trump, during the 2016 campaign and angrily demanded he do more to accommodate her husband, Jared Kushner, it has been reported. Kushner and Ivanka Trump are seen in Washington on January 30, 2018

‘What does he want?’

Speculation has been rampant in both Washington, DC and New York that the Kushners are waiting until the school year ends in June before returning home to Manhattan.

Last November, President Trump told Ivanka Trump and her husband, Jared, that they should return to New York in order to escape the negative publicity they have received since taking up their positions as White House advisers, according to Vanity Fair.

But if and when the couple does return to New York, they may find that their social circle has abandoned them.

Donald Trump’s divisive rhetoric throughout the campaign and during his presidency has reportedly turned off many people who counted Kushner and his wife as friends.

‘What are they coming home to here?’ a New York-based friend told Vanity Fair.

‘A bunch of people who haven’t exactly been counting down the seconds since they’ve been gone.’

Last October, Ivanka Trump and her husband were conspicuously left off the invitation list for a Halloween party at the Metropolitan Museum of Art.

The party was being co-hosted by Wendi Murdoch, a close friend of the couple.

Some of the predominantly liberal Manhattan crowd that Kushner and his wife counted as friends turned away from them after it became apparent that Trump was going to win the presidency. 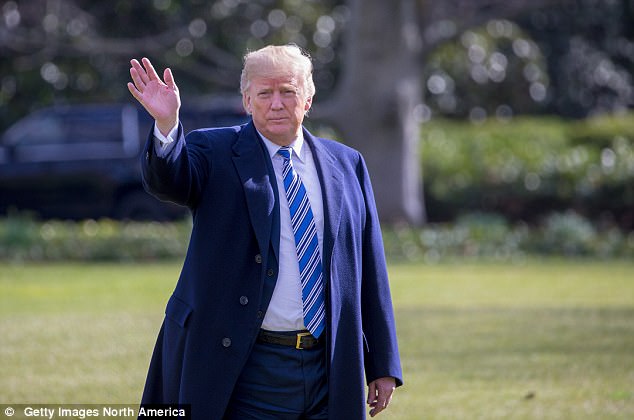 Ivanka Trump felt that her father wasn’t appreciative of her husband’s ‘hard work’ to help get him elected, it was reported on Friday

But the couple felt it was worth sacrificing their friends if they felt they could make an impact on policy.

What is complicating matters for Kushner is the legal difficulties he is likely to find himself in because of the Mueller investigation.

The probe into alleged Russian meddling in the 2016 election is closing in on Trump, with Kushner being mentioned as a likely candidate to eventually be indicted.

Last month, it was reported that Kushner’s role in the West Wing was significantly downgraded after Chief of Staff John Kelly denied him access to top secret intelligence reports.

Kushner, who had been operating under an interim security clearance for about a year, had his access to the president’s highly classified daily briefing cut off in the past few weeks, said the sources.

The nature of that information was not clear.

It also is unclear if and when Kushner’s access to the briefing, known as the PDB, which requires clearance higher than the Top Secret level, would be reinstated.

Kushner, a wealthy New York businessman, has not received his full security clearance because of his extensive financial links, which have taken a long time to examine. 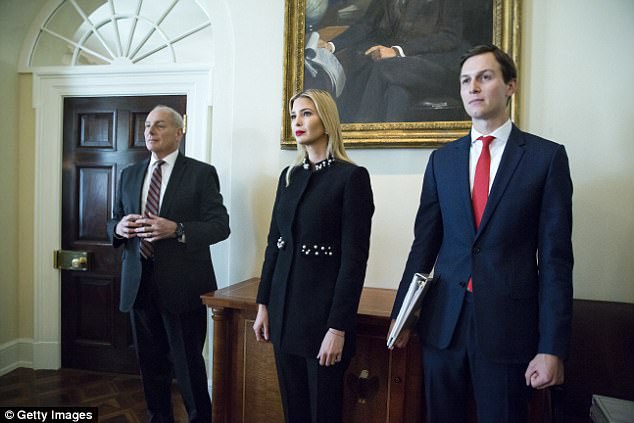 Last month, it was reported that Kushner’s role in the West Wing was significantly downgraded after Chief of Staff John Kelly (far left) denied him access to top secret intelligence reports. Kelly, Ivanka Trump (center) and Jared Kushner are seen at the White House on March 8

He has revised his security clearance form, called an SF-86, several times.

Kushner’s reduced access to sensitive information has fueled further talk that a return to New York is imminent.

Faced with the spectre of indictments from Mueller, there is the distinct possibility that the Russia probe will cause a split in the Trump family.

One friend of the president told Vanity Fair that if Donald Trump was faced with the choice of taking the fall to save Kushner or sacrificing his son-in-law to save his own skin, the choice is clear.

‘If you think he’s going to tie himself to the kid, you don’t know anything,’ the long-time friend of the president said.

‘If it’s going to cost him his legacy, not a chance.’

Another former Trump adviser told Vanity Fair that one of the reasons he is keeping Kushner around is ‘to not let him out of his sight’ – especially if he is indicted.

Another unknown question is what Ivanka Trump would do if faced with choosing between her husband and her father.