Ivanka Trump met with employees and customers at a Walmart in Mesquite, Texas, on Friday, just one day after her trip to Houston to tour NASA’s Johnston Space Center.

The 36-year-old first daughter looked right at home in the megastore, which has a Walmart Academy training program dedicated to helping associates advance their careers.

Whether it was intentional or a happy coincidence, Ivanka donned a navy top with a mock-neck that matched the navy blue polo shirts worn by the Texas Walmart’s employees.

Meet and greet: Ivanka Trump, 36, met with employees and customers at a Walmart in Mesquite, Texas, on Friday 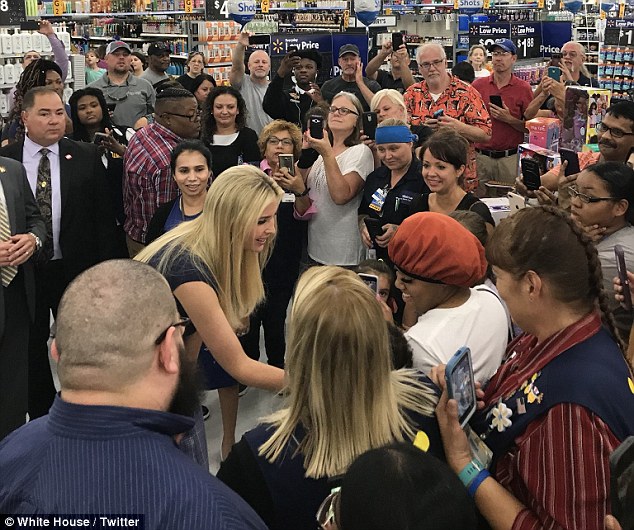 Fan club: People crowded around the first daughter and took photos of her as she smiled and shook hands with customers and store associates

Although she wasn’t wearing the retailer’s budget-friendly clothes, she did choose a more affordable outfit for her visit compared to her usual designer duds.

The senior adviser topped off her ladylike look with a pair of classic pumps for her meet-and-greet at the store.

Upon her arrival, the senior adviser was welcomed by Walmart CEO Doug McMillon, who gave her a guided tour of the store and its development programs.

Ivanka, who has been an advocate for workforce development during her father’s time in the White House, was visiting the Walmart to learn about how the company is investing in its employees’ futures. 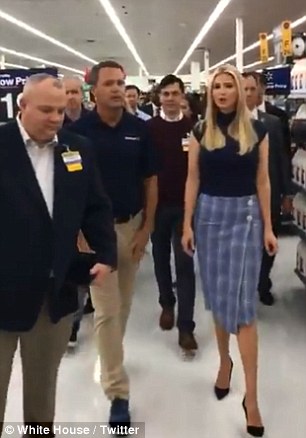 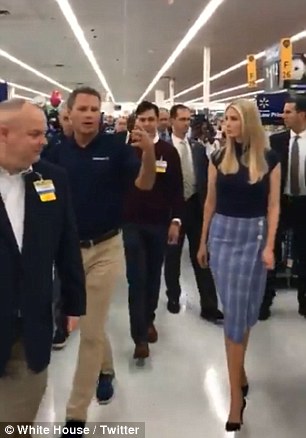 Student for the day: The CEO also took Ivanka to see the on-sight classrooms at the store’s Walmart Academy, which provides training programs for employees

People crowded around the first daughter and took photos of her as she smiled and shook hands with customers and store associates.

Walmart was one of the companies that signed the Trump administration’s ‘Pledge to America’s Workers’ initiative, which is committed to expanding workforce training.

Ivanka met with employees in the Walmart Academy’s ‘Assistant Store Manager’ class to discuss how the training has helped them adapt to changing technology.

She also heard from recent graduates who told her about the skills they learned in the program and how it has helped advance their careers.

Ivanka is known for being hands-on during her visits, and her trip to Walmart was no exception. 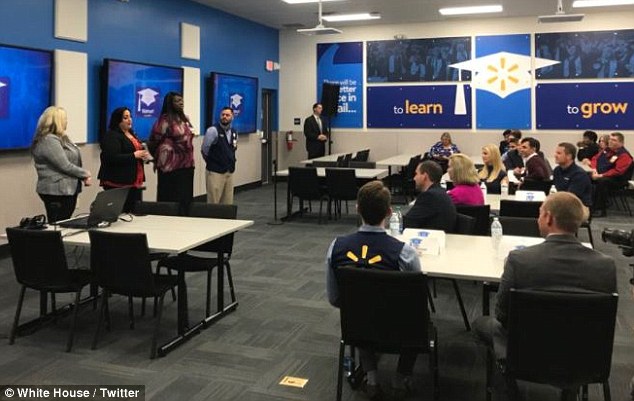 All ears: Ivanka heard from recent graduates who told her about the skills they learned in the program and how it has helped advance their careers 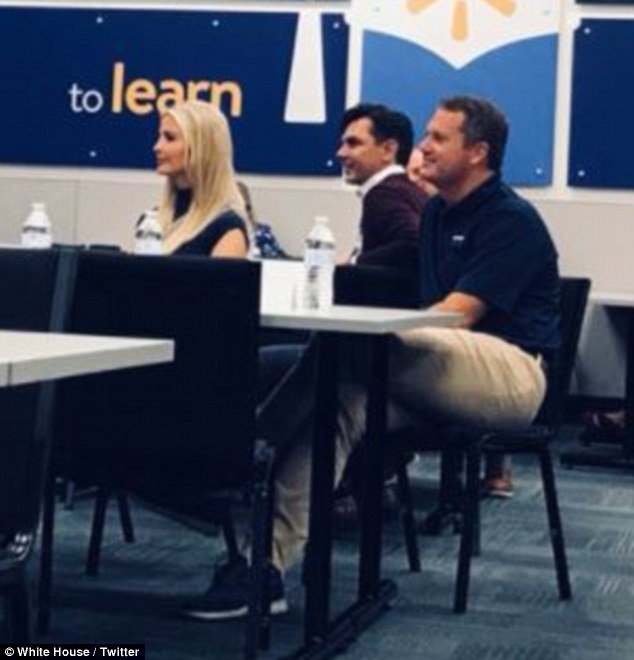 Passion project: The senior adviser has been an advocate for workforce development during her father’s time in the White House Hands on: Ivanka used the academy’s virtual reality technology to learn how to manage produce

White House Office Director of Media Affairs Judd Deere tweeted pictures and videos of Ivanka at the Walmart, including footage of her testing out the academy’s virtual reality technology to learn how to manage produce.

‘I mean this is really cool,’ she said, and people couldn’t help but laugh as she waved the remote control around the room.

‘Where’s the cosmetics at,’ she joked.

However, while Ivanka was focused on workforce development, the company was concerned about her father’s trade war with China. 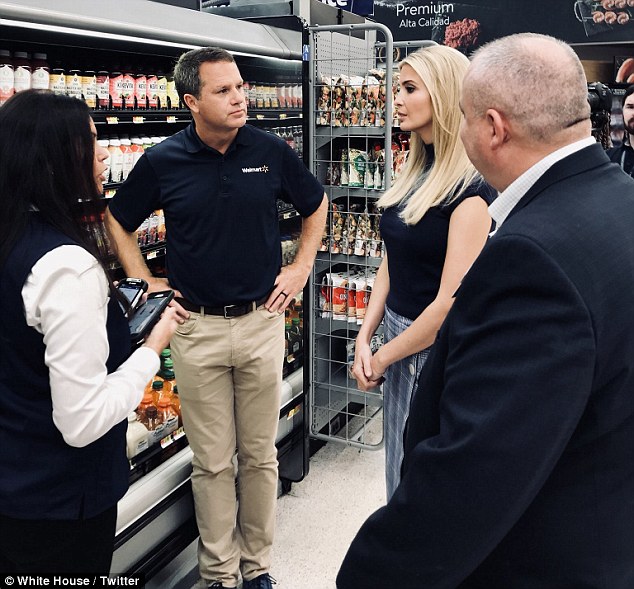 Fitting in: The first daughter donned a navy top that matched the store employee’s polo shirts and a $79.99 blue checked wrap skirt from Mango

Walmart, which is the largest U.S. retailer, has warned the Trump administration that the latest tariffs on Chinese imports could mean price hikes on everything from car seats to pet products.

‘This round of tariffs could impact a significant number of common consumer items that are not easily replaceable,’ Sarah F. Thorn, a senior director for global government affairs at Walmart, wrote in a September 6 letter to the U.S. Trade Representative.

‘The immediate impact will be to raise prices on consumers and tax American business and manufacturers.’

In retaliation for President Donald Trump’s planned levies on $200 billion worth of Chinese goods, Beijing added $60 billion of U.S. products to its tariff list on Tuesday.

The tit-for-tat measures are the latest escalation in an increasingly protracted trade dispute between the world’s two largest economies.

The U.S. administration will begin to levy new tariffs of 10 percent on about $200 billion of Chinese products on September 24, with the tariffs to go up to 25 per cent by the end of 2018. 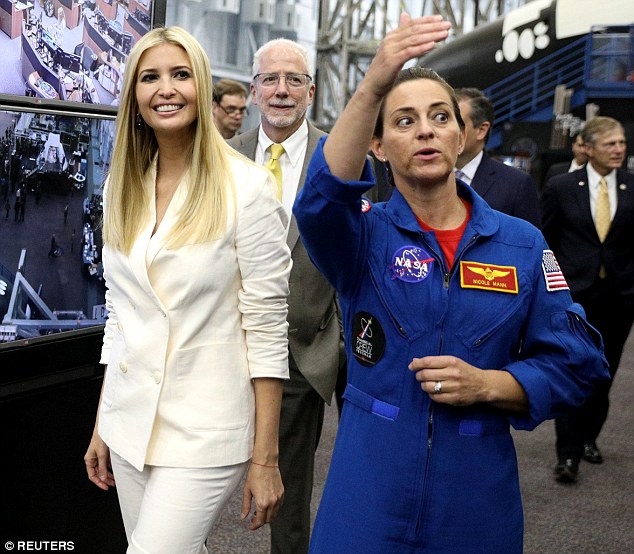 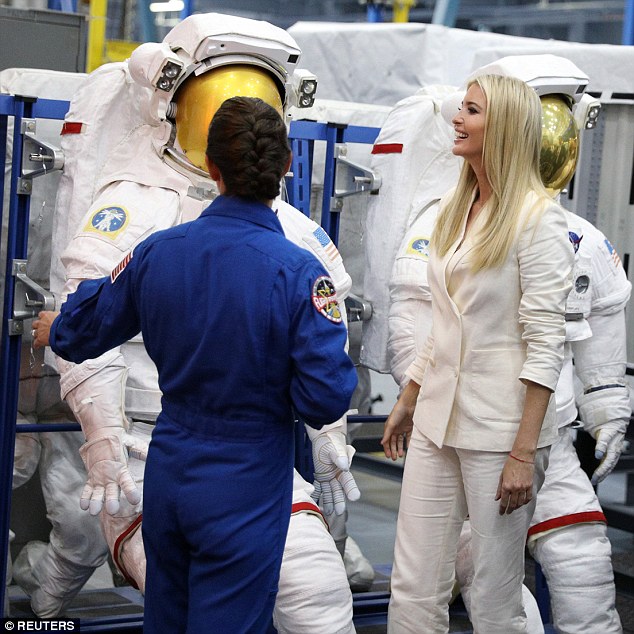 The color of a space suit! The senior adviser donned a white double-breasted blazer and matching cropped pants

Looking chic in a white double-breasted blazer and matching cropped pants, Ivanka struck a pose outside the doors of Mission Control.

Inside, she met Chief Holly Ridings, who made history this week when she became the first woman in NASA’s 60-year history to become the Johnson Space Center’s chief flight director.

During a call from Mission Control, she told the International Space Station crew that she had always wanted to be an astronaut.

‘You inspire us all. You actually have my dream job,’ she admitted.