Ivanka Trump turned her protective face mask into a fashion statement on Monday when she was pictured leaving her Washington, D.C. home in a chic silk ensemble that perfectly matched the blue of her disposable face covering.

The 38-year-old First Daughter looked ready for a busy work day as she strolled out of the home that she shares with husband Jared Kushner, 39, and their three children, carrying two white binders under one arm as well as a large black leather handbag.

It is the first time that Ivanka has stepped out publicly since heading off for a July 4th getaway with her family, during which she shared multiple images of herself and her family enjoying outdoor activities like horseback riding and hiking. 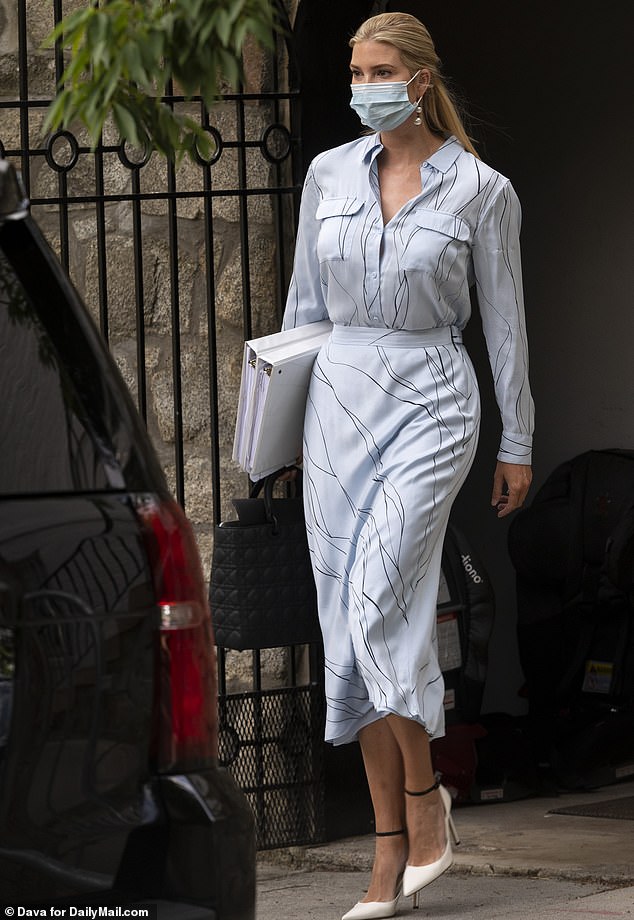 Chic: The 38-year-old wore a blue silk ensemble from Equipment, coordinating the look to her protective gear – but the $306 shirt and $383 skirt were much more expensive than the mask

But on Monday it was back to business as usual for Ivanka, whose ensemble was a world away from the laidback outfits she modeled during the family’s vacation.

Instead of jeans and flannel shirts, Ivanka donned a blue $689 silk outfit from Equipment – a coordinating shirt and skirt that perfectly matched the blue of her disposable face mask.

The First Daughter then paired the look with some cream pointed-toe heels that featured a slim black strap around the ankle.

She completed her outfit with a funky pear of pearl earrings that dangled beneath the straps of her surgical-style mask.

Underneath the mask, Ivanka appeared to go almost entirely bare-faced, leaving her complexion free from makeup, while her blonde hair was pulled back in a half-up style, then left straight to hang back behind her shoulders.

This is not the first time that Ivanka has donned a coordinating mask-and-outfit look, having showcased her style skills on multiple occasions by matching her protective facewear to whatever outfit she is wearing.

Ivanka has actually come under serious criticism from her father’s most outspoken supporters because of her decision to not only wear face masks, but to encourage others to don the protective gear too.

On July 1, she posted a photo on Instagram showing herself wearing a light blue face mask as she posed outside with Republican Leader of the House Kevin McCarthy and Republican Rep. Bruce Westerman from Arkansas. 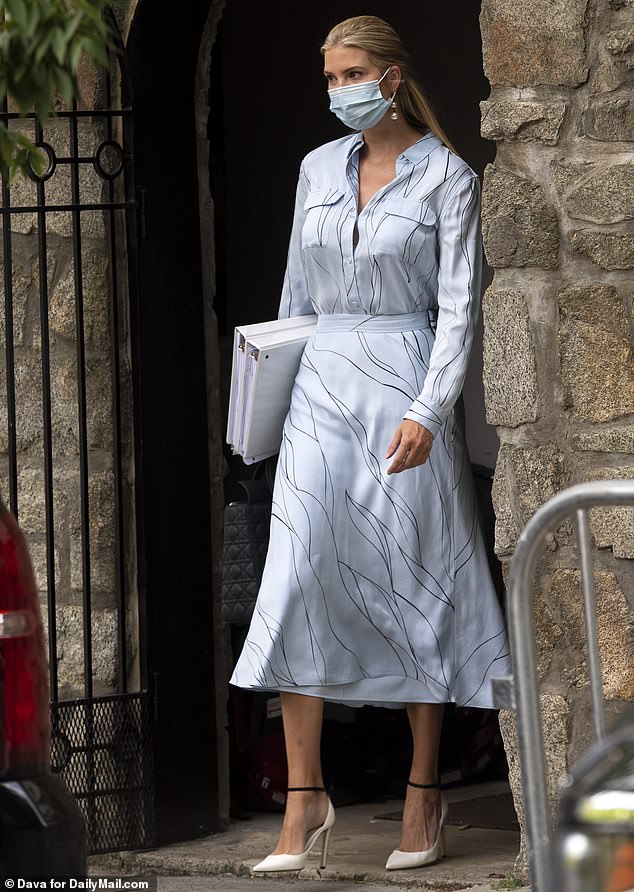 Busy? Ivanka looked like she meant business as she left her home, carrying a large black leather handbag and two white binders 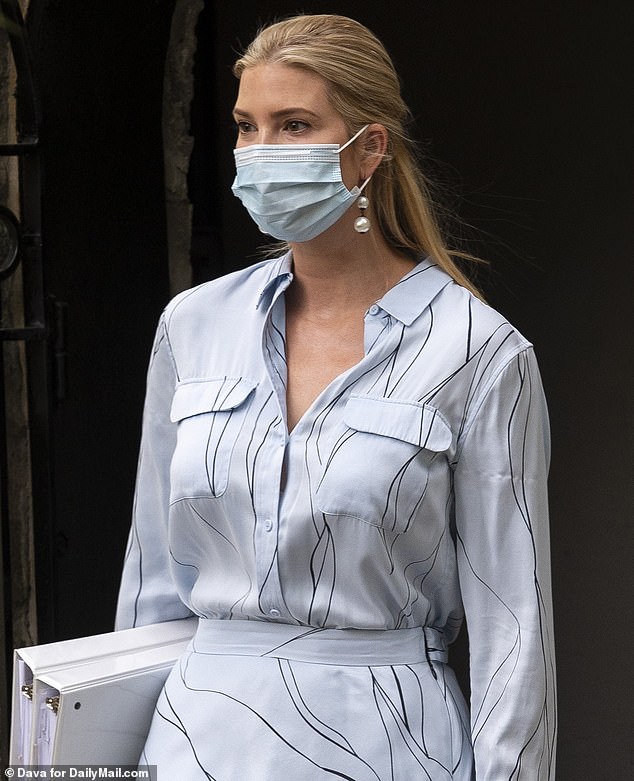 Accessories: The First Daughter added some funky pearl earrings to the look 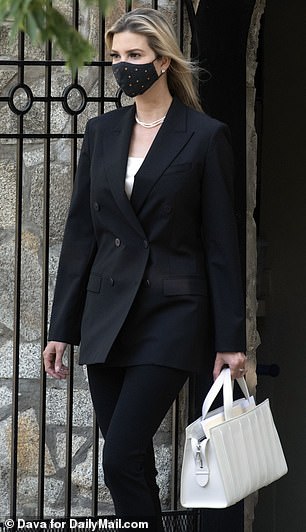 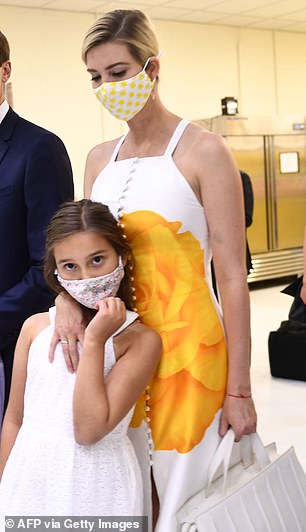 Fashion star: Ivanka regularly matches her face mask to her outfit, having done so several times in the past, however she usually opts for a reusable mask instead of a disposable one

But while Ivanka’s caption encouraged others to follow suit and wear their own masks in public, her father’s supporters are not convinced — and are chastising the first daughter, telling her to remove the mask.

The photo showed Ivanka and the two representatives outside. Rep. Westerman wore a suit and surgical mask, Rep. McCarthy had a gray cloth mask, and Ivanka was modeling a pretty blue watercolor mask.

The caption — which Ivanka copied from Rep. McCarthy — read, ‘Wear a mask. Plant a tree,’ and included both a tree and a face mask emoji.

However the post sparked fury from some of her followers, many of whom chastised the First Daughter for wearing a face mask.

‘Please do not wear a mask that’s not what we were created to do,’ wrote one, while another told her to ‘take the mask off.’

‘I love POTUS but this mask bs needs to stop,’ said another, while others called her ‘silly’ and ‘stupid’ and posted sheep emojis.

More comments have poured in, with countless Trump supporters telling her to lose the mask.

‘Why are you reppin the mask? Take that off…….’ wrote one commenter 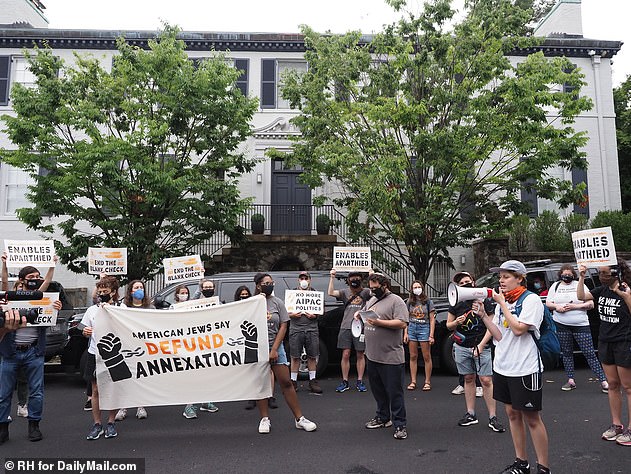 Timing: On Tuesday, protesters gathered outside Ivanka and Jared Kushner’s home in to denounce the Israeli occupation of the West Bank and the Gaza Strip 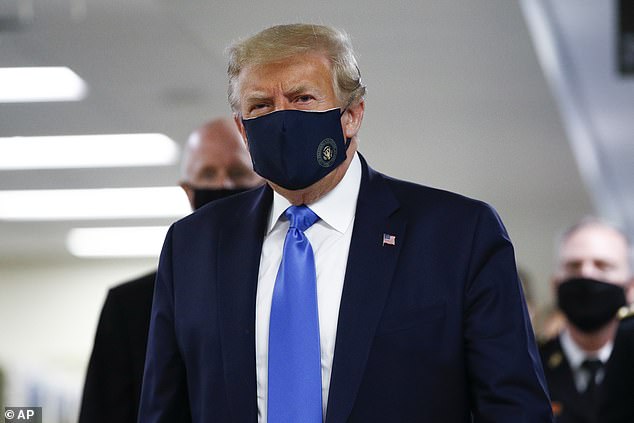 Good influence? Ivanka’s father, President Donald Trump, wore a face mask in public for the first time over the weekend

‘Mask are bs if you where a mask why social distance all bs political bs,’ wrote another.

However, it seems as though Ivanka’s fondness for face masks may well be rubbing off on her father, President Donald Trump, who was pictured wearing a mask in public for the first time over the weekend when he visited the  Walter Reed National Military Medical Center in Bethesda, Maryland on Saturday.

The President has repeatedly shrugged off suggestions of wearing a mask, saying that it causes people to touch their face too much and so is not helpful.

Health experts agree that face masks are useful at stopping the spread of COVID-19.

People close to him have told The Associated Press that the President feared that wearing a mask would make him look weak and was concerned that it shifted focus to the public health crisis rather than the economic recovery.

As he left the White House on Saturday afternoon he told reporters: ‘When you’re in a hospital, especially, I think it’s expected to wear a mask.’

Trump told Fox News on Thursday that he would wear a face mask during the trip.

Ivanka’s outing on Monday morning comes less than a week after protestors gathered outside her home in D.C. to decry the Israeli occupation of the West Bank – not realizing that the First Daughter and her family were not actually in the property at the time. 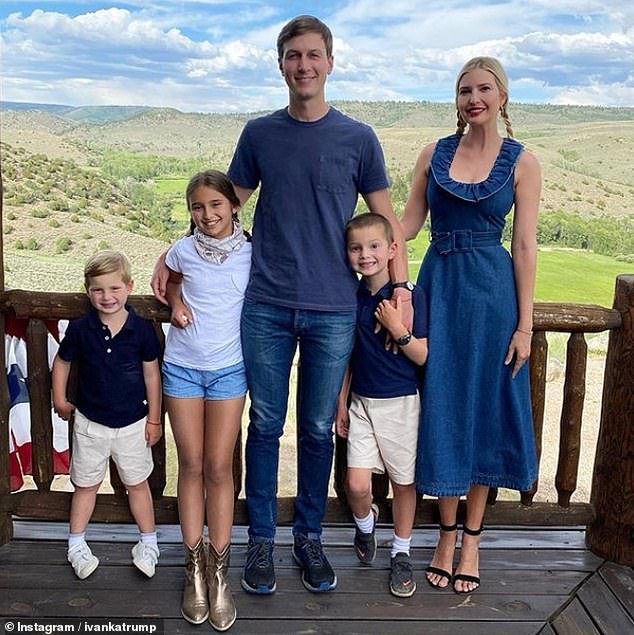 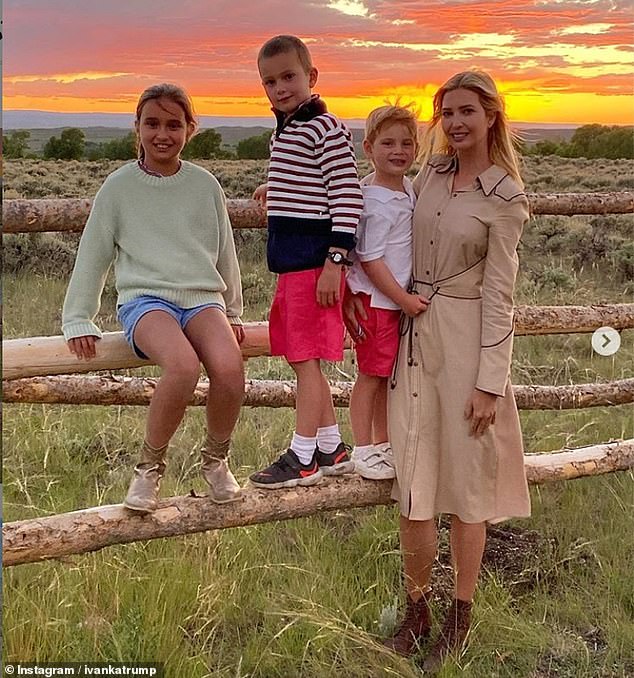 Scenic: Although Ivanka did not specify the location of the getaway, she happily shared plenty of images from the fun-filled trip 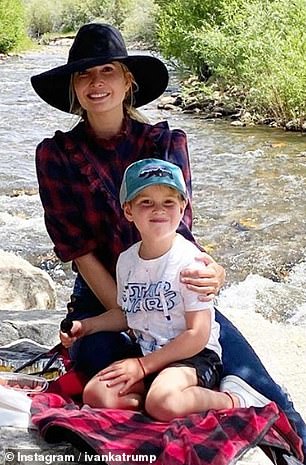 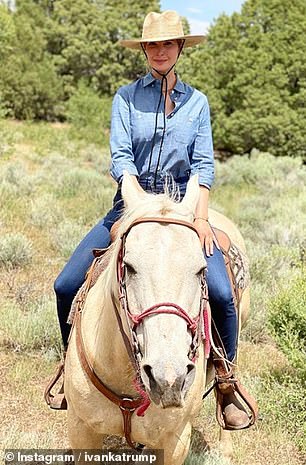 President Trump’s son-in-law and senior aide Jared, who is Jewish, has been leading talks with Israel and debating whether to support Israel’s move to annex the disputed territory.

Demonstrators with IfNotNow, a progressive American Jewish group that opposes Israel’s occupation of the Gaza Strip and the West Bank, wore masks as they rallied outside the couple’s lavish home Kalorama on Tuesday afternoon.

‘This morning we are going to his house to wake him up. We’re protesting the government’s plan to annex the West Bank,’ a protester said in video of the event.

However, Ivanka, Jared, and their children Arabella, eight, Joseph, six, and Theodore, four, were not home.

The family had not yet returned from their July 4th getaway – which took place in an unknown location inside the US, perhaps the same Wyoming ranch that they have previously visited in the past.

During their trip, Ivanka, Jared and their children enjoyed all kinds of outdoor activities, including horseback riding, fishing, and hiking.

She wished her 6.4 million Instagram followers a ‘Happy 4th July!’ in the caption of a sweet image of her family standing together on a porch with a backdrop of rolling hills behind them.