Jab of tiny pellets could stop the pain of arthritis

Pain-zapping pellets are being fired into the knees to take the discomfort out of arthritic joints.

The tiny spheres — made from gel-like plastic, each 30 or more times thinner than a credit card — increase in size once injected into the knee.

They work by blocking rogue blood vessels containing new nerve fibres that develop with the onset of osteoarthritis and contribute to the pain.

A pilot study involving five patients who failed to respond to other non-surgical treatments showed that injecting an arthritic joint with thousands of these microspheres can cut symptoms by a third or more, with long-lasting effects.

Four of the five had a significant improvement in pain, which was still apparent three months later, and, overall, symptoms more than halved, according to the study carried out by the Vascular Institute of Virginia in the U.S. and reported in the current issue of the Journal of Vascular and Interventional Radiology.

The pellets are already used to treat fibroids, non-cancerous growths that develop in, or, around the womb. Once the fibroids lose their blood supply, they disappear.

Researchers now believe that the same approach could work for osteoarthritis, the most common form of arthritis, affecting millions of people in Britain.

The condition develops as the joint surface of cartilage wears away — usually with advancing age — causing inflammation and pain. As the underlying bone becomes exposed and rubs against other bone, the pain worsens.

Inflammation is thought to lead to the production of growth factors and other compounds that trigger the growth of new blood vessels — a process known as angiogenesis. These newly formed blood vessels grow into the cartilage and adjacent bone, bringing with them new nerve fibres that cause increased pain.

The microsphere treatment is thought to destroy these new, abnormal blood vessels and nerves by cutting off the supply of nutrients they need to survive. This reduces inflammation and pain, and halts or delays further joint damage. 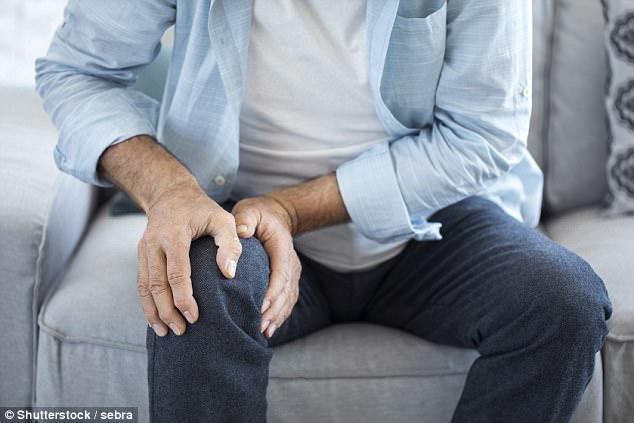 Researchers now believe that the same approach could work for osteoarthritis, the most common form of arthritis, affecting millions of people in Britain (file photo)

During the treatment, rogue blood vessels are identified with MRI scans and then injected with the solution containing the microspheres. Once released into the body, the spheres expand by up to one-third and become jammed in the blood vessel, blocking off its blood supply. The blood vessel eventually collapses and the dead tissue is absorbed by the body.

The Virginia team is now conducting a larger trial involving 20 patients with osteoarthritis of the knee, who will be monitored for six months after having the treatment.

Currently, treatment for osteo-arthritis in the knee begins with lifestyle changes including weight loss and, in severe cases, requires joint replacement surgery.

‘The excess growth of blood vessels in the knee of osteoarthritis patients is known, and previous trials into treatments that effectively block this process have shown some promising effects,’ says Dr Stephen Simpson, director of research and programmes at Arthritis Research UK.

‘However, this is an ongoing trial, meaning that it is premature to predict what the potential results will mean for the 4.7 million people in the UK living with knee osteoarthritis.’

Meanwhile, scientists believe they are on the verge of developing the first gene therapy for osteoarthritis that could be injected straight into the joint.

The idea is that, rather than injecting a drug that could be quickly washed away by fluid in the joint, with gene therapy you deliver DNA that then encourages new tissue to grow.

The jab contains a virus that delivers allogenic chondrocytes, cells that help to regenerate tissue, as well as transforming growth factor, a protein that helps with cell growth.

According to a report published in the journal Human Gene Therapy, the treatment has been shown to work in principle and has been approved for use in Korea.

Trials will soon take place in the U.S. to check if it is as effective as other treatments.

Scientists are testing whether taste buds will be able to help treat type 1 diabetes.

Taste buds contain stem cells — master cells that can develop into other forms of cells.

Researchers at the National Institute on Aging in Baltimore, in the U.S., hope to turn them into insulin-producing cells (type 1 diabetes is caused when not enough insulin is produced).

In a study of 90 people, they will take biopsies of tissue about the size of a pen-tip from the end and sides of the tongue.

These will then be treated in the laboratory to see if the stem cells can be propagated to make insulin.

MATHS CAN PREDICT HOW CANCER SPREADS

Using the principles of applied mathematics might help scientists better predict how cancer will spread.

A study from the University of Waterloo in Canada used a form of mathematical analysis called evolutionary dynamics to track how colorectal and intestinal cancers spread.

The scientists found that when the cancer cells divide and replicate, the newly created cell differs greatly from the original.

This can affect how the cancer progresses, and they showed maths can help predict this progress.

The researchers hope that oncologists will use this to predict how cancers might behave and alter treatments accordingly.

An anti-inflammatory drug could make vaccines more effective for elderly people, according to research from University College London (UCL). This is because inflammation blocks the immune response needed for the vaccine to work.

When scientists exposed volunteers aged over 65 and under 40 to the chicken pox virus, the older people had the weakest immune response and most inflammation.

When some of the over-65s were then given an anti-inflammatory drug before re-infecting them, their immune response improved, reports the Journal of Allergy and Clinical Immunology.

The plan is to test if this drug can make the flu vaccine more effective for the elderly.

A brain training technique has been found to lead to a ‘significant’ reduction in seizures among epilepsy patients who don’t respond to medication, reports The Lancet and Cell Press journal.

While previous brain training techniques have been aimed at relaxing the brain, the new method, which involves concentrating and learning to move a computer-generated figure, aims to increase alertness.

In a study of 40 epilepsy patients, 45 per cent at least halved their number of seizures. Researchers have called for more studies to prove its cost-effectiveness.

Will eating brown bread or rice stop your arteries stiffening? That’s the suggestion from a recent study that examined the typical diets of 22 obese men.

It found the more wholegrains the men ate, the more supple their arteries, irrespective of whether they ate too much generally or not.

The scientists, from the University of Kentucky in the U.S., writing in the journal Nutrition, believe that wholegrains may contain an, as yet, unidentified specific nutrient that has a protective effect on the blood vessels.

Arterial stiffness can lead to cardiovascular disease and increase the risk of high blood pressure and stroke.