By Ben Hill and Alana Mazzoni For Daily Mail Australia

A dog named Jaboo who was brutally bashed in a random attack by a pedestrian is ‘happy and relaxed’ in RSPCA care.

Two men were filmed on CCTV walking along a street in Mackay, north Queensland, about 4.40pm on February 13 when one man bent down and coaxed the five-year-old bull arab cross over to him.

He patted the dog briefly when it rolled over, before brutally punching the animal for more than 20 seconds.

The man then picked up the defenseless animal by his collar and slammed it down before it managed to run away.

RSPCA Queensland inspector Rebecca Neilsen said Jaboo was being cared for by their staff.

‘He’s sitting with me… in my office. He’s had lunch and is eating well. He’s very relaxed in my air conditioning and he’s very happy,’ she told the Courier-Mail.

‘[Jaboo] has tested positive to heartworm but no other complications are apparent at this time,’ the organisation posted to Facebook on Thursday.

‘The offender has been identified and a warrant was executed on a property and the dog was seized. The dog is now in RSPCA care and is currently undergoing veterinary examination.

‘After a disturbance was reported in the street inspectors attended and required home owners in the street to provide CCTV footage to assist their investigation. Nobody was watching this incident as it occurred.’

The RSPCA did not confirm if the man who attacked Jaboo was his owner.

After the photo of Jaboo was posted to Facebook, outraged commenters called for harsh penalties to be given to the dog’s attacker, and to name him publicly.

‘People probably wouldn’t share offenders personal information if actual punishment more than a slap on the wrist was given out,’ one person said.

‘Great to hear they got him. Someone flog him,’ another said. 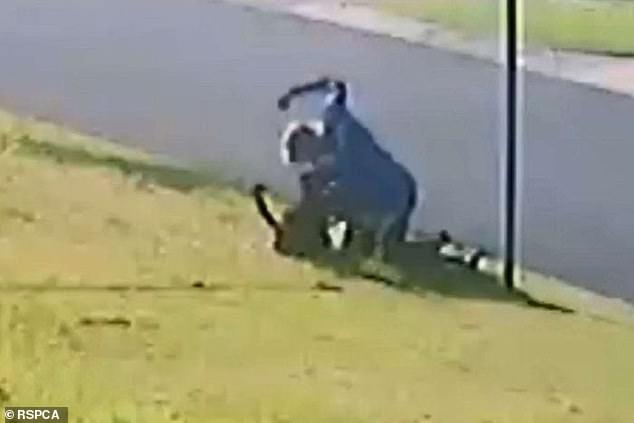 ‘[Fingers crossed] the magistrates do the right thing and give a proper sentence this time. Well done RSPCA Queensland for helping this poor dog get a chance to know love and comfort and safety at last,’ another person said.

RSPCA Queensland spokesman Michael Beatty said he was horrified by the footage.

‘Personally, I find the attack very disturbing, I mean the attack just went on and on,’ Mr Beatty said.

The incident prompted the RSPCA to release the disturbing CCTV footage to Facebook, in an attempt to identify the man.

‘What’s really disturbing is that it seems totally unprovoked — the dog didn’t act aggressively in any of the vision that we’ve seen and the dog had no idea what was going to happen when he went to the man,’ Mr. Beatty said.

The maximum penalty for animal cruelty under the Animal Care and Protection Act is three years in jail or a fine of up to $220,000. 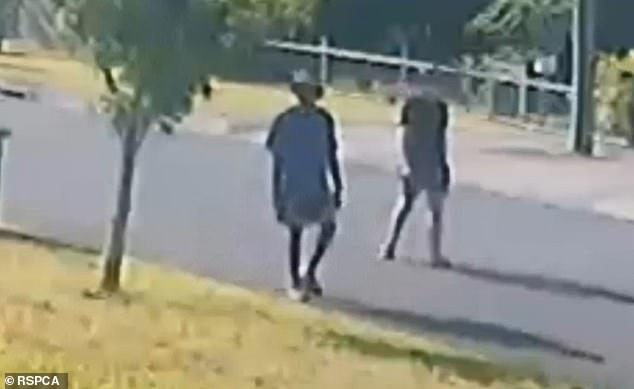 Two men were spotted walking on a suburban Mackay street, before one man unleashed an unprovoked punching attack on a dog passing by