Decades before Jack Dorsey became a titan of the technology industry with not one but two CEO titles to his name and an eye-popping $12billion net worth, he was a young man from St Louis who dabbled in modeling and aspired to become a fashion designer, or a massage therapist.

Now that Dorsey, 45, resigned as Twitter’s chief executive officer, the bearded billionaire with a penchant for nose rings, tie-dye shirts, long walks and fasting will have plenty of time to pursue his new passion: bitcoin-mining.

Dorsey still remains the CEO of Square Inc, the hugely successful financial payments company that he co-founded in 2010.

In recent years, Dorsey has been using his considerable public platform to proselytize about the merits of cryptocurrency, particularly bitcoin.

Next chapter: Twitter CEO Jack Dorsey resigned on Monday after 16 years with the company he co-founded. He is currently working on a new bitcoin-mining venture 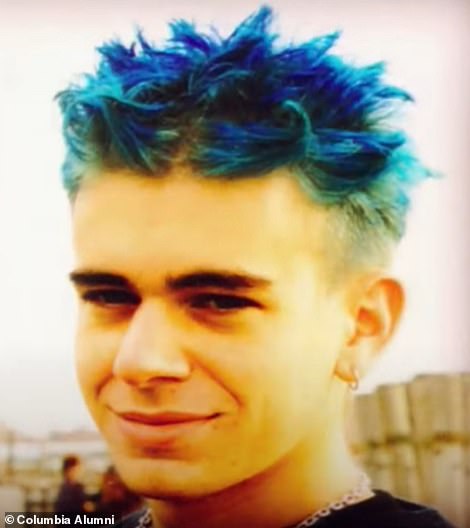 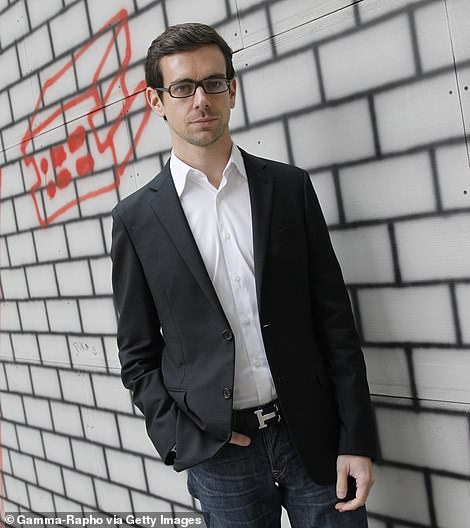 Dorsey got his start as a model before turning his attention to computer programming. He dropped out of NYU a month shy of graduating

In July, he announced that Square was launching a new bitcoin-based venture ‘with the sole goal of making it easy to create non-custodial, permissionless and decentralized financial services,’ he tweeted at the time to his 5.9million followers.

Square announced back in February that bitcoin makes up 5 per cent of its holdings.

HOW THE TWITTER CEO REVEALED HE MEDITATES FOR HOURS, ONLY EATS ONCE A DAY, FASTS ON WEEKENDS AND WALKS FIVE MILES TO WORK

In April 2019 it was revealed Dorsey manages stress through a strict diet and exercise regimen as well as quirky lifestyle habits like hours of meditation each day.

The then-42-year-old says his only daily meal is dinner, but he won’t eat at all on weekends.

He also claims to have ditched warm showers altogether and walks the distance between his home and the social media HQ in an effort to make sure his mind stays sharp.

Dorsey claims the routine makes his days feel longer and says he’s able to switch off to get ample sleep every night.

The tech boss shared details of his bizarre health regime in a March 15, 2019, podcast with Ben Greenfield Fitness.

‘During the day, I feel so much more focused. … You have this very focused point of mind in terms of this drive,’ Dorsey said about having his only meal between 6.30pm and 9pm.

He ditches food altogether for two days of the week and reintroduces calories into his diet with bone broth to prepare for the new week.

‘The first time I did it, like day three, I felt like I was hallucinating. It was a weird state to be in. But as I did it the next two times, it just became so apparent to me how much of our days are centered around meals and how — the experience I had was when I was fasting for much longer, how time really slowed down.’

Dorsey was vegan for two years but switched to the paleo diet after his mother pointed out he was turning orange from too much beta kerotine.

Speaking about starting his day with ice baths Dorsey added: ‘Nothing has given me more mental confidence than being able to go straight from room temperature into the cold.’

Dorsey has posted online about dealing with stress through Vipassana meditation during a 10-day ‘retreat’ where there’s no reading, writing, or devices allowed.

Square, which is headquartered in San Francisco, has three business lines: Cash App, Square Seller products and the music-streaming service Tidal, which it acquired from Jay-Z in April.

Square’s newest project, known as tbDEX, revolves around the idea of helping people seamlessly convert fiat currency – government-issued currency that is not backed by a commodity such as gold or silver – into bitcoin without having to go through multiple platforms.

‘We propose a solution that does not rely on a federation to control permission or access to the network; nor does it dictate the level of trust required between counterparties,’ the company wrote in a statement issued last week.

Speaking at the Bitcoin 2021 Convention, Dorsey said he hopes bitcoin can help bring about ‘world peace.’

In April, the billionaire entrepreneur announced the creation of a new charity fund, Star Small LLC, to help in the fight against the coronavirus pandemic. Dorsey said he would inject $1billion of his personal Square Inc equity into the charity, or about a third of his total fortune.

Some of the top beneficiaries of Dorsey’s largesse so far have included non-profit organizations founded or championed by a host of A-listers, including Beyonce and Jay-Z, Rihanna, Sean Penn, John Legend, Matt Damon and Bradley Cooper, as Bloomberg reported.

Dorsey’s open-handed approach to philanthropy has done nothing to diminish his lavish lifestyle.

The tech guru’s impressive real estate portfolio reportedly includes a spectacular $21million cliffside mansion and a ore humble $10million home, which are located next door to each other in the tony Sea Cliff section of San Francisco.

Dorsey’s newest property, which he spent hundreds of thousands of dollars renovating in 2019, features five bedrooms and three bathrooms.

Although Dorsey is one of the wealthiest men in the world, occupying the 173rd spot on Forbes’ 2021 list of billionaires, he has revealed himself as surprisingly ascetic and disciplined.

Dorsey previously said that he eats only one meal a day – dinner – and fasts on every weekend.

He takes ice baths to stay focused, walks 5 miles from his home to his office at Twitter headquarters, and practices meditation to help manage his stress levels, according to a March 2019 interview on the podcast Ben Greenfield Fitness.

Dorsey was born and raised in St Louis in a Catholic family, the son of a Midwestern businessman working for a company selling scientific instruments and a homemaker.

In his youth, Dorsey dabbled in vintage clothing modeling and created dispatch routing software used by taxi companies before enrolling in University of Missouri-Rolla. After more than two years, he transferred to New York University, but dropped out just one semester shy of graduating in 1997.

Dorsey conceived of the idea that would later turn into Twitter while still at NYU.

He moved to California to pursue a career as a programmer and launched his own company providing web-based dispatch services in 2000.

Around that time, Dorsey began exploring the idea of sending instant messages in real time to a small group of people, and approached a podcasting company called Odeo, where he met his future Twitter co-founders, Biz Stone and Evan Williams.

Dorsey and Stone build a prototype of Twitter in about two weeks, and the new service drew many users at Odeo before the company folded.

Dorsey took the reins of the company as CEO but continued pursuing his other passions, including fashion design and yoga, reported CNBC.

Dorsey would leave work at 6pm to take fashion design classes at Apparel Arts, a design school in San Francisco. His other hobbies included drawing and hot yoga.

At one point, Twitter co-founder Williams took Dorsey aside and warned him: ‘you can either be a dressmaker or the CEO of Twitter. But you can’t be both,’ according to Bilton’s book.

Twitter went through a period of robust growth during its early years, but as its expansion slowed the San Francisco company began tweaking its format in a bid to make it easier and more engaging to use.

In 2008, Dorsey was replaced by Williams as CEO but stayed on with the company as chairman of the board. He returned to the role of CEO in 2015 after Dick Costolo resigned.

In 2020, Dorsey came close to being ousted a second time by Elliot Management, an activist investor, amid concerns he had spread himself too thin by running both Twitter and Square, and announcing a temporary move to Africa.

Dorsey was able to hang onto the top leadership position by offering Elliot and another investment company, Silver Lake, a seat on Twitter’s  board.

In his goodbye letter addressed to Twitter employees on Monday, Dorsey said he has ‘worked hard to ensure this company can break away from its founding and founders’ and that to focus too much on whether companies are led by their founders is ‘severely limiting.’ 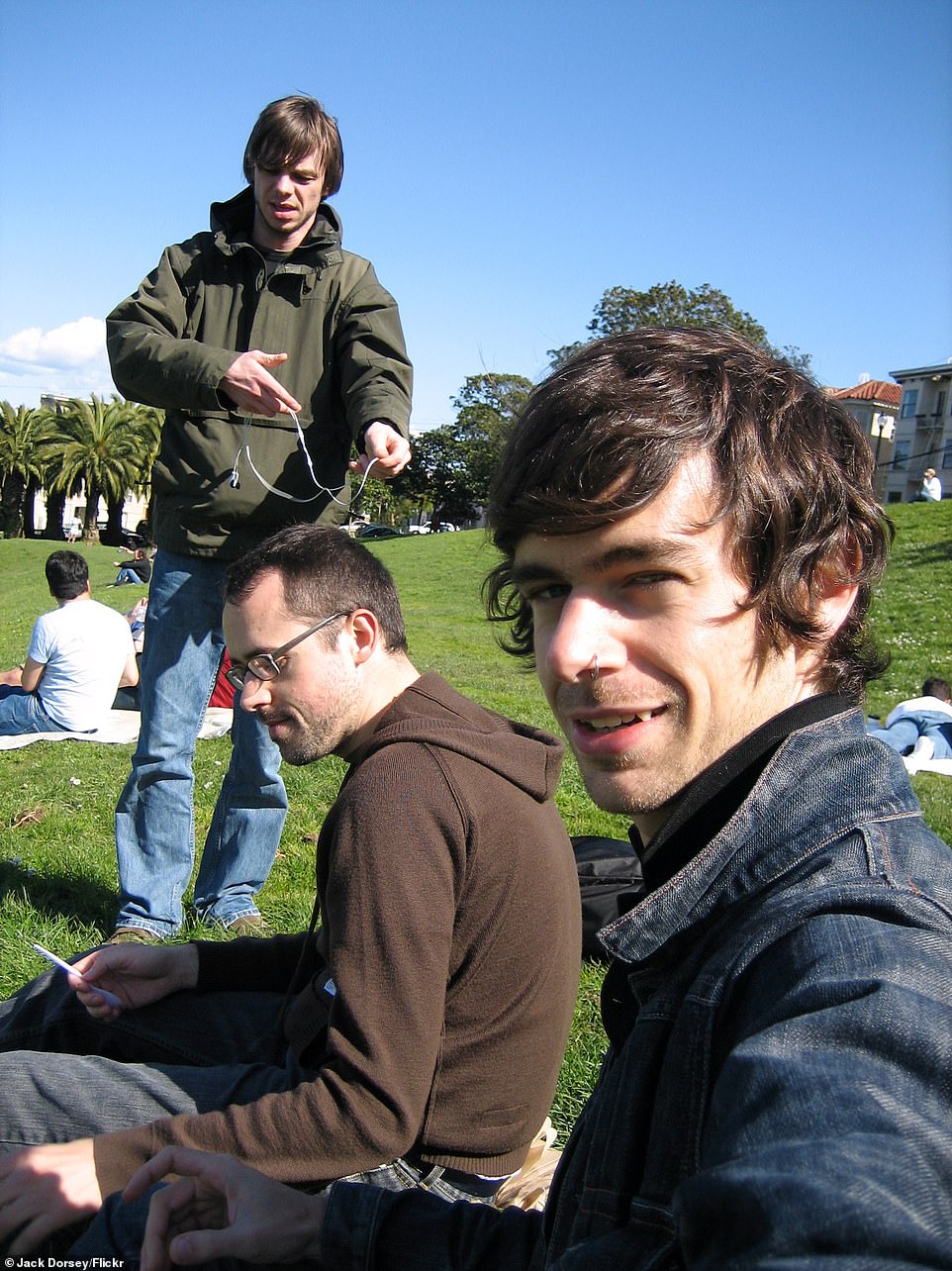 Dorsey wrote that he also will be leaving the company’s board around May 2022, saying that he wants to ‘give space’ to new CEO Parag Agrawal to lead.

‘I’m really sad… yet really happy,’ Dorsey wrote in the note addressed to his ‘team.’ ‘There aren’t many companies that get to this level. And there aren’t many founders that choose their company over their own ego. I know we’ll prove this was the right move.’