Jack Draper’s thrilling date with Novak Djokovic: EIGHT THINGS to get excited about for Wimbledon

Wimbledon’s thrilling first-round draw has whet the appetite just that little bit more for tennis fans ahead of the beginning of play on Monday.

The draw for the first round was conducted on Friday morning, and it has thrown up some absolute treats – including a tasty contest for British 19-year-old debutant Jack Draper against world No 1 Novak Djokovic.

Meanwhile, Andy Murray will be hoping to get off to a statement start against Georgia’s Nikoloz Basilashvili while on the women’s side of the draw, Serena Williams could come up against protege Coco Gauff in the fourth round.

And with plenty of talking points following the draw, Sportsmail has decided to take a look at the reasons for you all to be excited as one of sport’s most prestigious events gets ready to begin…

Draper got many fans talking last week after a strong showing at Queen’s Club, where he reached the last-eight of the competition before he eventually went out to fellow Brit Cam Norrie.

But Wimbledon represents a completely different kettle of fish for the 19-year-old big-serving left-hander, whose artillery impressed last week when he beat two top 40 players.

And ahead of the young Brit’s bow, he has been handed the dream draw against Djokovic, who is chasing a third consecutive Grand Slam title following his triumph at the French Open earlier this month.

To make it even more magical for Draper, he will come up against the reigning Wimbledon champion on the iconic Centre Court in front of the returning fans.

It will be the toughest test possible for Draper, but it’s a win-win situation to be in. Either way, he will gain vital experience against the formidable Serb and has the perfect chance to make a name for himself on the biggest stage. 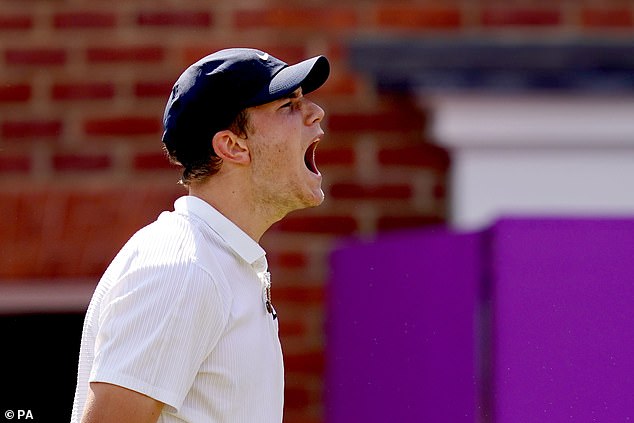 WHAT TO EXPECT FROM MURRAY?

Murray makes his long-awaited return to singles action at Wimbledon next week following a four-year absence.

And he has been handed a tough draw against big-hitting Basilashvili on Monday, with the Georgian currently ranked 28th in the world.

But he will be desperate to make a statement of intent against the 29-year-old at a tournament he holds ever so close to his heart following his two singles triumphs in 2013 and 2016.

There is plenty of hype surrounding his return to Wimbledon, and he will be eager to put on a show following a tough time at Queen’s – where he crashed out at the round of 16 stage against tournament No 1 seed Matteo Berrettini in straight sets.

Murray was understandably rusty during his defeat by Berrettini having gone three months without competitive singles action and limited sets in practice prior to Queen’s.

And he certainly won’t want talk to be dominated by his rustiness and fitness when he gets going at Wimbledon. 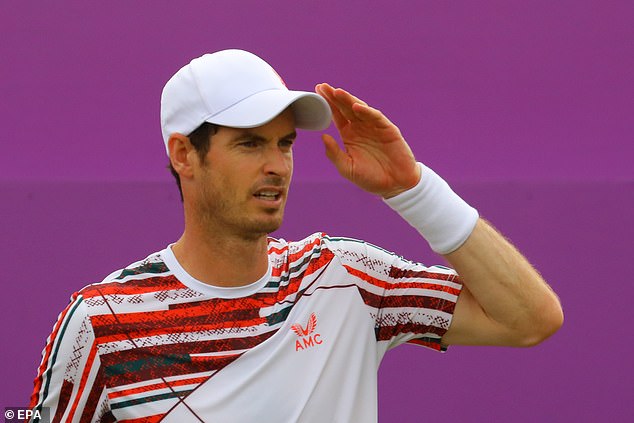 NORRIE HOPES THE STARS ALIGN FOR HIM…

British player Norrie is looking to go from strength-to-strength following his impressive outing at Queen’s.

The 25-year-old reached the final last week, where he agonisingly lost to Murray’s victor Berrettini in three sets after taking it to a decider.

But he more than shone and will be desperate to continue his fine form against a former top 20 player in Lucas Pouille, who has recently been struggling with long-term injuries.

If he gets past the Frenchman and squeezes through his second-round contest, Norrie could face the legendary Roger Federer in the third round. What an exciting match that would be for the Brit. 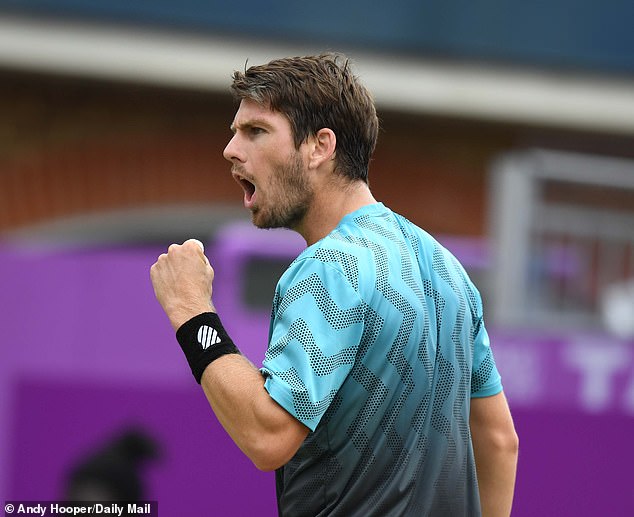 Cam Norrie, who reached the Queen’s final, could face Roger Federer in the third round

COULD THIS BE AN EMOTIONAL SWANSONG FOR FEDERER?

With 20-time Grand Slam champion Federer approaching 40 and injuries creeping up on him, there is the possibility that this could be his last ever Wimbledon appearance. And how emotional it would be.

Federer decided to withdraw from the French Open to prepare for a regular ATP Tour event ahead of Wimbledon, just moments after booking his place in the last-16 following victory over Germany’s Dominik Koepfer.

‘After discussions with my team, I’ve decided I will need to pull out,’ Federer said announced. ‘After two knee surgeries and over a year of rehabilitation it’s important that I listen to my body and make sure I don’t push myself too quickly on my road to recovery. I am thrilled to have got three matches under my belt. There is no greater feeling than being back on court.’

Fans will be hoping Federer – who is synonymous with Wimbledon thanks to his eight triumphs at SW19 – is now in tip-top shape ahead of his first-round contest against the flat-hitting Adrian Mannarino.

But with Djokovic in imperious form and with young pretenders on his tail, perhaps Federer – who announced himself at Wimbledon in incredible style 20 years ago with a thrilling victory over Pete Sampras – may see this as the perfect time to bow out. 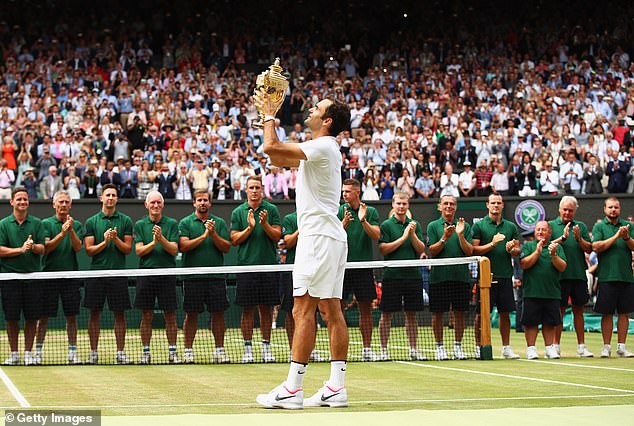 The charismatic Australian Nick Kyrgios opens up his Wimbledon campaign against France’s Ugo Humbert next Monday.

It will be a tough test for Kyrgios against the 21st seed at Wimbledon and it is certainly one to watch in the opening round at SW19 – for more than one reason!

The pair played out an epic contest that went all the way in the Australian Open earlier this year, with Kyrgios just about edging past his opponent in the second round having been behind 2-1 in sets.

But while we hope to witness another thriller between the duo, as always fans can look forward to seeing what Kyrgios turns up at Wimbledon.

Will the mesmerising player on his day rock up, or will we see him serve up even more antics that have overshadowed his performances in the past? Only time will tell… 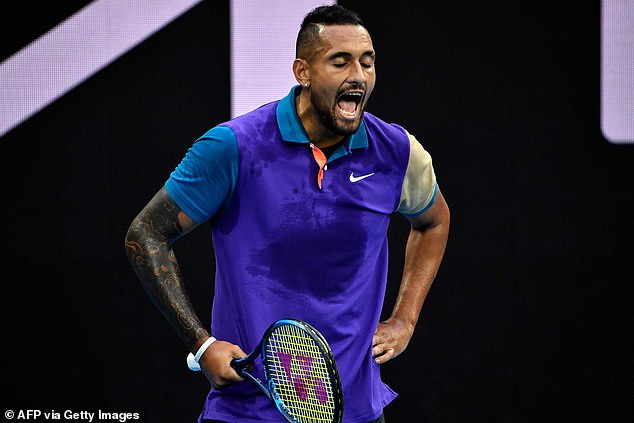 Fans can expect fireworks from Nick Kyrgios, who begins against Ugo Humbert, at Wimbledon

CAN SOMEONE FINALLY DETHRONE DJOKOVIC?

Djokovic heads into Wimbledon as heavy favourite having followed up his Australian Open triumph with victory at the French Open earlier this month.

Djokovic showed his champion’s mentality to come from two sets down in the Roland Garros final to leave Stefanos Tsitsipas waiting for his first Grand Slam title, and putting himself within one of Federer and Rafael Nadal’s record-breaking haul of 20 crowns.

You would be a brave man to bet against Djokovic from making it 20 Grand Slam crowns next month, with his domination looking likely to continue.

Speaking of utter domination and on a slightly unrelated note, you have to date back to 2002 since Wimbledon was won by none of either Djokovic, Federer, Nadal or Murray. Australia’s Lleyton Hewitt was the man who conquered back in 2002.

And that trend looks set to continue over the next fortnight. However, can one of the young pretenders finally dethrone Djokovic and Co?

The likes of Berrettini, Tsitsipas, Daniil Medvedev and Andrey Rublev will be desperate to have a say… 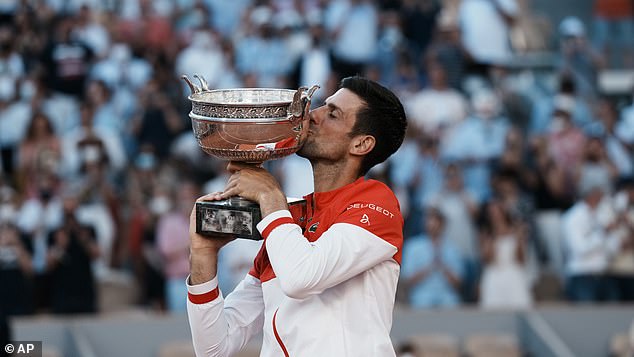 SERENA’S BID FOR HISTORY GOES ON

At the age of 39, and having not won a grand slam since 2017 at the Australian Open, time is running out for Serena Williams to make even more history in her illustrious career.

Williams for a while now has been bidding to equal and surpass Margaret Court’s astonishing record of 24 grand slam titles.

The American great has been idling on 23 for the past four years, and needs one more to tie the Australian tennis legend and two to surpass the record.

And with Simona Halep out of the equation following her last-minute withdrawal from Wimbledon due to a calf injury, Williams will feel she has that slight bit more chance to write another chapter in the history books.

Williams opens up against Aliaksandra Sasnovich of Belarus, the world No 100, and will be hoping for a relatively plain-sailing journey through Wimbledon until the tournament reaches crunch time. 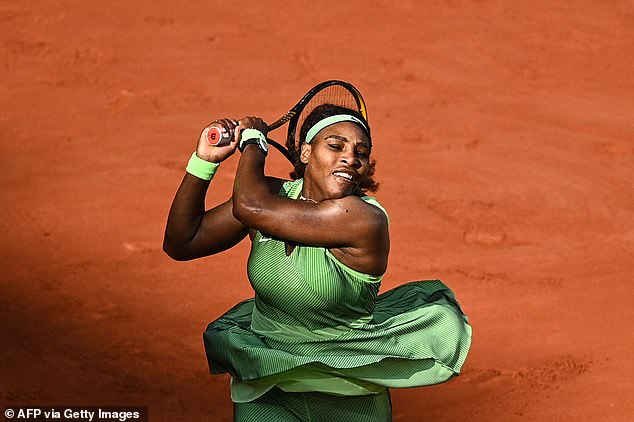 SERENA VS GAUFF IN THE PIPELINE

While there are some enthralling first-round draws, there are also some we can dream of delving further into the tournament.

Coco Gauff has been drawn against British wildcard Francesca Jones in the opening round at SW19, but a very exciting contest potentially lies in store.

If Gauff and her idol Williams sail past the first three rounds, the duo could face each other for the first time ever in the fourth round.

It won’t be a straightforward path to the fourth round for the pair, but eyes are already gazing to what could come between the master and the apprentice. 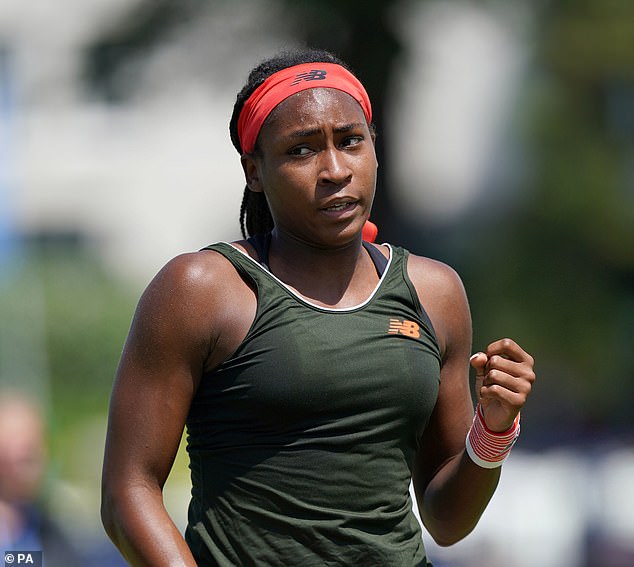