City retained the English top-flight title on Sunday in a dramatic final day – coming from two-nil down against Aston Villa to win 3-2 to pip title rivals Liverpool by a point.

The 26-year-old was at the centre of attention in City’s title parade and is showing no signs of slowing down his wild celebrations as he was pictured on a private jet heading to Ibiza.

Wayne Lineker, owner of O Beach Club in Ibiza, has also posted on Instagram alongside Grealish with the caption of ‘here he is’.

His trip to Ibiza will see him continue on from a few days of heavy drinking, which started in the streets of Manchester as Grealish led the celebrations after the final day of the season on Sunday.

Clearly enjoying himself throughout, as he should, a hoarse Grealish – who toasted City’s success by drinking beers and appearing to have vodka cokes too – embarked on some light-hearted banter with his team-mates about the key to their success. 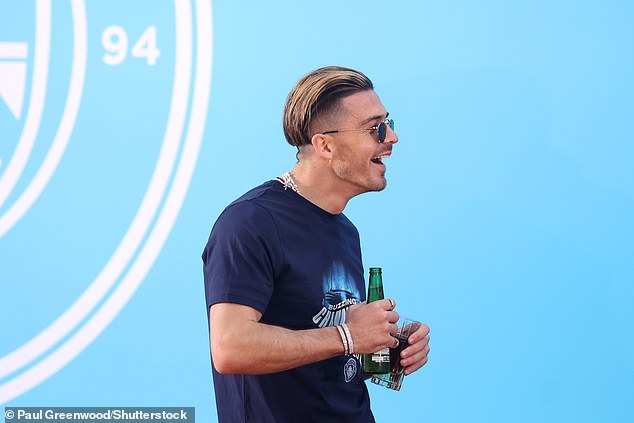 Bernardo Silva and Riyad Mahrez were in the firing line of the England international as he took friendly jabs about their displays against Aston Villa – with Newcastle’s Miguel Almiron randomly caught in the collateral of it all.

Silva and Mahrez both started Sunday’s clash but were below-par their usual high standards – with Grealish comparing the latter’s display to the equivalent of Newcastle’s No 24.

Mahrez was substituted on 56 minutes and replaced by Raheem Sterling at 1-0 down, while Silva was replaced by Ilkay Gundogan 12 minutes later.

Both substitutions by manager Pep Guardiola proved to be inspired as Sterling set up Gundogan to reduce the deficit to 2-1, while the latter then scored the winner to seal City’s fourth Premier League title in five seasons.

And teasing the pair, a jovial Grealish reminded them of those changes. 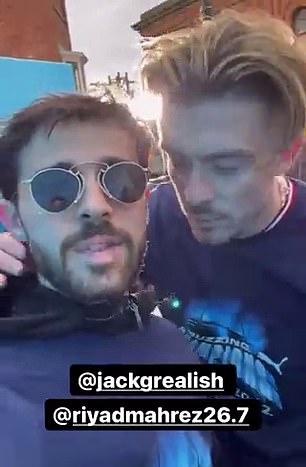 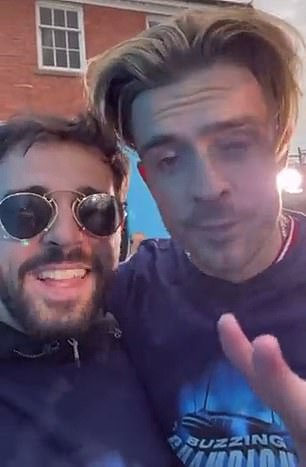 Pulling Grealish alongside him for his Instagram story – which also featured Kevin De Bruyne – Silva asked him what were the secrets to their success against Villa.

With a huge smile on his face he did not hesitate before saying: ‘There were two secrets… number one, Riyad, take him off the pitch, as soon as possible. He played like Almiron yesterday.

‘Number two, [pointing at Silva] he’s been so good this season, get him off the pitch.’

The Portuguese then came up with a third secret, adding: ‘Number three… keep Jack Grealish on the f****** bench.’

Silva’s shot back at Grealish caused the pair to crack up laughing – with the latter not coming on against his former club on Sunday.

This wasn’t the first friendly pop Grealish had at Silva as earlier in the day during a live stream of the festivities he said: ‘Do you know what?’ I said earlier on the coach, it’s been brilliant to win my first title. 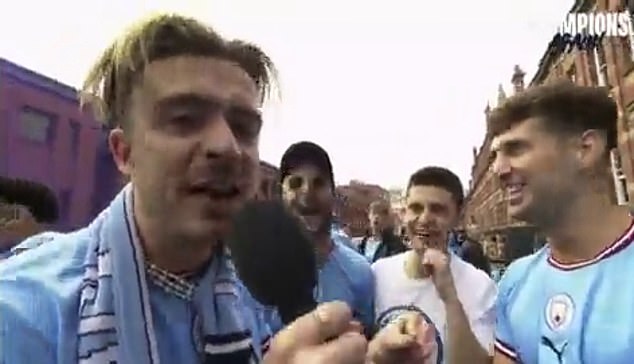 ‘I want to thank everyone, but the main person I want to thank is Bernardo Silva for coming off in the [68th] minute, because he was miles off it yesterday!’

Having taken a jibe at Silva, Mahrez and Almiron – City’s No 10 also mocked Kyle Walker too.

Walker was asked by Mahrez whether anybody has beaten him in a one vs one situation during his career.

‘Who did actually beat you in one vs one?’ Mahrez asked Walker before questioning if PSG pair Kylian Mbappe and Neymar have.

Walker responded: ‘I don’t know’ but before he could finish his answer, Grealish was quick to nip in.

‘Me when I was at Aston Villa. That’s why Pep Guardiola signed me,’ he said with a smirk on his face.

Grealish’s taunt caused the City boss to keel over laughing – having signed him for £100million from Aston Villa last summer.

While Grealish is off partying, his girlfriend, model Sasha Attwood has been on a shoot with PrettyLittleThing. 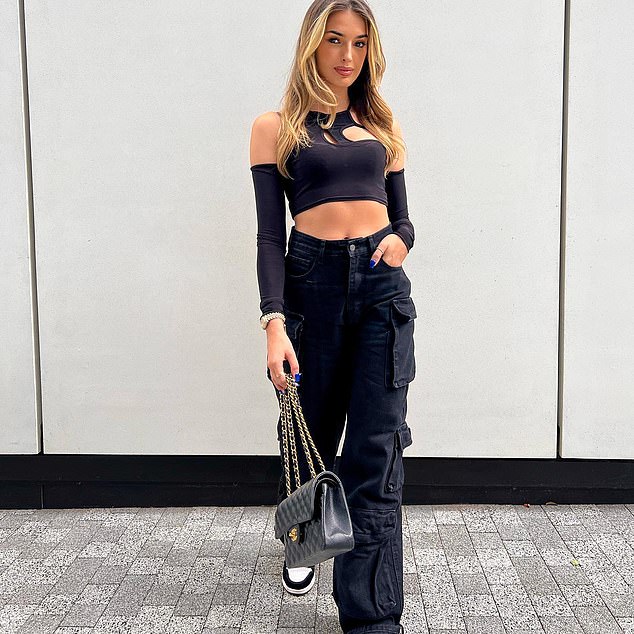 Grealish is off partying, his girlfriend, Sasha Attwood has been on a PrettyLittleThing shoot