Jacob Rees-Mogg BANS his staff from using ‘got’, ‘very’ or ‘equal’ in new Leader of Commons office

Jacob Rees-Mogg issues list of rules to his new staff BANNING them from using ‘got’, ‘very’ or ‘equal’ and demanding they refer to ‘non-titled males’ as ‘Esquire’

The new Leader of the House of Commons has issued a set of rules for staff which bans words such as ‘hopefully’ and ‘disappointment’.

Jacob Rees-Mogg, who was brought into the Government by Boris Johnson on Wednesday, wasted little time in issuing the guidance to staff.

According to the style guide obtained by ITV News, Mr Rees-Mogg insists that all non-titled males are given the suffix Esq and imperial measurements should be used.

In a call for accuracy he tells staff: ‘CHECK your work.’

Jacob Rees-Mogg, new Leader of the House of Commons, has issued a set of rules for staff which bans words such as ‘hopefully’ and ‘disappointment’ 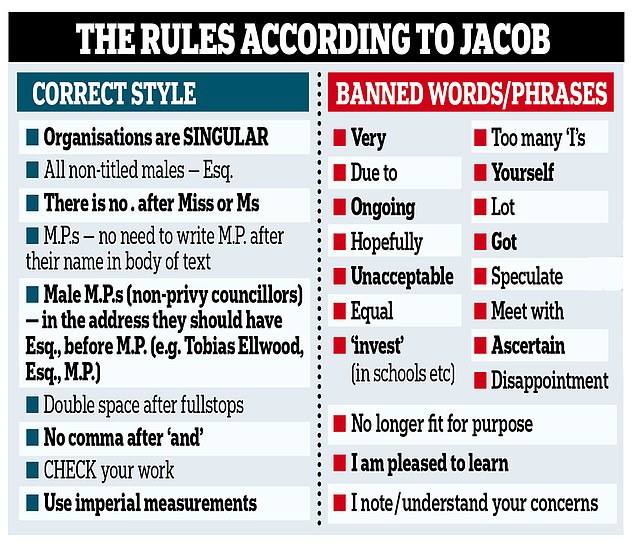 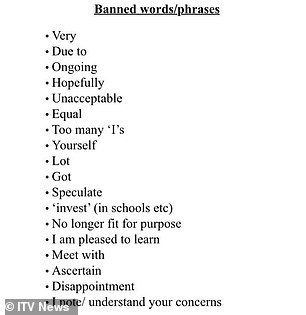 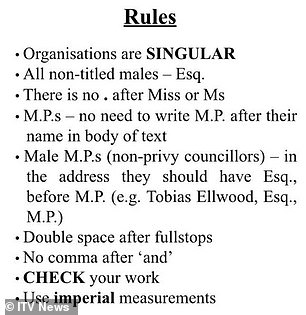 Mr Rees-Mogg issued the guidelines to staff after less than a week in his new role. He has banned words such as ‘lot’ and ‘got’ and insists on the use of imperial measurements

Other directions include a call for a double space after full stops and no comma after the word ‘and’.

He also set out a series of banned words and phrases that should not be used by his staff.

They include: very, due to, unacceptable, equal, yourself, lot, got, speculate, meet with, ascertain and disappointment. 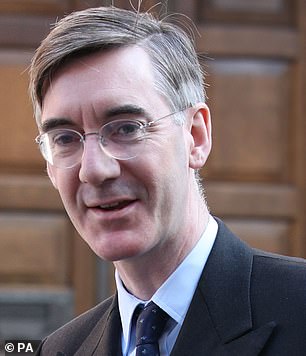 Staff should avoid ‘too many ‘Is” in their writing.

And Mr Rees-Mogg has demanded that phrases such as ‘pleased to learn’ and ‘no longer fit for purpose’ are dropped from staff’s vocabulary.

Asked on his LBC show about the ban on certain words, Mr Rees-Mogg said: ‘These are for my letters.

‘And when you read through a letter you see something that says ‘it was very important’, but, probably not actually, it’s probably just important.

”Unacceptable’ is a dreadful, weasel word. Such an ugly word.

‘It is used when people mean ‘wrong’ but they don’t have the courage to say so.

Mr Rees-Mogg said that he was no longer being paid to present the LBC phone-in programme because he had become a Government minister.

He first entered Parliament in 2010. A stickler for formal dress and tradition, many observers wryly note that he appears to come from another time.

His other children’s full names include Alfred Wulfric Leyson Pius, Thomas Wentworth Somerset Dunstan, Peter Theodore Alphege and Anselm Charles Fitzwilliam. Despite his growing family, the Oxford-educated MP has admitted to never changing a nappy – because he is not a ‘modern man’, adding: ‘The nanny does it brilliantly.’

As for errant staff who blot their copy book with sloppy grammar, perhaps the Old Etonian will deploy a suitably Victorian punishment… and make them wear a dunce’s hat.