Conservative backbenchers warned the PM that they do not want to see her ousted from Number Ten, but warned her that she must chuck her under-fire Brexit plan.

Their comments, at a packed fringe meeting at the Tory Party conference in Birmingham, piles yet more pressure on Mrs May who is facing a Tory revolt on Brexit.

It came after Boris Johnson branded her plan ‘deranged’ and former Brexit Secretary David Davis toured the television studios and fringe events to urge her to ditch it.

Mrs May has just a month to come up with a Brexit plan that she can get her warring backbenchers and the EU to back.

But the sheer level of anger many Tory activists feel towards Chequers was laid bare tonight as hundreds queued up around the conference centre to hear MPs tear into their leader’s plans – with many unable to get a seat and turned away.

Inside, half a dozen leading Tory Brexiteers piled into the PM’s vision for Brexit, which they warned would leave Britain ‘shackled’ to the Brussels bloc.

Mr Rees-Mogg, chairman of the European Research Group – the powerful group of backbench Eurosceptic Tories – was met with thundering applause as he lashed the plan.

Michael Gove today told how he worries about the prospect of Britain crashing out of the EU without a deal.

Speaking at a fringe event at the Tory Party conference, he said that he thinks getting a dal would be far better.

He said: ‘I do worry about it. I do think a deal will be much much better.

‘I think if we left without a deal I think we and the EU would put in place all sorts of arrangements in order to make sure the imapct was mitigated.

‘But it is certainly not my favorite option.’

He said that the Government has been engaged in no deal planning, and said a no deal Brexit would no have to be damaging for the eocnomy.

But he added: ‘It would certainly be disruptive initially and it would be a difficult period…

‘We in government are preparing for every eventuality but it is certainly not something I would contemplate glad of heart.’

He said Chequers is ‘simply remaining under the yoke of the European Union’.

He added: ‘It is a dying duck in a thunderstorm, it is the deadest of dying ducks.’

Mrs May has insisted her Chequers plan is the only viable proposal on the negotiating table and the alternative would be a no deal Brexit.

But Mr Rees-Mogg said there is ‘nothing to fear’ from crashing out of the EU without a deal and trading on world trade organisation terms as it would mean that Britain would not have to pay a ‘farthing’ of the £40billion Brexit Bill.

He added: ‘And we would be able to immediately get on with trading with the world…we would not have 21 months of vassalage where we have to be told what to do by the European Union and have no say in what was happening.’

In a rallying cry to the 500 or so activists in the hall, the Tory MP added: ‘Making a success of Brexit is easy as long as we hold our nerve.

‘We either leave on supercalifragilisticexpialidocious terms – we want a super Canada Brexit, and to be positive about this.

‘And I can’t be more positive than supercalifragilisticexpialidocious – which as you all know is a word developed by a nanny and nannies are jolly good things.

‘If we don’t do that we leave on World Trade terms and then we have a proper, red-blooded Conservative approach to governing that frees the UK from being tied down.’ 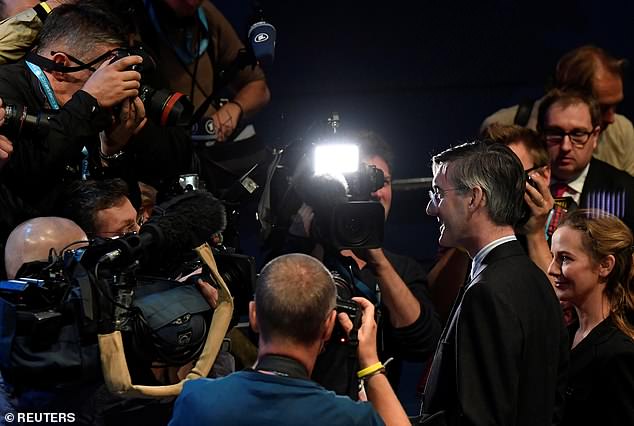 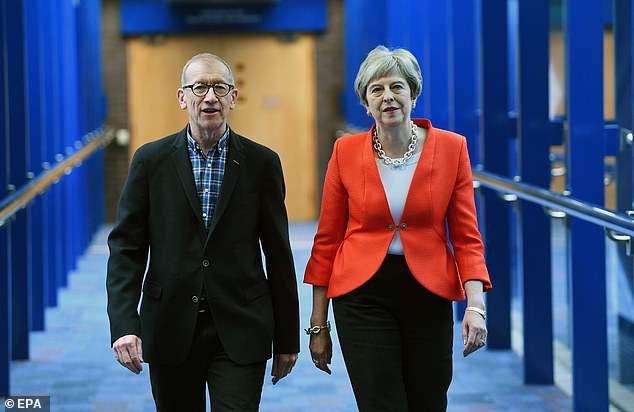 And deploying his trademark colourful language, Mr Rees-Mogg said Britain should be inspired by the hero Gulliver in the famous novel Gulliver’s Travels.

He said: ‘Ladies and gentlemen, we have been Gulliver, let us cut the rope the Liliputians have tied on to us and let us show our giant form once again

Mr Rees-Mogg’s was met with a thunderous round of applause and a standing ovation at the packed-out fringe.

Tory MP Conor Burns was also cheered as he took to the stage to pile in, saying that ‘if Chequers had a slogan it would be – Not in Europe but run by Europe’

He added: ‘I say this in a spirit of affection towards the PM, Prime Minister, we don’t want to change you, we want to change the policy of Chequers. Please, please.’ 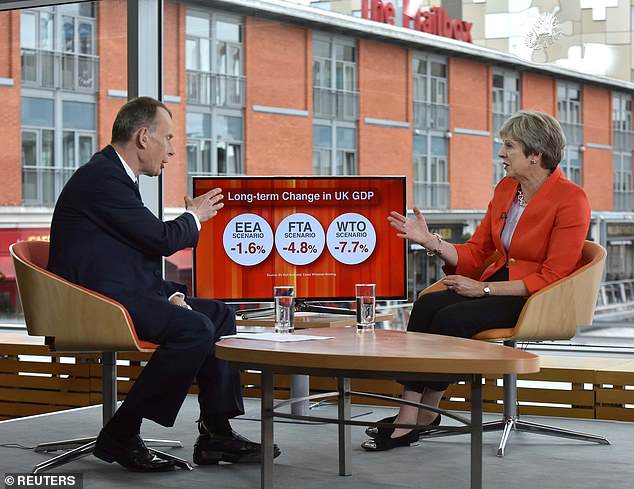 He said: ‘If we as Conservatives do not deliver on Brexit as we promised , as the public voted we will lose seats like Mansfield and Middlesborough and usher in the chaos of a Corbyn government.

‘Chequers is an unmitigated disaster.’

Former International Development Secretary Priti Patel said that Chequers would not fulfill the promise of the Brexit vote.

She said: ‘It is not going to give us our freedom or democracy. Chequers will leave us rule takers.’

And she took a swipe at Britain’s Brexit negotiating team, saying: ‘There are many people who are involved in these negotiations who lack confidence in our country.’