Hardline Brexiteer Jacob Rees-Mogg has bought a £5 million home next to Parliament, fuelling speculation that the ambitious MP is positioning himself as the next Tory leader.

The five-storey mansion is even closer to the House of Commons than Downing Street is – and until recently was the political HQ of pro-Tory tycoon and power-broker Lord Ashcroft, a supporter of Mr Rees-Mogg.

The disclosure came amid fresh evidence of a possible threat to the Prime Minister by Mr Rees-Mogg’s allies – who fear Theresa May is determined to block their plea for a so-called ‘hard Brexit’.

And it comes as a Mail on Sunday investigation into Mr Rees-Mogg’s City firm reveals a string of Russian investments – but virtually no stake in the British economy.

The MP’s company, Somerset Capital Management, which manages nearly £7.5 billion on behalf of wealthy private investors and City institutions, has interests in two Russian firms blacklisted by the US and others which are controlled by oligarchs in President Vladimir Putin’s inner circle.

The Russian assets were valued at £217 million on Friday.

Mr Smith pointed out the absence of a Tory majority in the Commons made it hard for Mrs May to speed up Brexit laws, saying: ‘It’s all about numbers.’

It was a menacing reference to the 48 Tory MPs needed to trigger a leadership contest.

Although he is a backbench MP, Mr Davies is the live-in partner of Work and Pensions Secretary Esther McVey, seen by some as another potential Tory leader. He said last night: ‘I don’t comment on my discussions with the Chief Whip.’ 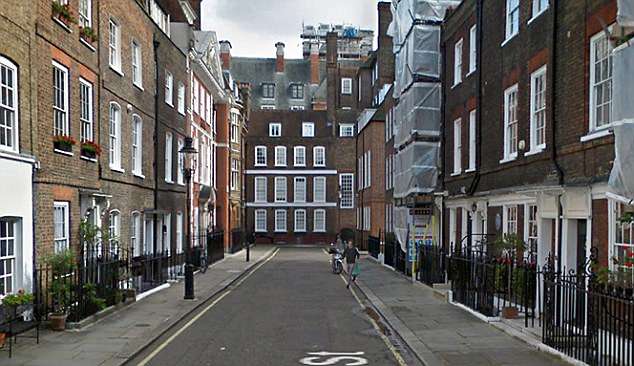 Pictured: The MP is moving into Cowley Street, in the historic ‘Old Westminster’ quarter

Mr Rees-Mogg – the bookies’ favourite to succeed Mrs May – has been urged by members of his pro-Brexit European Research Group (ERG) to be tougher in his dealings with the Prime Minister.

The revelation about Mr Rees-Mogg’s new Westminster base comes as No 10 prepares for a series of Commons showdowns over Brexit next month.

After last week’s ‘summit’ between Mr Rees-Mogg’s ERG and Chief Whip Mr Smith, the Government agreed to bring forward key votes on the EU Withdrawal Bill to the middle of next month.

The move was forced by the Brexit rebels because they believe they have the numbers to ‘crush the Remainers’.

Mrs May’s allies fear that Brexit MPs are preparing to challenge her if she fails to give in to their demand to take a tougher stance with Brussels.

Conservative chiefs have warned that with no Commons majority, any such instability could lead to a General Election – the third in four years – and risk putting Jeremy Corbyn in No 10.

Mr Rees-Mogg dismissed claims that he planned to use his new house – dubbed ‘Jacob’s own No 10’ by one Tory MP wag – as a leadership campaign headquarters.

He said: ‘I bought it because I have six children. My Mayfair house has three bedrooms for nine people so reception rooms now have children in them.’

He is not the only Tory ‘big beast’ who appears to be repositioning himself.

According to one report yesterday, Tory grandees are plotting for Environment Secretary Michael Gove to replace Mrs May as a caretaker PM after Brexit next March, then hand over to popular Scottish Tory leader Ruth Davidson in time to lead the party into the 2022 General Election.

Mr Rees-Mogg’s supporters want Mrs May to ‘strike now’ and ram through the Brexit laws while Mr Corbyn’s Commons voting strength is down.

Lewisham East Labour MP Heidi Alexander has resigned and another Labour MP is gravely ill and is unlikely to be able to vote.

By Glen Owen, Deputy Political Editor for The Mail on Sunday

Jacob Rees-Mogg new power base sits in a historic quarter of ‘Old Westminster’ which has been thick with plotters for centuries.

The Somerset MP paid £5.625 million for the property in Cowley Street earlier this year, part funded by a mortgage from the Queen’s bank, Coutts & Co.

It became vacant after pro-Brexit former Tory deputy chairman Lord Ashcroft, who had been renting the building to house his varied political and business operations, moved out.

The five-storey 18th Century building is closer to Parliament than Downing Street, lying just 390 yards from the Commons.

It is also a mere 500 yards from Tory campaign HQ and only 100 yards from the Westminster studios of the main broadcasters. 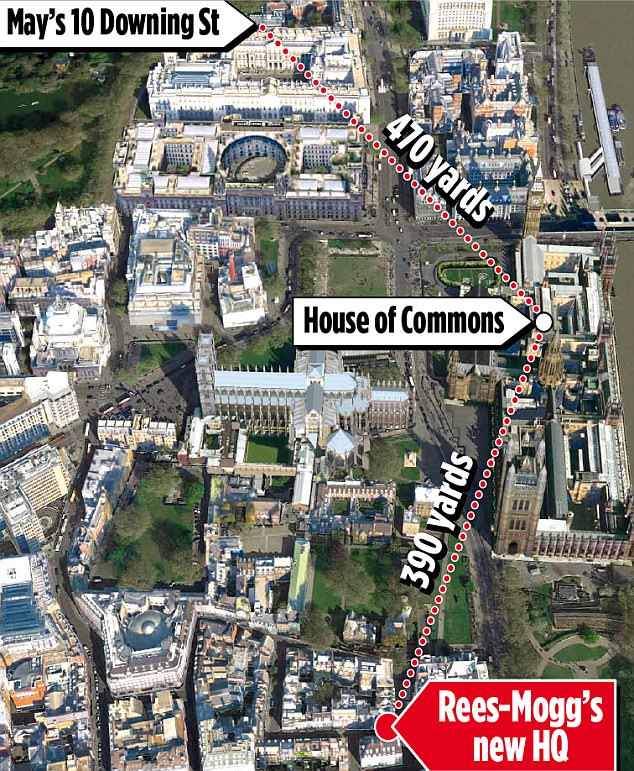 A map shows Rees-Mogg’s new home, which he is believed to be moving into with his family in August, in relation to the House of Commons and Downing Street

Houses and offices in this road are traditionally fitted with the division bells which summon MPs to vote, as they are near enough for MPs to reach the Commons chamber within the required eight minutes.

It means Mr Rees-Mogg will have the luxury of being able to relax at home between late-night votes.

Mr Rees-Mogg, who has six children with his wife Helena, is expected to move into the house at the end of August, after he has finished a refurbishment.

Local planning documents show it includes the installation of surprisingly modern touches such as ‘walk-on rooflights’ over his basement.

The estate agent which advertised the house for £6 million purred about the potential for ‘five bedrooms, four reception rooms, four bathrooms, and significant family kitchen’, concluding: ‘This would make a substantial and desirable London home.’ 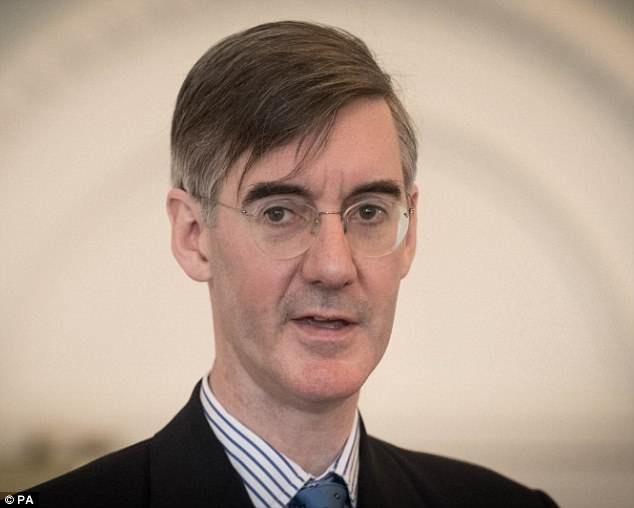 Rees-Mogg’s new home used to belong to Lord Ashcroft, a supporter of the backbencher’s

Cowley Street is where Prime Minister John Major based his campaign in 1995, when he quit as Tory leader and invited MPs to challenge him, telling Eurosceptic opponents to ‘put up or shut up’.

Michael Portillo was revealed as a plotter after he was caught installing phone lines in a secret campaign HQ in Lord North Street – a one-minute walk away – to challenge Major if the contest went to a second round.

In the 2001 Tory leadership battle, the same Lord North Street house was used by the victorious Iain Duncan Smith.

Mr Rees-Mogg’s house is also just feet from the building which the Liberal Democrats used as their HQ until 2011.

Lord North Street has been described as ‘reeking of political intrigue’, hosting political salons since the days of Disraeli.

It is where Winston Churchill went to plot against Neville Chamberlain in 1940; and in the 1970s, former Labour Prime Minister Sir Harold Wilson claimed that his townhouse at 5 Lord North Street had been bugged by MI5.

Now a new chapter of intrigues appears to be opening up.