Jacob Rees-Mogg today called for all MPs to physically return to the House of Commons in June as he said they cannot ‘hide away’ because of coronavirus.

The Commons is currently using a ‘hybrid’ set up which allows 50 MPs to attend proceedings in the chamber while up to 120 can take part remotely using Zoom video conferencing software.

But Mr Rees-Mogg, the Commons Leader, said MPs have a ‘responsibility’ to return to Westminster after the Whitsun recess which ends on June 2.

His comments sparked an immediate political firestorm as MPs questioned how it would be possible to safely stick to social distancing rules if they all come back at the same time.

Meanwhile, Sir Lindsay Hoyle, the Commons Speaker, insisted he will suspend Commons proceedings if he believes they are too crowded. 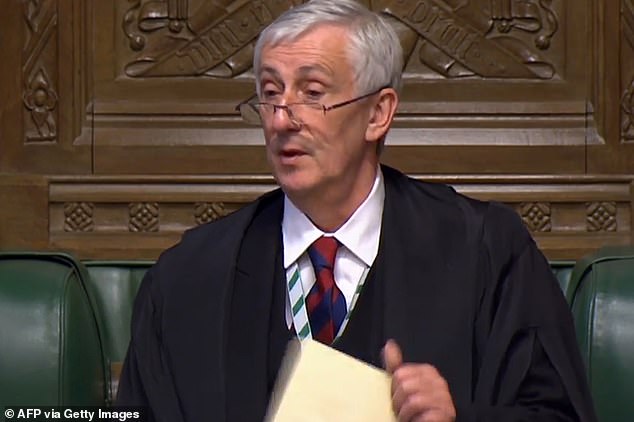 But Sir Lindsay Hoyle, the Commons Speaker, has warned social distancing measures must be stuck to

Many MPs want the ‘hybrid’ arrangements to continue for the foreseeable future to give them flexibility over where they work and to ensure the two metre rule can always be adhered to.

But Mr Rees-Mogg has accused opposition MPs of trying to ‘hide behind a veneer of virtual Parliament’.

He told the Commons: ‘The idea that our democratic system is not an essential one, is not the lifeblood of our nation, is not how the Government is held to account at a time of crisis, is one that I think is surprising and extraordinary that it should be held by members of the opposition.

‘That they should not wish to be here challenging the Government, holding them to account, that they wish to hide behind a veneer of virtual Parliament so that legislation is not progressed with.’

Mr Rees-Mogg suggested MPs needed to set an example to the rest of the nation as the coronavirus lockdown is eased and people are encouraged to return to work.

He told MPs: ‘The intention is for schools to go back. How can we say to our schoolchildren, “you’re safe going back”, some of them, but that we’re not, that we’re going to hide away whilst schoolchildren are going back – is that the right message to give to our constituents?

‘Are we a people set apart, a special class who are exempt from what the rest of the country are doing? No, we are not, we are the leaders of our nation and we have a responsibility, that responsibility falls on us to come back.’

Mr Rees-Mogg insisted it would still be possible to observe social distancing during debates and votes.

But Sir Lindsay sounded a cautious tone as he said he would not allow an unsafe return of Parliament.

‘My priority and the priority of all, I’m sure, is to ensure that those on the estate are safe while business is facilitated,’ he said.

‘I’m working with parties, the Commission to ensure this duty of care is taken seriously.

‘Nothing in the Leader’s announcement changes the position on social distancing in and around the chamber and throughout the parliamentary estate – only changes to the guidance from Public Health England can do that, I think we’re all agreed on that.

‘I may suspend sittings between items of business to allow safe access to and exit the chamber. I’m also quite prepared to suspend a sitting if I believe the safe number of honourable members in the chamber risks being exceeded.’

Sir Lindsay also warned votes in person could take 30 minutes to complete or even up to an hour so that MPs can safely walk through the division lobby without being too close to their counterparts.

Prior to the lockdown, MPs had eight minutes to cast their votes and the result would follow a few minutes later.

Electronic voting, which takes 15 minutes, with the result announced later, was used for the first time on Tuesday but some MPs want a swift return to the traditional use of voting lobbies.

Mr Rees-Mogg, speaking after Sir Lindsay’s statement, said: ‘It is obviously important that this House maintains social distancing in accordance with the guidelines.’

The SNP’s shadow Commons leader Tommy Sheppard said it was a ‘fantasy’ to believe that physical sittings could resume from June 2 without special procedures being in place.

He said: ‘How can 650 Members of Parliament possibly work safely in a building of this size and layout?’

Tory MP Michael Fabricant also hit out at Mr Rees-Mogg’s plans as he said a full physical return ‘should only happen when it is safe to do so and not based on some arbitrary date endangering the 1000s of staff who work in the cramped conditions of Parliament’.

He said in a statement: ‘For Parliament to return in full, safely, there must be proposals in place to limit the number of people working at any one time, and to protect those who have to work.

‘The supply of appropriate PPE must be included in these proposals.’