Jacqueline Jossa didn’t tell her husband Dan Osborne that she was moving to a new house, according to reports.

Amid claims the EastEnders star’s marriage to Dan has become ‘unworkable’ during the coronavirus lockdown, a new report claims Jacqueline has signed a six month lease on a new home after secretly moving out.

Both Jacqueline and Dan shared Instagram photos from their Sunday evenings at their homes, as the actress snapped a selfie with the couple’s daughter, and Dan spent time with his son Teddy.

New home? Jacqueline Jossa didn’t tell her husband Dan Osborne that she was moving to a new house, according to a new report, amid claims the couple’s seven year marriage is in trouble

A friend told The Sun that Dan assumed his wife would stay with her parents after she decided to move out: ‘Jacqueline didn’t tell Dan where she was moving to. He thought it would be with her parents,’ claimed the source.

‘But instead she’s staying at another property and has signed a six-month lease.’

The insider went on to claim that the source of the couple’s rows have been his ‘flirty messages’ to other women.

‘Dan’s sworn to her on so many occasions he’s going to change his ways but just can’t help himself messaging other women,’ said the friend. 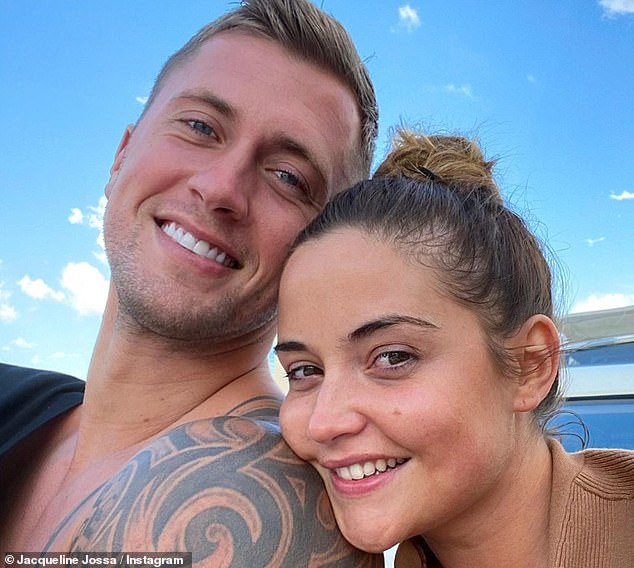 Troubles: Amid claims their marriage has become ‘unworkable’ during lockdown, a new report claims Jacqueline has signed a six month lease on a new home after secretly moving out

On Sunday Jacqueline returned to work to promote her pyjamas range, posting a snap of herself showcasing an orange polka dot design from her PJ range with In The Style and appeared to put her personal troubles behind her as she grinned at the camera.

Giving no hint of recent relationship woes with Dan, 28, Jacqueline wrote alongside the photo: ‘girls, my gorgeous @inthestyle nightwear is back tomorrow and if you download the @inthestyle app then you get access at 6pm one hour before everyone else!

‘I’ve been living in them and love them all, they sold out in a few minutes last time so make sure you get the bits you want at 6pm tomorrow x’. 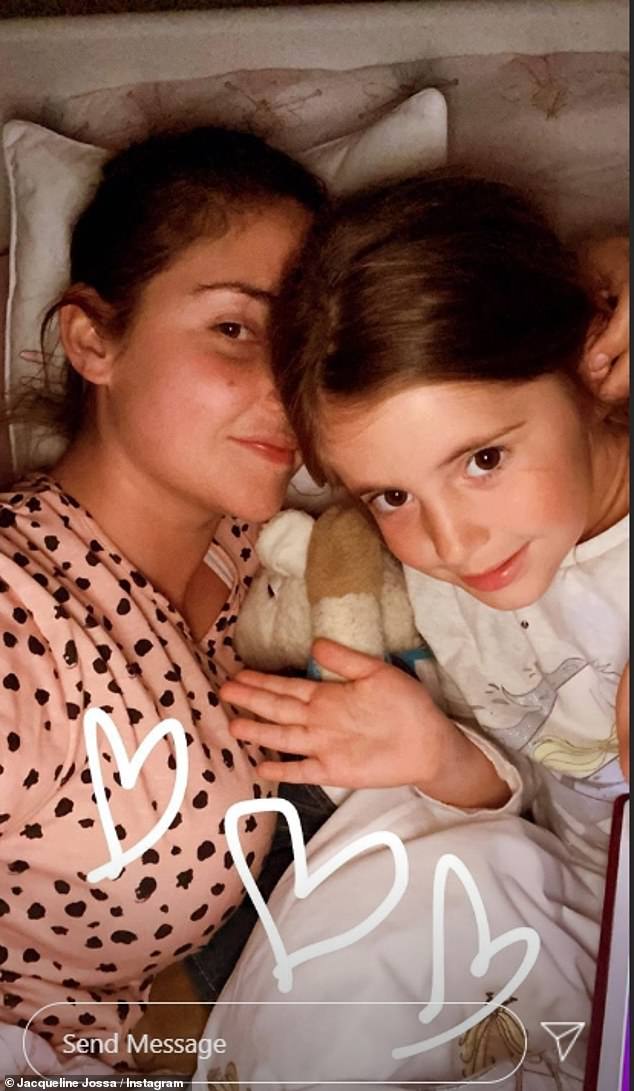 Family: On Sunday Jacqueline returned to work to promote her pyjamas range and shared a selfie with her eldest daughter Ella, five

She later cosied up in bed with her and Dan’s eldest daughter Ella, five.  It’s thought both Ella and MIa, 23 months, have moved out with Jacqueline while Dan has been spending time with his son Teddy, six.

Dan broke his Instagram silence and shared a photo of his son captioned ‘my handsome boy’ on Sunday night. The ex TOWIE star shares custody of Teddy with his ex Megan Tomlin. 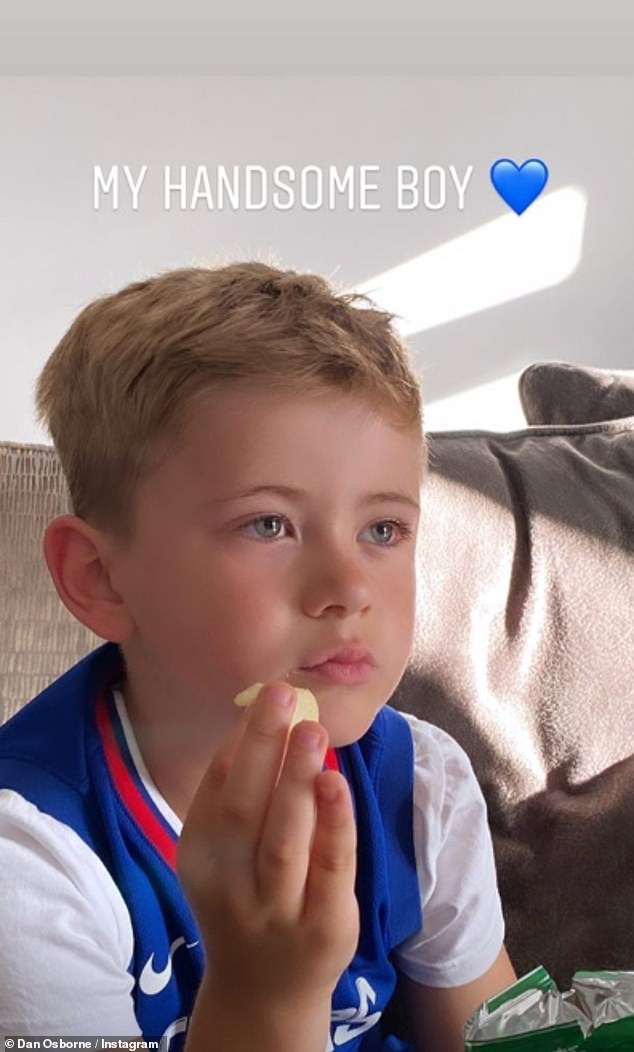 My boy: Dan shared a photo of his son captioned ‘my handsome boy’ on Sunday night. The ex TOWIE star shares custody of his son with his ex Megan Tomlin

In support of her child, doting parent Selina encouraged the soap star to be ‘brave and strong’ as she uploaded a quote on her Instagram account on Thursday.

The quote read: ‘Let’s teach our daughters it’s not about being beautiful. Teach them to be bold.

‘Be silly. Be strong. Be confident. Be independent and intelligent. Be brave and be fierce. Be real in a world full of fakes. Let’s redefine beauty.’ 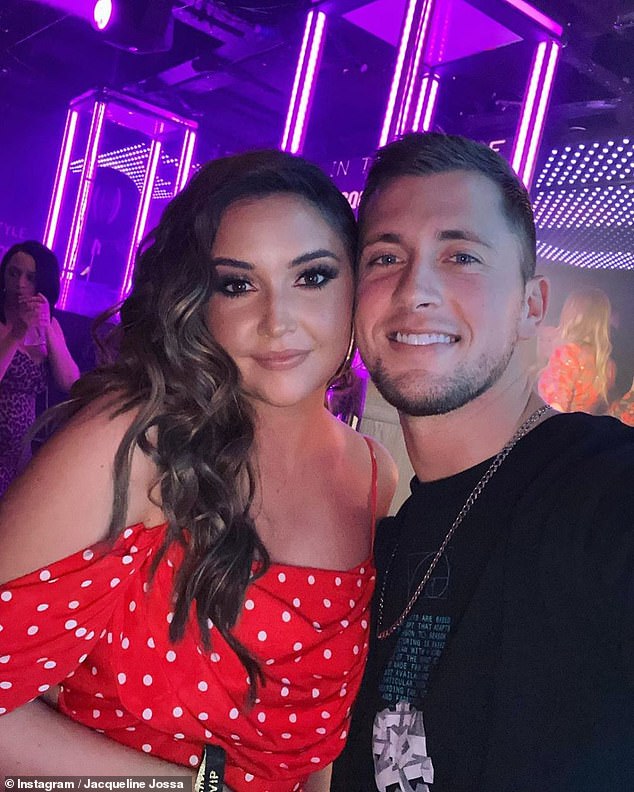 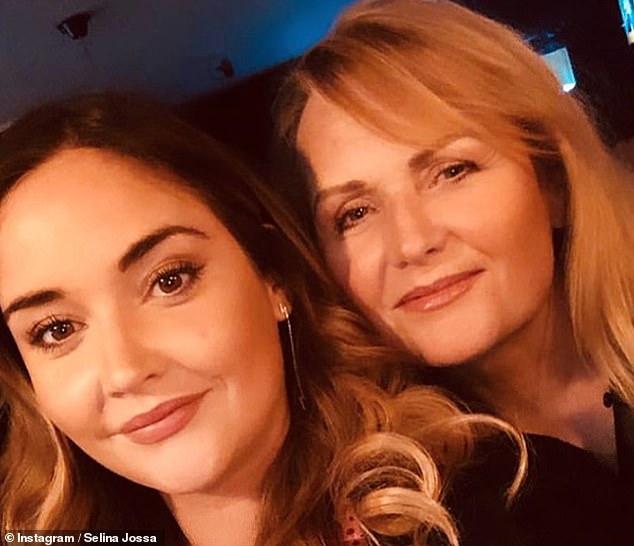 Cryptic: Doting parent Selina encouraged the soap star to be ‘brave and strong’ as she uploaded a quote on Instagram on Thursday 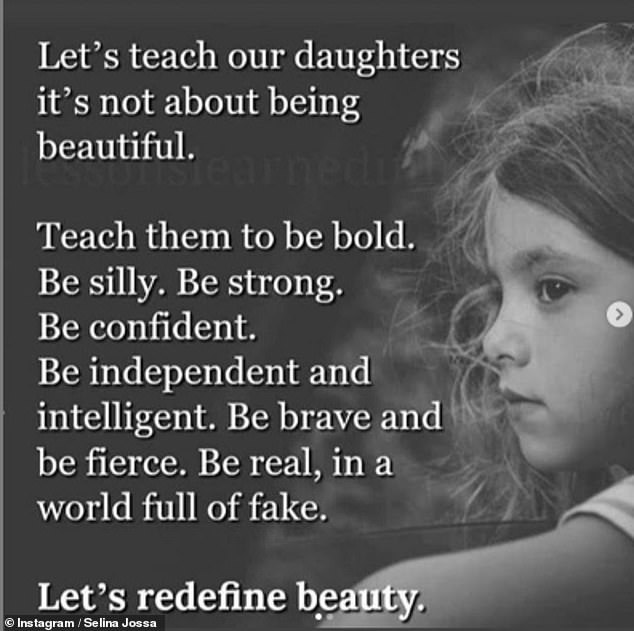 ‘Teach them to be bold’: Tagging her daughters Jacqueline and Katrina, the actress’ mum captioned her post: ‘The Girlies @jacjossa @katrinajossafarrelly’

The couple’s relationship has been plagued with cheating allegations and tensions between the pair have reportedly been taking their toll.

Jacqueline took to Instagram earlier on Sunday to clear up the rumours, stating: ‘I need some time. There is no split. No divorce. We are working together not against each other.’

She made the statement after a source told The Sun: ‘Jac and Dan have had their problems but lockdown magnifies everything. She needs breathing space.’

‘Jac and Dan have had their fair share of problems for the past couple of years but obviously lockdown magnifies everything.

‘There’s still a lot of love there but quite simply, Jacqueline needs some breathing space.’ 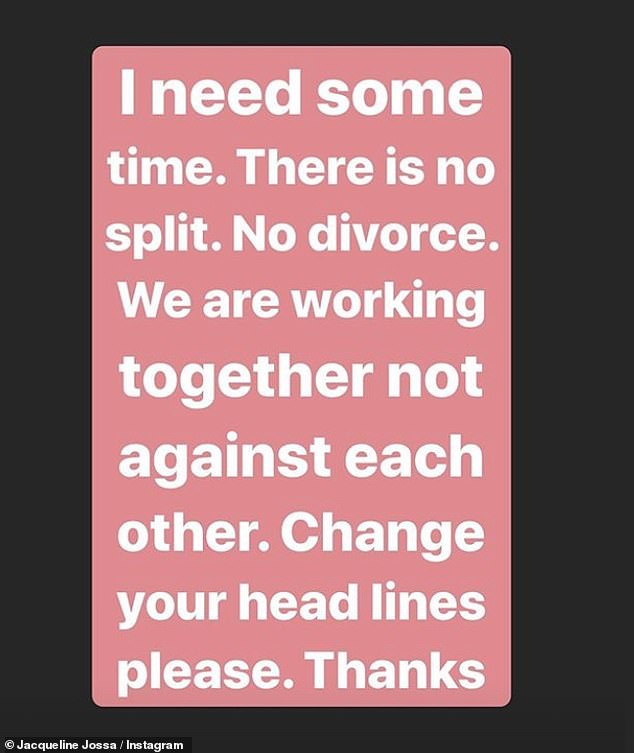 No divorce! Jacqueline took to her Instagram Stories on Sunday afternoon to hit back after the Sun claimed that their marriage had become ‘unworkable’ while in lockdown

The publication reported that Jacqueline has found it quite distressing dealing with speculation regarding the state of their marriage.

It has been suggested that Jacqueline and Dan will ‘reassess’ their relationship once the lockdown period is over and normality resumes.

They also believed it was unhealthy for the children to see them arguing while all holed up in their £1 million home together. 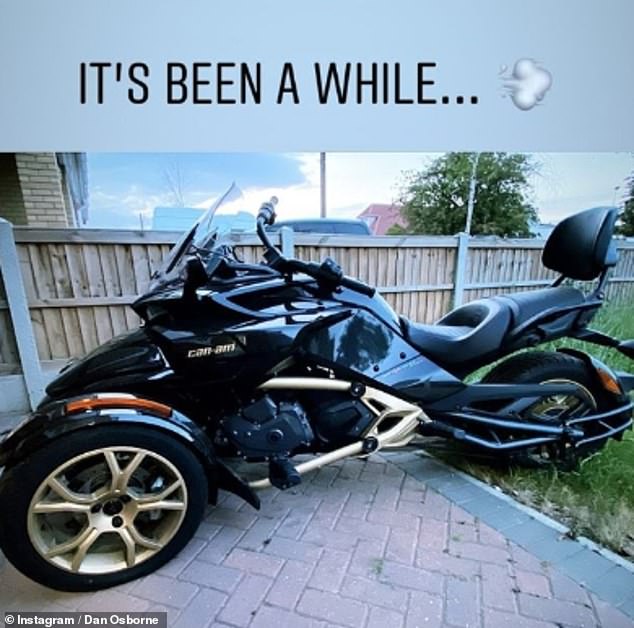 Time for a trip? As news of the reported split broke, Dan took to Instagram Stories to share a snap of his parked motorbike 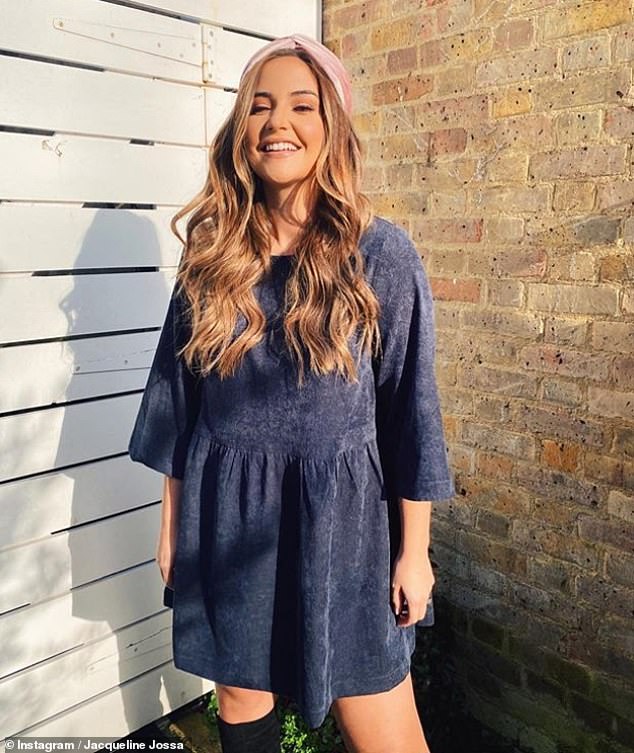 Absence: Earlier this week Jacqueline revealed she would be taking a break from social media, as she needed to ‘take some time’

Jacqueline and Dan married on 24 June 2017 at Cheshire Manor House with many of her EastEnders co-stars in attendance.

The couple met and started dating in 2013, and got engaged two years later four months of the birth of their first child.

As news of the reported split broke, Dan took to Instagram Stories to share a snap of his parked motorbike.

Earlier this week Jacqueline revealed she would be taking a break from social media, as she told her followers she needed to ‘take some time.’

2013: Jacqueline and Dan spark up a romance after meeting at an awards ceremony, while his ex Megan Tomlin is still pregnant with his son Teddy

June 2015: Dan proposes to Jacqueline on a romantic getaway to Greece

June 2017: Jacqueline and Dan tie the knot at Cheshire Manor House with many of her EastEnders co-stars in attendance

April 2018: Jacqueline and Dan briefly separate after he is accused of cheating with Love Island’s Gabby Allen, which they both deny

May 2018: The couple announce the birth of their second child Mia

March 2019: Dan is hit by claims he kissed Love Island’s Alexandra Cane in a nightclub, which both denied

December 2019: Dan apologised to Jacqueline for mistakes that ‘almost cost his marriage’ in a lengthy social media post after they reunited following her winning stint in the I’m A Celebrity jungle

January 2020: The couple’s romance seems to be back on track as they jet to Dubai for a romantic getaway

May 2020: Jacqueline announces a break from social media, days before reports she and Dan have split 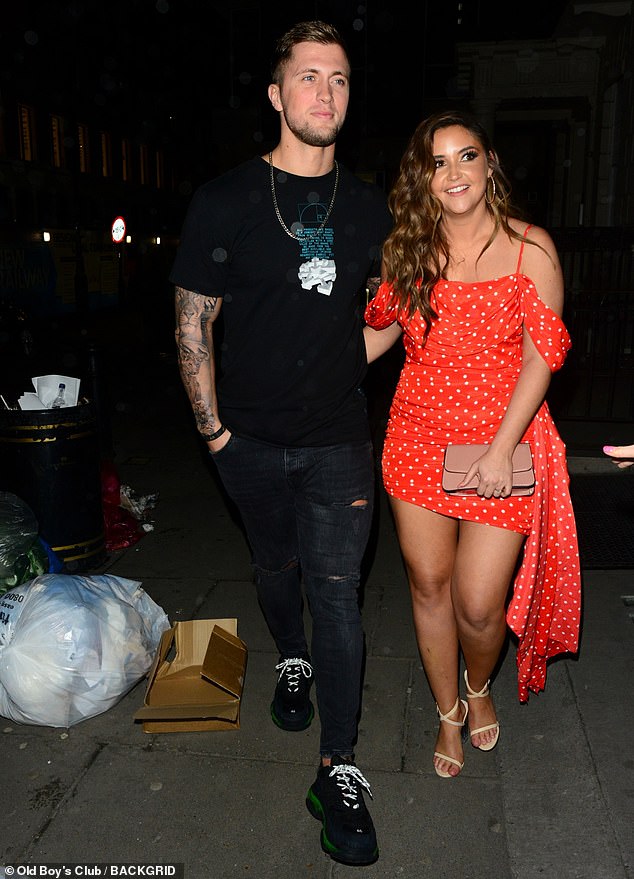 Together: Jacqueline and Dan married on 24 June 2017 at Cheshire Manor House (pictured February 2020)

In the post shared on Tuesday she wrote: ‘Good morning! Holding back on posting as much recently just taking some time✌️ hope you are all good! Speak soon! Xx.’

Just hours before news of the reported split broke, Jacqueline returned to Instagram with her take on a Beyoncé pose, dressed in pyjamas from her InTheStyle fashion range.

In early April the star also revealed she’d be taking a step back from her online presence to spend time with her family, as life came to a ‘natural pause’ during the COVID-19 pandemic. 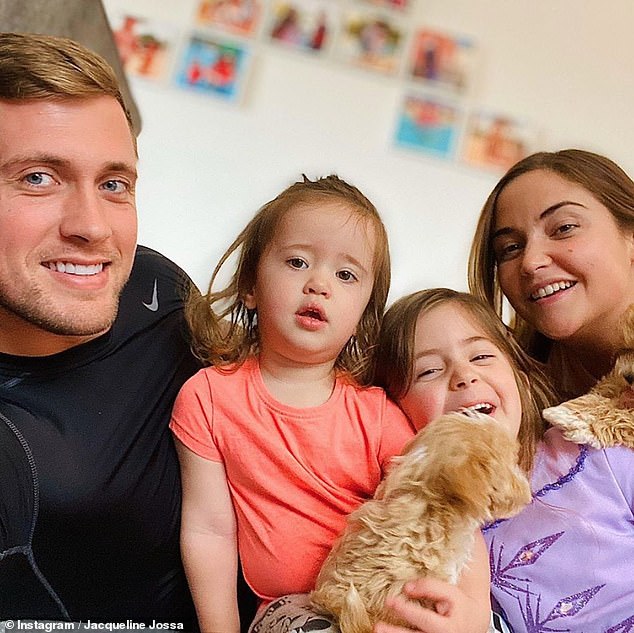 Sweet: The couple are parents to daughters Ella and Mia (pictured) while Dan also has son Teddy, six, from a previous relationship

Last month, Jacqueline also admitted to admiring her partner’s body as he trains in lockdown – and declared this time with her family was really needed for her.

Earlier this year the couple were thought to be giving their romance a fresh start after Dan apologised for doing things he wasn’t proud of in the relationship.

Dan lamented his past behaviour, which he did not specify, in a candid post reflecting on the last decade and seemingly referencing his recent cheating scandal. 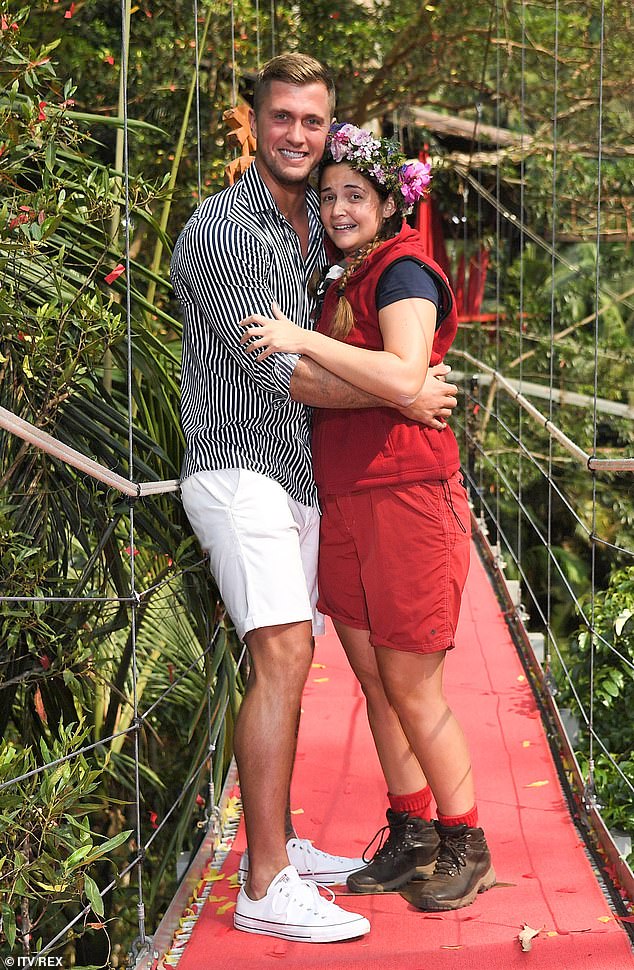 On the mend: During Jacqueline’s stint in the I’m A Celebrity jungle (pictured last year), Dan was hit by more cheating claims, and later apologised for things he wasn’t proud of

After endless denials, Dan finally admitted he had been unfaithful and then referenced his misgivings in a post showing him in 2010 and now while surrounded by his three children.

Dan continued: ‘Haha.. lots of ups and downs in the past 10 years.. been through some tough times but also had some amazing times!…

‘Done amazing things that I never thought I would do, also done things that I shouldn’t have done, but I’m living and I’m growing as a person and ending this decade with a beautiful wife and 3 incredible children!…

‘Feeling very lucky! looking forward to what the new year has to bring and wish you all the very best for 2020 & the future’.

A source allegedly told The Sun: ‘Dan called Natalie and started sending her nasty messages saying she had ruined his day by speaking about the romp.

‘Dan had told Jacqueline he’d done nothing wrong, so to see this totally blindsided everyone around her.’

The American bombshell claimed he has since begged her to remain silent about the fling after Chloe made the allegations while Jacqueline was in Australia for the latest series of I’m A Celebrity… Get Me Out Of Here!

She said: ‘I had sex with Dan in my hotel room. Chloe’s story was true. I was drunk and it was a huge mistake but it happened. As soon as Chloe’s story broke…

The Only Way Is Scandal: A look back at Dan Osborne’s personal woes

2015:  Dan’s relationship with Megan Tomlin comes to a nasty end when audio recordings threatening to ‘stick in a knife’ in her were published.

The fallout led Dan to be axed from The Only Way Is Essex, and his relationship with Megan came to an end after it was revealed his now-wife Jacqueline Jossa was pregnant with his child.

May 2018:  MailOnline exclusively revealed Jacqueline had contacted a mystery girl to quiz her over an alleged night of passion with then estranged husband Dan

May 2018: Dan is rumoured to be getting close to Gabby Allen when they attend a bootcamp in Spain. They have both denied they had an affair

May 2018: Jacqueline and Dan split after less than one year of marriage amid claims rows had been sparked by Dan working away from home

August 2018: Dan appears on Celebrity Big Brother where he is awkwardly reunited with Gabby

September 2018: Dan reaches the final of CBB and reunites with Jacqueline and his family. Jacqueline confirms they have reconciled

March 2019: In March, it was claimed Dan had been seen kissing Love Island star Alexandra Cane in a Manchester nightclub. This was denied by both parties

December 2019: Dan apologised to Jacqueline for mistakes that ‘almost cost his marriage’ in a lengthy social media post

According to Natalie, they made their way back to her hotel suite following an alcohol-fuelled dinner to celebrate the conclusion of Celebrity Big Brother.

In March 2019, it was claimed Dan had been seen kissing Love Island star Alexandra Cane in a Manchester nightclub. Both Dan and Alexandra denied this happened.

Dan was also accused of cheating with Love Island star Gabby Allen during a holiday in Marbella in April 2018, which both stars have strenuously denied.

In June 2018, Jacqueline was also hit by claims she quizzed a mystery woman over an alleged drunken one-night stand with then estranged husband Dan weeks after their wedding, according to The Sun.

The then-pregnant former EastEnders actress was said to have contacted the woman on social media as she ‘felt threatened’ and to quiz her over an alleged one-night stand the woman reportedly had with Dan.

The couple were thought to have briefly split during this time, but eventually reunited following the birth of their second child Mia.

In October of that year Jacqueline told OK! magazine: ‘Our wedding rings are firmly back on and we’re stronger than ever.’

Dan added: ‘It’s no secret that we went through a bad patch, but we’re back together and things are really good.’