How many times have certain Western politicians cast an envious glance at Jacques Chirac and thought: just how the hell did he get away with it?

France is in deep mourning following the news that its flamboyant, philandering former centre-Right president has died at the age of 86. World leaders joined in a chorus of tributes yesterday.

Precisely what and whom they are mourning, however, remains as opaque as ever. 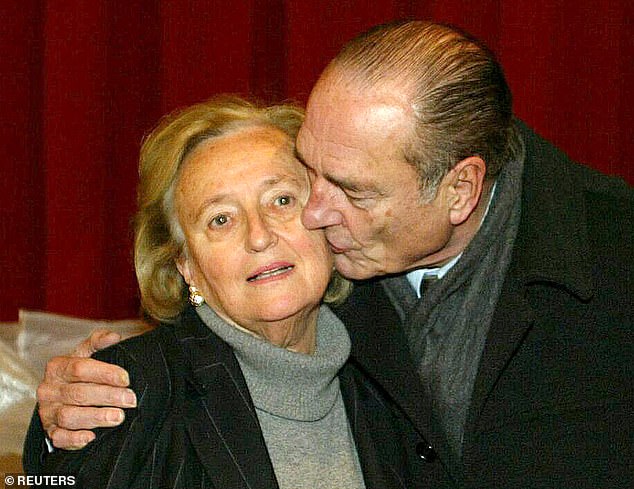 Chirac’s wife, Bernadette, pictured, was aware of his numerous affairs during their marriage

The first ex-president in French history to be convicted of corruption, he managed to espouse contradictory opinions on just about everything during four decades in politics.

Here was the great peacemonger – famous for keeping France out of the 2003 invasion of Iraq – who also flogged nuclear technology to Iraq’s Saddam Hussein and who obliterated a South Pacific coral atoll with his own nuclear weapons.

Here was Chirac the ardent Eurosceptic who ended up a passionate advocate of a European superstate.

He was the self-styled champion of human rights and the developing world who also sucked up to the most appalling tyrants, argued that ‘Africa is not ready for democracy’ and deplored the ‘noise and smell’ of workshy immigrants.

And all the while, he was the family man who enjoyed affairs with umpteen women – from humble secretaries and party workers to film stars. As mayor of Paris, he kept a mayoral bus with a bedroom for assignations and used public funds to rent a flat for a political journalist from Le Figaro who was his then mistress. 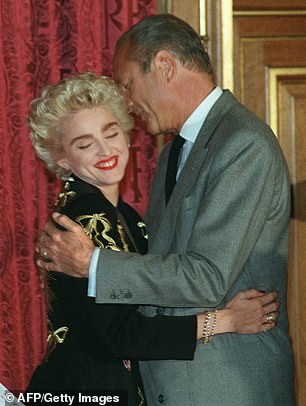 Chirac, pictured here in 1987 with Madonna, was routinely satirised on a top French comedy show as ‘Superliar’

As president, so it was claimed by one biographer, he would never want for ‘naked women, burning with desire’ on board the presidential jet. On a state visit to Tunisia, he managed to bring along both his long-suffering wife, Bernadette, and his mistress du moment on the same trip. The two women did not exchange a word.

Not that he would ever allow himself to be distracted from his work for long. Following the publication of the memoirs of the presidential chauffeur, Chirac could never quite shake off the nickname he acquired thereafter: ‘Five minutes – including shower’ (to add insult to injury, this was later reduced from ‘five’ to ‘three’).

Routinely satirised on a top French comedy show as ‘Superliar’, Chirac would never have got where he got – or lasted as long as he did – in British politics. It was his good fortune to be blessed with a French media which seldom subjected him to the same scrutiny endured by his British counterparts. It also helped that he was sleeping with quite a few of them.

And even when scandals did emerge – be it bungs or mysterious six-figure payments for family entertainment – the publicity never seemed to do him lasting damage. As far as millions of what he called ‘my dear compatriots’ were concerned, he was a quintessentially French political chancer who put the gloire back in to French public life.

He may have enraged the wider world. The British public, for example, were appalled by his withering attack on the UK: ‘You can’t trust people who cook as badly as that.’ Yet it all played brilliantly to a domestic audience. 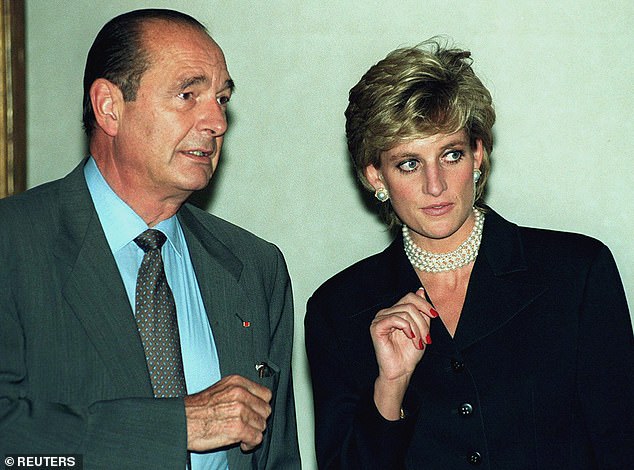 Chirac, pictured with the Princess of Wales in September 1995, criticised the UK with a withering remark: ‘You can’t trust people who cook as badly as that’

And on the few occasions when his extra-marital infidelities did emerge into the public domain, they did little harm to his ratings. ‘Do you know where my husband is tonight?’ the aristocratic Bernadette, asked his chauffeur on the night in 1997 when Diana, Princess of Wales was killed in a Paris car crash. According to the chauffeur, the president was enjoying a tryst with an Italian actress. When the story emerged some time later, the French public shrugged.

Chirac was the only surviving child of a well-to-do middle class family who shone at school and university and beyond, passing through the French Army – where he was top of his officer intake – and the prestigious Ecole Nationale d’Administration, the training school for elite civil servants.

His determination, along with his political and bureaucratic skills, were soon spotted by the French prime minister, Georges Pompidou who made him chief of staff and gave him the first of his many nicknames: ‘Le Bulldozer’. Having entered the French parliament in 1967, he was promoted to agriculture minister in the early Seventies. He wisely backed the new president, Giscard d’Estaing, and was rewarded with the post of prime minister.

He soon had a formidable power base from which to stake his claim for the top prize (while also dishing out fake jobs to chums). In 1977, he was elected mayor of Paris and remained there for nearly 20 years.

Chirac became president in 1995 and set about trying to apply a mild dose of Thatcherism to France’s bloated state sector. An inevitable succession of strikes and U-turns ensured that little changed. 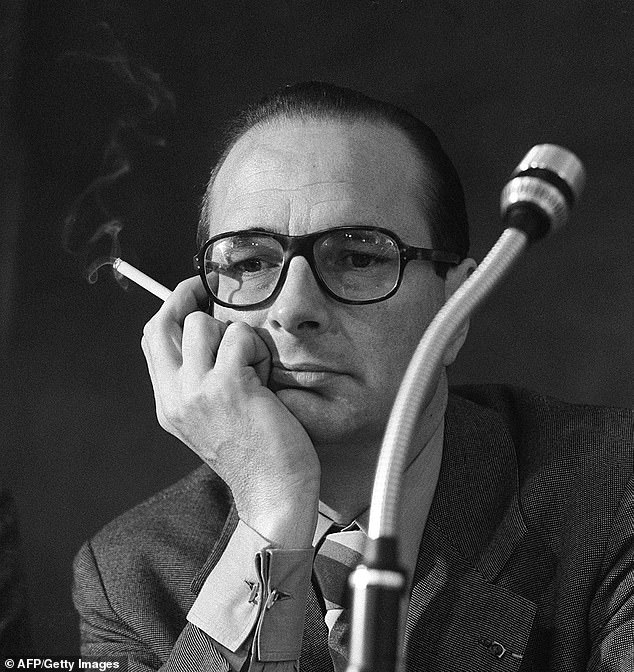 In 1977, he was elected mayor of Paris and remained there for nearly 20 years

At the same time, Chirac decided to conduct a series of nuclear tests on a far-flung Pacific atoll in the French colony of French Polynesia – just before France was due to sign a test ban treaty. There was outrage around the world, although a handful of France’s allies – including Britain – refused to condemn him.

Months later, the British government invited Chirac and his wife on a state visit to London where he was given the full Buckingham Palace treatment. She was said to be charmed by Chirac and the English-speaking Bernadette. However, within a year, Chirac was touring China, deploring Britain’s imperial record in Hong Kong to secure contracts for French businesses in China.

Having seen off a far-Right challenge by the National Front’s Jean-Marie Le Pen, Chirac won a second term as president in 2002.

Soon afterwards, his refusal to join the US and the UK in invading Iraq saw his approval ratings soar at home. However, his decision provoked such contempt among allies that he was derided by the tabloid press as a ‘cheese-eating surrender monkey’.

There was also another trip to stay with the Queen as Britain and France marked the centenary of the bilateral friendship agreement known as the ‘Entente Cordiale’.

Yet, at the same time, he was cosying up to a man whom Britain was trying to ostracise from the rest of the world.

Zimbabwe despot Robert Mugabe had been banned from visiting Europe. Yet Chirac gave him a special pass to attend a meeting of African nations in Paris. 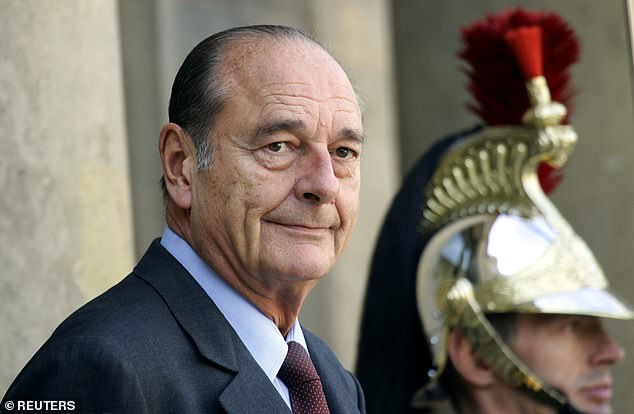 In 2011, he received a two-year prison sentence for abuse of trust and public funds, though the sentence was suspended

By now, reports of corruption during his days as Mayor of Paris were catching up. In 2011, he received a two-year prison sentence for abuse of trust and public funds, though the sentence was suspended. Thereafter, he disappeared from public view. Bernadette, meanwhile, would have the last word.

Four years ago, she let it be known that she was not a fan of her husband’s policies and that she supported his successor, Nicolas Sarkozy, whom Chirac loathed. She also accused her husband of ‘ruining her life’. His life in the public eye had certainly taken its toll on their two daughters, one of whom died in 2016 after a lifelong battle with anorexia.

In 2002, Bernadette had publicly acknowledged that she had been married to a serial womaniser. It had been difficult, she said but her husband had ‘always returned’ to her. ‘Anyway,’ she added, ‘I have often warned him: Napoleon lost everything on the day he abandoned Josephine.’ 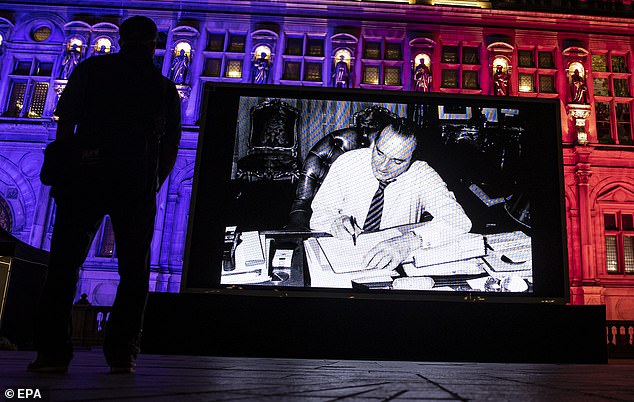 Having seen off a far-Right challenge by the National Front’s Jean-Marie Le Pen, Chirac won a second term as president in 2002