Steven Russel (pictured)l, 42, was distracted by his mobile phone when he ploughed into Robert Morris, 57, who was crossing a road in Coventry at 11.20pm on December 17, 2016

A Jaguar driver who had previously been sacked from his job for using a mobile phone at the wheel has been jailed for killing a man – moments after sending a text.

Steven Russell, 42, was distracted by his mobile phone when he ploughed into Robert Morris, 57, who was crossing Antsy road, Coventry at around 11.20pm on December 17, 2016.

The Jaguar hit Mr Morris in the nearside lane, throwing him into the air, and he landed in the road behind the car, after which Russell stopped and called 999.

Mr Morris was rushed by ambulance to University Hospital, suffering from ‘multiple and severe injuries’ from which he died three days later on December 20.

Morris had been on a night out with his three brothers celebrating the holidays.

At an earlier hearing, a jury took seven hours to find the former HGV driver guilty of causing death by dangerous driving.

He also pleaded guilty to harassing his daughter’s partner by threatening him with phone calls, texts and turning up at his home.

Russell, of Adelaide Street, Coventry, appeared at Warwick Crown Court on May 25 where he was jailed for seven years.

The 42-year-old was also was banned from driving for eight years. 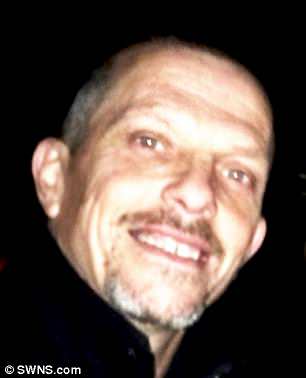 Mr Morris was rushed by ambulance to University Hospital, suffering from ‘multiple and severe injuries’ from which he died three days later on December 20

He said: ‘This offence began when you left home that night and you were in constant text contact with two women.

‘You were distracted throughout this whole journey, you were texting backwards and forwards throughout.

‘I utterly reject your evidence that the texts were only received or sent at traffic lights.

‘You were driving along using your telephone as if you were sitting at home.

‘You are a man with a proven propensity to drive while distracted.

‘You were only dismissed a few days before this offence.

‘It should have been at the very forefront of your mind that mobile phones and transport do not mix.

‘You were concentrating on your phone more than on your driving.

‘You could and should have been able to take every step to avoid him.

‘Had you been paying attention even mild braking could have avoided that collision.’

Prosecutor Cathlyn Orchard said: ‘He had done nothing to avoid the collision, he hadn’t braked, he hadn’t swerved, he simply drove straight into Robert Morris.

‘He was on his way to meet another brother at Walsgrave Social Club when he was hit by a car as he crossed the road.

‘The defendant could and should have taken action to avoid Mr Morris.

‘The only explanation is that he was not paying attention, that he had been distracted in some way.’

Defending Russell, Delroy Henry said: ‘He has expressed to me that no sentence will compensate for the heartache and pain that will be felt by Mr Morris’s family.

‘He tells me he’s truly sorry for the pain he has caused, and says to me he wishes it was him who had died that night.

‘He does not ask for forgiveness, because he can’t forgive himself.’