A ‘distracted’ Jaguar motorist who was constantly texting for 20 minutes before ploughing into and killing a father has been jailed for seven years.

Steven Russell, 42, struck Robert Morris, 57, who was crossing a road in Coventry following a Christmas drink with his family.

Russell, of Adelaide Street, Hillfields, who had been previously sacked from his job as a lorry driver for using a mobile phone at the wheel, did not even brake before hitting the father.

He has been jailed for seven years after being convicted of causing death by dangerous driving, and banned from driving for eight years.

Russell will serve a further 18 months on top of that sentence after admitting to harassment and criminal damage charges, which included him telling another man he was going to ‘put a bullet in your head’.

Jailing Russell at Warwick Crown Court yesterday, Judge Andrew Lockhart said that he was distracted as he was ‘concentrating more’ on his mobile phone than his driving.

He said: ‘This offence began when you left home that night and you were in constant text contact with two women.

‘You were distracted throughout this whole journey, you were texting backwards and forwards throughout.’

Mr Morris’s heartbroken wife, Sammi, was in court, along with other family members, and chose to read out her own victim impact statement.

She said: ‘Saturday December 17, 2016, was the last time the girls had their dad and he put them to bed.

‘It was our last kiss and the last time I would see the girls laughing and dancing in the kitchen.’

Mrs Morris said that when she was told her husband had died she had ‘never known pain like it’ and added: ‘That night not only did I lose my husband, but also my best friend and soulmate.

‘My children lost their daddy and their hero. Having had Robbie by my side since I was 18, I never imagined I would be alone, never mind a widow at 40.’

Her husband had been at the Red Lion pub in Walsgrave on the evening of Saturday, December 17, 2016, enjoying a Christmas drink with three of his brothers.

While he was on his way to meet another brother at Walsgrave Social Club, he was mowed down by Russell as he crossed Ansty Road at about 11.20pm.

They jury that found Russell guilty following a trial at Warwick Crown Court heard he had been exchanging text messages during the minutes before the collision. 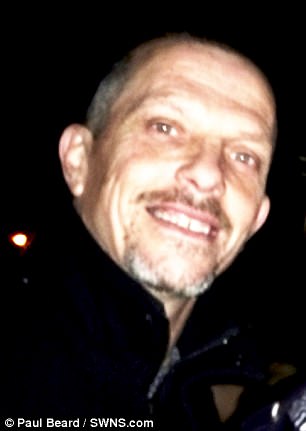 Mr Morris was rushed to hospital with catastrophic injuries following the crash on December 17, 2016, but died three days later

A statement from one of Mr Morris’s daughters, Rachel Jones, was read out by prosecutor Thomas Schofield.

In it, she said that seeing her dad in a hospital bed is ‘something we can never forget’.

Mrs Jones also said in her statement: ‘As a nurse myself I felt helpless.

‘We couldn’t believe it was actually happening. This is what happened on TV shows and not in real life and not to us.

‘On the third day in ITU he deteriorated further and died very suddenly with no warning.

‘We were devastated, heartbroken and shocked.’

She added: ‘There are no words to describe how much I miss him.

‘I’m not angry, I’m just impossibly sad. He was too young to leave us.’

During his trial, prosecutor Cathlyn Orchard had said that Russell ‘had done nothing to avoid the collision, he hadn’t braked, he hadn’t swerved, he simply drove straight into Robert Morris.’

Miss Orchard told the court that months before the fatal crash, Russell had been sacked as an HGV driver for filming a crash on his mobile phone.

During cross examination, she asked him: ‘Are you forgetting the other time when you were using a phone at the wheel? Were you driving while filming?

‘You were using a phone to record an accident which you then loaded onto social media. You did this all the time while driving a lorry.’

Delroy Henry, mitigating for Russell, said: ‘No sentence will compensate for the heartache and pain he has caused Mr Morris’s family.

‘He expresses through me he is truly sorry for the pain he has caused. He will never be the same again.

‘It has destroyed him and knowing he is responsible for taking someone’s life is something he can barely live with.

‘While he doesn’t expect any forgiveness in any shape of form, he wishes to express an apology and that he is truly sorry.’

Russell’s barrister added that while there had been ‘utilisation’ of his mobile phone during the journey, there was ‘no evidence that he was compiling any text message’ at the time of the collision. 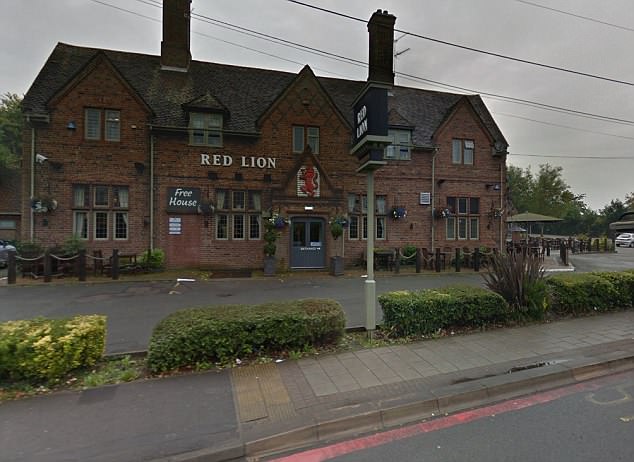 Mr Morris was mowed down as he crossed Ansty Road at 11.20pm after leaving the Red Lion pub (pictured) where he had been enjoying a drink with his three brothers

However, Judge Andrew Lockhart says his ‘assessment of the evidence and the jury’s verdict is that the text message arrived and he was reading it’ when Russell’s car hit Mr Morris.

The court also heard that Russell had pleaded guilty to charges of harassment and criminal damage in connection with a separate incident.

Mr Schofield said the offences were against a man who is in a relationship with Russell’s daughter and in March last year the victim received a text message from Russell saying he was driving around looking for him.

Mr Schofield said the victim eventually rang Russell back to ask why he was being ‘bombarded’ and Russell told him: ‘Cos I’m going to smash your face in and put a bullet in your head’.

The court heard that Russell was then outside the victim’s house making more threats, which included saying that ‘within the next five weeks he was going to be shot’.

Russell then caused damage to a door by kicking it before police arrived and he was arrested.

He told Russell: ‘From 10.45pm you were in constant text conversation. You were distracted through the journey, with texts forwards and backwards throughout.

‘It was a journey of some 20 minutes and you were concentrating more on your phone than your driving. I utterly reject your evidence that the texts were only received or sent at traffic lights.

‘You were driving along using your telephone as if you were sitting at home. You are a man with a proven propensity to drive while distracted.

‘It should have been at the very forefront of your mind that mobile phones and transport do not mix. You were concentrating on your phone more than on your driving.

‘You could and should have been able to take every step to avoid him. Had you been paying attention even mild braking could have avoided that collision.’

The judge stated that Mr Morris was ‘there to be seen’ in Ansty Road for ‘around 100 metres’ on the night that he was hit by Russell’s car.

‘Had you been paying proper attention you would have seen him and been able to react,’ he told Russell.