Jordan Towers, pictured, targeted teenagers across the country by grooming them on Instagram and other sites using fake profiles

This mugshot shows the moment a paedophile wept after being caught by police after luring dozens of girls as young as 13 for sex.

Jordan Towers targeted teenagers across the country by grooming them on Instagram and other sites using fake profiles.

He was jailed for six years by a judge at Guildford Crown Court.

Towers was arrested in February after a 13-year-old girl from Kent reported he had befriended her online using a fake profile and persuaded her to take indecent photographs of herself. When officers searched his mobile phone, they found more than 1,000 vile child pictures.

It quickly became apparent that Towers was befriending vulnerable teenage girls via Instagram or a teenage dating app called Yellow.

Guildford Crown Court heard how he paid the victims compliments to gain their trust before asking them to send photos or take part in video chat which quickly became sexual in nature.

He became more persistent and once a victim refused to send any more, became aggressive and threatened to distribute the indecent images they had already sent to their friends and family unless they sent more.

Towers also used some of the images he was sent to set up profiles and pose as a teenage girl, sending these images to other victims to encourage them to send similar images back to him.

Some of the victims also reported that they had been contacted by more than one of his user profiles.

Towers, of Portugal Road, Woking, in Surrey, was sentenced to six years’ imprisonment plus a further four years on licence and forced to sign the Sex Offenders’ Register for life. 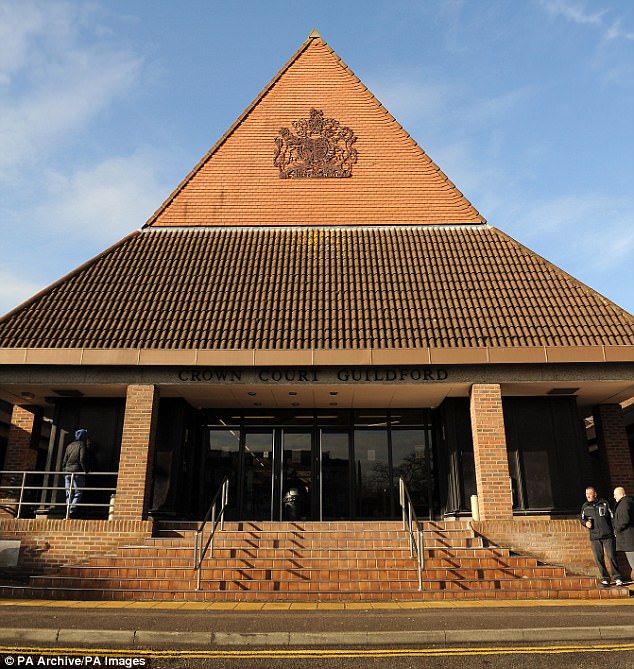 Towers was jailed for six years by a judge at Guildford Crown Court, pictured (stock photo)

He was also given an indefinite Sexual Harm Prevention Order and ordered to pay a victim surcharge of £170.

The investigation, which was led by Surrey Police, involved interviewing 29 girls across the country, with officers travelling to South Wales, Bristol, Doncaster, Greater Manchester, Essex, Kent and Sussex.

Detective Inspector Martin Goodwin from Surrey Police’s Paedophile Online Investigation Team, who led the investigation, said: ‘The prison sentence handed to Towers today shows that the internet is not a safe or anonymous place for abusing teenage girls.

He continued: ‘Towers manipulated vulnerable teenage girls, persuading them to send indecent photos of themselves by befriending them, gaining their trust and then threatening to blackmail them when they refused.

‘He has also used fake profiles to con his victims into believing they were talking to girls their own age. The lengths that Towers went to, to deceive and target his victims is deplorable.

‘His offending has had a profoundly devastating impact on not only his victims’ lives, but also those of their families.

‘Many of the girls we interviewed had thousands of followers on their social media accounts but did not know who many of them were, and were sending indecent photos of themselves.’