Since sharing the news that he’s expecting his first child with girlfriend Sophie Church, he’s been regularly updating fans with progress of her pregnancy.

And Jake Quickenden kept the posts coming on Friday, when he took to Instagram to share an adorable snap of himself cradling Sophie’s growing baby bump.

Posing shirtless, the former X Factor star, 32, was seen kneeling on the kitchen floor before his partner as he looked adoringly 27-year-old Sophie’s bump.

Baby bump: Jake Quickenden kept the posts coming on Friday, when he took to Instagram to share an adorable snap of himself cradling girlfriend Sophie Church’s growing baby bump 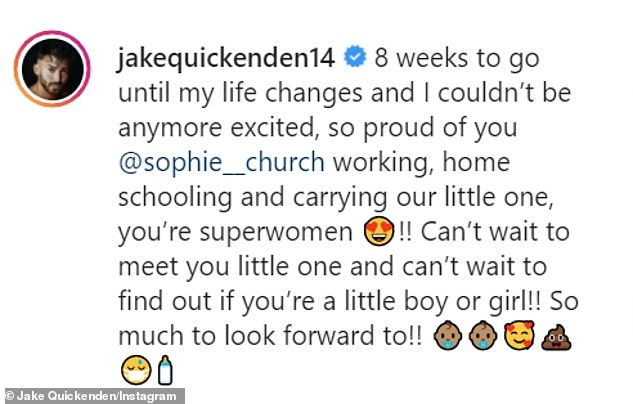 Captioning the heartwarming image, the TV personality revealed that they’re just two months away from welcoming their bundle of joy.

He wrote: ‘8 weeks to go until my life changes and I couldn’t be anymore excited, so proud of you @sophie__church working, home schooling and carrying our little one, you’re superwomen!!

‘Can’t wait to meet you little one and can’t wait to find out if you’re a little boy or girl!! So much to look forward to!!’ [sic]

Jake has previously shared snaps of himself doting on Sophie during her pregnancy, sharing a snap of himself kissing her baby bump back in February. 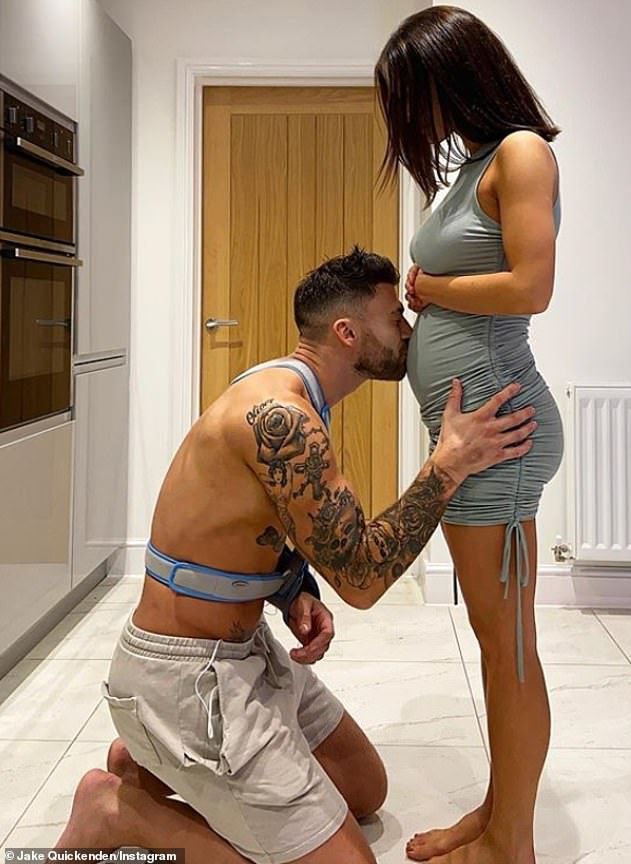 Excited! The former X Factor star shared the heartwarming image to Instagram as he gushed about becoming a father

Jake captioned the photograph: ‘Straight out of surgery and then was away for two nights filming the real full monty.

‘[S]o glad to be home, missed these two so much. As you can see @sophie_church is really showing now!!! Honestly cannot wait to be a dad and I can’t stop smiling!!’

Meanwhile, Jake’s pregnant girlfriend took to her own Instagram where she shared sweet black-and-white snaps of her baby bump.

The couple, who have been dating since June 2018, announced they were expecting a baby in September, following a ‘tough’ miscarriage in 2019. 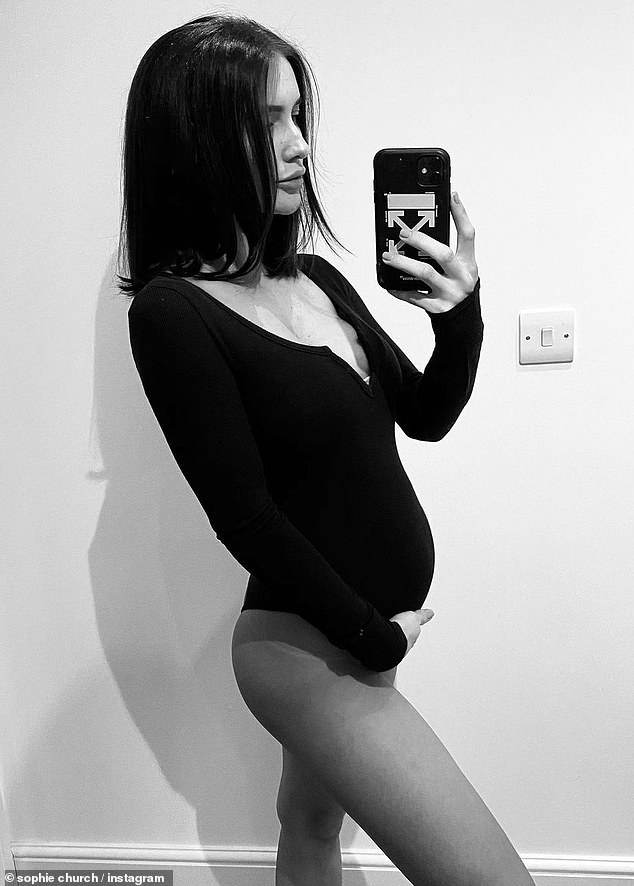 Bump alert! Meanwhile, Jake’s pregnant girlfriend took to her own Instagram where she shared sweet black-and-white snaps of her baby bump

The baby will be Jake’s first child, while Sophie is already a mum to Freddie, six, from a previous relationship.

The baby bump shots come after it was reported that Jake will be unable to do any exercise for six months after rupturing his pectoral muscle on SAS: Who Dares Wins.

The TV personality was said to have been rushed to London from Scotland during filming for a gruelling four-hour operation in November.

A source told The Sun at the time: ‘Jake ended up being in surgery for five hours on Monday as the injury he sustained on SAS was worse than thought.’

They added: ‘Jake won’t be doing any physical sport or exercise for up to six months and will have to wear a sling for at least two months.

‘It’s a devastating blow for him. In his heart he knew he wouldn’t be able to return to SAS but having been told by the doctors the extent of the injury it’s really hit home.’

The source claimed that Jake’s pectoral muscle had ‘ruptured’ and it had to be ‘glued back’ to his bone.

MailOnline contacted representatives for both Jake Quickenden and SAS: Who Dares Wins for comment at the time. 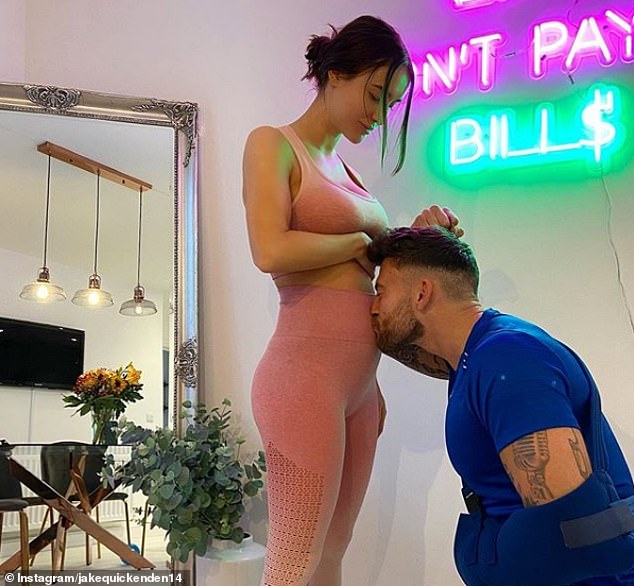 Due date: The lovebirds are set to welcome their bundle of joy into the world on March 6th