Prince Harry has reignited the row over Britain’s colonial history as it emerged today he wanted the organisation to ‘acknowledge the past’, even if it’s ‘uncomfortable’.

It is likely to cause a ruckus in the Royal household, with his grandmother the Queen being head of the 54-nation group, and his father Prince Charles to succeed her when she dies.

His claims have touched on a delicate subject which Britons have mixed views, with some supporting the Commonwealth and noting its differences from the British Empire, while others detest them both.

The Queen is the head of the 54-nation Commonwealth. She is pictured here with Jamaica’s Governor General Patrick Allen and his wife Patricia during a reception for Commonwealth Governors General at Buckingham Palace in 2012

The Commonwealth consists of 54 independent countries, the vast majority of which were at one point controlled by Britain.

The UK is one of the member states in the Commonwealth of Nations, as are Australia, Canada, New Zealand and South Africa.

Other member states include India, Pakistan, Singapore, Barbados, Namibia and Papua New Guinea and others from across Europe, North America, the Caribbean, Africa, Asia and Oceania.

Association in the Commonwealth of Nations, which is based at Marlborough House on Pall Mall in central London, is voluntary.

The Queen heads the organisation, with her son and Harry’s father Prince Charles set to take over when she dies.

It is designed to promote peace, human rights, democracy and other core values among its member nations. 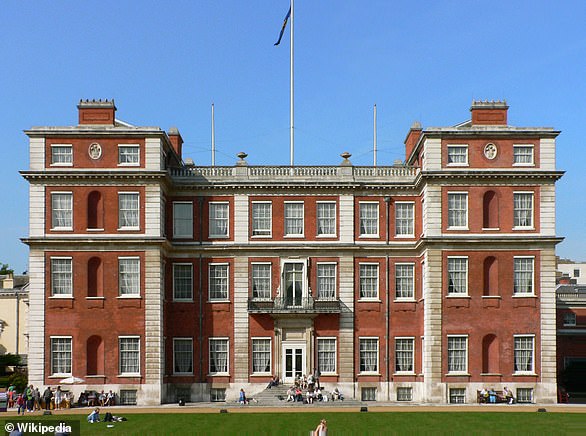 Association in the Commonwealth of Nations, which is based at Marlborough House on Pall Mall (pictured) in central London , is voluntary

The Commonwealth is still seen by many as relevant, with its 2.4billion-strong membership making up a third of the world’s population.

It is often a platform for smaller nation members to be heard on the world stage, when otherwise they would be ignored.

Commonwealth leaders drop by Marlborough House when they are in London and have the chance to raise concerns to the British, who sit on the United Nations Security Council and have a louder voice than places such as the small Pacific island of Nauru.

On a more direct level, the Commonwealth connects people, with one example being deploying doctors or vets or lawyers from one member state to another which has a shortage.

It also helps out financially, which with the current pandemic still raging across the world is a saviour for many of the poorer nations.

Some less economically developed countries in Africa and Asia see the organisation as a lifeline to help boost sectors such as business – with at least £1.039billion being spent since 2015.

The importance of the association was made abundantly clear at a meeting in April 2018, where principles were drawn up to protect journalists working in hostile countries to the trade.

Some reporters had been facing death threats in rural parts of India, while others were physically attacked in Rwanda – both member nations – but the meeting agreed to make sure ‘journalists can work without fear of attack, intimidation or interference, and to take prompt measures to protect them when they face a serious threat of harm or are subject to attack’.

The power of the Commonwealth, sometimes referred to as a ‘family of nations’ was also on show more recently during Theresa May’s premiership, with the organisation playing a part in exposing the Windrush Scandal.

World leaders from the organisation were gathered in London in 2018 when the story broke, heaping pressure on the government to U-turn in policy and issue an apology. 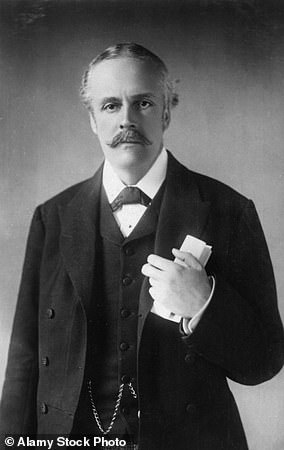 The Balfour Declaration, named after Lord President of the Council and former Prime Minister Arthur Balfour, enshrined equality and autonomy to the Dominions of the British Empire

The Commonwealth has only been a recognised organisation since 1931, but its origins can be traced back further to the Balfour Declaration in 1926.

The document, named after Lord President of the Council and former Prime Minister Arthur Balfour, enshrined equality and autonomy to the Dominions of the British Empire.

The 1931 Statue of Westminster codified the independence of the Empire’s Dominions and officially established the Commonwealth.

After a wave of decolonisation swept across the world after the Second World War, the Commonwealth of Nations was officially declared by the London Declaration on April 28, 1949.

Over the years, a number of countries have either voluntarily left or joined the Commonwealth, while others have recognised their own Heads of State in lieu of the British Monarchy.

Some feel strongly today that the Commonwealth is just a second British Empire masking as something else, despite efforts by the organisation to move away from its colonial past.

One writer pointed to the control Britain still has over vast areas of the world thanks to the organisation.

Afua Hirsch said in the Guardian that UK companies rule of over $1trillion resources in Africa – including gold, diamonds and oil – shows the continent is still under the power of the Empire.

Some people continue this link between the Commonwealth and Empire, pointing to atrocities the British oversaw in its territories.

Colonialism had many benefits for smaller overseas territories, such as economic development and greater transport systems – including the building of India’s railway network, which helped transform the country.

So-called ‘Whig’ historians, such as 19th century historian Thomas Babington Macaulay, argued the British Empire led to greater liberty, the spread of democracy and scientific progress in its colonies.

Maccaulay played a major role in the introduction of English and western concepts to the education system in India – including replacing Persian with the English language.

But there were a number of atrocities involving the British Empire – including the concentration camps in the Second Boer War, the Amritsar massacre in 1919, the aftermath of the partition of India, the Mau Mau Uprising and famines in India – that people criticise Britain for and question its right to have any power over these countries today. 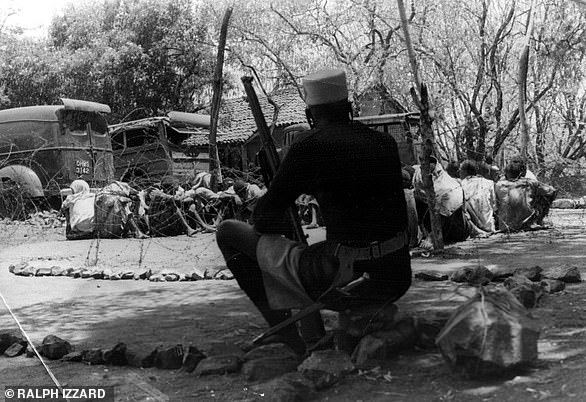 In the Boer War, between 1899 and 1902, Britain fought with two Boer republics in South Africa.

Though the cause of the dispute is debated by historians, some suggest it was an attempt by Britain to take control of the world’s largest cold mining complex.

The vastly superior British army, of around nearly 500,000 soldiers, fought the much smaller 88,000 strong force of Boers – who used the hostile terrain of their land to their advantage.

Frustrated by the guerrilla warfare tactics, Britain turned to a scorched-earth policy, destroying Boer farms and rounding-up inhabitants into concentration camps – many years before their infamous use by the Nazis.

Thousands of women and children captives died due to to poor conditions – causing protests in Britain and damaging the country’s reputation worldwide. 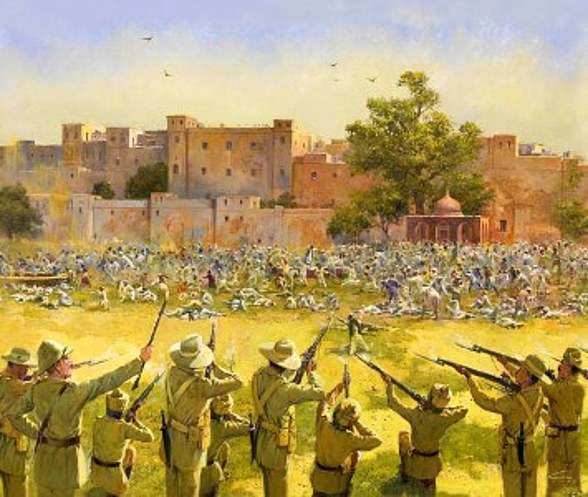 The killings took place when soldiers fired on a group of unarmed Punjabi civilians in Jallianwala Bagh public garden as they protested the British government’s forced conscription of Indians to join the armed forces and also the war tax which threatened to cripple the Indian economy.

The Amritsar massacre remains a flashpoint between the UK and the Commonwealth country to this day. Last year, then-Prime Minister Theresa May expressed the UK’s ‘deep regret’ over the massacre.

Another contentious issue, which has more prominence today due to the Black Lives Matter movement, is the calls for Britain to pay reparations to people descending from slaves.

There were 14 countries in the Caribbean alone aiming for this, but Hirsch claimed the UK government was using using jurisdiction problems to manoeuvre around any payments.

This argument came to a head when former Prime Minister David Cameron ruled out slavery reparations during a trip to Jamaica.

He admitted ‘these wounds run very deep’, but said Britain’s role in ending the slave trade should be remembered and called for people to ‘move on’.

The Old Etonian was asked to personally atone for his family’s slave owning past and for the country to pay back billions, which he refused.

But perhaps the most famous scandal involving the Commonwealth was the treatment of the Windrush generation, whose parents had been invited here in the 1960s but the country tried to deport them over the last decade.

The Windrush generation was named after the ship that brought over one of the first groups of West Indian migrants invited to the UK in 1948 to help rebuild post-war Britain. 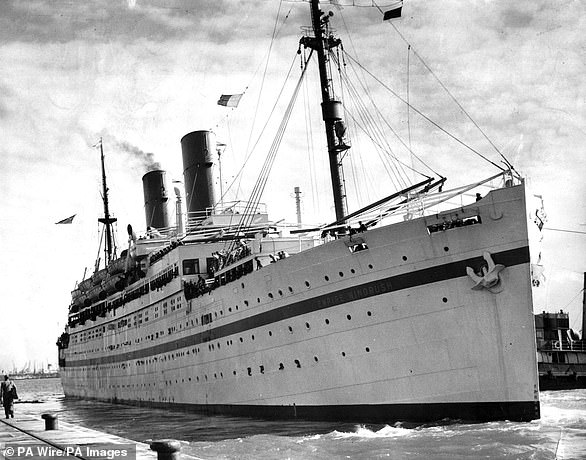 Over the next 25 years thousands followed, taking jobs to fill shortages, particularly in the nascent NHS.

When the scandal blew up in 2018, the then Home Secretary Amber Rudd was forced to resign after misleading parliament about how many people had been affected.

The forgotten victims were the hundreds who had their lives turned upside down by the policy. They lost their jobs and their rights, were incarcerated and even deported.

The Winsrush Scandal was seen as a product of the British attitude to the Commonwealth, buried deep in racism.

Some trace the scandal back to the laws on immigration to the UK from the Commonwealth in the 1960s, while others point to the ‘working holidaymaker rules’ in the 1970s.

Regardless of how others see the Commonwealth, Prince Harry made a huge gamble by wading into the debate, with the rest of the Royal Family and their involvement in the organisation unlikely to leave them impressed with his comments.