Jamal Khashoggi ‘nervously accepted offer of a cup of tea inside the Saudi Arabian consulate by ‘kill squad’ moments before they drugged then murdered him and dismembered his body’, new report claims

According to audio recordings from inside the Saudi consulate, Jamal Khashoggi was offered tea moments before he was killed

Jamal Khashoggi was offered a cup of tea at Saudi Arabian consulate before being drugged and brutally murdered, according to a new account of the final months of life.

The 59-year-old journalist had decided to leave his native Saudi Arabia for the U.S in September 2017, but was lured to the embassy in Istanbul on in October this year to collect papers for his upcoming marriage.

Listening devices planted inside the building by Turkish intelligence captured the ‘kill squad’ planning the murder in the days before and carrying it out on October 2.

A new report by the Washington Post, to which Khashoggi was a contributing columnist, says that when he arrived at the consulate a member of the team asked ‘whether he would take tea’.

The paper reports that there was an ‘edge’ in Khashoggi’s voice when he accepted the drink that betrayed his sense of unease. 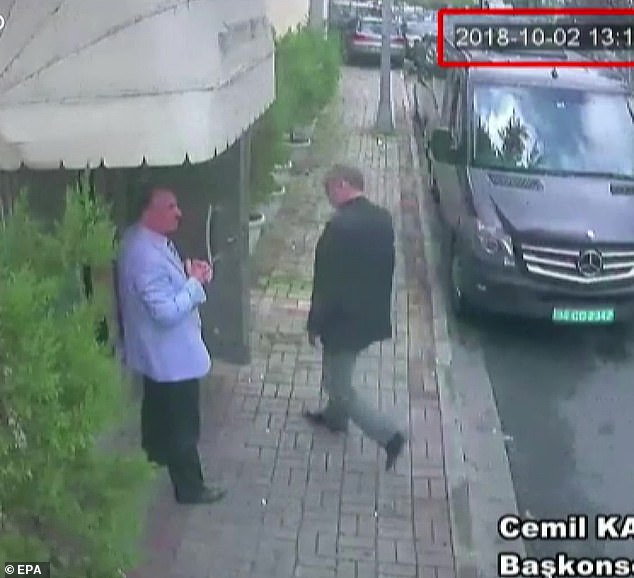 Police CCTV video showing Saudi journalist Jamal Khashoggi (right) entering the Saudi consulate in Istanbul, Turkey on October 2, where he was ‘offered a cup of tea’ before being brutally murdered and his body dismembered

Shortly afterwards, a member of the Saudi ‘kill squad’ chillingly told the journalist he would be ‘going back to Saudi Arabia’, before injecting him with a lethal dose of sedative.

Khashoggi’s final gasps for air are audible on the tape recordings, officials told the Washington Post.

They added that there was nothing to suggest that the team had any intent to take Khashoggi alive.

Further reports quoting those who have listened to the recordings claim Khashoggi’s last words were to tell his killers ‘I can’t breathe’.

Just moments after his gasps faded, the silence on the tape gives way to the sound of an electric saw, consistent with reports that Khashoggi’s body was dismembered.

His remains – thought to have been dissolved in acid – have never been found. 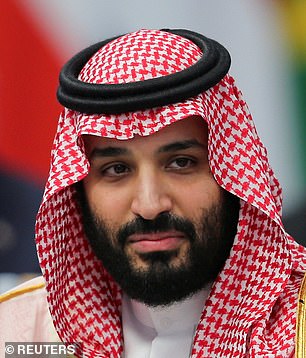 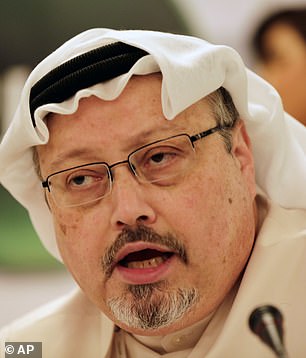 Last week Time magazine put Jamal Khashoggi on its cover, naming him along with three other journalists and a newspaper as its 2018 Person of the Year for standing up for the truth in the face of persecution and violence.

Turkish President Recep Tayyip Erdogan has repeatedly said he will not give up the case and has criticized Riyadh for repeatedly changing its story. Turkey has been seeking to extradite 18 suspects, including 15 members of an alleged assassination squad.

Earlier this month, the U.S Senate passed a resolution holding Mohammed bin Salman responsible for the killing and calling for the Saudi Arabian government to ‘ensure appropriate accountability’.

The passage came shortly after the Senate approved a different measure to end U.S. military support for the Saudi-led war in Yemen.

The double whammy of votes were seen as lawmakers’ expression of anger and frustration with Trump’s handling of U.S.-Saudi relations.

Trump has said he wants Washington to stand by the Saudi government and the prince, who he describes as a key ally, despite the CIA also reporting that it was probably him who ordered Khashoggi’s killing.

Saudi officials have rejected the accusations. The Saudi public prosecutor is seeking the death penalty for five suspects, as the kingdom tries to contain its biggest political crisis for a generation.