Jamal Khashoggi’s fiancee demands to know where his body is

The grieving fiancee of slain journalist Jamal Khashoggi is demanding to know where his body is so she can bury him a month after he was murdered.

Hatice Cengiz was waiting outside the Saudi Arabia consulate in Istanbul on October 2 when Khashoggi went inside to pick up paperwork needed for their upcoming marriage.

Cengiz, who never saw her fiancee again, told ABC News that she tried to believe he was still alive until the end.

Weeks after the Washington Post columnist entered the consulate, Saudi officials finally acknowledge his death and claimed that he had died during an ‘altercation’.

Under mounting international pressure, Saudi Arabia has changed its narrative about Khashoggi’s killing several times, and has recently acknowledging that Turkish evidence shows it was premeditated.

Cengiz is demanding to know who ordered the killing of her fiancee.

‘We still don’t know where Jamal’s body is,’ Cengiz said.

‘There is no explanation about this. He did not have a funeral yet. This is not acceptable in Islamic rules. This is our last duty to fulfill.’

Cengiz said she is still coming to terms with Khashoggi’s murder and that she only believed it when the Saudis publicly stated that he had died.

‘I didn’t want to believe,’ she said. ‘That was the first day I said to myself perhaps there could be a tragedy. I wanted to believe that he was alive until the end.

‘When Saudi officials accepted the responsibility, then I believed it happened.’

Cengiz said Khashoggi was apprehensive about going to the consulate because he feared he might be detained given his prior criticism of Saudi Arabia and Crown Prince Mohammed Bin Salman.

‘He did not want to go to the consulate. He thought it was a risk to go,’ she said.

‘He thought of the possibility of them capturing him. He didn’t want to face the consequences of his political views.’ 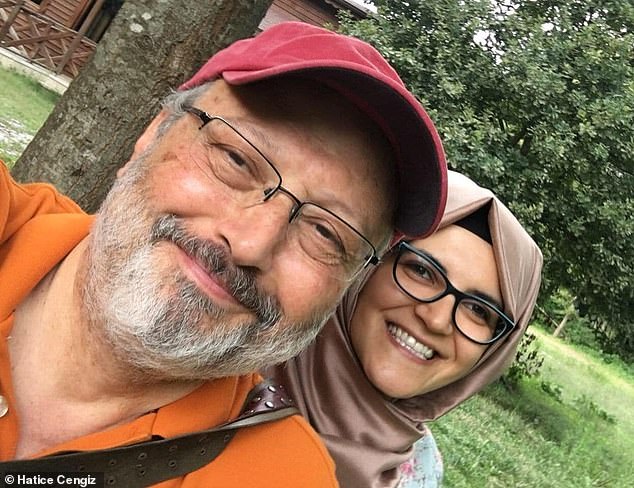 Cengiz, who never saw her fiancee again, said she tried to believe he was still alive right up until Saudi officials acknowledge that he had died in what they claimed was an ‘altercation’ 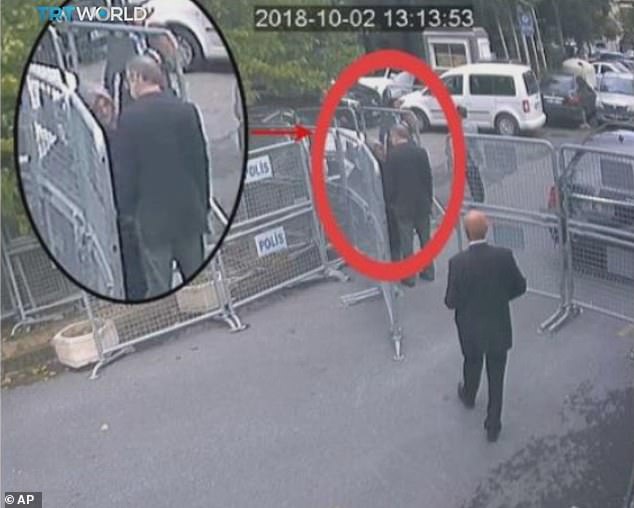 But Khashoggi said he was surprised by the pleasant way he was treated and was more relaxed when he had to go back in four days later to pickup paperwork.

‘Naturally, after the first positive visit we had no reasons to think that there would be any sort of danger,’ Cengiz said.

Meanwhile, Cengiz spoke at a memorial in London on Monday as she called on U.S. President Donald Trump and other leaders to ensure that his death in Istanbul is not covered up.

Cengiz expressed disappointment in the ‘leadership of many countries’. Singling out Trump, she urged him to ‘help reveal the truth and ensure justice be served.’

‘He should not pave the way for a cover-up of my fiance’s murder. Let’s not let money taint our conscience and compromise our values,’ she said.

Cengiz also said she wished she had entered the consulate instead of Khashoggi.

She said in reference to an alleged Saudi hit squad sent to kill Khashoggi: ‘If only I knew that would be the last time I would see my Jamal, his smile, hear his laughter, I would have stood in front of that murderous team myself.’ 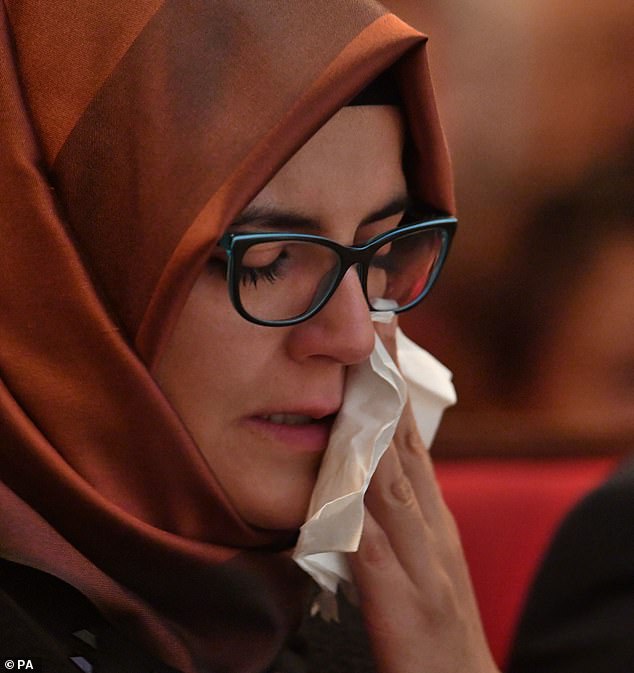 Cengiz spoke at a memorial in London on Monday (above) as she called on U.S. President Donald Trump and other leaders to ensure that his death in Istanbul is not covered up 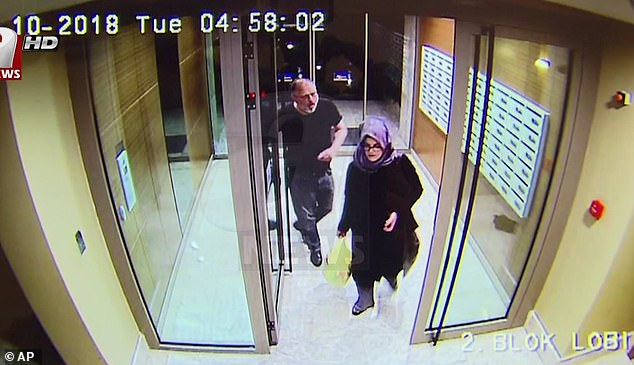 ‘This needs to be solved now; there is no point in excuses,’ Erdogan told journalists.

Erdogan said the prosecutor repeated to his Saudi counterpart Turkey’s extradition request for 18 suspects detained in Saudi Arabia for the Oct. 2 killing to be put on trial in Istanbul. Fidan asked al-Mojeb to reveal who sent this group, according to the president.

The country is also asking Saudi Arabia to help locate Khashoggi’s body, which still has not been found. Erdogan said Riyadh must disclose the identity of an alleged local collaborator said to have been involved in disposing Khashoggi’s body.

In her strongest public comments yet on the subject, she said international experts should have complete access to evidence and witnesses.

She added: ‘I urge the Saudi authorities to reveal the whereabouts of his body without further delay or prevarication.’

Saudi Foreign Minister Adel al-Jubeir has said the kingdom will try the perpetrators and bring them to justice after the investigation is completed.