Denise Fergus, the mother of James Bulger, revealed she only discovered the government had rejected her calls for a public inquiry into the handling of her son’s killer from Twitter

TV viewers have backed James Bulger’s mother’s call for a public inquiry into the handling of her son’s killer Jon Venables  after she insisted: ‘He’s laughing at us.’

James was tortured and left on a railway line by ten year olds Jon Venables and Robert Thompson in 1993 in a crime which shocked Britain.

Venables’ repeated reoffending since his release from youth custody has led to James’s mother, Denis Fergus, calling for a public inquiry into the case.

But despite a petition calling for a review now having more than 200,000 signatures, the government rejected the move last week.

Speaking on ITV’s This Morning today, Mrs Fergus said she doesn’t believe Venables can be rehabilitated and wants to know why he keeps being freed.

She told the shows presenters Phillip Schofield and Holly Willoughby: ‘After all the money that has been spent on him, he’s just laughing at everyone. He’s laughing at the government, he’s laughing at us and he knows he can get away with it and he’s doing whatever he wants.’

She revealed she only heard ministers had rejected the calls through Twitter as she was preparing to go to visit her son’s grave. 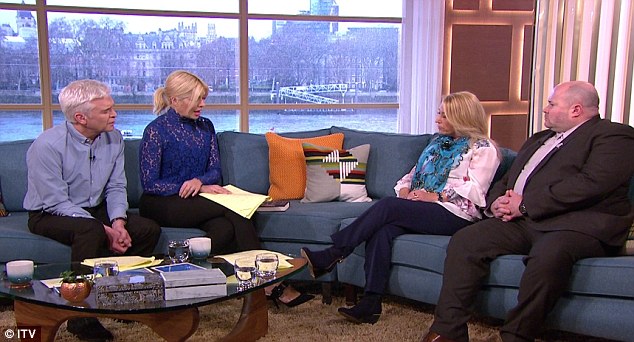 Mrs Fergus and her new husband Stuart appeared on ITV’s This Morning today. It was the 25th anniversary of her son’s killing last week 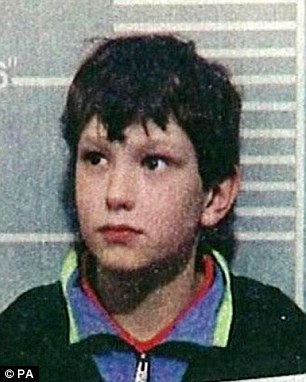 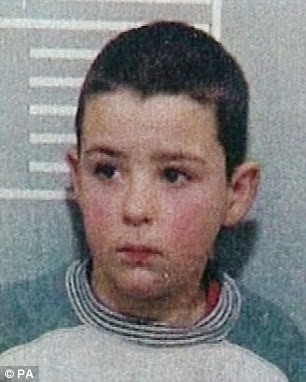 James Bulger was killed by Jon Venables and Robert Thompson in a crime which repulsed the country in 1993. Mrs Fergus is angry so little is know about why they were released so quickly

She said: ‘I want to know why they rejected the petition. Doesn’t public opinion count any more?

‘They were meant to respond after we reached 10,000 signatures, but we never got no response from them.

‘They chose to respond on the 25th anniversary when we were getting ready and spend the day at the cemetery. And they even got his name wrong.

‘Someone tagged me in to something on Twitter to say “Have you seen this?”. I was getting ready to go to the cemetery and I got it with that.’

Mrs Fergus only recently discovered that James was sexually abused before his death and believes the parole boards who freed Venables did not know the full facts.

Mrs Fergus told This Morning she did not want her son’s killers to be locked up for ever, but feels they were released too soon and should have spent time in an adult prison. 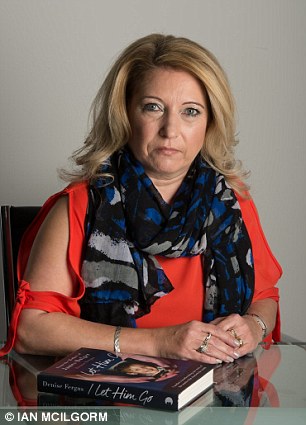 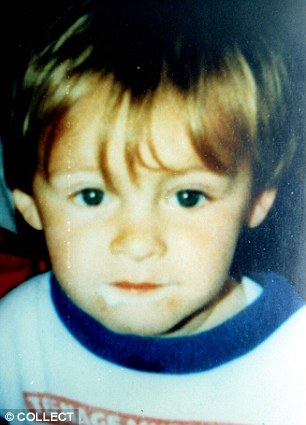 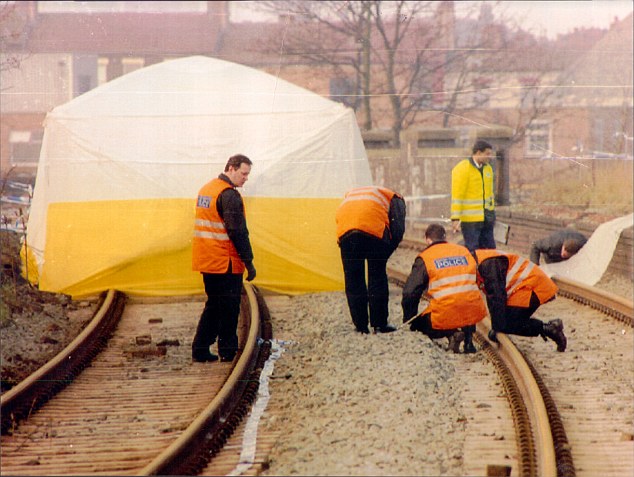 She said she feels like they have been ‘rewarded, not punished’ for the horrific crime they carried out.

She has now written a book about her experiences, saying she was worried she was starting to forget the good memories she has of James.

She said: I became like two people. Like James’s mum, fighting and campaigning. But once I’d done all that and I went home to the boys [her other sons] I become their mum and it never got spoke about because I didn’t want my boys to sense my feelings about James, so I kind of was two people.’

One wrote on Twitter: ‘I really do feel for Denise Fergus. She has been so strong, don’t stop fighting for justice for James and the victims Venables has since affected. Venables has shown nothing but contempt, he continues to offend. The justice system has protected the wrong people.’ 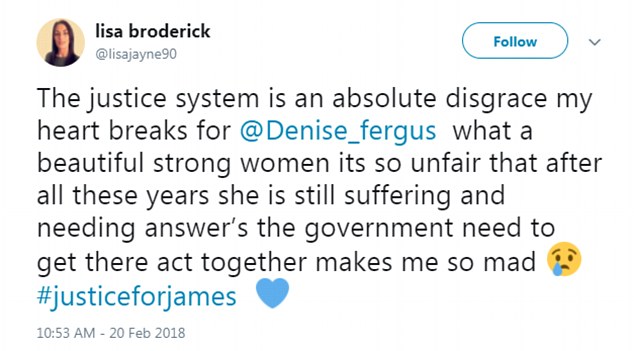 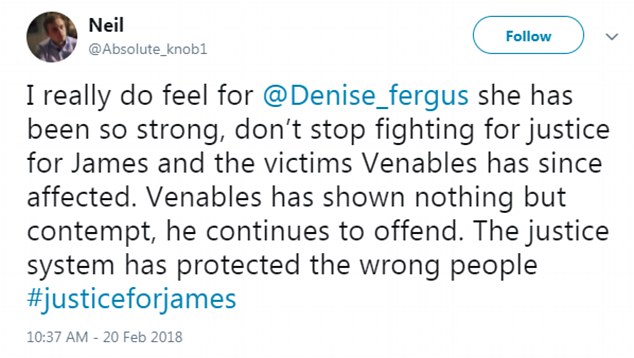 Lisa Broderick added: ‘The justice system is an absolute disgrace my heart breaks for Denise Fergus. What a beautiful strong women its so unfair that after all these years she is still suffering and needing answer’s the government need to get there act together makes me so mad.’

Nikki Hayes wrote: ‘Absolutely disgusting that Denise Fergus has only found out recently that her son James Bulger was sexually abused before he was murdered. She’s a tower of strength, she was badly let down by the law.’

Ms Fergus’ comments come after it was revealed that Venables has a secret girlfriend who knows about his vile past and his convictions over child abuse images.

The woman was told of her new boyfriend’s true identity when their relationship got serious but she stood by him.

She was even at Venables’ house when police discovered his sickening hoard of child sex images and plans to visit him in prison after he was jailed for 40 months, according to The Sun.

The woman does not have any children but is believed to have primary school-age relatives.

Venables is currently serving 40 months in prison after pleading guilty to having more than 1,000 indecent images of children at a trial at the Old Bailey earlier this month.