A Justice Department inspector general has concluded former FBI Director James Comey did not ‘live up’ to his responsibility to safeguard sensitive information – but has not recommended he be prosecuted for the leak of memos of his awkward conversations with President Trump.

Comey ‘failed to live up to this responsibility’ to protect internal information as other FBI agents are expected to, according to the report published Thursday.

But the IG wrote: ‘We found no evidence that Comey or his attorneys released any of the classified information contained in any of the Memos to members of the media.’

‘And to all those who’ve spent two years talking about me “going to jail” or being a “liar and a leaker”—ask yourselves why you still trust people who gave you bad info for so long, including the president,’ Comey wrote.

According to the IG: ‘What was not permitted was the unauthorized disclosure of sensitive investigative information, obtained during the course of FBI employment, in order to achieve a personally desired outcome’ of getting a special counsel appointed – Comey’s stated goal.

‘The OIG has provided this report to the FBI and to the Department of Justice Office of Professional Responsibility for action they deem appropriate,’ it said – a referral below a recommendation of sending it to a prosecutor.

Comey memorialized his personal interactions with President Trump, both during the transition and during the first months in the White House. 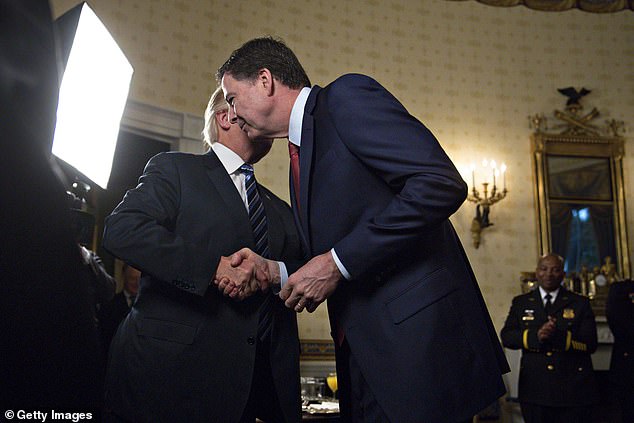 Comey took notes immediately afterward and created memos, which he retained after Trump fired him.

Among other things, Comey’s memos featured Trump asking him to let the matter involving former National Security Advisor Mike Flynn go, as well as a request for ‘loyalty.’

Comey ultimately provided the memos to a friend, and a New York Times report on their content helped lead to the appointment of Special Counsel Robert Mueller.

According to the IG investigation: ”We conclude that Comey’s retention, handling, and dissemination of certain Memos violated Department and FBI policies, and his FBI Employment Agreement.’

Comey maintained the memos were his own. However, ‘Comey’s characterization of the Memos as personal records finds no support in the law and is wholly incompatible with the plain language of the statutes, regulations, and policies defining Federal records, and the terms of Comey’s FBI Employment Agreement,’ according to the IG.

However, they did not find Comey responsible for the leak of any classified material – which could have brought a serious sanction.

‘We found no evidence that Comey or his attorneys released any of the classified information contained in any of the Memos to members of the media,’ investigators found.

Comey highlighted that passage on Twitter Thursday, then added: ‘I don’t need a public apology from those who defamed me, but a quick message with a “sorry we lied about you” would be nice.’

The report also said Comey failed to notify the bureau that memos after he left the FBI.

‘Comey violated Department and FBI policies, and the terms of his FBI Employment Agreement, by retaining copies of [the memos] after he was removed as Director, regardless of each Memo’s classification level,’ the IG found.

Comey testified that he wanted the memos out because ‘I thought it might prompt the appointment of a special counsel.’ At the time, there was considerable debate over whether the Justice Department then headed by Attorney General Jeff Sessions would be able to carry out an impartial investigation that involved so many key players in the administration.

The FBI reviewed the memos in 2017 and found information was classified at the ‘SECRET,’ ‘CONFIDENTIAL,’ AND ‘For Official Use Only’ level.

The report is direct on the question of ownership. All information acquired by FBI personnel in connection with their official duties ‘is the property of the United States.’ Internal policy states that disclosures to the media ‘must not address an ongoing investigation.’ Comey was in a position to know that and FBI counterintelligence investigation was underway.

A timeline of the investigation begins January 6, 2017, when Comey and Intelligence Community directors ‘meet with President-elect Trump and his national security team at Trump Tower to discuss the Intelligence Community Assessment; Comey then meets with the President-elect one-on-one to alert Trump to “salacious and unverified” allegations about his 2013 trip to Moscow that the media may soon publish.’

That is a reference to the infamous ‘Golden Showers dossier,’ which referenced unverified allegations about Trump’s conduct with prostitutes in a Moscow hotel room during the Miss Universe pageant. Comey testified that he told Trump about it because he wanted him to know the information was out there.

Comey completed a memo January 28, 2017 a day after having dinner with Trump. He wrote that Trump said he expected ‘loyalty.’

On Valentine’s Day, 2017, Comey writes a memo about Trump saying he hopes Comey can ‘see [his] way clear … to letting Flynn go,’ at a time when there was an active investigation of Michael Flynn. Comey wrote the memo on his own laptop, put a copy in his home safe, and gives a second signed copy to his FBI chief of staff. In a March 30 Comey memo, Trump asks what he ‘could do to lift the cloud’ of the Russsia investigation. All the memos featured in the Mueller report.

The 83-page report reconstructs the events surrounding each of the memos and how they were created.

In the case of Comey’s January 7 meeting with Trump, he met with senior FBI officials including chief of staff James Rybicki and former Deputy Director Andrew McCabe. They wanted the meeting to be one-on-one so Comey could present ‘salacious’ information in the ‘most discreet’ way, according to the IG.