James Franco’s girlfriend Isabel Pakzad wowed in a bikini as she spent the day at the beach with her actor love in Mykonos, Greece on Tuesday.

The actress, 29, who has been dating the hunk, 44, since 2018, slipped into a tiny blue string bikini which displayed her cleavage, taut midriff and peachy posterior as she soaked up the sun.

Her tresses were styled in soft waves and she showed off her radiant complexion by going make-up free. 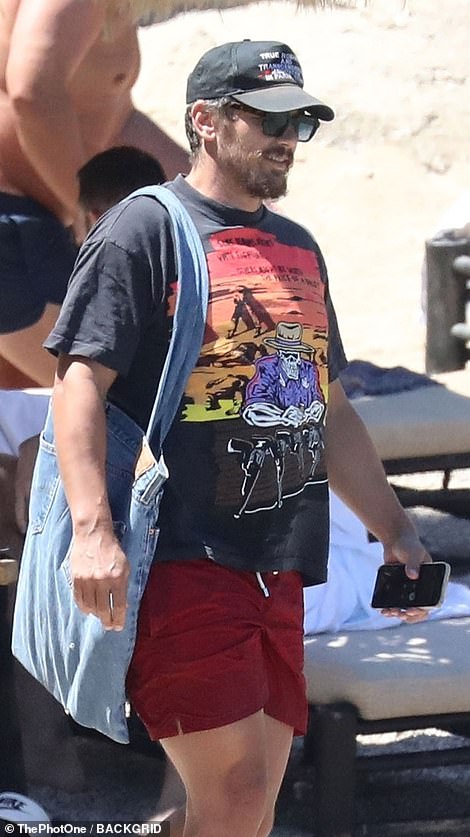 Beach day: James Franco’s girlfriend Isabel Pakzad wowed in a bikini as she spent the day at the beach with her actor love in Mykonos, Greece on Tuesday

127 Hours star James wore a graphic print tee, shorts and a baseball cap, teamed with shades as he strolled down the beach.

The couple were seen enjoying one another’s company as they took a refreshing dip together, after a boat ride.

Isabel also showed off her enviable frame as she dived into the sea while James took in the sights. 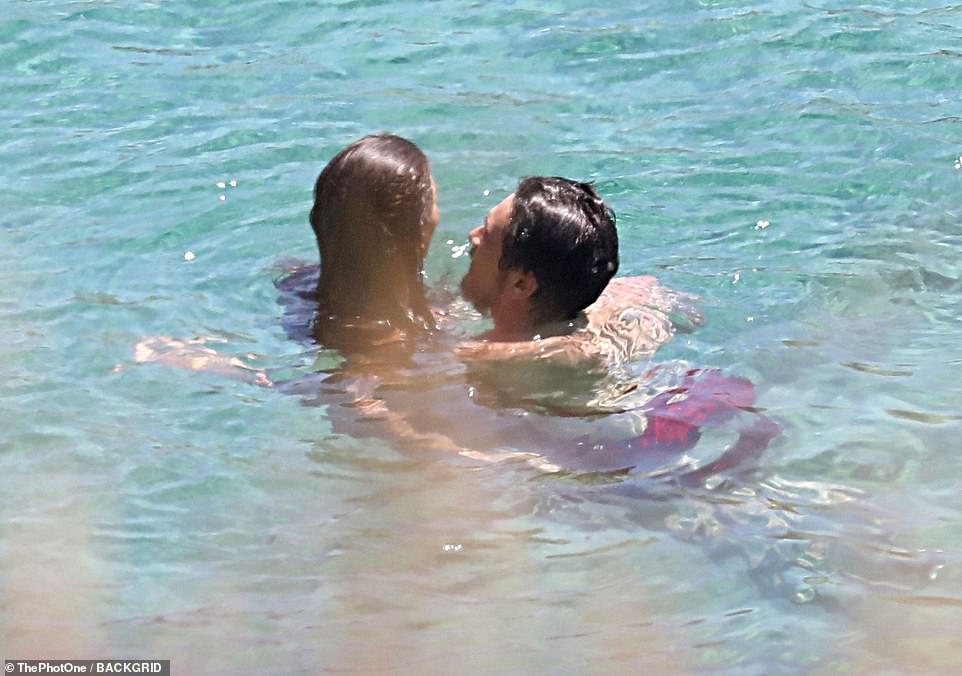 PDA: The couple were seen packing on the PDA as they embraced in the water 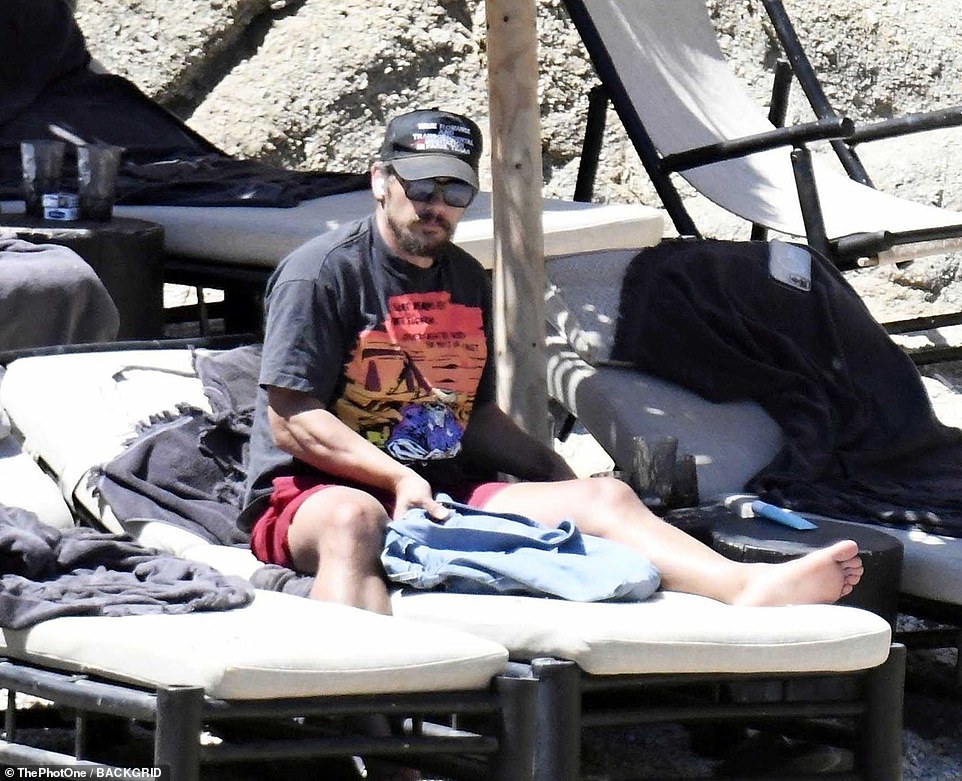 Kicking back: James looked relaxed as he took in the sunshine on his break 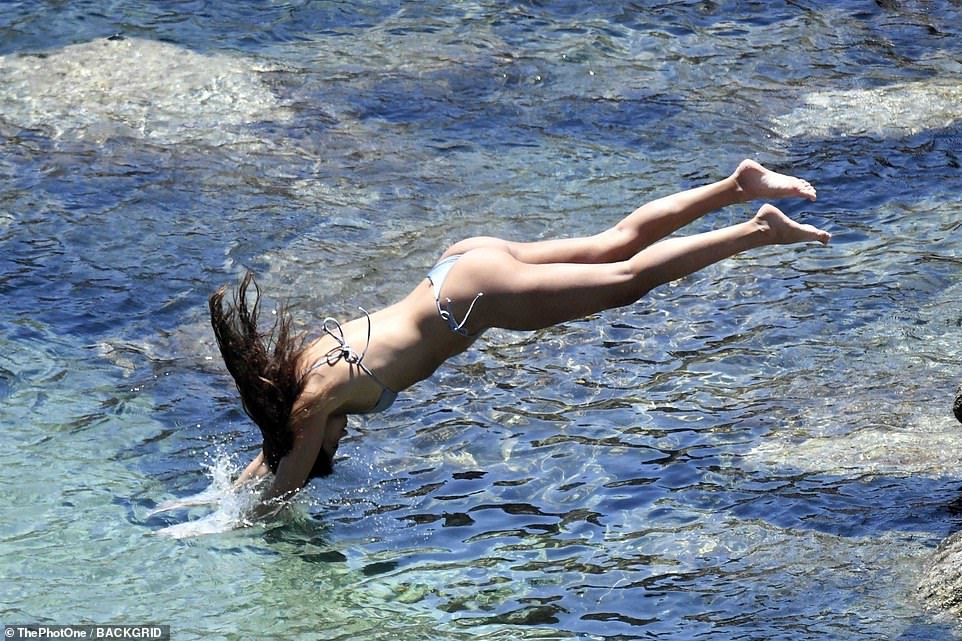 Cheeky: Isabel showcased her toned frame as she dove into the clear waters 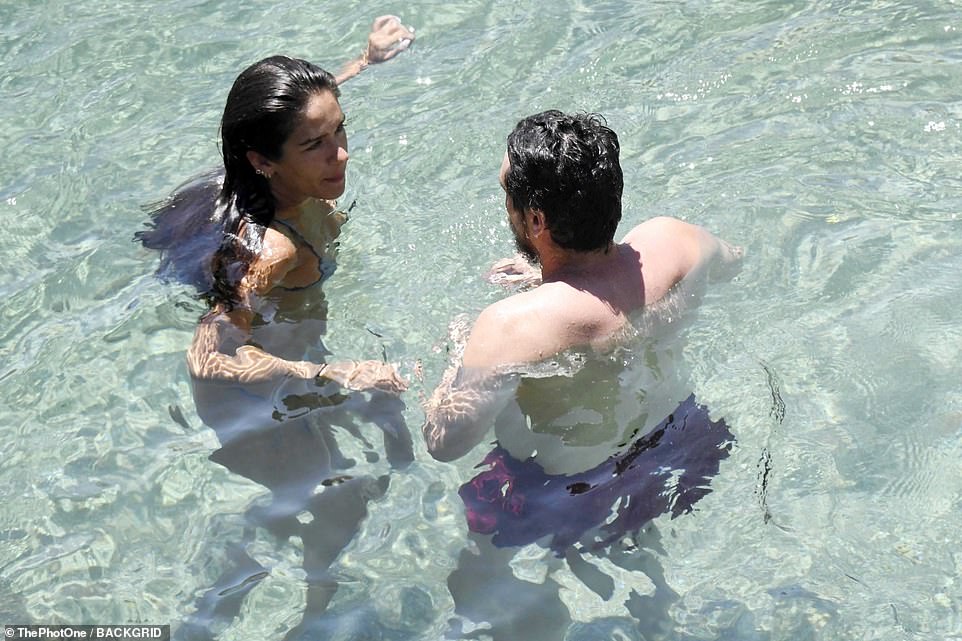 Chat: The couple were seen enjoying a refreshing dip in the sea

The loved-up pair reportedly started dating in November 2017 but have largely kept their romance out of the spotlight over the years.

At the time, it was believed the actor decided against going public with their relationship after had made headlines for alleged sexual misconduct just weeks into their romance.

The actor, who previously taught film courses at New York University and other colleges, was reported in 2018 to have ‘abus[ed] his power as an acting teacher in a sexually exploitative manner.’ 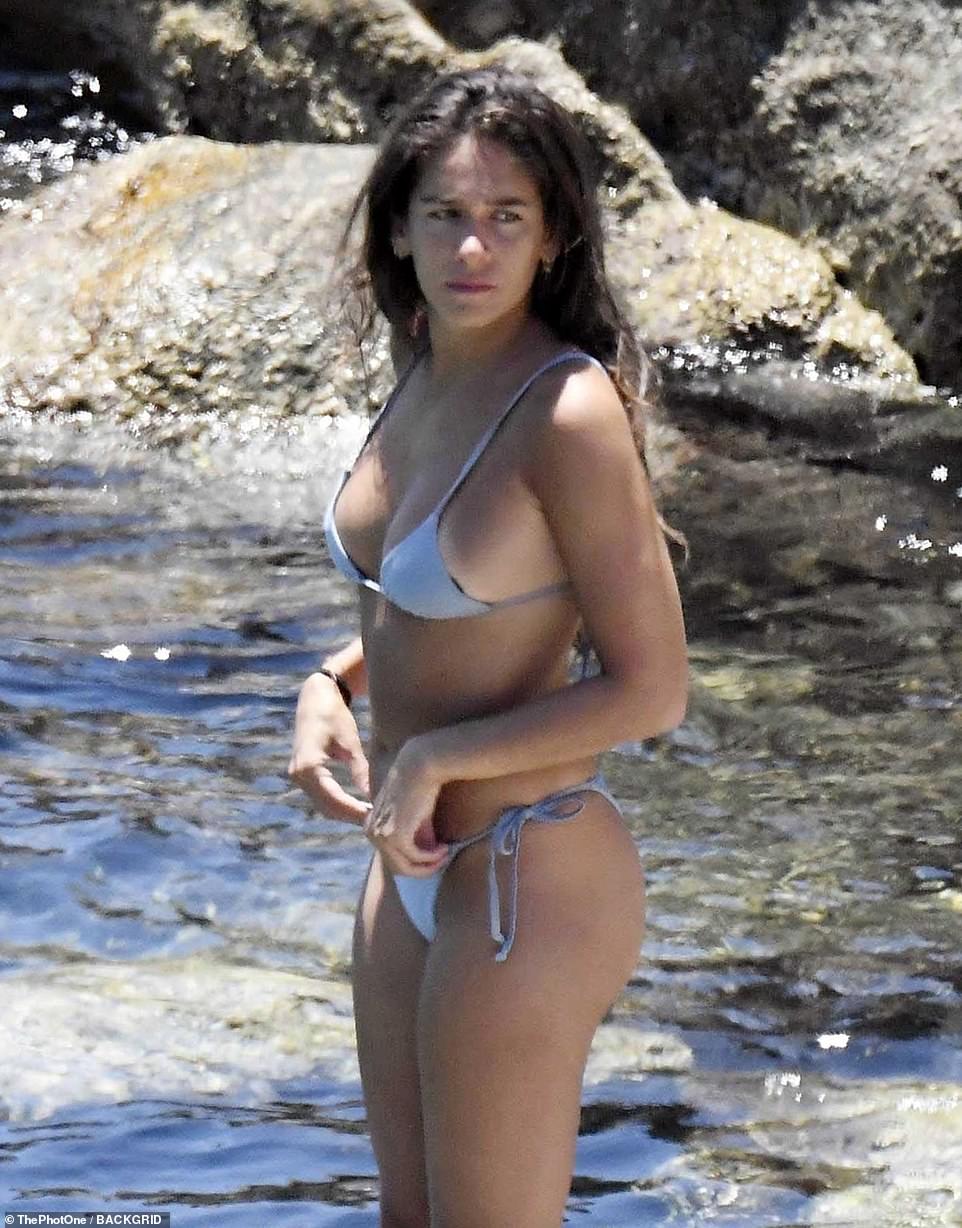 Wow: Isabel looked incredible as she took in the scenic sights of Mykonos 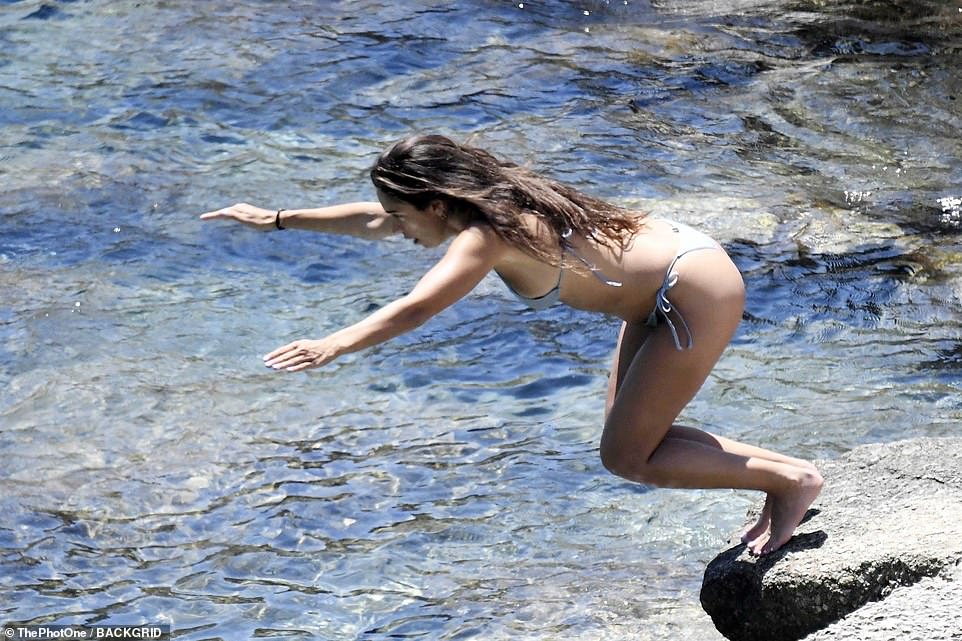 Dive in: Isabel looked sensational as she dove into the water during their break 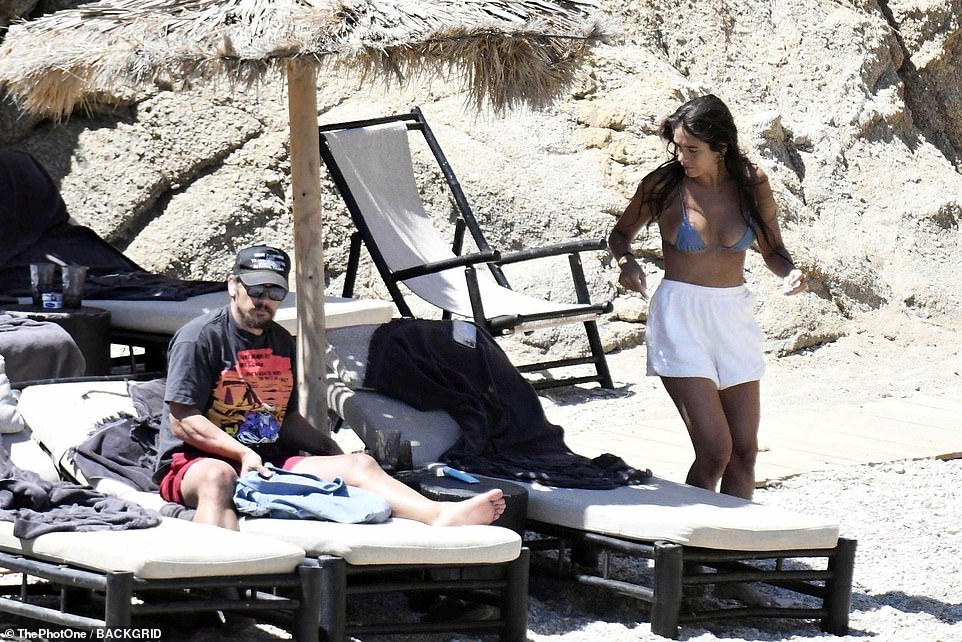 Sunsoaked: The couple looked in good spirits as they walked down the beach 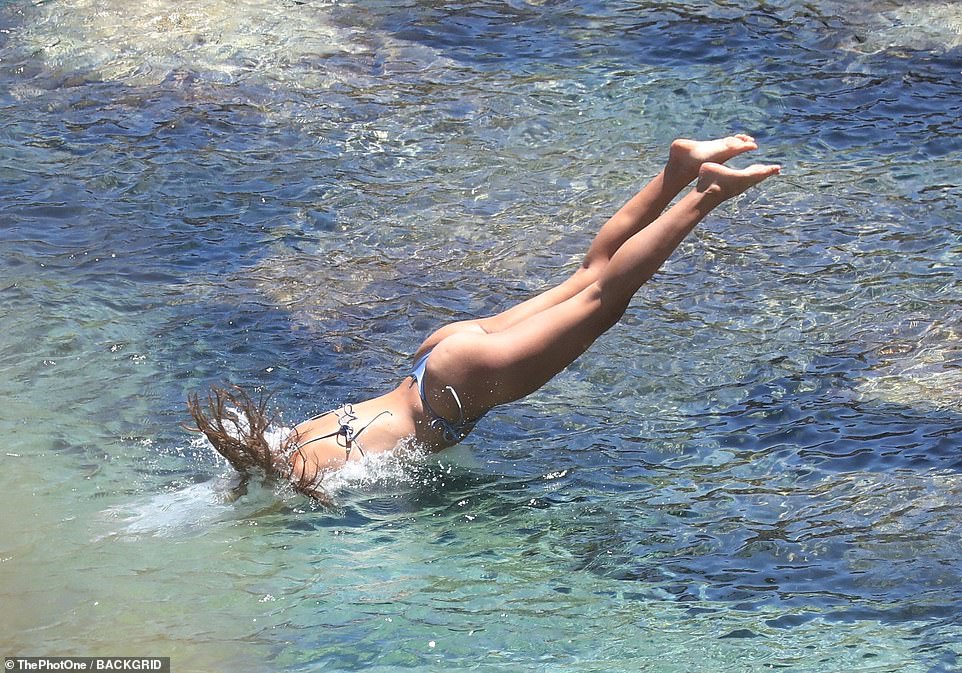 Splash: Isabel showed off her toned frame as she dove into the water

James publicly addressed the matter for the first time since the allegations emerged on a SiriusXM podcast last December, admitting he slept with students at his acting school and ‘cheated on everyone’ he dated during a 20-year battle with ‘sex addiction.

Speaking on The Jess Cagle Podcast, James confessed he ‘did sleep with students, and that was wrong.’

He also admitted he could ‘never be faithful to anybody’ before he met Isabel.

The 127 Hours star blamed his infidelities and inappropriate behavior on a sex addiction he has suffered from since giving up alcohol as a teenager. 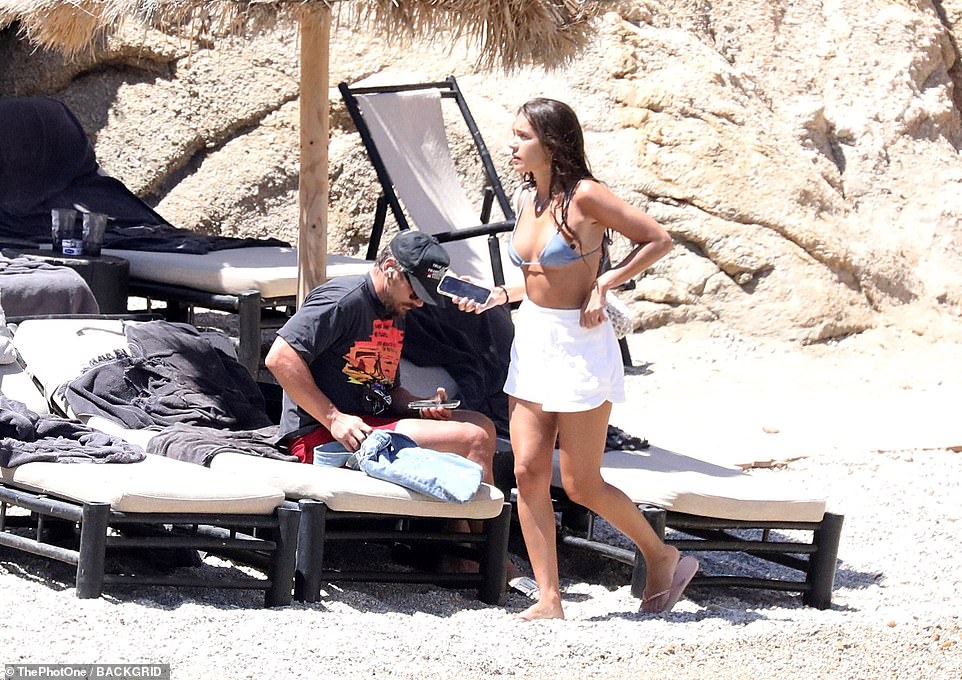 Leggy: Isabel slipped on a white skirt as she walked around the beach

Toned: The beauty looked incredible in her skimpy bikini at the beach 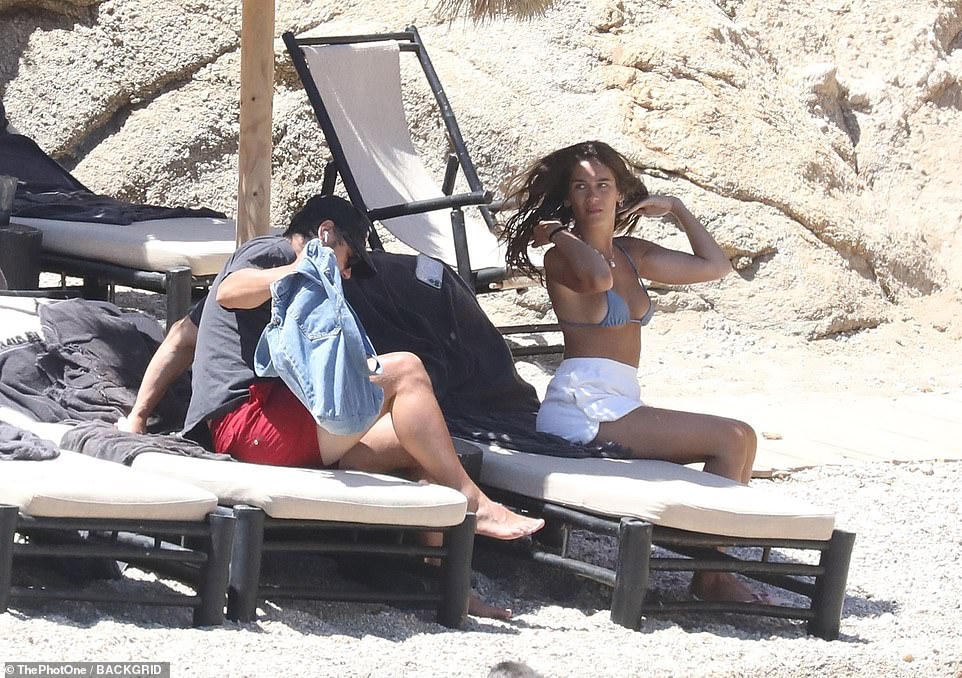 Fun: The star looked relaxed as he chatted with his long-term girlfriend 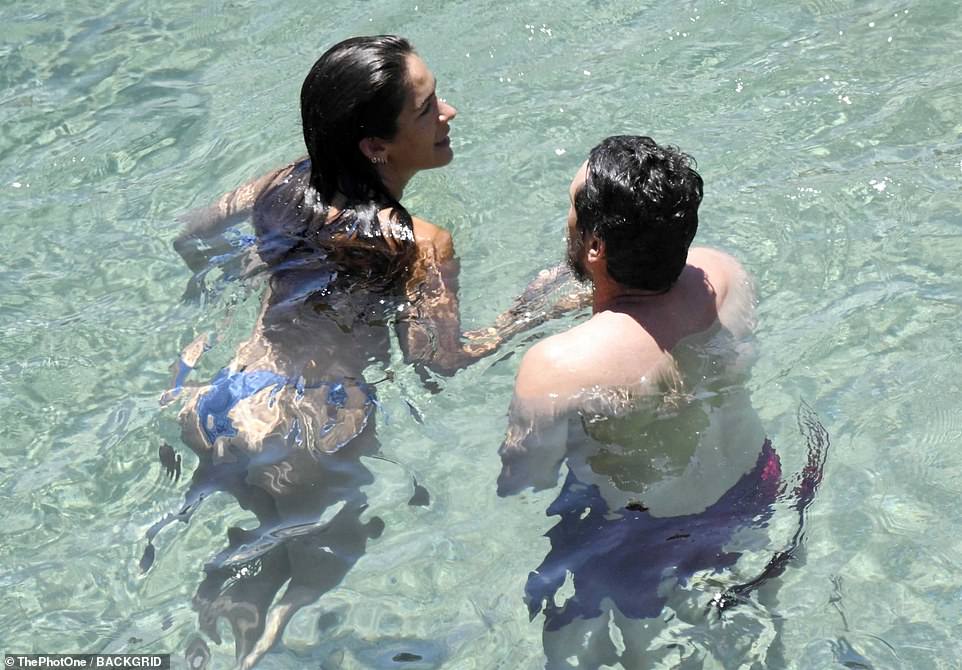 Relaxed: James and Isabel looked more loved-up than ever as they swam 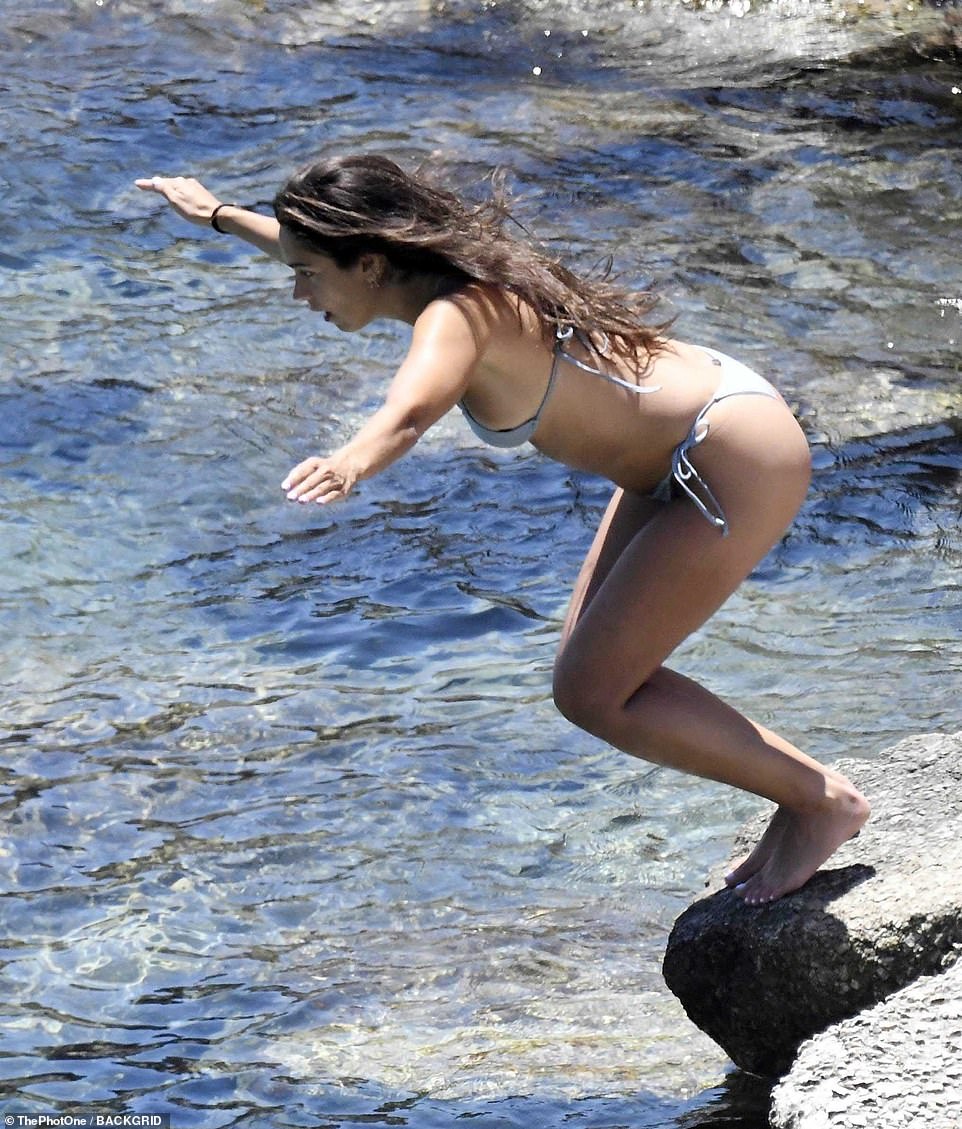 Wow: Isabel looked sensational in her tiny string bikini as she swam 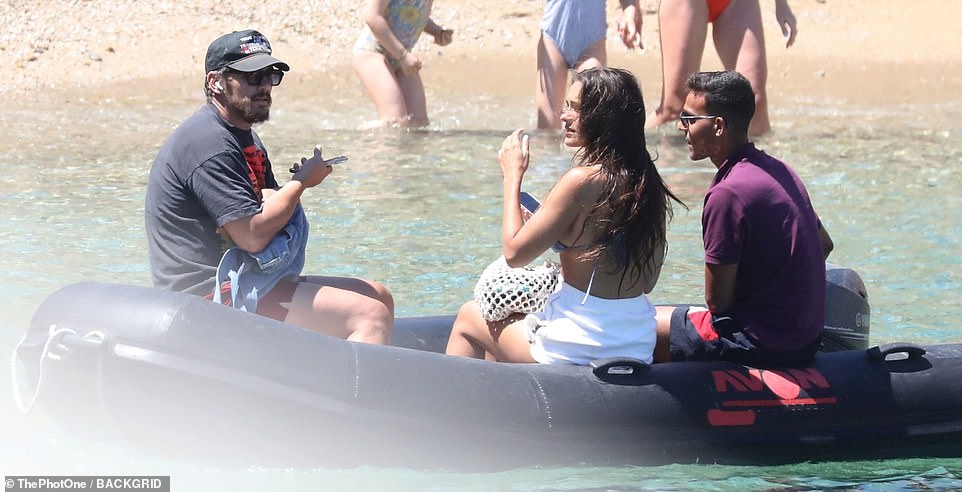 Chat: The pair were seen chatting on a dinghy as they relaxed on holiday

‘It’s such a powerful drug,’ he explained. ‘I got hooked on it for 20 more years. The insidious part of that is that I stayed sober from alcohol all that time.

‘And I went to meetings all that time. I even tried to sponsor other people. So in my head, it was like, ‘Oh, I’m sober. I’m living a spiritual life.’ Where on the side, I’m acting out now in all these other ways, and I couldn’t see it.’

James said he has been in recovery from sex addiction since 2016 and has ‘been doing a lot of work’ after the allegations against him ‘and changing who I was.’

‘I didn’t want to hurt people,’ he said.

James also revealed that while he did sleep with students at his acting school, he thought it was ‘cool’ because it was ‘consensual’ and they were all adults.’

Casual cool: James cut a casual figure in his sporty ensemble at the beach 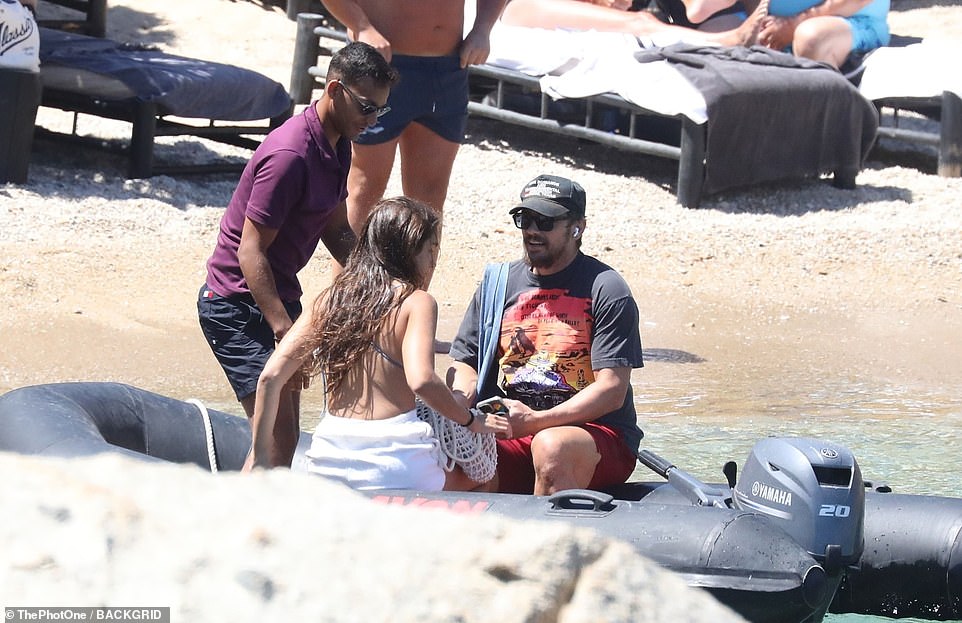 Beach: The pair arrived back on the golden sands as they continued their break 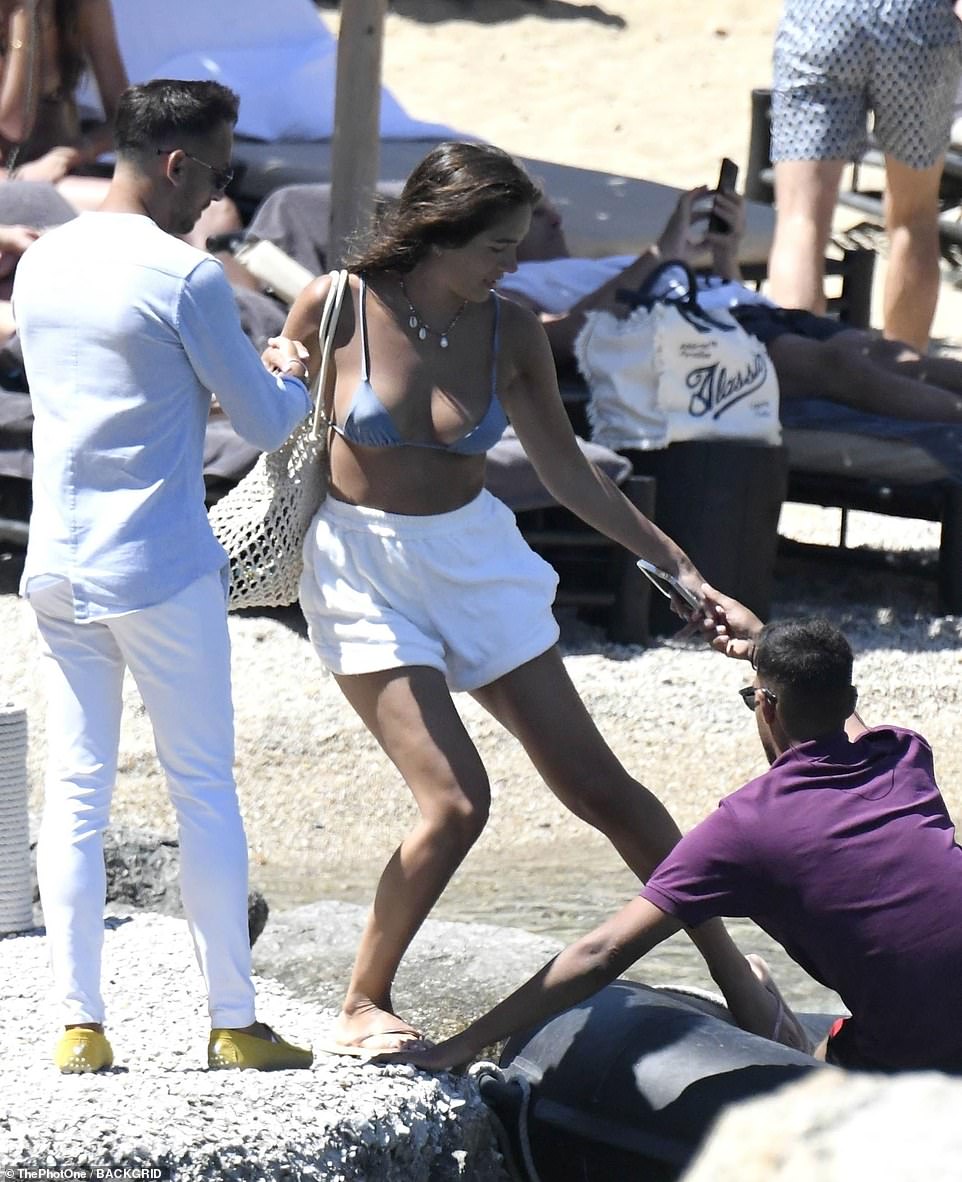 Off they go: Isabel showed off her beach style as she stepped aboard a boat

‘But, like I said, it’s not why I started the school. And I wasn’t the person who selected the people to be in the class. So it wasn’t a master plan on my part, but yes, there were certain instances where, you know what, I was in a consensual thing with a student and I shouldn’t have been.

‘I suppose at the time my thing was, if it’s consensual, OK. Of course I knew, I talked to other people, other teachers, yeah, it’s probably not a cool thing. [But] at the time, I was not as clear-headed as I’ve said. So I guess it just comes down to my criteria: If this is consensual, it’s cool. We’re all adults,’ he said.

During the discussion, James opened up about how he struggled to stay faithful to anyone and cheated on all of his past girlfriends.

He said: ‘I had girlfriends. I could never be faithful to anybody. I cheated on everyone before Isabel.’

James cited his 20-year battle with sex addiction as the main reason for his rampant adultery, an issue he’s been successfully battling for the past five years.

‘I was in recovery before, for substance abuse. And there were some issues that I had to deal with that were also related to addiction.

‘And so I’ve really used my recovery background to kind of start examining this and changing who I was,’ he explained. 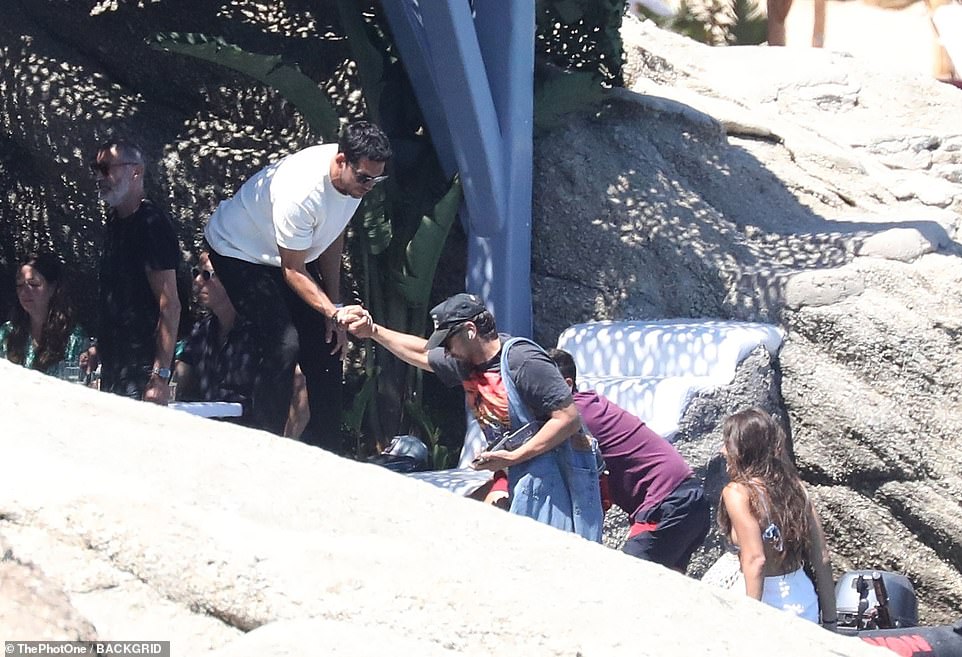 Off he goes: James was given a hand up as he stepped off the boat 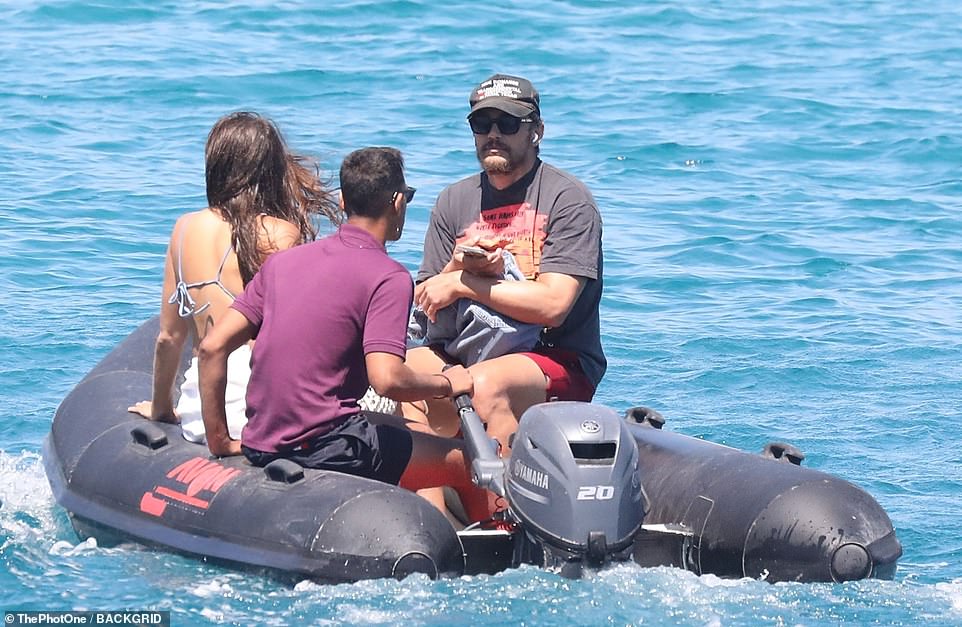 Couple: The loved-up pair reportedly started dating in November 2017 but have largely kept their romance out of the spotlight over the years