A drug-crazed thug who brutally bashed a female paramedic who tried to help him believed if he took enough drugs he could ‘reach another dimension’.

James Haberfield, 22, punched Monica Woods in the face after consuming ‘a cornucopia’ of drugs at Victoria’s Rainbow Serpent festival in January.

In August, Haberfield became the first person under new Victorian laws to be slapped with a compulsory treatment order for attacking emergency workers.

However he avoided a minimum six-month jail term when Magistrate Simon Zebrowski accepted the woman basher had an ‘impaired mental state’ that had more to do with a pre-existing autism spectrum disorder and major depressive disorder than the drug cocktail he’d consumed. 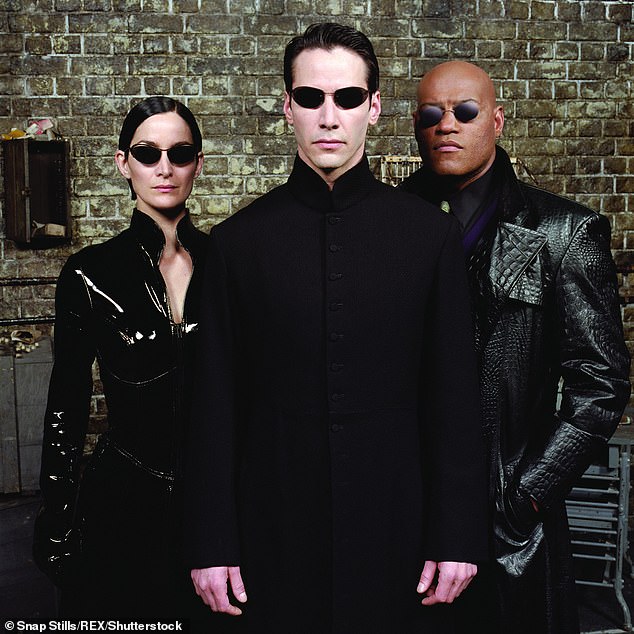 Thug James Haberfield believes drugs can evolve’ him to reach another dimension. The court heard he watched and read literature about the strange sub-culture. Some believe drugs can ‘extract them from The Matrix’ – a popular movie featuring Keunu Reeves (centre) who escaped a video game life by taking a pill

In appealing the decision, the County Court of Victoria on Wednesday heard Haberfeld had believed if he got wasted enough he could ‘reach the next level of evolution’.

Haberfield had been jacked-up on LSD, amphetamines, ecstasy and ketamine when he assaulted the paramedic.

He is hoping he can avoid what the Victorian Government intended to be mandatory jail sentences for people who seriously injure emergency services workers.

In a shock development last month, his barrister David Hallows, SC said a psychiatrist who had previously assessed his client now believed he suffered from schizophrenia.

Under the mandatory sentencing laws, a judge can release an offender if its determined they had impaired mental function or displayed other exceptional circumstances.

Forensic psychiatrist Dr Andrew Carroll told the court he now believed Haberfield was an undiagnosed psychopathic schizophrenic before he attacked the paramedic.

He said Haberfield had been delving into the subculture of ‘DMT’ when he went on his drug-fueled bender at the ‘dance’ festival.

Dr Carroll said the subculture saw its followers take drugs in order to ‘reach the next level of evolution’.

Experts on the so-called ‘Spirit Module’ – referred to by Dr Carroll as the ‘God Module’ –  claim Dimethyltryptamine can bring on out of body or near death experiences, intense hallucinations and even apparent alien abductions.

Website World of Lucid Dreaming described DMT as a naturally occurring ‘tryptamine’, which are a group of substances found in nature that mimic the chemical structure of serotonin.

Although many believe the chemical acts as a kind of molecular code that allows people to ‘exit our simulated universe’ – similar to the hit movie ‘The Matrix’.

‘There is more to life than what we know,’ he said of Haberfield’s belief.

Dr Carroll said it was his opinion that Haberfield’s mental problems had been undiagnosed before he went on the bender that saw him assault the paramedic.

However, he accepted had Haberfield not got so trashed, he would not have attacked his victim.

Police and prosecutors say there should be no doubt about what caused Haberfield to attack the way he did. 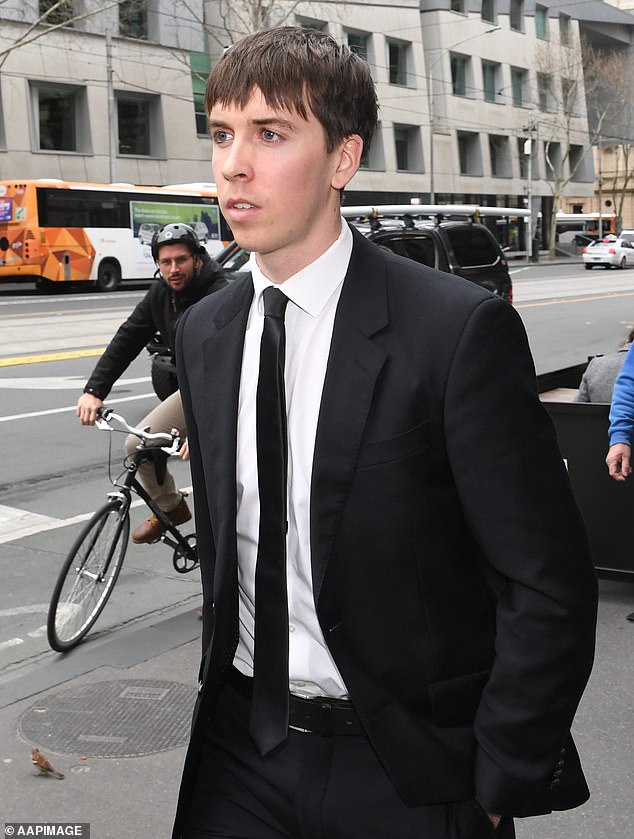 Coward: James Haberfield leaves the Melbourne Magistrates Court in Melbourne in August after he avoided what should have been a mandatory sentence for bashing a paramedic 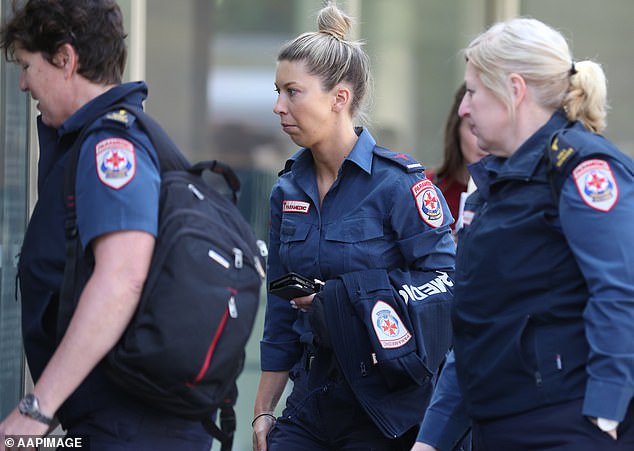 Paramedic Monica Woods (centre) was flanked by colleagues as she left court on Wednesday in Melbourne. A large group of paramedics have attended each court hearing, which continues to drag on

It was ‘soley’ the drugs, a prosecutor said.

But Mr Hallows argued if Judge Michael Tinney ruled against his medical argument, he should cut Haberfeld loose because his autism and mental illness would make his time in jail more onerous.

At a hearing last month, Ms Woods took to the witness box to deliver a heart breaking victim impact statement.

It was second time she had been forced to re-live her nightmare after previously appearing in the magistrates’ court where her attacker avoided justice.

She was in court again on Wednesday backed by dozens of her colleagues.

Ms Woods cried when the initial sentence against Haberfield was delivered and again broke down in tears at her last appearance.

The paramedic of nine-and-a-half years told Judge Tinney she had not returned to work since the attack and suffers from post-traumatic stress disorder and anxiety.

‘I have lost all of my independence due to this assault,’ she wept.

Ms Woods said she feared for her life during the attack and continued to re-live it day after day. 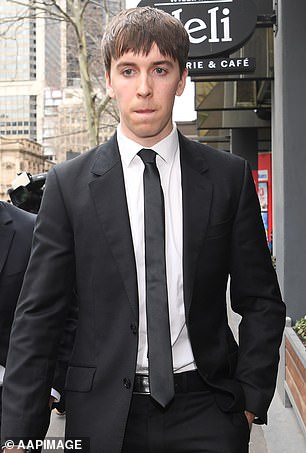 The court heard Haberfield went missing in an ‘acutely psychotic state’ after the four-day alternative music and arts festival, during which he’d consumed ‘a cocktail of drugs’.

The university student knocked on the door of a Coburg home, walking inside and terrifying the residents, who were unknown to him.

When the ambulance arrived to collect him, Haberfield punched Ms Woods in the face and put her in a headlock, squeezed and pinned her to the rear corner of the ambulance.

Haberfield stayed in hospital for more than a week receiving treatment.

Ms Woods suffered whiplash to her head and neck, a hematoma and swelling to her cheek, as well as her psychological trauma.

The incident disgusted the community, with Victorian Premier Daniel Andrews calling on the Director of Public Prosecutions to urgently consider appealing the sentence.

‘Our thoughts are with the victims of this completely unacceptable attack,’ he said in a statement. 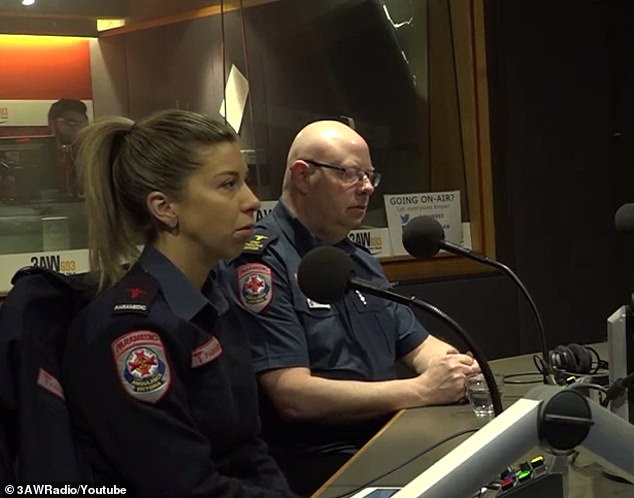 Prosecutors appealed the sentence on September 17, arguing Mr Zebrowski had got his sentence wrong.

The magistrate said Haberfield, in a psychotic state, had a delusional belief his safety was at risk after the ‘cornucopia of illicit drugs’ he’d ingested.

‘I stood up again and he grabbed me around the throat, neck and head and placed me in a headlock, and punched my face. I attempted to get out of the headlock fearing for my life, and I felt in danger. ‘

‘When I saw my reflection in mirrors and windows , I was constantly reminded of the assault as a physical injury, with bruising and discolouration being visible for weeks post assault.’

‘I experience recurring thoughts of the incident, playing over and over in my mind, which often become so overwhelming, resulting in significant anxiety, panic attacks and feeling like I’m going to vomit.’

‘My sense of independence has been taken away from me. I have always been secure and independent, being able to provide for myself, pay off my own mortgage on my own and work extremely hard to (be) where I am today.’

‘There is ongoing uncertainty, especially as to whether my injuries are permanent in nature, and quite importantly, whether I will be able to return to my original duties as a paramedic prior to the assault.’

A psychiatric expert said he would be at an ‘acute risk’ of suicide in jail.

Mr Zebrowski said sending the ‘mortified, dismayed and deeply ashamed’ young man to jail ‘would have a disproportionate and catastrophic effect’ on his future.

‘The message needs to be sent to the community that emergency workers are not punching bags,’ he said, before giving Haberfield an 18-month community corrections order including mental health and drug treatment.

Ms Woods lashed out at the sentence in the magistrates’ court, telling Melbourne radio the legal system let down both herself and her fellow emergency workers.

‘You work in an office and you don’t expect to be assaulted, or punched in the face or pinned to the desk… we’re entitled to go to work and be safe and this guy has taken my career away from me for the moment,’ she told 3AW’s Neil Mitchell.

Ms Woods said she was deeply disappointed in the result and claimed the effects Haberfield had on the paramedics went unnoticed.

‘I think he [Haberfield] has been treated like the victim here and I, too have had catastrophic effects of all of this on myself,’ she said.

‘There’s no punishment for him putting drugs in his system, and punching me in the face, and pinning me at the back of the ambulance.’

The young paramedic said she was disappointed as she believed the mandatory sentencing was a ‘safety buffer’ for emergency workers to feel as though they were safe at work.