Among James Martin’s legions of fans are the fun-loving Martinis – a group of ladies who pose nude for a calendar for him every year with strategically placed cakes and profiteroles to cover their modesty.

They even managed to secretly track down his car at Chatsworth House in Derbyshire, which meant he opened their most recent calendar to find Miss July sprawled naked over his bonnet – save for three pastries of course.

‘The Martinis have been sending me their calendar as a joke for 28 years, and each year the cakes get bigger,’ laughs James.

This will come as no surprise if the Martinis have been faithfully following James’s recipes, because their rock god chef has never been one to skimp on full-fat ingredients.

So who better to dedicate an entire book to the joys of butter than James? In fact, his first suggestion was to call the book simply Fat, but that was boffed off in favour of the more woke title of Butter.

A down-to-earth Yorkshireman who doesn’t hesitate to call a spade a spade, James may well get away with this. His twinkling eyes and sexy, slightly unshaven face help too, of course.

As such, in a world where we’re no longer supposed to eat butter, or salt for that matter, James has had more people going bonkers over his new book than any other he’s written. He even had to come off social media because he was inundated with messages.

‘The response has been overwhelming,’ he says. ‘Chefs treat butter like olive oil, and for me it’s always been about the food – delicious food. You can’t produce good-quality food with margarine – it’s s***. Do we need to be lectured? Can we just enjoy it for what it is?

‘Butter is a natural ingredient. I’ve spent my entire career using butter without compromise and without substitute, mainly because there isn’t one. We shouldn’t take butter for granted. It’s such an essential part of our food lives right across the globe that it’s a wonder many more haven’t written books on it before. Butter is unique and natural, and we don’t have to kill an animal to produce it.’

In the book, James not only shares some of his favourite new dishes and old classics – everything from savoury delights like roast crab with lime and chilli butter, Barnsley chops with goat’s cheese butter, chicken with ’nduja butter and Dover sole meunière to sweet treats including cinnamon bread with caramel butter dip, shortbread and baklava – but he also shows us how to make all kinds of butter, including flavoured ones such as chilli, red wine and Marmite. 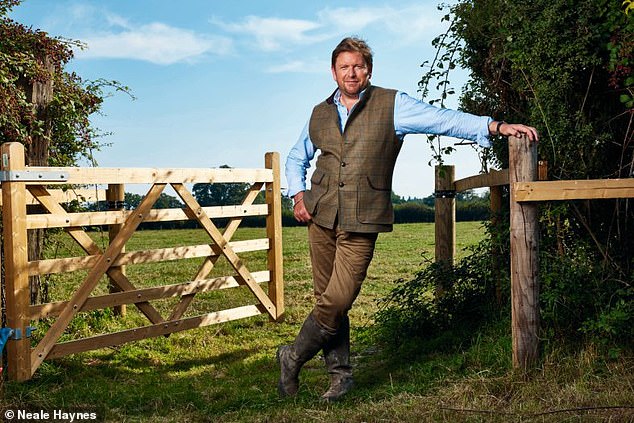 They even managed to secretly track down his car at Chatsworth House in Derbyshire, which meant he opened their most recent calendar to find Miss July sprawled naked over his bonnet – save for three pastries of course. Pictured, James

‘Butter from supermarkets has a lot of water content, but real butter snaps like Dairy Milk chocolate. Once you’ve tasted real butter you’ll never go back,’ he explains. ‘And yet people think butter grows on trees. They don’t realise the taste depends solely on the time of year, where the cream comes from, which in turn depends on the breed of cow as well as the pasture it feeds on – the whole process is a simple but complex one. No two cows produce the same milk and cream, and therefore butter will always taste a little bit different.’

James and his team wrote the book in 21 days during lockdown and photographed the dishes on the floor of his Hampshire home. The whole thing was completed in nine weeks from start to finish. But then James’s life has always been lived at top speed. When he was eight he predicted he’d be a head chef by 30, have his own restaurant by 35 and a Ferrari by 40. He achieved all these goals by 24, but rather than relaxing and enjoying his multi-million-pound fortune he went on to become a household name presenting the BBC’s Saturday Kitchen for ten years after cutting his teeth on Ready Steady Cook and The Big Breakfast.

He landed the Saturday Kitchen job on the back of his appearance on Strictly Come Dancing in 2005, when he finished fourth with his partner Camilla Dallerup. She became his girlfriend for a while, as he’d just ended a four-and-a-half-year relationship with Bond producer Barbara Broccoli. Back then he was a pin-up chef, posing on kitchen tables and looking seductive with his long dark locks and sultry smile.

But a turning point came six months before he left Saturday Kitchen, when a friend had a heart attack and died in front of him at a Dubai food awards show. He realised then that he had to slow down.

‘So I called Carla-Maria Lawson, who’s now BBC Head of Daytime, and she said, “This is the phone call I’ve been dreading. What can I do?” And I said, “Nothing.”’

Sarah Harding lit up the room

James’s refuge is the privacy of his own home, which he shares with his dogs Ralph and Cooper, and that feeling of relief when he closes the big gates at the bottom of the drive. ‘I love my home. I can’t believe how lucky I am. I used to be on the road all the time, but now my home is my haven.’ 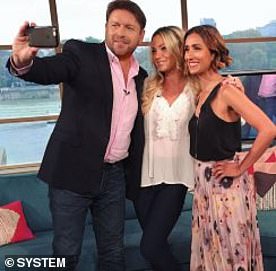 It’s not always a quiet haven though, as he has his boys’ chill-out room, a sort of green room where he entertains his TV guests before and after the show.

‘The most fun I’ve had was with Sarah Harding from Girls Aloud – we had a party to end all parties 18 months ago. I’ve never drunk so much Cristal Champagne – I’ve only just replaced it,’ he laughs.

‘She was poorly but she still brought light into every room. We spoke often right up to just before she died – I’d send her videos on how to cook stuff. You do all you can to keep people smiling and comfortable.’

That’s because James doesn’t do bargaining. He does what he feels is right. Which is just as well, since he then faced his own health crisis which he has described as ‘turbulent carnage’, although he’s refused to go into detail about it. He’s in rude health today. He’s 6ft 3in and says he’s lost weight recently.

‘I’ve lost 2st in five weeks due to the stress of opening and shutting restaurants four times because of Covid. You do have sleepless nights as you worry about your team. I’m not great at everything, or anything to be honest. But Alan Sugar says it’s all about the team around you, like a good jigsaw puzzle, and I’ve got good people in that jigsaw.’

He’s been with his partner Louise Davies, who works in TV as a PA, since 2011 after they met on the set of Celebrity Who Wants To Be A Millionaire?. He doesn’t have children but is clearly paternal with his kitchen team and would make a good dad.

‘People have said that. But I was too busy. I love my job, it’s the best in the world. But I still think, “What’s next?” Now I’m about to start the biggest project I’ve ever done. We’ve bought a business in lockdown and we’re going to turn it around,’ he reveals.

He won’t say any more on that, but he does talk about how he’s also developed his blended wine. He’s sold 200,000 bottles already in Europe before it wings its way to the UK soon. And he’s sold more than 60,000 tickets for his James Martin Live cookery tour of 18 UK towns and cities next year.

It’s a blessing that Saturday Morning With James Martin, the ITV cookery show he’s been hosting since 2017, is filmed at his home which allows him to return quickly to the stoves at his restaurants, The Kitchen at Chewton Glen in Hampshire and James Martin Manchester.

‘I don’t have to get up early for a rehearsal because we don’t do them. Even if it’s the first time for a dish, we don’t rehearse and we buy the ingredients for that demo only.’

James puts his force of nature down to being dyslexic, which has been a driving influence. ‘A lot about this is making up for the fact I’m dyslexic. I see dyslexia as a positive. I’ve never read a book – I’ve never read this book,’ he says, looking at a copy of Butter on the desk. ‘The last book I read was Chicken Licken – I’ve got the Ladybird book in my chill-out room at home. I don’t feel proud of it but dyslexia focuses your mind on something different.’

At 12 he was almost thrown out of school cookery classes because he served up flambéed chicken livers instead of fairy cakes like the rest of the class. He could cook better than his teacher, but because he couldn’t write the recipes down he failed.

Undeterred, he went to study catering at Scarborough Technical College, where he won student of the year three times and was offered a job by Antony Worrall Thompson, a judge for his final exams, at London’s One Ninety Queen’s Gate.

He’s never looked back, except to feel grateful for his down-to-earth childhood on a Yorkshire pig farm, watching his grandparents grow veg and his mother and aunt cook. He’s used some of the proceeds from his 20 best-selling cookbooks to buy 40 classic cars, but the highlight of his career was buying his mum a home.

‘Buying your mum’s house makes you feel better than anything in your life,’ he smiles. ‘Now, of course, she needs a new conservatory and a new car…’