James Middleton’s bride Alizée Thevenet has revealed she wore her mother-in-law Carole’s wedding dress for their big day in France.

Speaking to Hello!, the financial analyst, 32, said she borrowed the gown, which was donned by James’ and the Duchess of Cambridge’s mother in 1980 during her nuptials to Michael, after falling ‘in love with it’ when she tried it on in lockdown.

‘It fitted me perfectly and was exactly what I wanted. It always troubled me that wedding dresses are worn once and so it was amazing to give such a beautiful dress a second lease of life,’ she said.

The couple got engaged in September 2019 but had to delay the ceremony twice in the last year due to Covid, before finally announcing they had tied the knot in Bormes-les-Mimosas in Provence on September 11.

In a photograph posted by the Mayor of Bormes-les-Mimosas online last week, Alizée could be seen wearing the floor length off-the shoulder gown, while James, 34, beamed at the camera while wearing a full white Ralph Lauren suit and blue shirt.

The couple appeared over-the-moon as they posed with the mayor in the snaps, which appear to have been taken moments after they said their vows.

The newlyweds were later joined by 50 guests including the Duke and Duchess of Cambridge and their three children at the Chateau Léoube, an exclusive vineyard in the village that produces some of France’s finest rose wine. 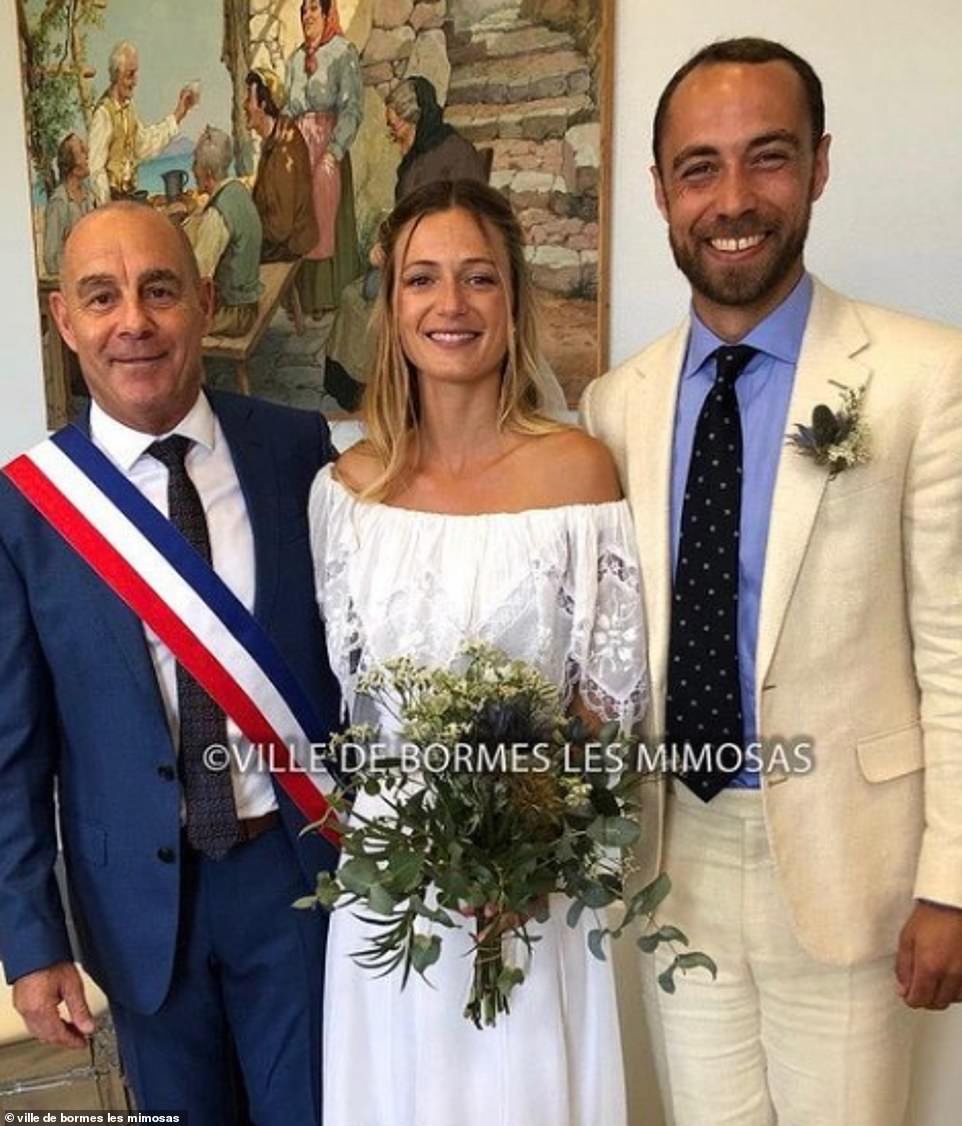 Revealing the history of her wedding dress, the bride, who stayed with James and his parents during the lockdowns in Bucklebury, Berkshire, said: ‘My something borrowed was in fact my dress from my mother-in-law Carole, who last wore it on her wedding day in June 1980.

‘While talking about dresses with Carole and sharing ideas during lockdown for inspiration, I tried on her wedding dress and fell in love with it.’

Alizée swept her hair into a half-up do for the event, with two tendrils down each side of her face.

Meanwhile she kept her makeup look natural for the occasion, opting for a nude lipstick and a touch of highlighter across her cheeks.

Her off-the-shoulder gown featured pretty lace detailing across the bodice, and appeared to be floor length.

The radiant bride she could be seen holding a bouquet of white flowers, thistles and greenery. 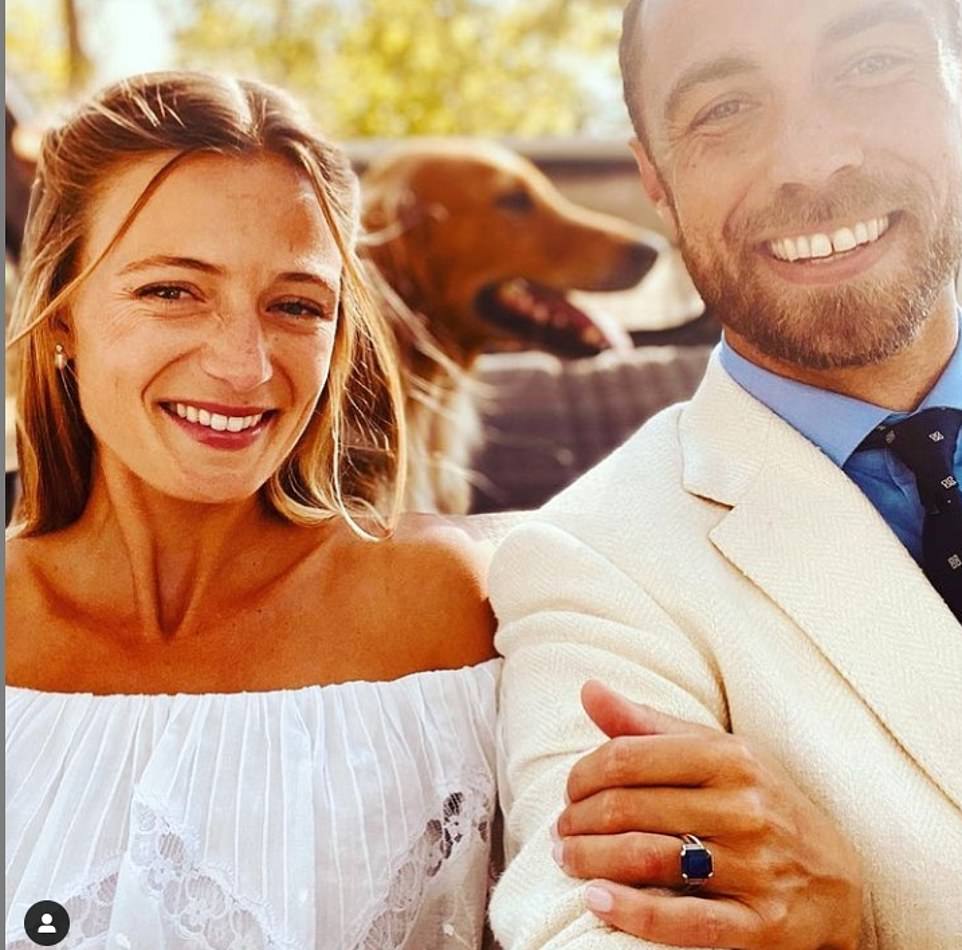 Announcing his marriage with a picture of him and bride Alizée on Instagram on Sunday evening, James said: ‘Words cannot describe how happy I am’

James looked every piece the proud groom, donning a white linen suit for the laid back event.

Announcing his marriage with a picture of him and bride Alizée on Instagram on Sunday evening, James said: ‘Words cannot describe how happy I am.’

MailOnline earlier this week revealed the couple had wed at the exclusive chateau.

A source in the village told MailOnline: ‘The wedding party was held at a Chateau Léoube. It is one of the most exclusive vineyards in the area.

‘Chateau Léoube makes exceptionally good wine, particularly the rose, which is known throughout France and overseas.

‘So it was only natural that the guests were served with Chateau Léoube wine, which they drank when they toasted James and Alizée. Many bottles of wine were drunk. Everyone had a good time.’ 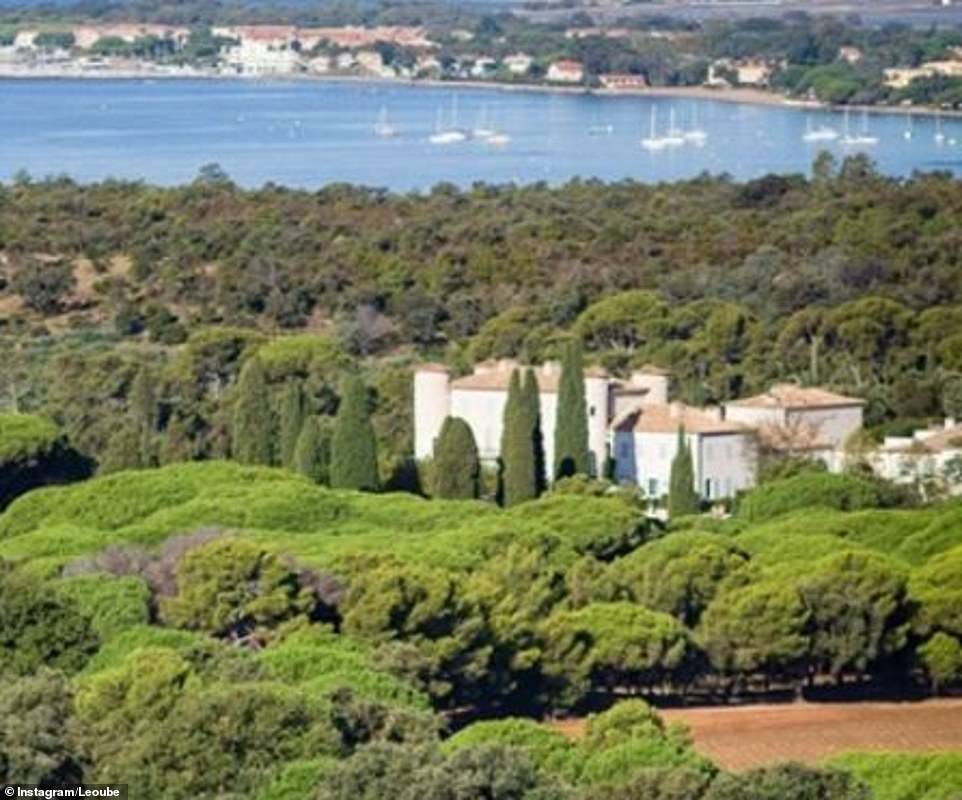 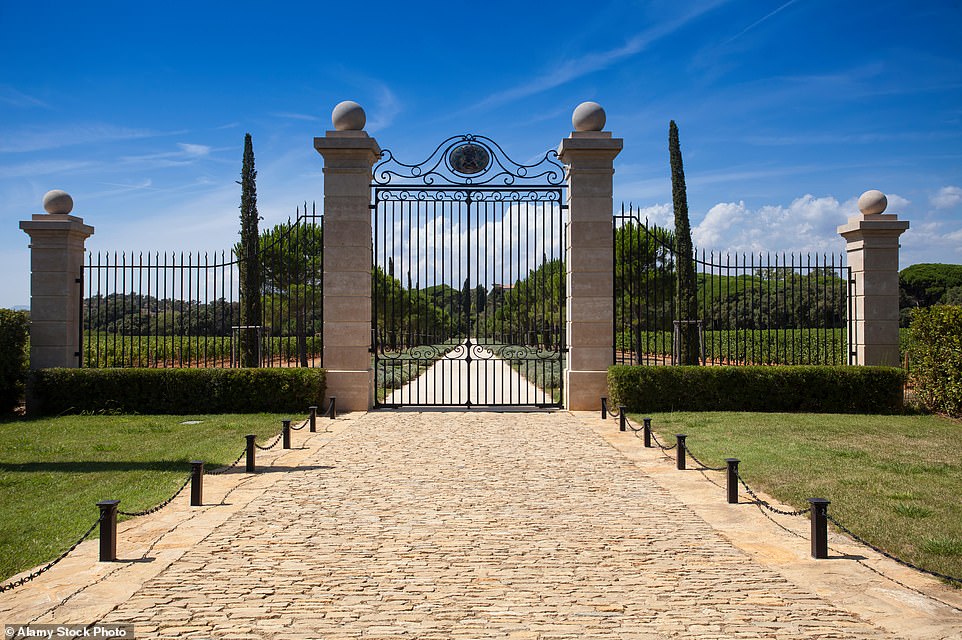 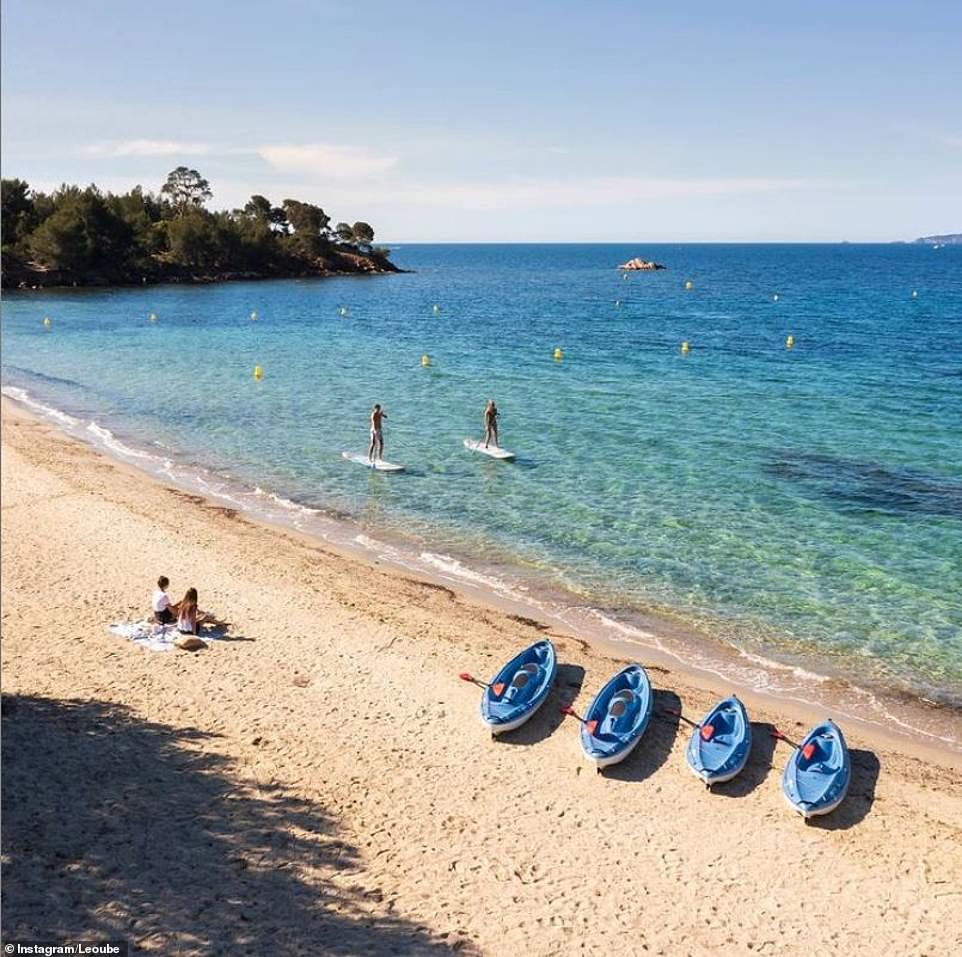 The newlyweds and many of their guests are understood to have stayed the night at Chateau Léoube. Earlier the couple had been married by the mayor at the town hall

The newlyweds and many of their guests are understood to have stayed the night at Chateau Léoube.

Carole is quoted on the vineyard’s website about how the couple fell in love with the place when they set eyes upon it in 1997.

She says: ‘Anthony and I had been looking for a house in Provence for a while when we eventually found Léoube, our sleeping beauty.

‘Set back from a quiet bay on the coastline, the house had been owned by the same family for years but hadn’t really been touched – we fell in love with it.’

She said that the previous owners had been producing rosé wine at Léoube in small quantities and we wanted to honour this tradition and continue to work with the unique terroir and setting of this historic château. 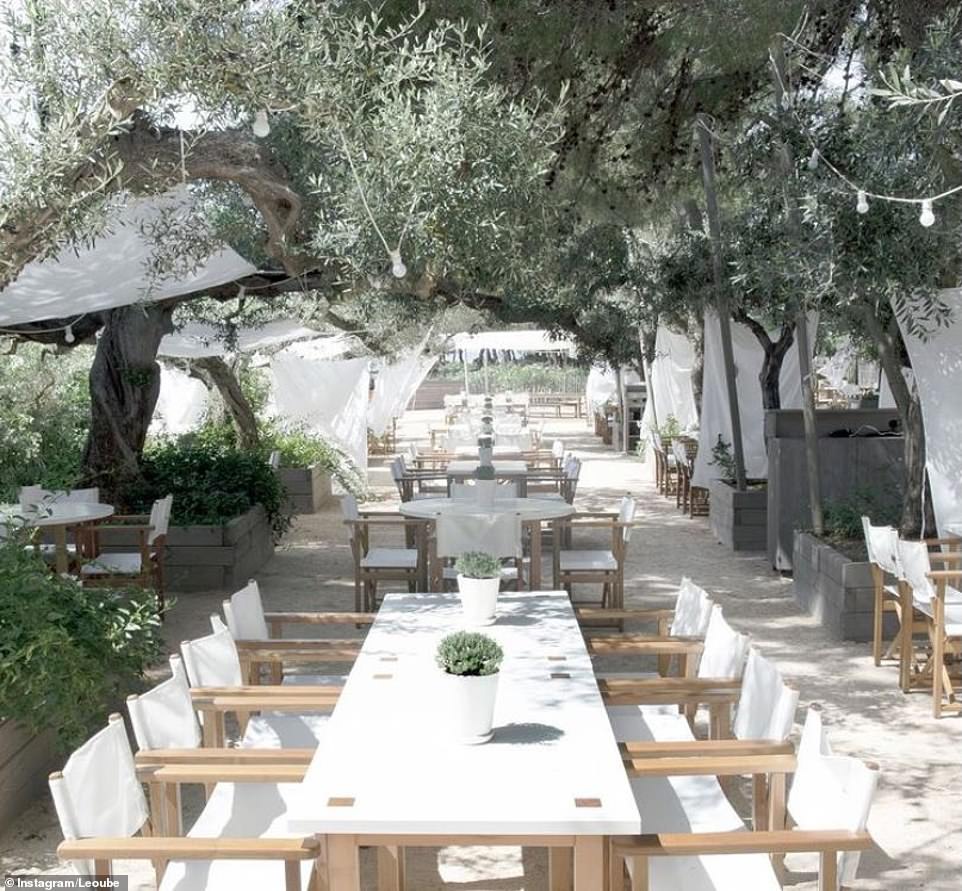 Chateau Léoube is owned by British billionaire JCB chairman Anthony Bamford and his wife Carole. Carole is quoted on the vineyard’s website about how the couple fell in love with the place when they set eyes upon it in 1997

‘But we also hoped to build on their foundation and push the winemaking at Léoube in order to create wines of exceptional quality that could be shared more widely. Having turned our own family farm over to organic principles in the UK, we wanted to bring the same sustainable, natural approach to Léoube, working with the rhythm of the seasons to preserve and protect the land and to produce wines in harmony with nature’s cycles.

‘As founders of an organic farm, what was most attractive and fascinating to us at Léoube is its soil. Provence is home to some of the oldest vineyards in France and the soil there dates back over 800 million years.

‘The seabeds once sat on the estate’s land, which saturated the soil with an array of minerals. Much of Léoube’s distinct flavours come from its soil and the gentle hint of the sea that infuses the vines on this land. 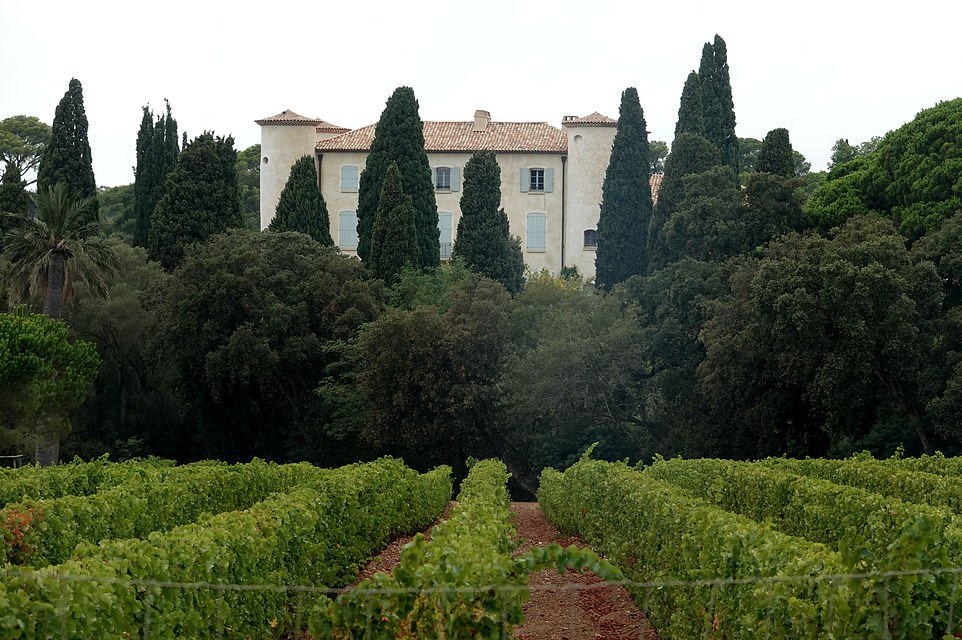 Prince George , Princess Charlotte and Prince Louis were with their parents Kate and Prince William to watch their uncle James wed Alizée Thevenet in the village of Bormes-les-Mimosas on Saturday 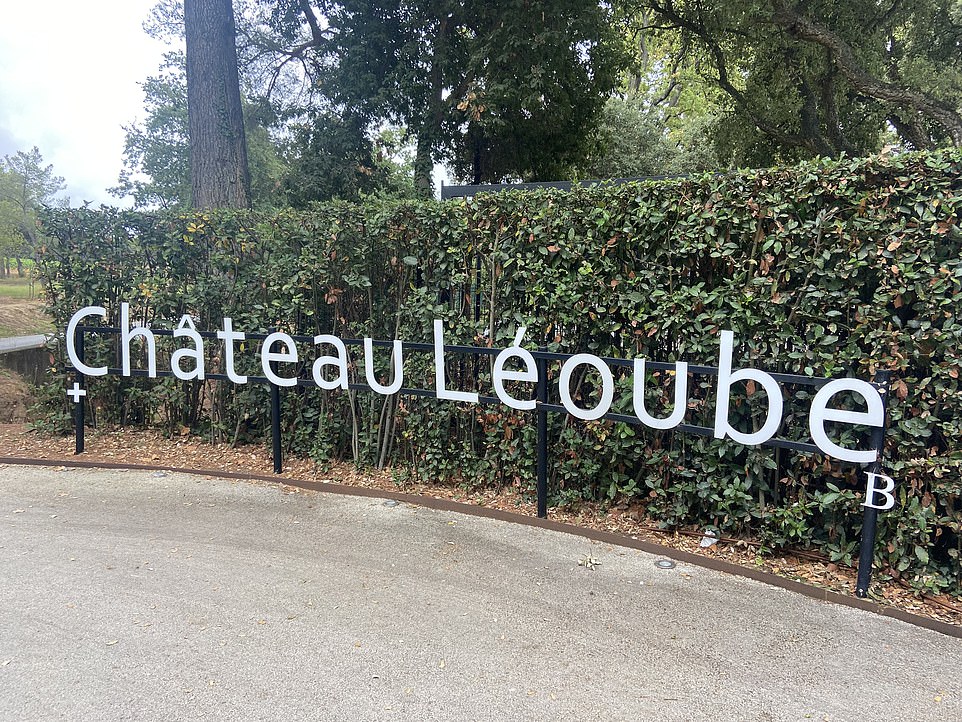 Mr Middleton and Miss Thevenet, a trilingual French financial analyst, also in her 30s, met in 2018 when his cocker spaniel, Ella, approached her at a private members’ club in London

‘We arrived at Léoube in 1997 and began the process of converting the vineyard and olive grove to become organic. When we bought the estate, we asked our neighbour, Jean-Jacques Ott, to help guide us through the conversion process. 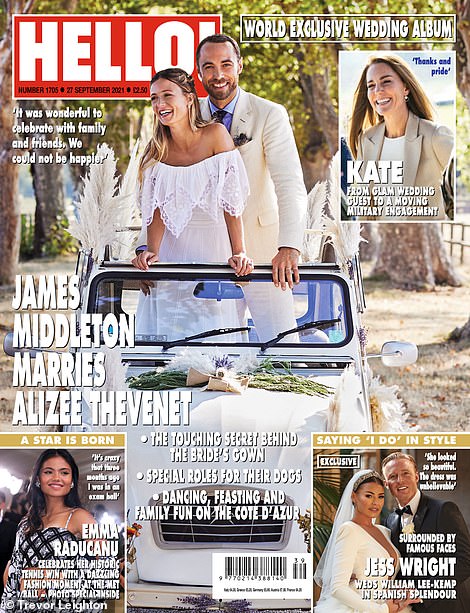 James and his new wife Alizée appear in the latest addition of Hello! magazine (pictured)

‘Later his son Romain came to work for us – we call him little Ott. Romain brings a unique sensibility to the winemaking at Léoube, blending traditional techniques with new technology to create elegant, balanced wines that reflect his expertise and mastery of his craft.

‘His skill is matched by his passion and it’s been a real honour to work with him to develop our range. We’re very proud of the fact that all our wines, particularly the rosés, are consistently recognised as striking and excellent examples of their terroir. Léoube is now sold in over 30 countries around the world and there is so much more we would like to do to bring this beautiful terroir to people’s homes.’

The Duke and Duchess took their children to the Cote d’Azur to see James marry his French fiancée at their secret wedding over the weekend.

Prince George, Princess Charlotte and Prince Louis were with their parents Kate and Prince William to watch their uncle James wed Alizée in the village of Bormes-les-Mimosas on Saturday.

But the future king and queen, and their royal children, weren’t the guests of honour – the couple’s dogs were – with golden retriever Mabel even photobombing the wedding pictures.

James wrote on Instagram: ‘Yesterday I married the love of my life surrounded by family, friends and of course a few dogs.’ 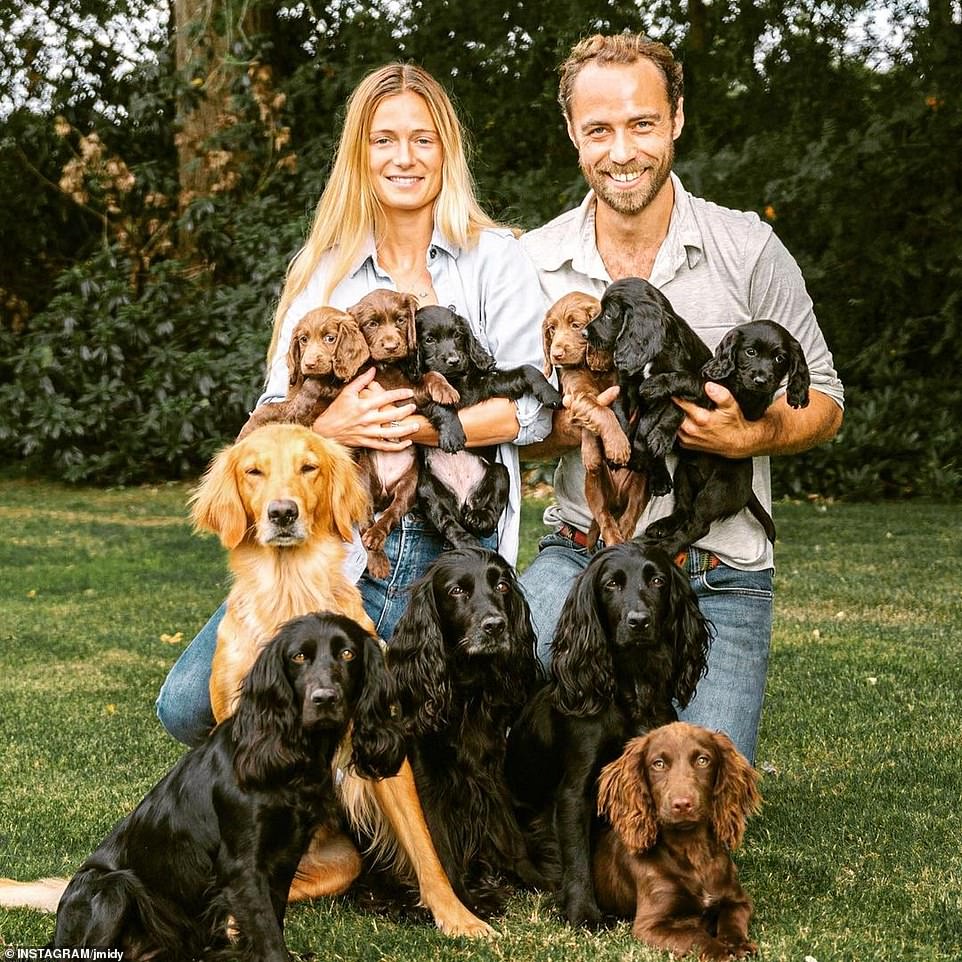 Earlier this year it was revealed that James and Alizée had snapped up the Middleton’s fourth property in the Berkshire village of Bucklebury, for £1.45 million 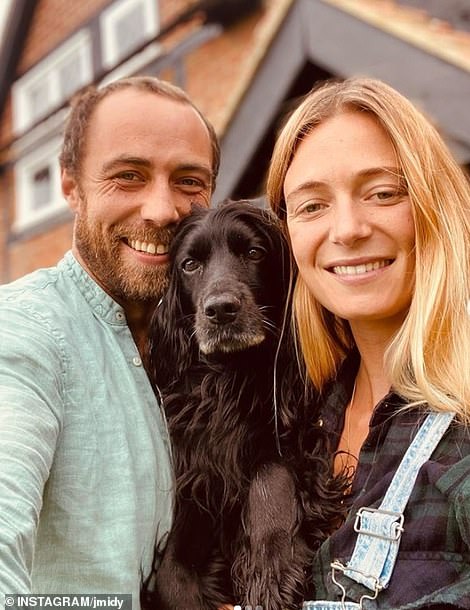 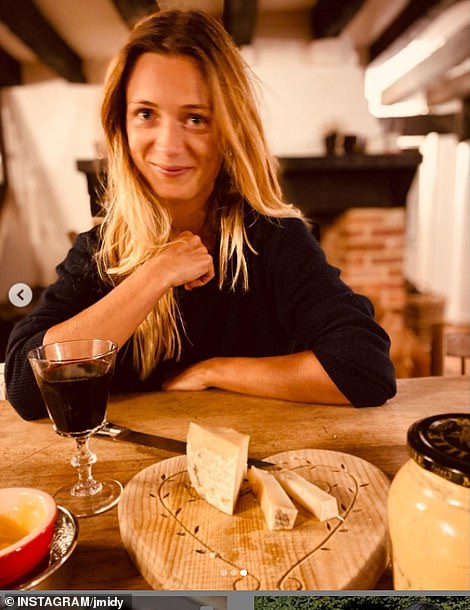 Kate Middleton’s brother James last month revealed a glimpse of his new £1.45 million mansion after announcing he and his French fiancée Alizée Thevenet had bought their first home together

Mr Middleton and Miss Thevenet, a trilingual French financial analyst, also in her 30s, met in 2018 when his cocker spaniel, Ella, approached her at a private members’ club in London.

The couple, who announced their engagement in 2019, had originally planned to get married in May last year.

But they were twice forced to push back the date. He said in a post on Instagram in September last year: ‘It’s a year since I asked Alizée to marry me… what a year it’s been!

‘Two homes, lockdown, two attempts at a wedding, a litter of [dog emoji], launching of new company @ella.co, a beard shave and much more but the best part is that I get to share it with you @alizeethevenet and I can’t wait to take on whatever the future holds for us.’ 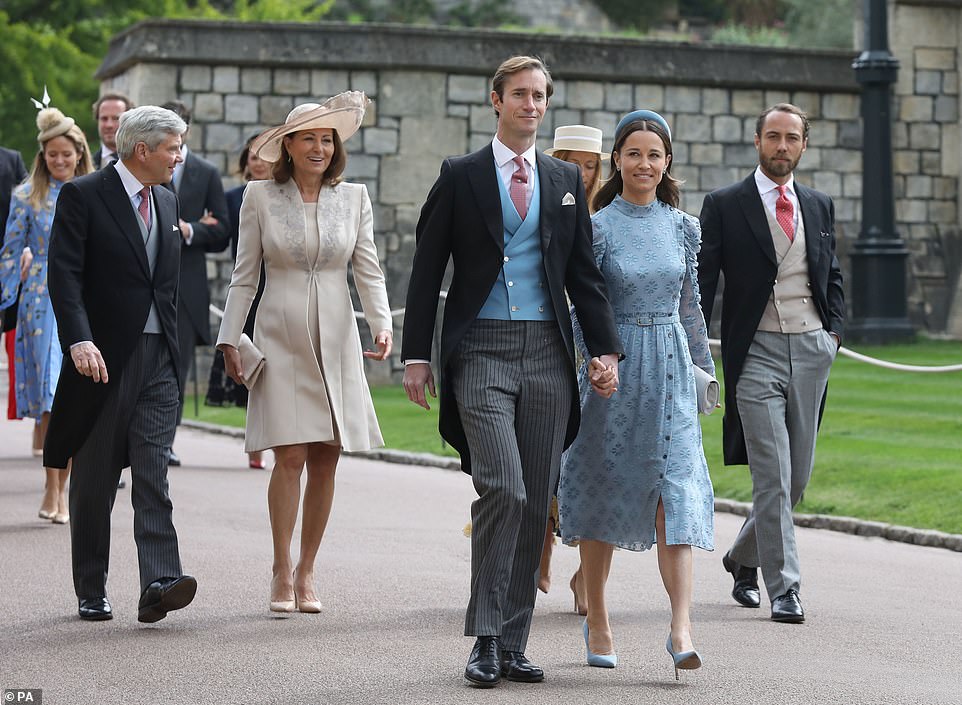 James (pictured right alongside Pippa and husband James Matthews in 2019) is the youngest of the three Middleton siblings, after his eldest sister, Kate, 39, and Pippa, 38. He was watched by millions around the world as he delivered a reading from the Bible at Kate and Prince William’s 2011 wedding.

France is on the UK’s amber list so Kate and William, who are vaccinated, must get tested on or before the second day after returning. George and Charlotte also face a PCR test – but Louis, who is under 5, is exempt.

The five Cambridges attended the event, along with James’ other sister, socialite Pippa, and her businessman husband James Matthews.

Their parents Carole and Michael Middleton, and James beloved dogs, Luna and Mabel, are also thought to have watched them walk down the aisle.