James Rodriguez ready to leave Everton after Carlo Ancelotti’s shock exit, with Atletico Madrid, Napoli and AC Milan all approached to rescue midfielder after just one season at Goodison Park

Everton midfielder James Rodriguez is being offered to clubs across Europe following the departure of Carlo Ancelotti.

The Colombia international joined Everton from Real Madrid last season and showed flashes of brilliance but had a largely disappointing season with a series of niggling injuries cited for keeping him on the sidelines.

The 29-year old has a good relationship with Ancelotti but the prospect of linking up with his former coach at Real Madrid again are slim.

That hasn’t stopped his representatives asking the question, though, with it apparent that the playmaker is ready to leave Goodison.

Everton have financial fair play concerns so losing James’s huge wage plus gaining a transfer fee would be something they have to consider, especially taking into account the player’s absence for large chunks of the last campaign.

He has also been offered to Atletico Madrid, Napoli and AC Milan as his agent Jorge Mendes looks for a solution. 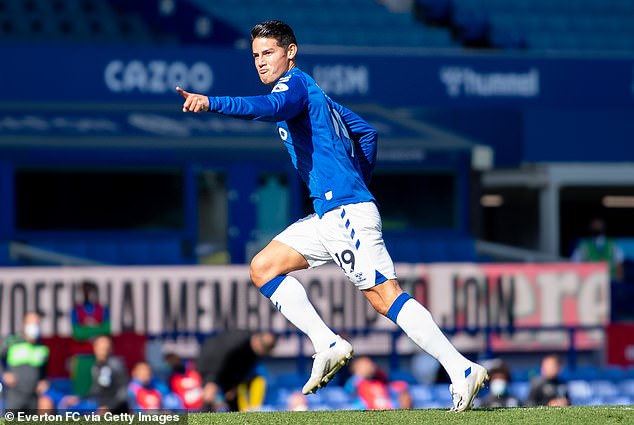 Milan have also held further talks with Chelsea for Olivier Giroud and asked about winger Hakim Ziyech and midfielder Tiemoue Bakayoko, who has been on loan previously with the Italian club.

Sportsmail reported earlier this week that Rafa Benitez is closing in on the role, a move that appears unpopular with the Everton fanbase due to his ties to rivals and neighbours Liverpool.