BREAKING NEWS: Footy superstar James Tedesco is fined for ‘drunken behaviour’ over a night out where he allegedly shouted ‘Squid Game’ at a woman with an Asian background

NRL star James Tedesco has been fined $10,000 over a night out where he was accused of yelling ‘Squid Games’ at a woman of Vietnamese descent.

That sparked an NRL Integrity Unit investigation, which didn’t prove any allegations of racist behaviour. He was instead fined for drunken behaviour.

Ms Trinh previously said she was waiting with a friend for a lift home when she was approached by Tedesco and a group of friends.

‘It was a group of about ten footy boys, and I was pretty intimidated,’ she told Sydney Morning Herald.

‘A 20-year-old tiny girl, waiting for a lift home and you have a bunch of guys come up to you and laugh at you for being Asian.’

The NRL Integrity Unit could not substantiate an allegation Roosters captain James Tedesco made a racist remark, but fined him for drunken behaviour (pictured, Tedesco with partner Maria Glinellis) 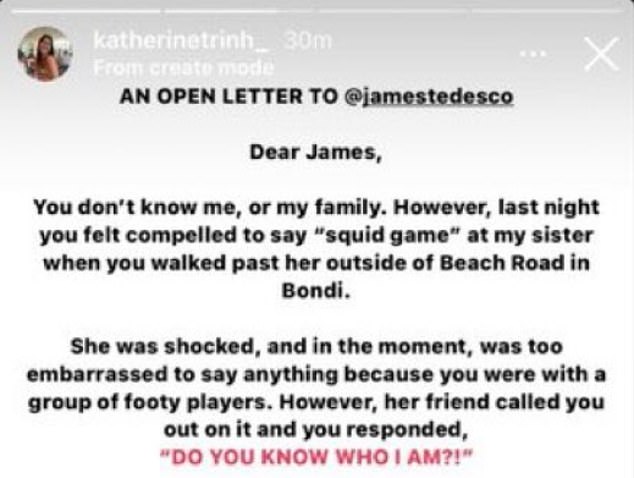 Ms Trinh later told her family when her outraged sister Katherine penned an open letter to the NRL skipper and posted it to her Instagram.

‘You don’t know me, or my family. However, last night you felt compelled to say “squid game” at my sister when you walked past her outside of Beach Road in Bondi,’ Katherine claimed.

‘She was shocked, and in the moment, was too embarrassed to say anything because you were with a group of footy players. However, her friend called you out on it and you responded, “Do you know who I am?”‘

Ms Trinh’s sister called Tedesco entitled and said he needed to be held accountable for his actions.

‘A quick Google, shows you are quite the footy player, and even represented our home state! No doubt, you are a role model to many. As such, you need to be held accountable for your words and actions.’ 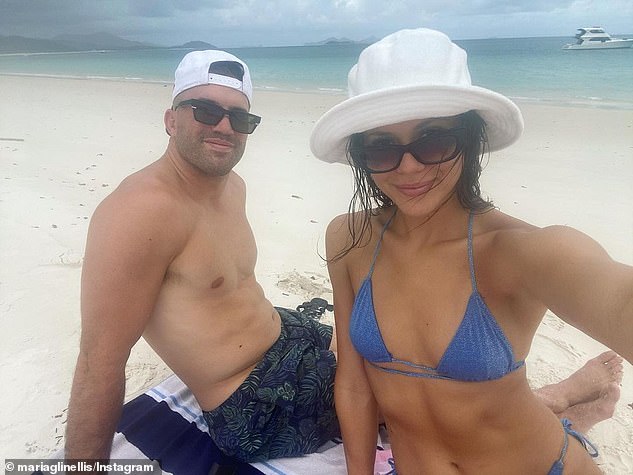 The social media post prompted The Roosters to launch an investigation into the matter.

The club has defended its star player and claimed that Tedesco had been discussing the hit Korean television show with friends within earshot of Ms Trinh.

‘After we found out about the Instagram post we thoroughly investigated the matter,’ Roosters chief executive Joe Kelly said.

‘There was absolutely no interaction between James Tedesco with this group of people. We categorically deny that anything untoward occurred.’

The NRL has revealed it will be launching its own investigation into the matter.