‘My plan is to play with Neal’: Jamie Murray has no intention of partnering with brother Andy at Olympics as he prefers to stick with partner Skupski

Jamie Murray has admitted that he has no plans to partner his brother Andy in the Olympics this year, preferring to stay with regular partner Neal Skupski.

The decision has been based more on him not wanting to disrupt his blossoming partnership than sentimental concerns for his sibling, whose future is uncertain again as he tries to shrug off a pelvic injury.

After he and Skupski made the second round of the Australian Open, Jamie explained his thinking.

‘My plan just now is to play with Neal,’ said Jamie. ‘ Whether Andy is fit or not is a different story. It depends, I guess, on rankings and things like that. We just have to see closer to the time who’s qualified as well.

‘For us right now, we’ve played a lot of matches, we’ve played against a lot of good teams, we’re going to be playing this year. It makes sense for us to do that but if Andy’s fit and healthy, he’ll obviously have a say in what the teams are going to be. Which is fair enough.

‘Joe (Salisbury) is there, Andy if he’s fit would want to play – I guess for the LTA it’s to decide who the best two teams are to enter into the competition. 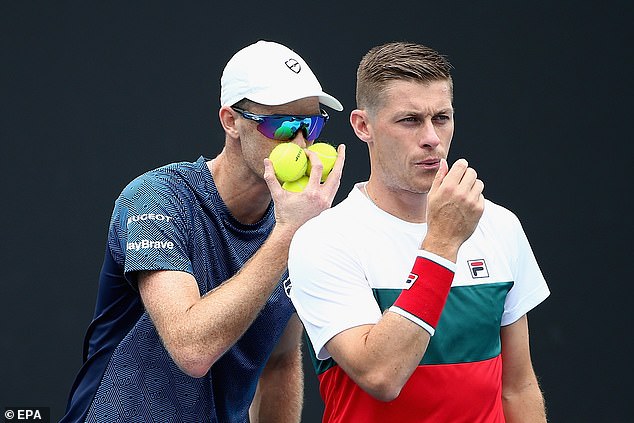 ‘And truthfully, it’s not something I’ve spent masses of time thinking about because at the end of the day, it’s one tournament. And my focus this year was trying to do the best we can with Neal and keep trying to build on our partnership and be the best team.

‘Olympics is not going to change that, whether I play with Neal or someone else. Our goal is to finish as high up the rankings as we can.’

While the Murray brothers have played well in the Davis Cup together their three Olympic outings have been less successful. They lost in the first round at London and Rio de Janeiro and only made the second round in Beijing.

Andy is currently trying to shake off a pelvic bruising problem, having played only one match since October 20.