Jamie Oliver is campaigning for the sale of ‘addictive’ energy drinks to children to be banned.

The father-of-five, who is married to the model Jools, claims teachers across the country are forced to change their lesson plans every day as youngsters are unable to concentrate while suffering the ‘highs’ of energy drink consumption.

Jamie, who successfully campaigned for healthier school dinners and a sugar tax, believes this is affecting other students, which impacts the grades and future career prospects of the younger generation.

He is urging people to tweet Health Secretary Jeremy Hunt supporting a ban with the hashtag #notforchildren.

Energy drinks, which have previously been linked to headaches, abdominal pain and insomnia, can contain around 160mg of caffeine, despite 105mg being the safe daily limit for 11 year olds.

Professor Steven Lipshultz, pediatric cardiologist at the Children’s Hospital of Michigan in Detroit previously said a 10-year-old could get caffeine poisoning after consuming 80mg of caffeine, while a 12-year-old may suffer symptoms, including hallucinations and convulsions, after 100mg.

Sales of the energy drinks, such as Red Bull and Monster, in the UK increased by 185 per cent between 2006 and 2015, making the market worth more than £2 billion. 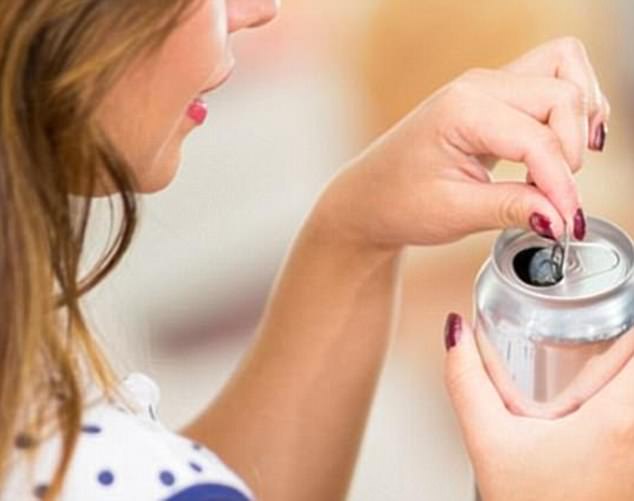 Energy drinks have previously been linked to headaches, abdominal pain and insomnia (stock)

Children as young as 12 are guzzling energy drinks to help them stay up late and play video games, experts warned in October last year.

Young people are attracted to such drinks due to their promises of enhanced energy, as well as their low cost and ready availability, a study reveals.

Most energy-drink consumers are unaware of the products’ main ingredients, health implications or appropriate serving sizes, the current study adds.

Study author Dr Jacinta Francis from the Telethon Kids Institute in Perth, said: ‘Drinking energy drinks to stay alert while playing video games was a common theme that emerged through all of the age groups.

‘I think for the young gamers it would be wise to ban energy drinks.’

‘These drinks are turning our kids into addicts’

Referencing a school in Norwood, South East London, Jamie told the Mirror: ‘If you’re still in any doubt about a ban you just have to look at a ­generation of underpaid, underloved teachers who’re sitting there with a plan A, B and C for a lesson – and if two or three kids turn up having had an energy drink, then it’s straight to plan B – to know this is wrong.

‘These drinks are turning our kids into addicts. Their use is, in my mind, akin to drugs.’

Jamie, who believes 25 per cent of energy drink consumers are children, adds many are in a viscous circle where they rely on energy drinks to give them the boost they need to get up in the morning, then experience a ‘low’ when the effects of their sugar and caffeine wear off, so have another in the afternoon before finishing a day with a final can of the beverage.

This yo-yo of highs and lows makes youngsters feel lethargic the next morning, prompting them to reach for another energy drink and the cycle begins again, he said.

The celebrity chef, who explores energy drinks’ effects in Friday Night Feast at 8pm tonight on Channel 4, believes their manufacturers are deliberately targeting children by using vibrant colours and images on their packaging, even if they claim not to.

Last month, scientists revealed for the first time why up to one-in-three 10-year-olds consume energy drinks, which are sold for as little as 25p a can.

Peer pressure is a key driver behind young people’s consumption of such beverages with one 10-to-11 year old girl commenting, ‘say your friend has an energy drink…you’re tempted to get that because it looks cooler and what your friends have you want.’

Parents even coerce their children into having energy drinks in exchange for good behaviour with one boy saying: ‘Sometimes [dad] says to me, “Go down the shop and get us some washing-up liquid. There’s a can of Red Bull in there with your name on it.”‘

Study author Dr Amelia Lake, previously at Newcastle University, told MailOnline: ‘We want a call on manufacturers to be more responsible with clearer labelling and restrictions on marketing.’

Yesterday, Waitrose voluntarily banned the sales of energy drinks to children. The teachers’ union NASUWT has called for a broad ban to youngsters.