Crowning his interview with a celebratory jig, Jamie Oliver wasted no time addressing the media in the wake of today’s sugar tax budget revelation.

But such was his keenness, offering to speak outside Westminster shortly after George Osborne’s Budget announcement, that some questioned whether the healthy eating campaigner may have had a tip-off about what the Chancellor had to say.

One Twitter user wrote: ‘So did Jamie Oliver just happen to be in Westminster and available for interviews this afternoon? Or did he have advance knowledge?’ 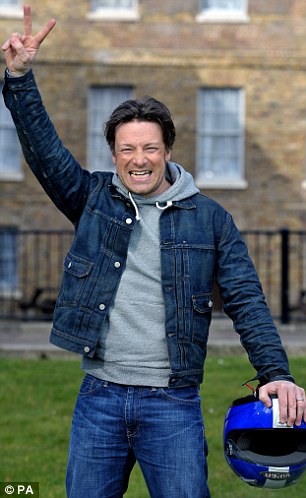 Victory! Crowning his interview with a celebratory jig, Jamie Oliver wasted no time in addressing the British media in the wake of today’s sugar tax budget revelation

Gemma Simpkins asked: ‘Just happened to be walking past parliament for an interview at just the right time did he?’.

But despite the scepticism, the celebrity chef later insisted that he heard of the levy at the same time as everyone else.

He stressed that it was pure coincidence he happened to be in Westminster just as the tax – which he has campaigned for for months – was announced by the Chancellor.

‘I didn’t find out until today that this was going to be in the Budget,’ he said. ‘And more than that I didn’t think we would ever get it. I never thought we were going to get this.’

But such was his keenness, offering to speak outside Westminster shortly after the Budget announcement, that some questioned whether the healthy eating campaigner may have had advanced notice of the sugar tax

Earlier in the day the avid campaigner expressed joy at the surprise move, taking to Instagram and Twitter within minutes of Mr Osborne declaring a tax.

‘We did it guys!! we did it!!! A sugar levy on sugary sweetened drinks …… A profound move that will ripple around the world ….business can not come between our Kids health !!,’ he posted on Instagram.

Drinks with more than 5g of sugar per 100ml will be taxed at a lower rate of 6p per drink. These include:

Drinks with more than 8g of sugar per 100ml will be taxed at a higher rate of 8p per drink. These include:

Around 90 minutes later he was interviewed on BBC News, ending it by jumping up and down and waving his arms in the air in celebration – apparently unaware he was still on camera.

The tax – which will be brought in in two years’ time to give manufacturers time to drive down the sugar content of their drinks – is expected to raise £520 million.

It could hit drinks such as Coca-Cola, Pepsi, Red Bull and Fever Tree tonic water.

This money raised will be used to double the amount of funding for sport in every primary school, with secondary schools encouraged to offer more sport as part of longer school days.

The rates of tax have not yet been set, but the Office for Budget Responsibility has estimated it could add 18p to 24p to the price of a litre of fizzy drink if the full cost is passed on to the consumer.

Shares in listed drinks firms dropped sharply on the London stock market after the announcement.

Jamie Oliver, a vigorous campaigner for a sugar tax, said the Chancellor’s announcement that he will tax the soft drinks industry was ‘amazing news’ adding it would ‘ripple around the world’.

Similar taxes have been used to reduce consumption and childhood obesity in countries including Mexico and Hungary. Mr Osborne told MPs that obesity costs the economy £27billion a year.

But he said afterwards that any drink with added sugar, including milkshakes, should have been included. 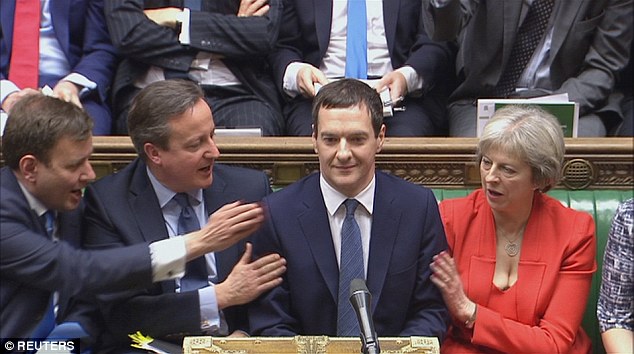 Welcomed: Jamie Oliver, a vigorous campaigner for a sugar tax, said the Chancellor’s announcement that he will tax the soft drinks industry was ‘amazing news’ adding it would ‘ripple around the world’

The British drinks industry was furious today – and may have been unaware the announcement was coming.

Some also argued that the decision could cost jobs.

British Soft Drinks Association director general Gavin Partington said: ‘We are extremely disappointed by the Government’s decision to hit the only category in the food and drink sector which has consistently reduced sugar intake in recent years – down 13.6 per cent since 2012.

‘We are the only category with an ambitious plan for the years ahead – in 2015 we agreed a calorie reduction goal of 20% by 2020. By contrast, sugar and calorie intake from all other major take home food categories is increasing – which makes the targeting of soft drinks simply absurd.’

Q&A: HOW SUGAR TAX WILL WORK AND WHAT WILL BE MORE EXPENSIVE

When will it come into force?

From April 2018 soft drinks companies will pay a levy on drinks with added sugar.

Why are the Government introducing this tax?

The move aims to help tackle childhood obesity. Sugar-sweetened soft drinks are now the single biggest source of dietary sugar for children and teenagers. Ministers hope the move will mean that drinks companies cut down on the amount of sugar in drinks. The measure could also move consumers towards lower sugar alternatives and reduce portion sizes, they said.

How will it work and who will pay?

What sort of drinks will be affected?

Will it apply to all drinks?

The new levy will not be paid on milk-based drinks and fruit juices.

Does this mean that sugary drinks will be more expensive?

The Office for Budget Responsibility (OBR) has estimated it could add 18-24p to the price of a litre of fizzy drink if the full cost is passed on to the consumer. But a Treasury spokesman said: ‘We are hoping that producers do not pass on to consumers the costs. They can obviously reformulate their products, which many of them have done, and Robinson’s for example has removed added sugar from most of its drinks and Tesco has pledged a 5% reduction in sugar in its ranges.

‘So they can reformulate, they can reduce portion sizes and they can promote diet products.’

How much money will this new tax raise?

Ministers hope the measure will raise £520 million in the first year. But the OBR estimates that this figure will drop as drinks companies reduce the sugar in their products and people make healthier choices.

What will happen to the money raised?

In England the money will be reinvested for sports in schools.

Is the Government the first in the world to introduce such a tax?

No – other countries have experimented with sugar taxes. Scandinavian countries have imposed similar taxes as have France and Hungary. In 2014 Mexico also introduced a sugar tax levy on soft drinks. South Africa plans to introduce a similar measure in 2017.

Has the Government looked at how these levies have worked elsewhere?

The Treasury said it has looked at the way sugar taxes have been used around the world and opted for a model similar to Hungary, where the introduction of a tax on companies has led to a 40% reduction in levels of sugar in products.