The name Hopoate has been associated with good, bad and utterly horrific headlines in rugby league and Sydney life for almost three decades.

Family patriarch John, the mercurially talented winger who made his name with the Manly Sea Eagles and later the Wests Tigers, was never far from controversy during his 13-year playing career. While he played for Australia and NSW, he was also responsible Or, indeed, after he retired.

Through it all, his faithful wife Brenda stood by him, and held the family together as the couple raised 11 children together.

While most have remained on the straight and narrow and become rising sports stars in their own right, a few have also inherited their father’s bad boy ways.

The tight-knit family are back in the headlines after the second eldest son, off-contract NRL player Jamil Hopoate, 26, was charged over his alleged involvement in a large drug importation ring in Sydney.

From straight-shooting Mormon William Hopoate, who famously delayed his NRL career go on a religious mission and then risked it all by vowing not to play Sundays – to his younger brother Albert, who was declared the ‘best of 11 kids’ but has faced adversity with two knee constructions before the age of 20.

Daily Mail Australia takes a closer look at the Hopoate clan and the wildly different life paths many of their 11 kids have taken.

Hopoate scored 87 tries on the wing in 209 NRL games between 1993 and 2005 for the Manly-Warringah Sea Eagles, Wests Tigers and the Northern Eagles.

His 13 year career included 45 weeks on the sidelines due to suspension.

He represented Australia on two occasion and played one game for NSW during the Super League war-marred State of Origin series in 1995.

Hopoate was suspended for 12 games in his most infamous incident while playing for West Tigers in 2001 where he poked several North Queensland Cowboys opponents up the backside.

His career at the level came to an abrupt end in early 2005 following a 17 match suspension for an elbow to Cronulla’s Keith Galloway.

In 2018, he was banned for playing and officiating for 10 years by NSW Rugby league after he punched and threatened opponents during a Manly competition game.

He remains ineligible to play or officiate a match for another two years, despite half of his 10 year ban suspended.

Hopoate believes he would have gone down a troubled path if it wasn’t for his wife of 29 years. 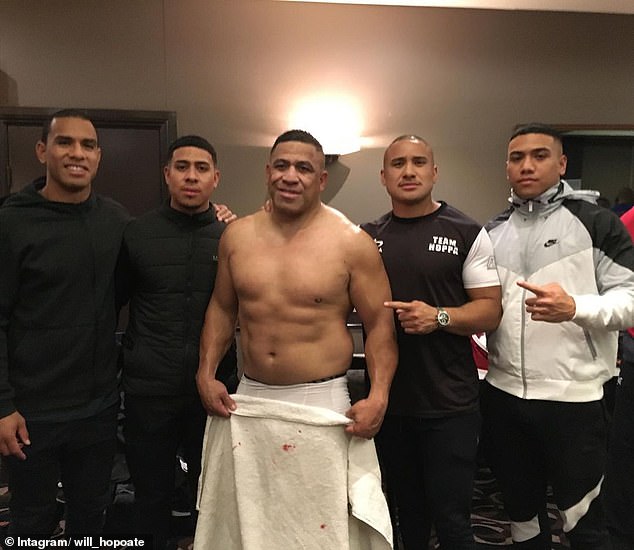 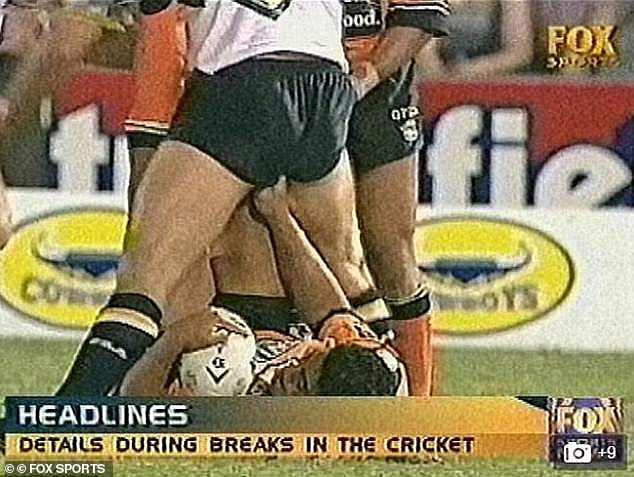 The eldest of John Hopoate’s 11 children and one of seven sons, Will burst onto the rugby league scene as a 16-year-old prodigy for Manly in 2009 in the national Toyota Cup under-20s competition.

He made his NRL debut a year later and played 22 NRL games over the next two seasons and in 2011, became the second youngest player to be selected for NSW for scored a try in his State of Origin debut.

He won a premiership with Manly month later but then famously walked away from the sport to undertake a two-year religious mission with the Mormon church.

He refused to play on Sundays during the 2016 season due to his devout Mormon faith but was forced to backtrack on his strong stance the following season.

He’s now at peace with playing football on Sundays but has not ruled out revisiting his Sabbath football ban in the future.

‘I’ve always said that in a perfect world I’d take that option to not play on Sunday,’ Hopoate said in 2019.

‘But Canterbury is my employer and there is common sense in everything you do.’

Unlike his father, the married father-of-four has remained out of trouble during his career and still plays for the Canterbury Bulldogs.

Will showed his family loyalty at Central Local Court on Wednesday when he offered to put up $50,000 worth of his property in the hope his younger brother Jamil can be released on bail. 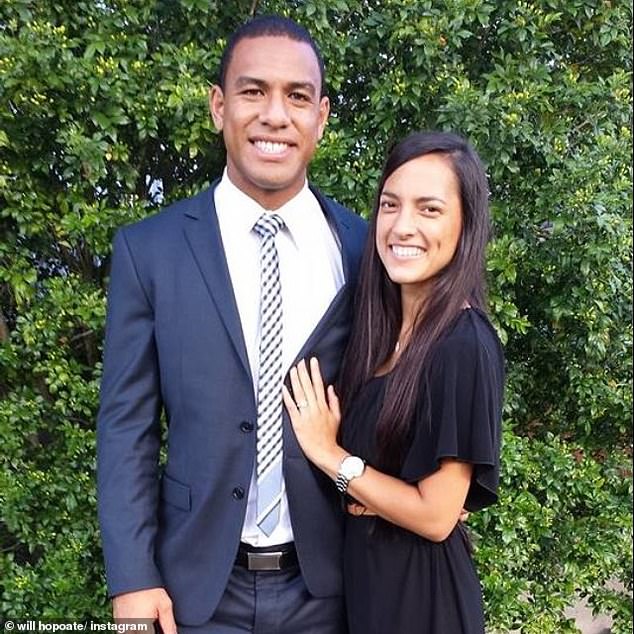 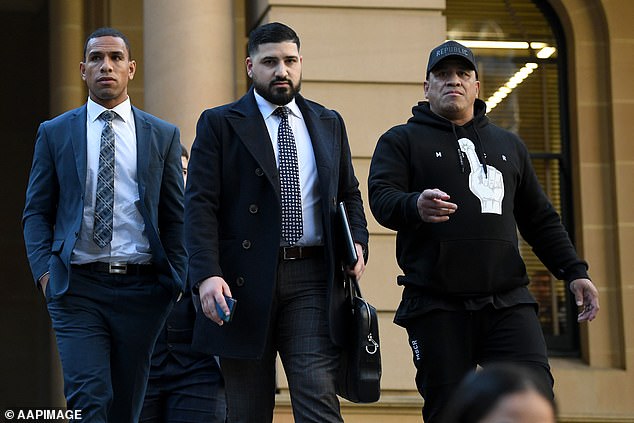 NRL star Will Hopoate (left) and his father John (right) were at Central Local Court on Wednesday to support younger brother Jamil, who has been charged with supplying half a tonne of cocaine with an estimated street value of nearly $155 million

The second eldest son, Jamil was a talented junior tipped to follow in the footsteps of his older brother Will but was sacked by Parramatta and Manly for several off-field issues including a violent assault which resulted in a year long stint behind bars.

He was given another lifeline by the Brisbane Broncos and finally made his long-awaited NRL debut at the age of 25 in the first round of the 2020 season.

Jamil played 12 NRL games in the second row before being released by the Broncos at the end of a horror season for the club.

He returned to Sydney but any hope of continuing his NRL career ended when he was charged with assaulting his girlfriend outside a Port Macquarie club on the NSW mid north coast in December.

He pleaded guilty to two charges of common assault in February over the incident.

Jamil is now accused of being part of a trio charged over the massive haul of cocaine from the UK and faces a lengthy stint behind bars over his alleged involvement.

He spent Tuesday night behind bars after he was arrested and charged with supply large commercial quantity of cocaine and using a vehicle to avoid apprehension and was due to face court late Wednesday afternoon. 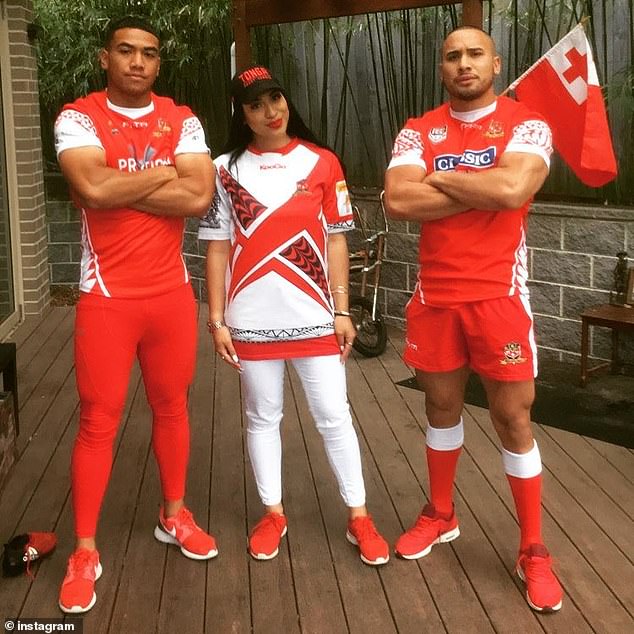 Jamil Hopoate (right) is back behind bars following his arrest on Tuesday. He’s pictured with younger brother Albert (left) and sister Maile (centre)

Maile made headlines in 2019 when she uploaded a disturbing video showing a toddler riding unrestrained in the front seat of a car.

She shared the later deleted video on her Instagram with the caption ‘Sisi it’s your life not mine’.

Another caption read: ‘Sisi out here already breaking the law’. 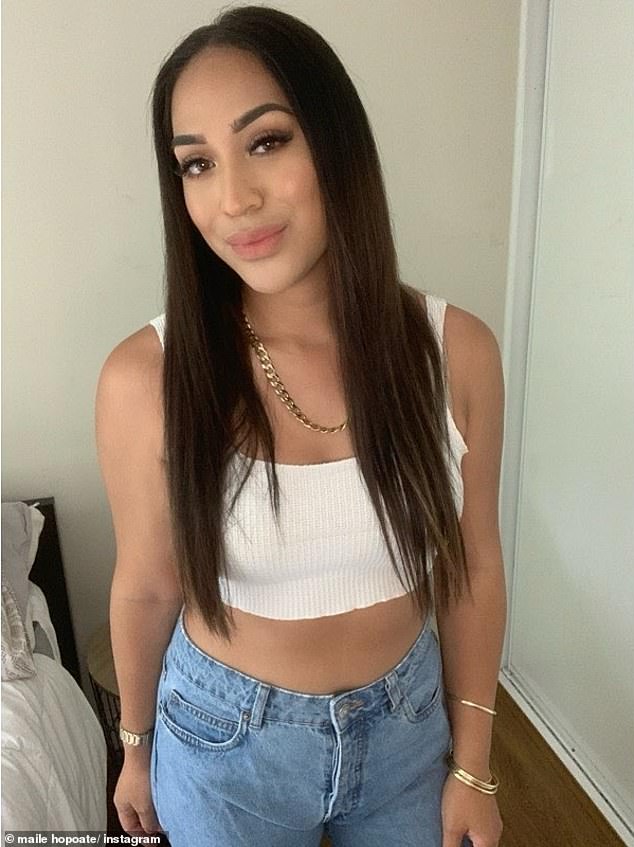 The girl was so small the diagonal section of the seat belt hovered well above her head.

In NSW it is illegal to have a child less than four years old in the front seat of a car.

No one was charged over the failure to properly secure the child.

Maile’s mother Brenda was later fined $500 for refusing to provide the name of the driver alleged to have failed to secure the toddler riding in the front seat of her car.

The court heard Ms Hopoate did not want to reveal the name of the driver to police because it would ’cause issues within the family’, the Manly Daily reported.

The court was also told she was embarrassed the video was posted on social media by daughter Maile.

Hailed by his older brothers as the most talented of the Hopoate family, Albert played rugby league and rugby union at Australian Schoolboy representative level.

He rose through the junior ranks  at Manly before his promising career disrupted by consecutive ACL injuries and required two knee reconstructions before the age of 20.

‘Injuries is part of the game but still grateful to be apart of it. I’ve been trusting the process since ’01 and there’s no stopping here. I’m just getting ready for whateva God has in store for me,’ he posted on Instagram at the time.

He was back training with Manly a year later and was briefly loaned to the New Zealand Warriors before making his NRL debut for Sea Eagles last August.

It was first time since 2003 three NRL brothers played different clubs on the same weekend.

‘He’s the best yet. I’d like to say I am, but all the family reckon he is the best one to come through,’ Jamil told the Sun Herald at the time.

‘He’s really strong, has a deadly left fend and he’s a humble kid. He deserves his debut. He tried to play with the big boys in the backyard, but he got bashed up when he was younger. That’s what has made him so good as a player now, he got used to the bullying at home.’ 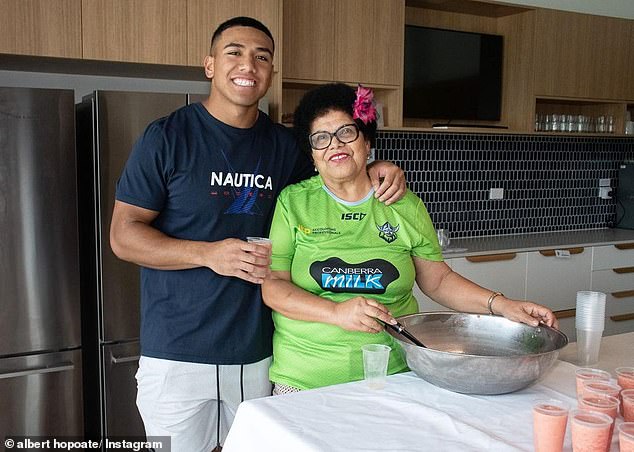 Albert (pictured with his grandmother) became the latest Hopoate to make his NRL debut in 2020. He’s currently contracted with the Canberra Raiders

Sea Eagles coach Des Hasler added: ‘The Albert Hopoate story is a great story. He’s one of the great sporting stories with his perseverance, his resilience.

‘He’s a beautiful human being. If you meet him you’ll understand.’

He played five NRL games for the Sea Eagles before being released and later signed with  the Canberra Raiders on a one year deal.

He’s currently on the sidelines with a shoulder injury but is expected to return to field for the Raiders in the coming weeks. 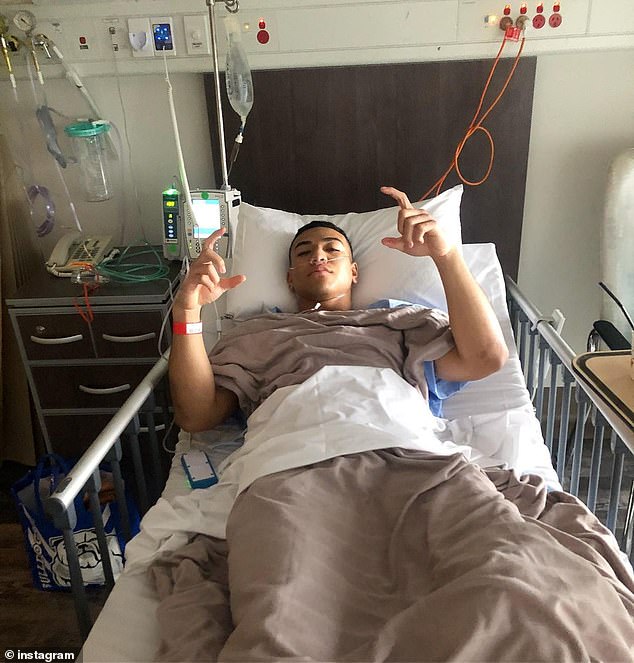 Pani started off playing junior rugby league and once scored five tries against the boys at under- 12-level.

She tried her hand at netball but is now a teenage rugby union star in the making.

Regarded as a strong and skilful front-rower who runs without fear, the Manly Mermaid rugby sevens star has been selected in Australia’s 7s program and has a number of NRLW teams chasing her signature. 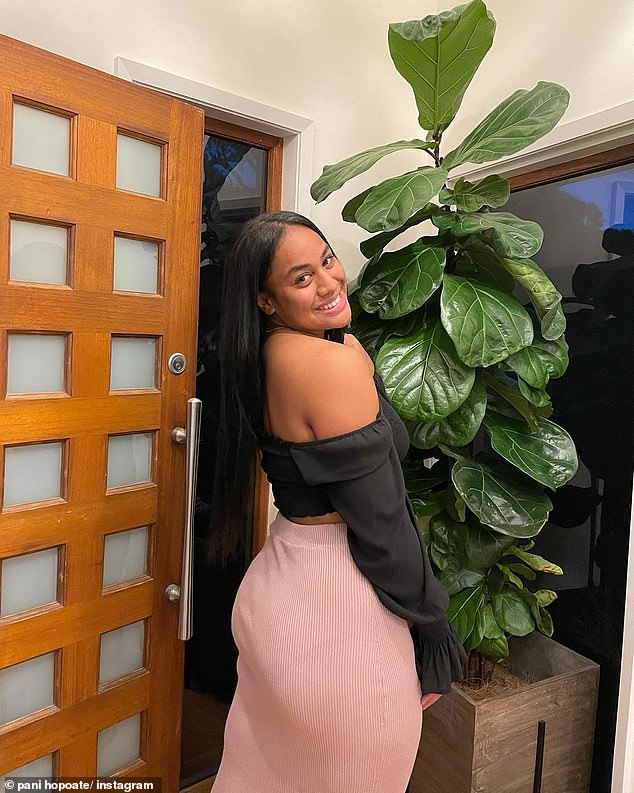 ‘I’ve got so many kids (11 at last count) that I tell them they better perform if I turn up to watch them play. She (Pani) is going well,’ her father told Northern Beaches Review earlier this year.

The family’s other rising stars

Son Sione aka ‘Little John’ was a talented junior who played in the centres for the NSW under-16 team.

He currently plays for the North Sydney Bears in the NSW Cup and was one of the Bears’ top try-scorers in the Presidents Cup last season.

‘Sione brings a strong dedication to the team, to training, and all done with a big smile on his face,’ the club posted while announcing he has re-signed with the bears in 2021.

He was part of Manly’s victorious team which won the under-16s Harold Matthews Cup earlier this month when they beat Parramatta in the final. 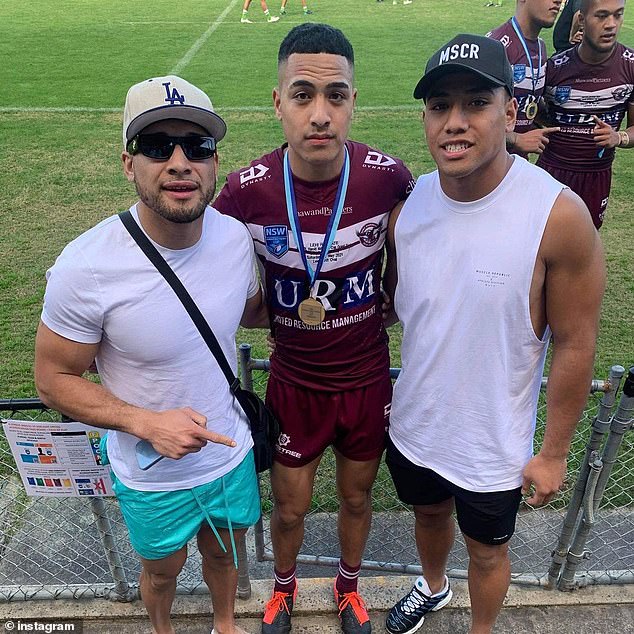