JAN MOIR: How the Windsors must sigh with relief that the Sussexes are so very far away

The Duchess of Sussex last night took part in her first TV interview since her infamous chat with Oprah Winfrey.

Meghan sat down with American talk show queen Ellen DeGeneres to discuss everything from her family to political campaigns.

And she also took part in a bizarre prank which involved her doing embarrassing actions in public at Miss DeGeneres’ command.

Meghan, who with Prince Harry quit royal life last year and moved to California, gushed about how the pair and children Archie and Lilibet were ‘very happy’.

Here, Jan Moir gives her view on the most cosy of Hollywood love-ins…

Somewhere in the back of the most cynical mind – bear in mind that this mind could possibly be my mind – the end result, and true purpose, of Megxit was always going to be the Duchess of Sussex being the star guest on a daytime chat show on American television, telling darling anecdotes about herself while wearing an expensive blouse and acting like the Hollywood star she never was.

And so it came to pass.

Yesterday Meghan appeared on The Ellen Show, where she spoke about returning to California, her new life in her £10million mansion and of course her children’s book, The Bench, which she described as a ‘sweet love story between a family’.

The book briefly became a New York Times bestseller despite the newspaper calling it ‘tortured’, which is the kind of endorsement you might hope for if you had written a thriller and not something aimed at the under-fives.

Never mind. ‘Welcome to my friend Meghan, the Duchess of Sussex,’ drooled Ellen as the masked audience gave the surprise guest a standing ovation.

Sitting on cream armchairs, the two alpha women wasted no time in publicly establishing their friendship by agreeing they were ‘neighbours and see each other a lot’.

From the get-go it was clear that Meghan was in her element, radiant in a pricey Oscar de La Renta top, lobbying for paid parental leave and humble-bragging about how poor she was as a jobbing actress in LA when she couldn’t afford to fix her car.

Oh no, I thought. Any minute now we’ll be back in the Sizzler’s salad bar crying over the cucumbers.

Thankfully the Duchess skipped that chapter in her vigilantly curated legend of childhood privations. And yes, we have heard this climbing-through-the-car-boot anecdote before, but Ellen seemed enthralled.

Meghan was in effusive mode, bubbling on about trying to make it in Hollywood and her previous visits to this very studio to audition for parts.

‘I would park on gate three and I would scoot on over and the security guards would always say “break a leg, I hope you get it”,’ she said.

Those not paying attention might have thought this was a reference to the pre-wedding Tiara Incident at Buckingham Palace, but no. 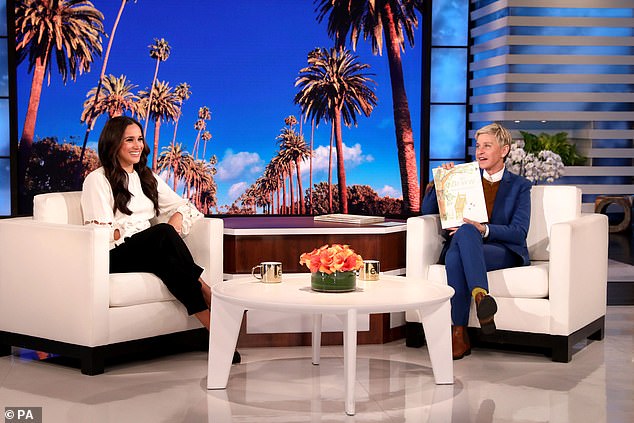 Neighbours: Ellen DeGeneres and the Duchess

It was just more touching testimony about Meghan’s struggle.

Brace yourselves, because there was a truly excruciating Candid Camera interlude where the Duchess of Sussex took part in an Ant and Dec-style telly caper on the streets of LA.

The conceit was that Ellen would instruct her, via an earpiece, how to interact in public with market traders selling quartz crystals and hot sauces.

‘Mommy wants some heat,’ Meghan had to say at one point. Then she had to squat, touch her nose and make noises like a cat.

She also complied with an instruction to ‘eat like a chipmunk’. Dear God. The House of Windsor must sometimes utter a sigh of relief that the Sussexes are out of the royal fold, thousands of miles away in the kind of showbiz bubble where this undignified nonsense is acceptable.

What on earth was going on in Meghan’s mind, not to mention the combined supposed PR smarts of her team of highly paid advisors? It wasn’t funny, and made her look like a bit of a fool.

Those who had hoped for a picture of mysterious daughter Lili were disappointed, although there was another photograph of TBOAH (The Back Of Archie’s Head). There was also talk of the Halloween costumes Archie and Lili wore this year, and how Ellen (and presumably her wife) spent some quality time together with the fam. ‘We saw you guys, which was great,’ said the duchess.

MeGHAN also spoke of the last Halloween party she and Harry went to together before news of their relationship broke around the world.

‘We were able to have one final fun night out,’ she said, adding without irony that the party had ‘a post-apocalyptic theme’. 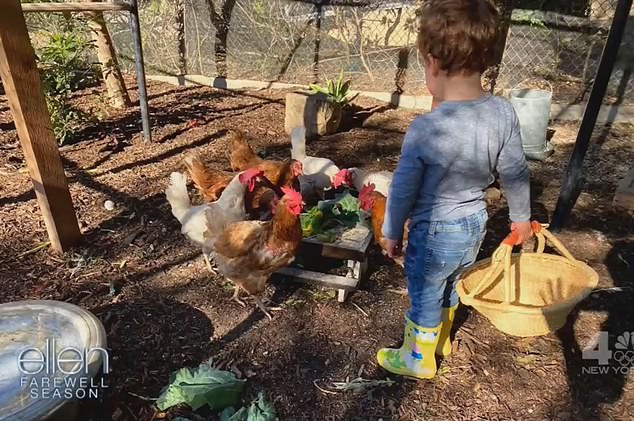 There was further irony in the fact that Meghan and Ellen were chirping away together, seemingly without a care in the world, although both women have recently suffered reputational damage as their public standing for being sweet and nice has been undermined by accusations (vehemently denied by the duchess) of bullying and nastiness.

Please, nobody mention the word bully! That was certainly off-menu in this superbland and superchummy banquet of chick chat.

Instead we got corny stuff about selling scrunchies at school, making the Thanksgiving dinner herself, and baby Lili’s teething troubles – all of it, from beginning to end, manufactured to endear the duchess further to the American public, part of what Hollywood calls ‘image crafting’.

This is something the Sussexes have embraced with vigour since they arrived here, relentlessly grooming their characters and glossing their prestige.

What with this and their every move constantly being filmed by their own cameras, one wonders what it is that Meghan and Harry ultimately want to achieve. That’s what I want to know.

In the meantime, Mommy might want some heat, but a little more decorum and cool judgment might not go amiss.