JAN MOIR: Prince Harry can’t turn his back on Britain but keep the baubles of a Disney princeling

Time to consult ye olde crystal ball, shuffle the tarot cards, dig out my trusty drivel diviner to see what 2021 holds for Harry and Meghan and — uh oh!

The Sussexes are just over a year into their great finding freedom caper but if events of recent days are anything to go by, we have barely moved on from the petty hurts and status grievances first aired at the Sandringham Summit back in January 2020.

Misunderstandings about names on birth certificates or the lack thereof; the continued use of military titles deserved or undeserved; the implications of the word ‘royal’ itself; the old ways versus the new freewheeling style? Border skirmishes over the hastily staked out parameters of the new Sussex badlands seem to continue without respite.

Harry and Meghan wanted a new life and by God, everyone now knows exactly why and understands precisely how they were wronged and undermined at every fraught step of the way.

Many even sympathise with their plight; these headstrong possessors of razor-edged, first-class egos thrust into second-class roles by dint of protocol and that annoyingly immutable line of succession.

Harry and Meghan (pictured above) wanted a new life and by God, everyone now knows exactly why and understands precisely how they were wronged and undermined at every fraught step of the way, writes Jan Moir

We all understand there can be no greater purgatory than being a member of a family where you feel you no longer belong. So Harry burned his bridges and Meghan torched her collection of garden-party hats and off they went in smoky collusion, united by their mutual loathing of restrictive royal conventions.

Except, of course, when those conventions suit them and can be used to monetise and facilitate their new careers in America. In which case unfurl that damned bunting, crack open the honorifics, dust off the medals and the tiaras and let’s get this party started.

After all this time, it is this conflict of royal interest that is still, still, still the problem.

Prince Harry is ready to ‘fight’ with Palace courtiers in a bid to hang onto his military positions, which include ceremonial and social roles across all three Services: Captain General of the Royal Marines; Honorary Air Commandant of RAF Honington in Bury St Edmunds; and Commodore-in-Chief, Small Ships and Diving, Royal Naval Command.

One understands why he doesn’t want to let go of this triumvirate of grand titles. I mean, what is the point of it all, unless he can wear his dashing dress uniform and medals to impress orb-eyed Americans; unless he can turn up like a real, live Disney prince at gala charity events on both sides of the Atlantic, with his glowing Cinderella at his side.

The Sussexes will be a dynamite draw: she is the homecoming queen, he her prized king, dazzling in his braids and gilt buttons, even if many of their simpler, Hollywood fans think that epaulettes are best when breadcrumbed and fried in butter, served with a nice salad on the side.

Yes, our Prince is a proud Army veteran with ten years’ service and two tours of Afghanistan to his credit. No one can take that away from him. Yet the truth is Harry wouldn’t be Captain General of the Trumpton Home Guard were it not for his royal status. He just about might still be Commodore-in-Chief of Small Ships, but only the ones that bob up and down in baby Archie’s bath, next to the rubber duckies. 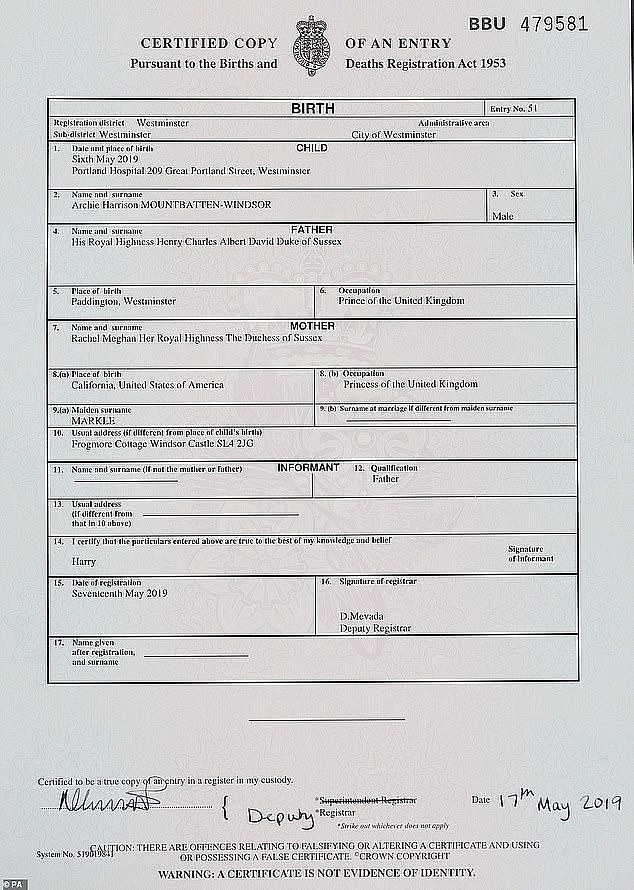 Border skirmishes over the hastily staked out parameters of the new Sussex badlands seem to continue without respite, says Jan Moir (pictured: Archie’s birth certificate before the change) 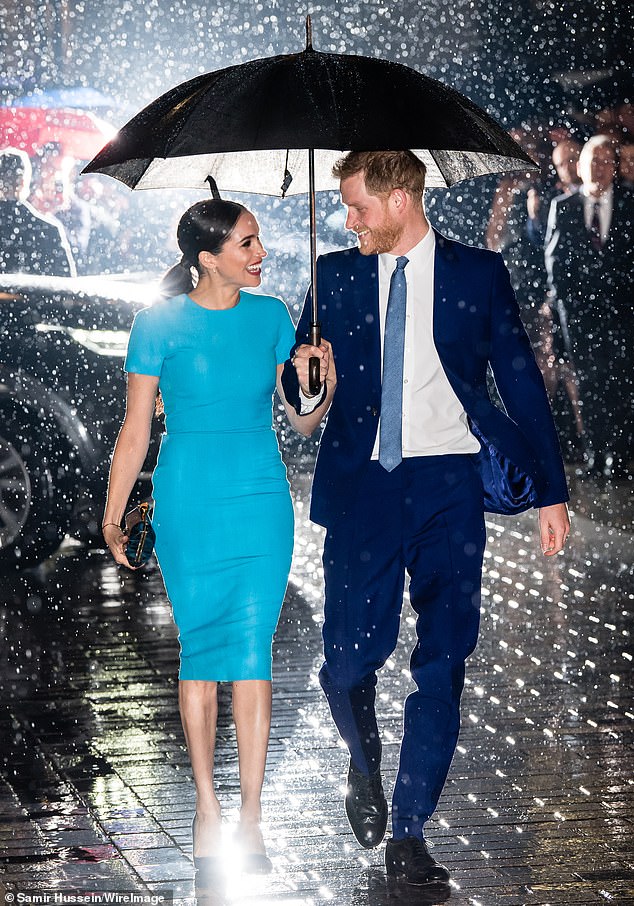 You’re either in or you are out, the Queen has decreed. But the Sussexes continue to want the best of both worlds despite these strictures.

Harry and Meghan were once so desperate to flee the horrors of royal life they didn’t even have the decency to alert the Queen to their escape plan. Yet they have never been so desperate that they desired to give up being a duke and a duchess.

If they really wanted to carve out a progressive new role for themselves, surely the encumbrance of these ancient royal titles would have been the first thing to be ditched, in favour of the sunny, Californian, linked-not-ranked meritocracy that they claim to love and admire so much.

Instead, the duke and duchess still want to take comfort and shelter in those golden ribbons of privilege that tie them fast to their celebrity status. They want to pitch their tent on the sunlit uplands of freedom, but with the guy ropes still firmly affixed to the Buckingham Palace lawns.

And it is not going to work. That much is clear. It is not fair to the Army, Navy and Air Force bodies that the Prince represents. 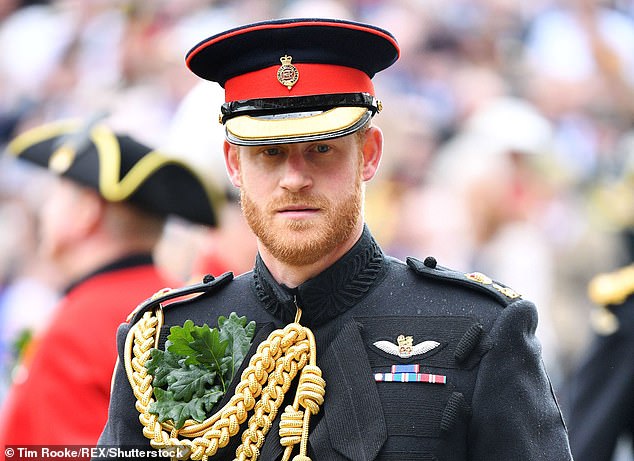 Prince Harry pictured at the Founder’s Day Parade, also known as Oak Apple Day, at the Royal Hospital Chelsea in London in June 2019

They need certainty; they need to make plans, they need to book personnel for ceremonial duties. Most of all, they need a working member of the Royal Family at their disposal, and Harry may be many things, but he is no longer that.

It is not fair on the Queen, who has done her best to be accommodating, while protecting the House of Windsor. And it is not fair on many millions of good-hearted Britons, who don’t like to see our country maligned or misrepresented as an unwelcoming, racist backwater and who so often find themselves on the wrong end of another of the couple’s pious lectures — because like it or not, in ways both big and small, Harry still represents us.

Now that his future lies in Hollywood by his own design, Prince Harry might do well to listen to the blunt but wise words of Dirty Harry, the hero cop played by Clint Eastwood in the hit series of films: a man’s got to know his limitations.

So make my day, Harry — do the right thing.

Why Cindy’s not just a pretty face

Cindy Crawford jokes she used to feel resentful that Kate Moss could eat burgers, drink alcohol, smoke and still look beautiful — while she had to work out and eat spinach.

An interview in the 1990s revealed how she felt about her own beauty. ‘Even I don’t wake up looking like Cindy Crawford. Do you think this just happens?’ she said, indicating her perfect body.

Cindy has always been a smart girl, firmly rooted in her native Midwest sensibilities. ‘When getting ready to become a mother, being in love with someone just isn’t enough,’ she once said. ‘You need to think about whether he would be a good parent and help raise your children with similar beliefs.’

I say much the same to young friends and colleagues. Don’t fall in love with the handsome but penniless poet, I cry. Get a boy who will love you for ever, but also knows DIY.

If only Cindy — or me — had been around to advise the five ex-wives and girlfriends who now claim Goth rocker Marilyn Manson abused them. Was there nothing, I ask myself, about his appearance, attitude or behaviour that could have alerted them to the alleged horrors ahead? Love can be blind, yes, but sometimes it is deaf and dumb, too.

BBC Arts Editor Will Gompertz has criticised Gillian Anderson’s depiction of Margaret Thatcher in The Crown (Netflix). ‘She flounders badly as the Iron Lady,’ he meekly opined.

Well done, Will! Someone had to say it. For this carpet-chewing portrayal of the former prime minister was preposterous in every way. The wig was great, the costumes impeccable — but as Mrs T, Gillian shuffled around like a half-shut knife.

In some scenes she appeared to be hunchbacked; Richard III reborn in Aquascutum suits and power brooches. 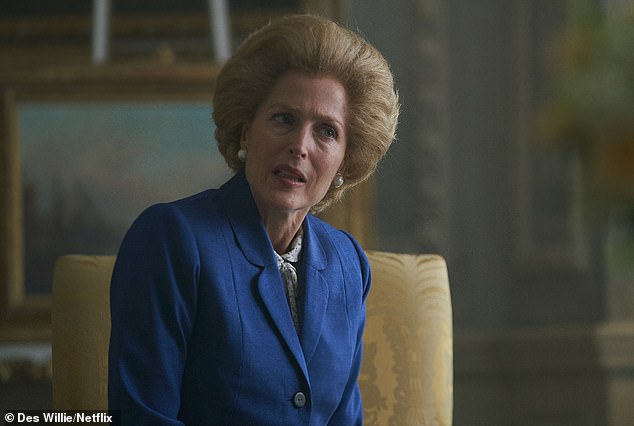 Walking the corridors of power, for reasons unknown, Gillian (pictured) affected a stoop so profound it suggested Mrs T had developed a keen interest in her own kneecaps. Should we even mention that curious way of talking out of the side of her mouth, as if every sentence was going to be presaged with a ‘pssst!’

Theatricality sometimes has a solemn purpose, but not here.

Speaking of the hump, Miss Anderson was not best pleased with the criticism. ‘The degree to which it was personal and hurtful says more about him than me,’ she huffed.

Honestly. Mr Gompertz presents Gillian Anderson with the precious gift of candour, only to have it cruelly thrown back in his tonsure.

The lady is not for gurning, as someone almost said, but that was what it looked like onscreen.

I didn’t need to clap to honour a hero

Actually, no, I did not clap for Captain Sir Tom Moore on Wednesday night, thanks for asking.

Unlike our leaders, Boris and Carrie, the charmer Starmers and many others in both public life and as private citizens, I did not take to the streets to applaud.

I felt sad at his passing and grateful for his achievements and contribution, raising almost £33 million for NHS charities and cheering everyone up at a time when we all needed a boost. 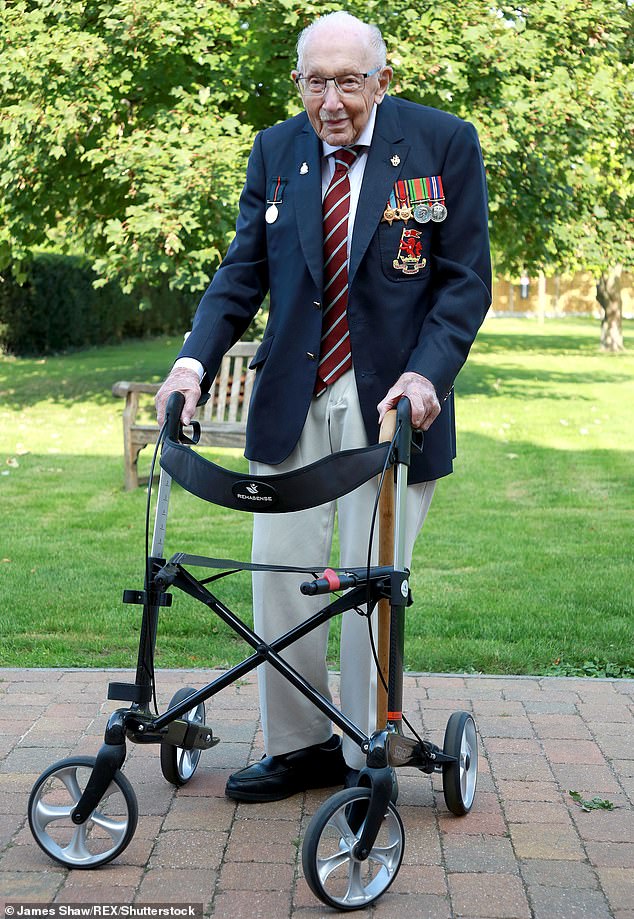 Captain Tom Moore, pictured above, was a wonderful man, the best of British, a much-loved father and grandfather whose life ended surrounded by love, writes Jan Moir

But there is something about these orchestrated shows of public support that is beginning to chafe.

This is no criticism of those who took part, only an acknowledgement that these public displays no longer seem spontaneous, heartfelt and unaffected. At best, they are still sincere and well meaning; at worst, a little showy.

It is no longer enough to care about anything — you have to be seen to be caring.

Capt Sir Tom was a wonderful man, the best of British, a much-loved father and grandfather whose life ended surrounded by love.

I sent up my own little prayer for him, clapping inside my soul.

However, neither will I be signing the petition to give him a state funeral — a rare honour given only to senior members of the Royal Family and occasionally politicians.

The last one given to a non-royal was for Sir Winston Churchill in 1965. Can everyone please just calm down and get a grip. 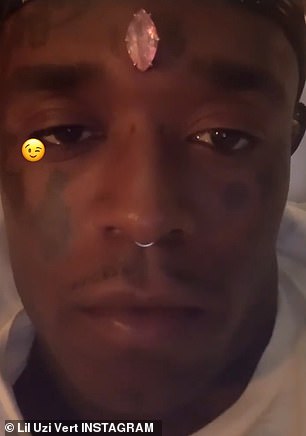 An American rapper called Lil Uzi has had a £17 million pink diamond inserted into his forehead.

Repeat. Inserted into his forehead.

As in attached to a gold bar and then pierced into the skin above his eyes.

He loves it, despite the fact it looks, from certain angles, like an open wound.

The diamond cost a fortune, but he could have saved millions and delivered the same message by simply writing I AM AN IDIOT on his forehead with a Biro.

‘Beauty is pain,’ he said after the diamond insertion.

Lil, come back to me after you’ve had a bikini wax and an eyebrow threading.

Some doctors have decided not to open their practices on Sundays to do vaccinations. Relax, GPs! Put your feet up and pop the kettle on. Anything good on telly? Run a nice bath and fill it with bubbles.

Let it all hang out. Take stock. Take a rain check. Smell the roses. While you are at it, have a lie-in on Monday morning.

Why not? It’s not as though there is a pandemic on or anything.