Will they or won’t they? Could they or should they? Can they finally make it across the speckled beige carpet in the living room to kiss passionately and declare their love for each other at last? All we can do is pray.

The second series of the wonderful BBC2 sitcom Mum ends tonight, and countless viewers like me will be hoping that Cathy (Lesley Manville) and Michael (Peter Mullan) can somehow put aside their timidity and endless tiny but incapacitating embarrassments to say what we all know to be true: that they are in love with each other, they need each other and they deserve the happiness that being together would bring.

Over 11 episodes across two funny but heart-wrenching series, their tentative relationship has evolved in stutters and misunderstandings, as fragile as a newly hatched duckling trying to paddle aboard the departing love boat.

The second series of the wonderful BBC2 sitcom Mum ends tonight, and countless viewers like me will be hoping that Cathy and Michael (pictured) can somehow put aside their timidity and say that they are in love with each other 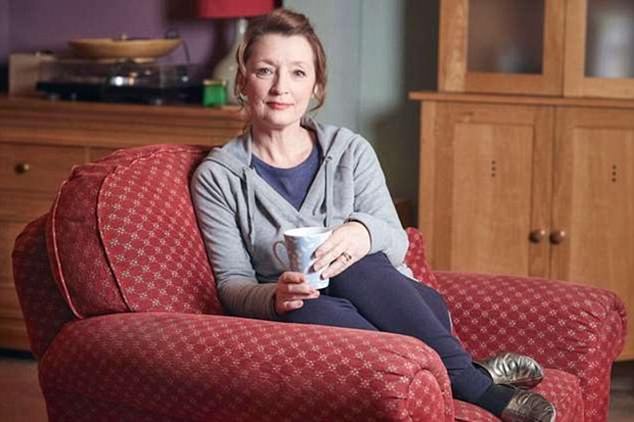 It typifies the understated joy of Mum, a new TV classic that is both a masterclass in superb acting and a reminder that great family drama doesn’t need to be crude or cruel or desperately edgy to be a success

So far, they have held hands on New Year’s Eve and been to the garden centre together three times. In last week’s episode, Cathy hung out the washing, pegs in mouth, as Michael stood next to her.

As usual, he was a simmering Krakatoa of unspoken emotion, a swain full of pain in regrettable shorts. Suddenly she forgot the laundry and flung her arms around his neck, their first ever physical contact.

No words were spoken, no lips actually kissed but — gulp — the sight of this middle-aged couple hugging in a suburban garden, clinging on as though each other were the life-raft they had long awaited, was deeply, blubberingly moving.

It typifies the understated joy of Mum, a new TV classic that is both a masterclass in superb acting and a reminder that great family drama doesn’t need to be crude or cruel or desperately edgy to be a success.

No wonder writer Stefan Golaszewski won a Bafta for this beautifully observed study of a very British romance, played out in a working-class milieu of dips and crisps, bank holiday get-togethers and overflowing wheelie bins.

Yet while it is a comedy gem, what sets Mum apart is that it also sparkles with a rare poignancy.

Issues such as bereavement, loneliness, inter-generational conflicts and old age are all in the spotlight, too, sprinkled with some sharp emotional insights.

Perhaps best of all, for once, working-class life on television is triumphantly and affectionately captured without resort to mockery or caricature, to scoring cheap laughs or even cheaper political points.

There is none of the slyness of Mike Leigh’s films (Life Is Sweet) to endure, no Jimmy McGovern (Brookside, Broken) agitprop to negotiate, no EastEnders grimness and none of the pantomime farce of, say, Birds Of A Feather or Gavin & Stacey.

Instead, Mum focuses on the quiet aspirations of lives lived in the margins, and treats their everyday hopes and dreams with respect and affection. 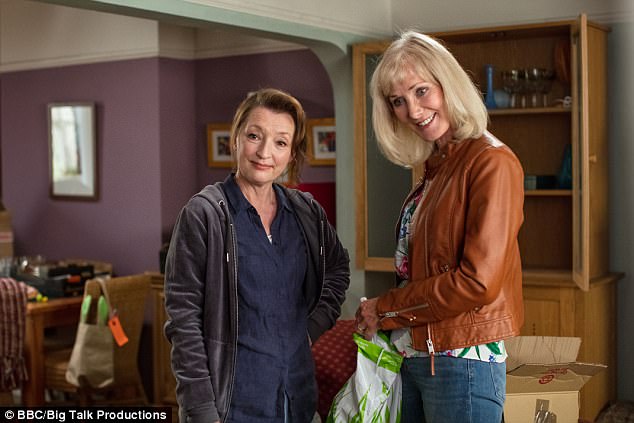 Yet while it is a comedy gem, what sets Mum apart is that it also sparkles with a rare poignancy. Issues such as bereavement, loneliness, inter-generational conflicts and old age are all in the spotlight, too, sprinkled with some sharp emotional insights (pictured: Cathy and Lyn)

The story so far. Widowed Cathy is trying to hold on to her sense of self in the aftermath of her husband’s death.

One of his old friends, Michael, has been secretly in love with Cathy for years. However, now that she is free, his lack of confidence — and weak bladder — means he is too timid to make an approach.

He even parks his car on the other side of the street when he comes to visit — a hulking bit of emotional symbolism of which he remains gruffly unaware.

The first series of Mum opened with Cathy’s husband’s funeral, while the second began with her 60th birthday. ‘Seems like only yesterday when I was 16,’ she sighs, unaware that Michael, who is wearing a new shirt ‘straight out of the packet’ for the occasion, has a bootful of presents in his car, but is too shy to hand them over.

Her idiot son, Jason (Sam Swainsbury) and his even more idiotic girlfriend, Kelly (Lisa McGrillis) still live at home, a pair of sweet but selfish millennials. Cathy’s late husband’s parents, Reg (Karl Johnson) and Maureen (Marlene Sidaway), often come to visit, but are foul-mouthed and hard to please, while her brother Derek (Ross Boatman) is always trying to improve himself and buys suedette jackets off the internet.

Best of all is the obligatory snob, in this case Derek’s partner, Pauline (Dorothy Atkinson). She smokes, bristles with an inferiority complex (‘I don’t work in a supermarket; I work in Waitrose’) and thinks herself a cut above. ‘Imagine me in an NHS ward. I’d have to burn my clothes afterwards,’ she trills.

Yet when Cathy puts shallots in a casserole, Pauline is impressed, despite herself.

The drama takes place almost entirely within the confines of Cathy’s semi-detached home, where crisp packets are discarded in her front garden and where she visits her wheelie bin more often than she visits her friends.

In Cathy’s world of the half-said and the unacknowledged, colours are faded, clothes are frayed and the ironing board is permanently up in the living room.

Birthdays are celebrated at the local carvery and people turn to look at cars passing in the street.

Cathy sorts out her cupboards, cleans her carpets at Easter and spends an afternoon spraying WD40 on all her hinges. Most of all, she cooks and cleans and picks up socks for her ungrateful family, knowing all the while that, for her, the sands of time are avalanching into the pit of old age. 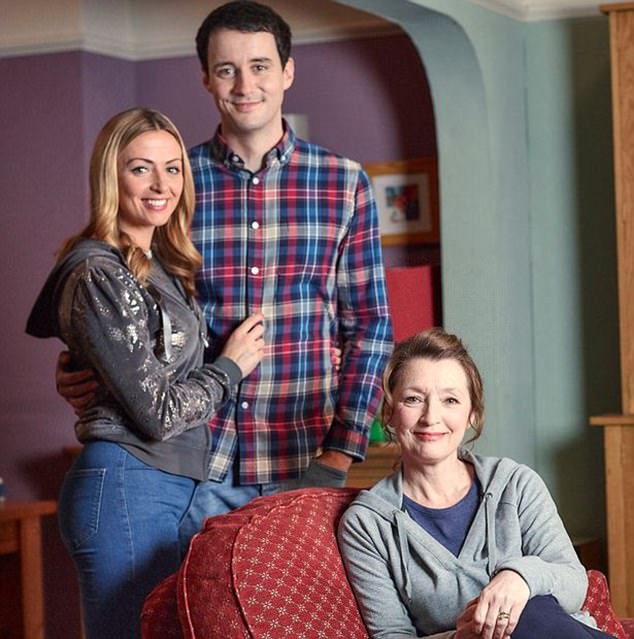 Perhaps best of all, for once, working-class life on television is triumphantly and affectionately captured without resort to mockery or caricature, to scoring cheap laughs or even cheaper political points

The pace is slow and gentle, the pauses are positively Pinteresque and the two leads are of a quality rarely seen on the small screen.

Lesley Manville brilliantly captures the muffled sadness of a freshly peeled widow who has to keep calm and carry on for the sake of others.

The first wife of Gary Oldman, she is one of our finest actresses, but she has yet to receive international recognition for her work.

How ironic that while her ex-husband recently won an Oscar for wearing a rubber mask and pretending to be Winston Churchill, her finely tuned Oscar-nominated turn as Daniel Day-Lewis’s brittle sister in Phantom Thread failed to bring home a gong.

Meanwhile, Peter Mullan, a Scottish actor best known for his terrifying depiction of hardmen in films such as Trainspotting and the Netflix series Ozark, shows that he has a softer side, too.

Here, with his feet a pair of albino Cornish pasties strapped into his tragic sandals, he manages to depict the aching loneliness of the long-distance admirer by barely moving a muscle.

Every flicker of Michael’s despair, yearning and occasional elation is there in his eyes. He is trapped in a cage of shyness, a place where love and desire are things he cannot dare to admit, even to himself.

‘To be honest, I’d be happy with a cuddle,’ he says, during an excruciating laddish conversation about sex with Cathy’s brother and son.

I don’t think I have ever seen a television drama in which every single part is so beautifully played, from the eponymous role to the lowliest character.

Jason and Kelly artlessly represent the selfishness of youth and the casual cruelty of ageism, but we are also aware that he is still grieving for his father, while she yearns for a mother’s love.

Meanwhile, Reg is in the grip of bad-tempered senility, but now and again this bereaved father crumples on the sofa, in despair over his lost son.

How absolutely cheering to know that a traditional British TV comedy on a terrestrial TV channel can still attract the very best talent in the business.

Mum slipped onto the schedules with little fanfare back in 2016 and has now been given the go-ahead for a third series. If you have missed out, this quiet classic is worth seeking out from the beginning on DVD and iPlayer.

Meanwhile, tonight at 10pm, Cathy and Michael will once more face each other, on the threshold of a love that dare not speak its name.

‘It changes your perspective when you lose someone,’ she told him two episodes ago, when his mother died. ‘It gives you a kind of courage.’

Will there be enough courage for him to park his car on Cathy’s drive at last? Only time will tell.