Yes, yes, oh my God. I am outraged at the sleazeball Presidents Club bash at the Dorchester Hotel.

I am appalled by this gropers’ gala, this fiesta of hot paw fumble where captains of industry and their sweating underlings palpitated with lust, bow-ties akimbo, as they were welcomed by pretty young hostesses at the hotel door.

I suppose one must be glad the Club has closed down, despite raising more than £20 million for charity over the years, and that no one will ever again be humiliated by a David Walliams after-dinner joke, an underdone 34-day-old fillet steak, or a pathetic creep who is big in the insurance business insisting on holding your hand as he eats his pudding.

But can I say something?

I wasn’t that outraged. I wasn’t that shocked. I don’t think that Great Ormond Street Hospital should have sent their money back in a fit of high-profile pique.

Self-righteousness versus a new kidney machine for the kiddies? It’s a no-contest. I don’t think for one second that all the men behaved badly, although you can bet that some of the dopes did.

I find it sad that this kind of retrograde, men-only gallivanting for City types is still going on — in 2018! — but while I think it regrettable, I didn’t think it was that terrible.

Come on. Certainly not as terrible as Jess Phillips MP, who was practically oscillating with rage as she talked of young women ‘bought as bait for rich men’.

Businessmen outside the secretive Presidents Club charity dinner, at which more than 100 ‘hostesses’ were brought in, with some reportedly being groped and propositioned. It not suggested those in this image took part in an impropriety

Not as bad as London mayor Sadiq Khan and Commons Speaker John Bercow, the Pinky and ever-so-Perky puppets of fashionable outrage, quick on the double draw to get their squeaky voices heard on the latest scandale du jour.

Mr Bercow feels the issue is ‘a matter of the utmost importance’ while Mr Khan is ‘utterly appalled by the behaviour’.

One might have hoped the London mayor would be rather more appalled by the huge rises in knife crime, killings and robberies on the Capital’s streets, but there you go.

However, it was a bad business.

There is no excuse for the unedifying spectacle of grown men who should know better being boorish in the presence of pretty young girls.

Yet I can’t quite agree with the heart-rending depiction of these 130 hostesses as poor little sex-Cinderellas adrift in a swamp of victimalia, forced at the point of a nail file into skimpy dresses, matching underwear and high heels.

Then made to sign non-disclosure agreements and have their phones removed. Most of those commentators and politicians who have been shrieking the loudest will certainly have been to celebrity parties, to theatre first-night celebrations or film premieres and the like where it is normal for hospitality and waiting staff to undergo the same strictures, give or take the black knickers.

As the Presidents Club hostesses were required to be ‘tall, thin and pretty’, presumably they understood and accepted that they had been hired for their looks — and the nature of the men-only event. Bawdy, one supposes, but not criminal.

The girls were paid £150 for a six-hour shift, plus £25 for a taxi home — pretty good money, considering that the minimum wage is around £7 per hour, depending on age.

Plainer waitresses who toil unnoticed in the Dorchester banqueting suites and restaurants could expect a much more punishing or back-breaking shift for a third of the money, followed by a trip home on late-night public transport.

Of course, no amount of money in the world could ever justify a man touching a woman against her will, but a sense of perspective here wouldn’t go amiss, if only to dampen down the rising hysteria.

The police are being asked to investigate, even if, at time of writing, no one has complained of any crime being committed. Somebody said that somebody said that a man had exposed himself — awful, if true. Bottoms were pinched. Idiots were idiots until they got drunk, when they become even more idiotic in time-honoured tradition.

One commentator shrieked that it sent a message to ‘rich, entitled men’ that they were ‘not going to get away with it any more’.

Get away with what, exactly?

Some are reacting as if the hostesses were girlish innocents abducted by Boko Haram, sold into white slavery or worse, instead of sentient adults who made an informed decision about the nature of the evening and got out just about unscathed, with money in their purses.

Theresa May says there is a lot more work to be done to combat the objectification of women — and she is right. However, there is one thing that no regulation or piece of legislation can ever, ever change.

And that is the happy belief of ageing, mottled, pot-bellied, comb-over multi-millionaire men that they are somehow irresistibly attractive to beautiful young women. Some of these women are good at dealing with this conviction while using it to their own advantage, and God bless them every one. Some women are not and should steer clear.

In the name of charity, there is no excuse for the worst of the Presidents Clubbers’ behaviour, but let’s all get a grip. Figuratively speaking.

Dame Joan Bakewell is selling the beautiful London house she has lived in for nearly 50 years. Oh, pang of envy! 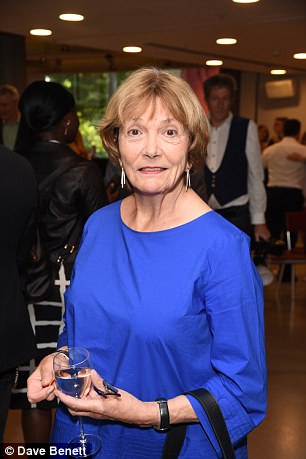 She showed me round some years ago when I was sent to interview her — and I’ve never forgotten the elegant drawing room with its three floor-to-ceiling windows, the roof terrace, the leafy garden, the airy kitchen.

At the age of 84, the arts broadcaster and former ‘tsar’ for the elderly feels she is too old for the four-bedroom, five-floor Regency house, even though she was once bookended by famous neighbours such as Jamie Oliver, David Miliband and rocker Robert Plant. ‘He was still very, very, attractive,’ she has said. Which one? ‘Robert, of course.’

Leaving must be a wrench. She lived there through two long marriages and one torrid affair with playwright Harold Pinter.

Recently, she said she didn’t believe in kitchen gadgets, because a set of ‘well-sharpened knives and nice pans’ did her just fine. ‘I am very thrifty,’ she added. ‘I pick up rubber bands that postmen leave on the step. I wear things till they’re worn out. I use up leftovers. It’s from growing up in the war.’ She wants to downsize to a flat, so she won’t have to scrimp any more — but she still will. That generation always do.

I’m sad for Bea in her bonnet

What is happening to me? I’m beginning to feel a bit sorry for Princess Beatrice — and not just because the Duchess of York (‘I’m worth £40 million’) is her mum.

Not only did Bea split from her boyfriend of ten years, only to see him get engaged six months later. Now, she has to smile through the pain as sister Eugenie announces her engagement to her lovely beau, Jack.

Thus Beatrice faces two weddings in a year; first, cousin Harry’s, then the nuptials of wee sis. Are there enough Ugly Hat shops in Windsor to cope with her millinery demands? Perhaps she will even face the ultimate older-sister nightmare — becoming a bridesmaid. 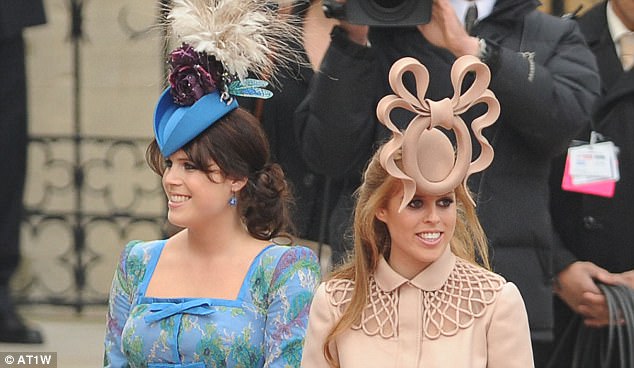 Unlike the fulsome tributes posted on Twitter from Mad Ferg, there have been no social media congratulations from tight-lipped Beatrice. Instead, the 29-year-old has been busying herself at Davos, attending the economics summit as part of her role as a ‘corporate fixer.’

Haven’t the foggiest, but I think it involves asking businessmen if they take milk and sugar and bringing granny into the conversation at every opportunity.

Poor Bea! Romance is sometimes a rotten business, but there are still plenty more carp in the pond for her.

As film stars go, he is completely gorgeous. With chocolate brown eyes and soft, russet hair you long to run your fingers though. He knows how to wear a hat and melt a girl’s heart — but it pains me to report that Paddington Bear has been ignored by the Oscar panel this year. Snubbed! Overlooked! Disregarded. This never happens to Meryl Streep.

How can Paddington 2, one of the most charming films ever made, fail to win a single nod? It has been nominated for precisely nothing, which doesn’t seem right. A hard stare for everyone who failed to recognise the greatness of this bear.

Our Holly shows the U.S. how to have a jolly

The special relationship may be intact, but there is one area where the U.S. and the UK are more than oceans apart, and that is award ceremonies.

Compare the Golden Globes and the Screen Actors Guild Awards to our National Television Awards. 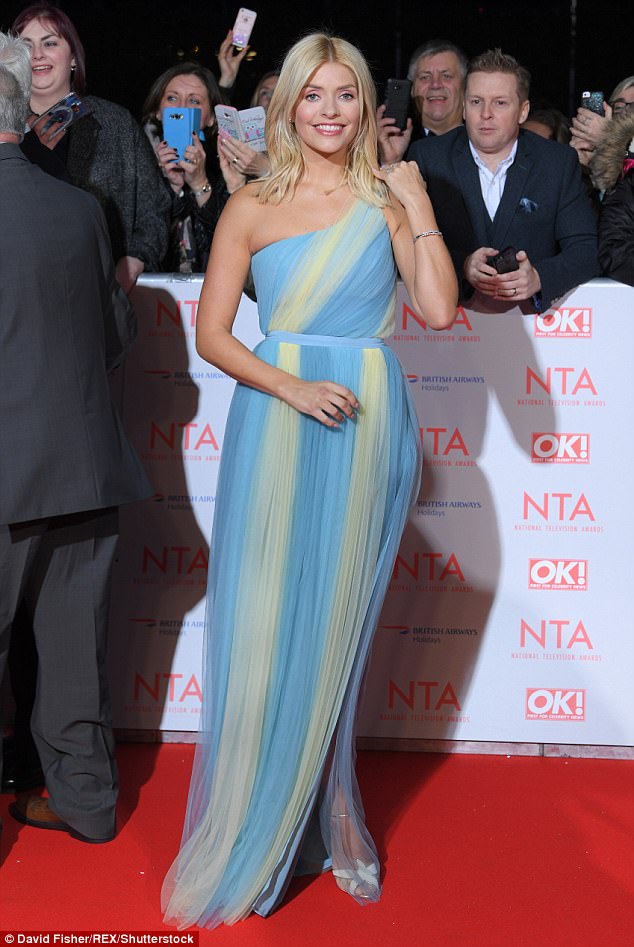 Holly Willoughby at the National Television Awards earlier this month

Ultra-disciplined American stars treat these gongfests as work. They turn up on message with prize-poodle standards of grooming. The mood is taut-jawed, humourless and please, nobody mention Harvey. Here, our stars walk the red carpet looking like wild-eyed lunatics who got dressed in the dark and drunk in their limos en route. The party is seen as a reward for work, not more work.

Holly Willoughby (pictured) and Phillip Schofield were proud of being still tipsy when they presented their show the next morning. Nobody takes it or themselves too seriously. Everybody has a laugh. And I know which side of the Pond’s pondlife I prefer.

Is the jury still out on Judge Rosemarie Aquilina, who sentenced USA gymnastics team doctor Larry Nassar to 175 years for abusing more than 150 women and children?

With the proceedings being watched by millions on TV, some felt the judge was sometimes guilty of showboating. She told Nassar the lengthy sentence she had stipulated meant that: ‘I have just signed your death warrant.’

Courtrooms, even in America, should not encourage the judiciary to show any signs of relish or gloating. Yet Aquilina was often magnificent, especially when she encouraged the young women not to think of themselves as victims.

‘Leave your pain here,’ she said, as they told their stories of childhood sexual abuse. ‘Go out and do magnificent things. You are strong, you are healthy, you are not broken, you are a survivor.’

If only more was done to encourage young women, even those who have suffered abuse, to forge ahead despite everything — and be the heroines of their own lives.