Never mind the Eastfield Depot robbery, the dead bent copper, the brothel raid, the harvested DNA, the bloody shoot-out and the diversionary car crash caused by smearing oil on the road. (Was it virgin? Only on the ridiculous.)

By far the most sensational event in Sunday night’s Line Of Duty (BBC1) was that it ended with Superintendent Ted Hastings (Adrian Dunbar) taking police legal counsel Gill Biggeloe (Polly Walker) back to his hotel. Old Testament Ted with a woman in his bed? Holy pillars of salt!

Poor Ted now lives in reduced circumstances, in a Travelodge room with a broken toilet and a photograph of his beloved wife on the bedside table. His hot date overlooked the lack of romance and the drabness.

Superintendent Ted Hastings, played by Adrian Dunbar, is an unlikely modern hero – and an even more unlikely sex symbol – but there is no doubting his appeal

‘I’m just going to use your bathroom,’ purred Gill, inching her Jessica Rabbit curves past the trouser press and into the en suite to take advantage of the free toiletries and complimentary mints included in the room rate.

Yet, before she could return, violent happenings elsewhere suggested a swift end to any hanky panky that our darling Ted would assuredly live to regret. Heaven knows what is going to happen next.

While Line of Duty is quickly becoming the hit drama of the year so far, there is no doubt about who is the shining, true blue star of the show.

DI Kate Fleming (Vicky McClure) and DS Steve Arnott (Martin Compston) are admirable sidekicks who carry out their duties to the letter of the law. However, it is their boss, Hastings, whom millions of fans love the most. 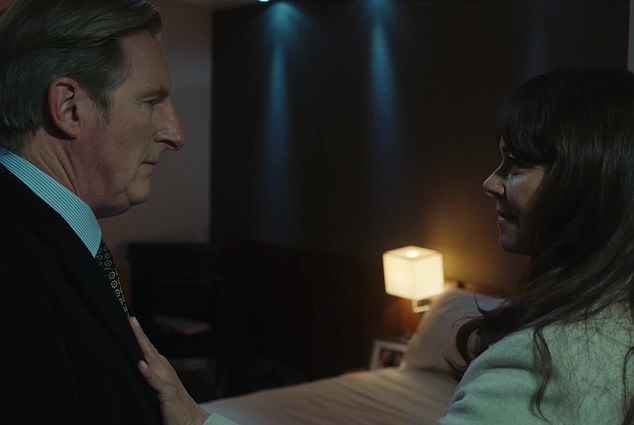 In an unlikely twist, Ted Hasting’s took legal counsel Gill Biggeloe (Polly Walker) back to his hotel – but violent happenings elsewhere suggested a swift end to any hanky panky

SuperTed is an unlikely modern hero — and an even more unlikely sex symbol — but there is no doubting his appeal. When he threatened to handcuff a suspect to a chair in the finale of the last series, huge numbers of women took to social media to exclaim that if darling Ted was determined to go around handcuffing people to bits of furniture, then he could most certainly count on them to be willing accomplices.

What do they see in the middle-aged, no-nonsense copper whose granite personality, craggy profile and humourless charm come wrapped up in a police blouson and a dinosaur dose of old-fashioned sexism?

He’s certainly proof that substance and a commanding air can be so much sexier than mere good looks. And while Hastings may have just promoted Fleming, he still sees her in fond but reactionary terms.

‘She’s a great wee girl doing a bang-up job,’ is how he puts her career trajectory to date. Feminists, look away now.

Yet women — and men — still adore him. Perhaps it is because in these uncertain times he represents the trustworthy good guy and the kind of urgent authority that seems so absent from blundering public life? 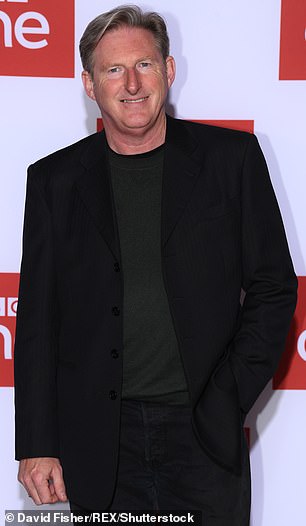 Adrian Dunbar, who plays Ted Hastings, is proof that substance and a commanding air can be so much sexier than mere good looks

Certainly for over 20 episodes in four previous tv series, Hastings has always been the true north on the Line Of Duty moral compass. A man of principle and honour, outstanding at being an upstanding officer, someone you could trust to do the right thing. OR COULD YOU?

As the senior investigating officer of the anti-corruption unit AC-12, he is charged with seeking out wrongdoing among the police rank and file.

Over the years, he has become a folk hero for his blunt speech, his Northern Irish aphorisms (‘now we’re sucking diesel’) and his unassailable probity. Not, we are being asked to believe, that he might be the criminal mastermind behind, well, everything.

I’m not sure how much more I can take. It would be like finding out that Santa Claus didn’t exist.

Dunbar was at the BBC screening launch of the new series a few weeks ago, and when fans asked him if we could still trust Ted, he was adamant. ‘Yes, you can!’ he cried, looking dapper in a black T-shirt and fashionable specs, while blowing kisses into the audience. But did he mean it? I mean, really mean it?

For this 60-year-old actor, playing Hastings has been a ‘game-changer’, bringing him the big break — at last! — that every actor longs for.

Joiner’s son Adrian was born in Enniskillen, later moving to Portadown, where his dad sought work. He moved to London in his 20s to seek work as an actor and everyone knew he would be a success.

One of his teachers at Drumcree College said: ‘He was always destined for the stage. It comes as no surprise that he made it big. He was a brilliant lad.’

Over the years, he has starred in various TV shows such as Cracker, Inspector Morse, Ashes To Ashes and A Touch Of Frost, and appeared in hit films including The Crying Game and My Left Foot.

He also co-wrote and starred in the 1991 movie, Hear My Song, based on the Irish tenor Josef Locke.

Police lawyer or no, you will address me as Sir.

What are you waiting for? The No 19 bus?

I am calm! I am totally bloody calm!

This department’s been watertight for years, fella, and now it’s leaking like a colander!

I didn’t float up the Lagan on a bubble.

I can guarantee you 110 per cent none of my people would plant evidence. They know I would throw the book at them — followed by the bookshelves.

Right, back to the coalface, unless you’ve got more egg-sucking tips for your granny.

This is beginning to feel like a life’s work.

However, this is his longest-running role and he sees Hastings as someone who is ‘highly moral and loyal’.

Taking inspiration for Hastings from football managers Bill Shankly and Sir Alex Ferguson, Dunbar describes him as someone who is ‘like all of us, struggling to be good’.

It is that dark struggle that concerns us here.

For somewhere across town his estranged wife Roisin (Andrea Irvine) was being taken hostage by the increasingly unhinged John Corbett (Stephen Graham).

As the episode came to a close, we left Ted on the bed with his hands on his head. His seed perhaps unsown by the ringtone of a phone. Another blow to leave us low on this head-spinning show.

For are we really to believe that not only is Ted Hastings the bent copper behind the organised crime gang who have committed every murder and robbery since series one, but also this God-fearing Ulsterman is now about to commit adultery, too?

Jesus, Mary and Joseph. Have we forgotten that he takes nuptial vows seriously?

‘I am a married man,’ he told Biggeloe when she tried to seduce him in a wine bar back in series three. ‘We took vows,’ he wheedled, when his wife told him last week that she wanted a divorce.

Give me strength, fella. Ted was always a full beam of goodness, now he is low and vulnerable; skulking around, destroying his laptop and acting suspiciously.

Line Of Duty has always been about moral ambiguity, who can or cannot be trusted, in or out of uniform.

However, if Ted turns out to be the black pip in the barrel of bad apples? We’ll never get over it.