JAN MOIR: Why it’s better to be a Scrooge than a flashy Rooney this Christmas

Not even the end of November and, already, the Christmas pressure is on, on, on.

As usual, Coleen Rooney has made a strong opening move with her annual family Christmas card. This year, it features a photograph of her four apple-cheeked sons, cute as buttons in their reindeer pyjamas, posing amid a cosy festive scene. Beat that, mums and dads!

For Coleen, multi-millionaire footballer husband Wayne and their lucky, lucky children, Christmas is a time of excess; of giving but, most of all, receiving the best that their wealth can buy.

Whatever Kai, Klay, Kit and baby Cass want Santa to leave under the tree, you can bet it will be there. With bows on.

Yet it is not like that for everyone. This week, a father of five appealed for donations on online fundraising platform GoFundMe in order to give his family a good Christmas. Ben Buckley, from Hull, said he needed help after having to reduce his hours at work when his wife became ill during her latest pregnancy — their baby is now two weeks old.

Festive scene: The Rooney boys on the family Christmas card

The 32-year-old warehouse worker asked for £2,000 — which was quickly raised by 132 generous strangers. Bless them, every one.

He is grateful, but not everyone is happy about the situation.

Mr Buckley has been abused by the usual foam-flecked mob of online lunatics, while his stepfather called his actions ‘begging’ and was embarrassed. ‘I wish he had spoken to me first,’ he said, revealing that he had financially helped out the family a while ago.

As the season of goodwill approaches, one wants to be kind. Certainly, many of us would rather donate to someone like Ben and his kids than some faceless international charity whose executives pay themselves six-figure salaries.

We can’t all be Rooneys, after all. And plenty of families who are in better financial positions than the Buckleys will not be spending anything like that amount of money on their family Christmas.

Meanwhile — call me ‘Mrs Scrooge’ — but why have another child if you cannot afford the ones you already have? Surely that is just sailing blindly into more financial trouble, when perhaps a bit of thought, planning and restraint might have averted further calamity. It seems wrong to just do what you want, while appealing to others for financial support.

However, Mr Buckley is reportedly a devoted dad and not a big-spender; his wish for his children to have a nice time after their difficult year is both understandable and commendable. And you can see the dilemma in which he and other scrimping parents find themselves. In years gone by, children were happy with whatever they got; an orange, a sixpence, Meccano, a skipping rope.

In contrast, children today are bombarded with adverts featuring the latest toys and computers — they know to the last gigabyte exactly what they are missing out on. And to compound their misery, they only have to look online to see the Have Toys boasting to the Have Not Toys about their latest haul of fun goodies.

However, is crowdfunding really the answer to the heart-breaking toy gap?

Many families struggle at this time of year and, while it might work this time for the Buckleys, what about next Christmas and the one after that? And what message does it send to their children, who might also be embarrassed when they find out what happened?

Surely, in the long run, it is better to live within your means, however difficult that might be.

To try not to be influenced by, or envious of, the gasping wealth or relative affluence of others.

It’s hard, I know, not to dwell on the unknown British ticket-holder who won £76.3 million in the EuroMillions draw earlier this month. Or Denise Coates, the Bet365 boss and her £265 million salary. Or, indeed, the lavish life of the freewheeling Rooneys and their little boys, a cosseted quartet who will never want for anything material in their lives.

Christmas puts struggling parents under intolerable pressure in a mercenary world that’s warped us all. Yet the truth is that, ultimately, both the Rooney kids and the Buckley brood will be happy just having their parents with them and being loved. Although they might not realise that for many years to come. Merry Christmas, everybody!

Oh my god, did you see it? Grown men sobbed. Women were hysterical. Everyone was crying at the tragedy. Simon Cowell almost called an ambulance. No, not the baby penguins traumatised in Antarctica: I’m talking about Cheryl’s comeback on last Sunday’s X Factor.

Making her first live performance in four years, the Geordie pop star climbed aboard what looked like Ross Poldark’s disco boots to sing her new single, Love Made Me Do It.

In a bizarre performance, she crawled about like a cat, rubbed her bottom and licked her hand. Did she want a saucer of milk or to be wormed? No one was sure. ‘Is she all right?’ Cowell asked afterwards. Good question!

More than 45 people have complained to TV regulator Ofcom that the routine was too sexy — and perhaps not all of them were Cheryl herself, trying to whip up interest in her Desperation Made Me Do It comeback.

After everyone had had a good laugh, Cheryl complained on her Instagram account about the ‘sheer level of unbalanced negativity’ and ‘relentless abuse’ she had received in the Press. Oh dear. I don’t think this is going to end well.

I have always adored those glossy magazine articles — so prevalent at this time of year — that show hard-working hags such as me how to nail day-to-night dressing.

By adding heels and a dab of lipstick, we are supposed to transform ourselves from desk drudges to belles of the ball in the wink of a zirconium diamond.

Well, here is Myleene Klass, showing the way. At 3pm, our girl is struggling through the rain (left). A mere five hours later, with the aid of a 20-man glam squad, nuclear-powered hair tongs and a bronze tinfoil dress, Myleene has been transformed from day to night in style

Yeah, right. The only thing I find transforming about an after-work party is a quickly refilled beaker of adult beverage, followed by a swift dash home to my jim-jams. How do others do it? Well, here is Myleene Klass, showing the way. At 3pm, our girl is struggling through the rain (inset), wearing an anorak and an expression that either says: ‘I hate my life’ or ‘Where is my bl**dy limo?’

A mere five hours later, with the aid of a 20-man glam squad, nuclear-powered hair tongs and a bronze tinfoil dress, Myleene has been transformed from day to night in style.

Still, cheering to know that glamour is just a mirage — even for someone like her.

Penguins aren’t people, so why pretend that they are?

The latest episode of Dynasties on BBC1 featured the emperor penguins of the Antarctic — and was a triumph in many wonderful ways.

From the opening shots of the sea icing over, to the blue icebergs clinking in the bay, and the sole penguin making his way across the icy tundra, it was a thrill a minute.

The landscape, the plight of the birds, the horror of the wintry weather — marvellous stuff.

Yet there were uncomfortable moments when it became more of a soap-opera icecapade than a serious nature programme making intelligent points.

For a start, encouraging viewers to fantasise that mummy and daddy penguin are sad because baby egg penguin has died is taking anthropomorphism too far. 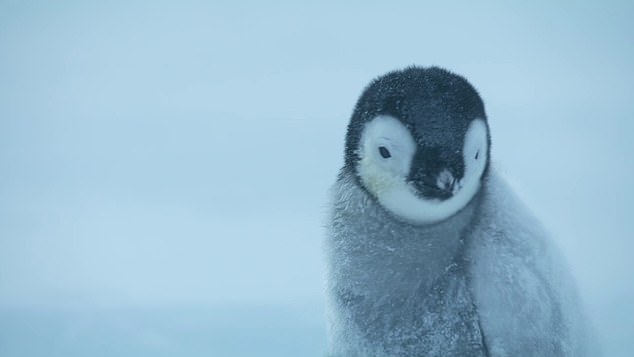 Then there was the hushed, portentous voiceover by Sir David Attenborough, talking of penguin love (‘the process of finding the perfect partner cannot be hurried’) and their domestic dilemmas.

‘This mother had to make a terrible choice: to save herself, she has abandoned her chick,’ he whispered.

The penguin in question ambled up an ice gully without a backwards glance, leaving junior to freeze to death accompanied by the sweep of super-sad orchestral music.

But this creeping tendency in nature programmes to stir up emotions and to entertain more than educate is pernicious.

Like everyone else, I love penguins, but they are wild creatures, not characters in a particularly heart-rending episode of SouthEnders. Let’s stop this guano now.

A fishnet stocking table lamp in mint condition. A selection of velvet smoking jackets (some slight staining to front). A set of chunky Playboy logo cufflinks for the lothario in your life. Yes, walk, don’t run, to the Hugh Hefner auction, in which his personal trinkets will go on sale to raise funds for his Foundation. ‘And to protect his legacy,’ said one of Heff’s women, presumably meaning herself. Among the items to be sold are a black book detailing the private highlights of Hefner’s sex life and a statue of Betty Boop — although it is not clear if these two items are related. Photos of his Playboy Mansion boudoir reveal a wall covered in pictures of the person he loved the most . . . himself. Aren’t men awful?

The Informer is dark, shadowy . . . and super

The Informer, on BBC1, has been one of the best police dramas of 2018, but has inexplicably received little of the praise and hysteria that surrounded Bodyguard.

The latter, starring Richard Madden as the protection officer who slept with Home Secretary Keeley Hawes, was hugely enjoyable, but in a pantomime kind of way.

The Informer, on the other hand, is thrilling, authentic, dark and firmly rooted in its East London world. It stars Nabhaan Rizwan as Raza Shah, a warehouse worker recruited as an informer by counter-terrorism officers from the Metropolitan Police. My worries that writers Rory Haines and Sohrab Noshirvani’s thriller would present the cops as state-sponsored assassins, while Islamic State were merely misunderstood youths, were unfounded.

Instead, their complex view of this shadowy world is both gripping and believable. In addition, limpid-eyed Rizwan — in his first role — is a gifted actor with a charisma that burns off the screen. The boxset is still on BBC iPlayer. Don’t miss it!