We had an amazing marriage for more than 20 years. We adored each other. And now, it’s very, very strange having to sit opposite him when he says: “You’re a very nice woman, but I don’t remember you.” ’

Jan Ravens — 62, TV and radio comedian and mother-of-three — is sitting in her bright London home talking for the first time about the devastating illness that ultimately ended her relationship with the father of her youngest son.

It’s taken five years of grief and transition to get to the point where she now feels able to talk about it.

It was January 2015 when her husband Max Hole, a hugely successful music executive, phoned her from a business trip to India. ‘He said: “I’ve got this awful headache, I’m feeling terrible. Thank goodness I’m coming home tomorrow.” ’

Actress Jan Ravens, revealed how her marriage came to an end when her husband Max Hole (pictured) developed encephalitis

Jan was at a spa, recuperating from the death of her mother. ‘She died the previous month. She’d had dementia for three years.’ Jan wanted to rush back to see Max. ‘But he said: “Don’t do that, you need this time for yourself.” ’

Instead, Max went to see his GP and was tested for malaria, but the symptoms worsened. A day later, Jan got a call from his son Jamie saying Max really wasn’t well.

She returned to find Max in bed with the duvet over him, the heating on, still shivering but mostly asleep. His temperature was raging.

‘I opened the window and put cool flannels on him, trying to get the temperature down.’ He was feverish and incoherent. I remember thinking: “He’s got flu, he’s talking nonsense.” It seemed quite funny.”

‘I even made a tape, planning to play it to him when he got better. I thought: “Oh how we’ll laugh,” and of course I never played it to him. And I’ve certainly never listened to it,’ she says, her voice cracking with emotion. ‘You don’t ever imagine that something is going to be so tragically life-changing.’

By morning his temperature had come down, but he was still making no sense. ‘We got an appointment with a neurologist, who took him straight into hospital.’

He was given a lumbar puncture and diagnosed with encephalitis, then put into a coma to save his life.

‘If I’d been aware of the symptoms, I’d have known something was very wrong. It’s that terrible thing of wishing you could be like Superman and turn the world backwards,’ she says poignantly. 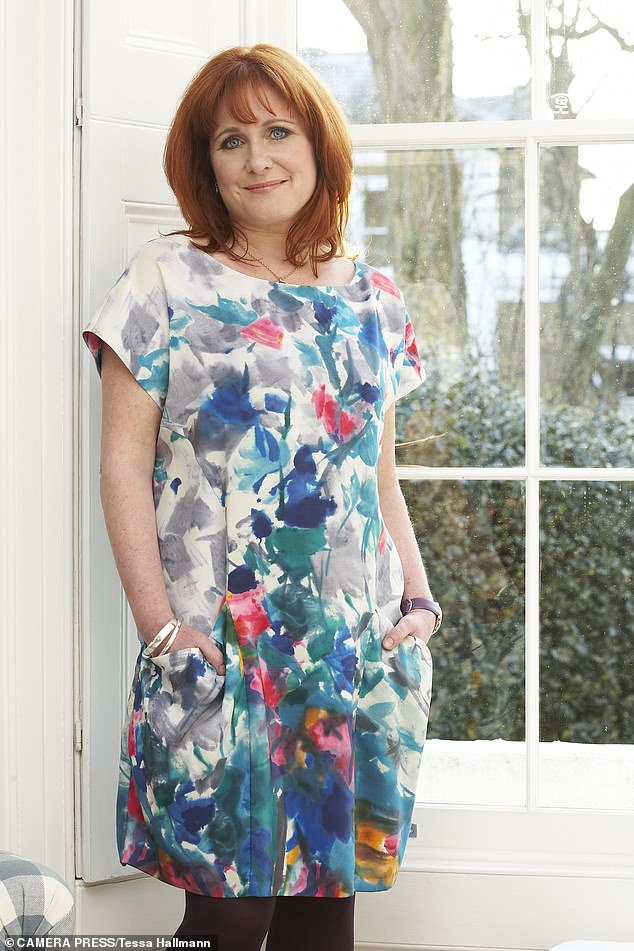 Jan (pictured) explained that Max has had to learn to walk and talk again, in addition to having devastating memory loss

She’s respectful of Max’s dignity — and the close bond he has with his sons. But she’s agreed to tell her story in the hope that more people will recognise the symptoms of encephalitis. ‘It’s one of those things that if you catch early, you can limit the damage.’

Encephalitis can occur at any age, in any part of the world and is caused either by infection, usually viral, or by autoimmune diseases. Subsequently, many survivors are left with an acquired brain injury, the degree and severity of which will vary.

There are 6,000 new cases of encephalitis in the UK each year, and scientists are now researching links with Covid-19, which can cause encephalitis in patients with neurological complications.

Max, then 64, did pull through. He had to learn to walk and talk again, but there was also devastating memory loss.

‘At first he didn’t believe I was his wife, but as he got better he accepted that I was because there were all these wedding and holiday photos of us in the house. So for the first year or so, he’d say: “What would I do without you, you’re my darling.” But in February the following year we went to LA to meet his associates in the music business, and I think it was then he realised he wasn’t on top of his game any more. That this was the best he was going to get.

‘He started retreating into himself. It became clear after this trip that he wanted to spend a lot of time on his own. He would watch repeats of old sports programmes. I’d ask him to join me for supper and he’d want to stay in his room.’ 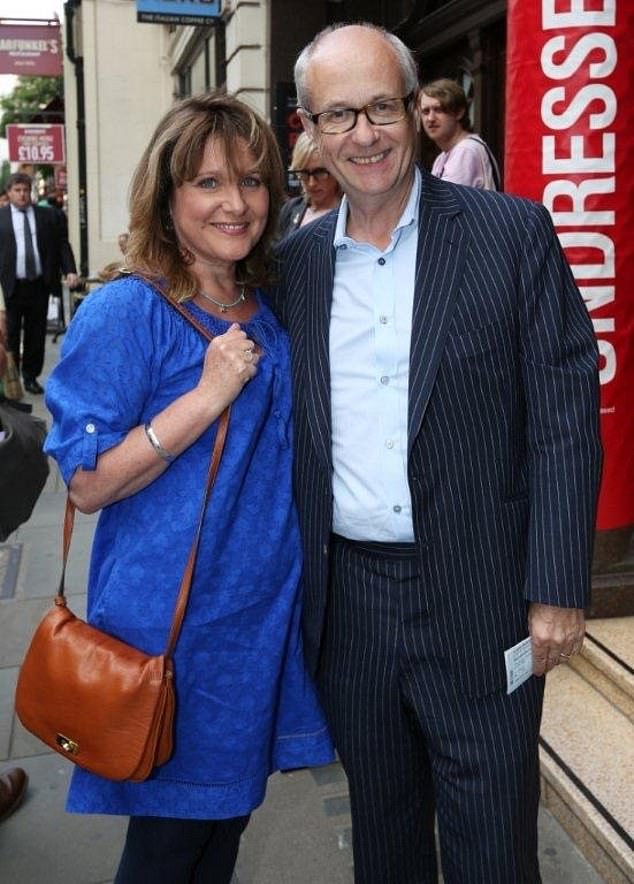 Jan made a decision to separate from Max in 2017, he had no recollection of their relationship despite having had two years of rehab

One night, out with friends, Jan burst into tears. ‘My friend was saying: ‘Oh Max, poor Jan, give her a hug.” And Max just sat there.

‘Later at home, I said: “Can’t you even give me a hug?” And he said: “Look, I don’t know you. I don’t love you.” And that was when I knew it couldn’t go on. Obviously I had known our life was diminished and changed, but I was there for him. I would never have abandoned him.

‘After two years of rehab, he admitted he had no recollection of our relationship and felt no connection with me.’

So, in 2017, Jan made the heartbreaking decision to separate. ‘I knew the intimacy that you have in that kind of relationship — the shared language, the landscape, was gone.’

It was a truly happy marriage, she stresses. Friends called them a ‘golden couple’. Only severe illness could have shattered it.

Max and Jan first met in the early 1990s when The Who’s Pete Townshend introduced them. Jan was appearing in a musical written by Townshend; Max was a music executive who has worked with Simply Red, Matt Bianco and Sting and co-founded the Bristol Proms. He later became head of Universal Music Group and was instrumental in bringing the hit show The Voice to British screens. 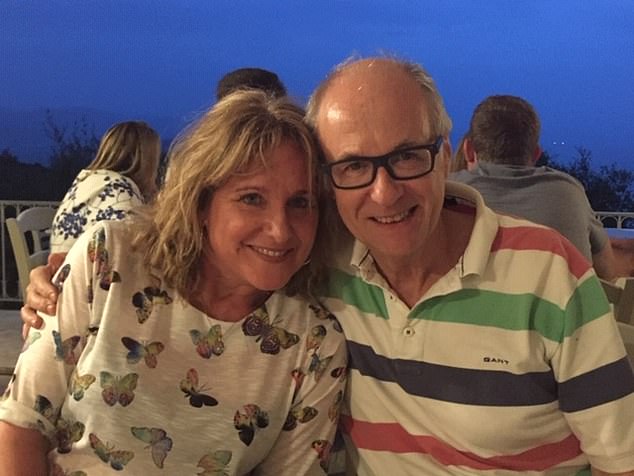 Jan and Max (pictured) who married in 1999, had a blissful relationship for 20 years as they shared a love of art and music

‘He was king of the world,’ Jan recalls. ‘He was incredibly well-loved. He was a good guy, brilliant at business but not a shark.’

Both had been through a divorce. Jan’s first marriage to composer, Steve Brown, father of her two elder sons, Alfie, a comedian, 33, and Lenny, 29, a bass player, had ended when they were six and three. Max had two older sons from his first marriage who lived with his ex-wife.

Charming and intelligent, Max was patient with Jan’s two young boys who weren’t sure if they wanted a new stepfather. ‘Alfie would thump poor Max in the stomach, muttering, “You’re not my dad”, and Lenny would say, “The bald guy is here again”. But Max was very tolerant of my boys kicking off.’

They married in 1999. For their honeymoon, she and Max spent half of it alone at the fancy Cipriani hotel in Venice and the second half together with their one-year-old son Louis in Cornwall. They shared a love of art and music and were blissfully happy for 20 years.

Arguably Jan’s career went slightly on the back burner as she supported Max’s job. She had enjoyed a meteoric rise from Cambridge, where she was the first female president of the Footlights Club in 1979, winning the first Perrier Award for directing the Footlights revue starring Emma Thompson, Stephen Fry, Hugh Laurie and Tony Slattery. After graduating, she, Sandi Toksvig and Brigid Larmour, started their own theatre company called Flying Ducks. 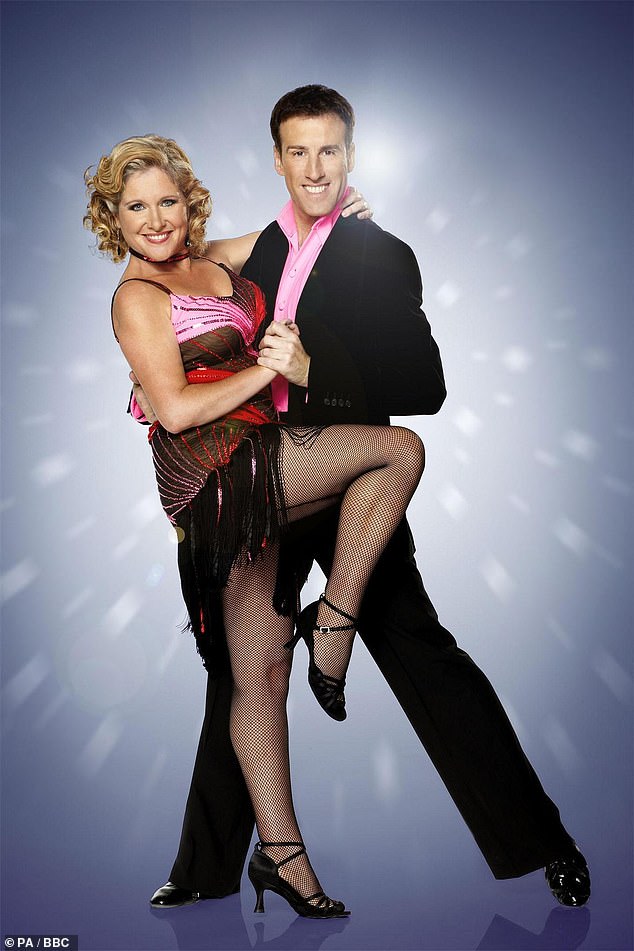 Jan explained that she can still see Max, but he doesn’t remember her. Pictured: Jan with Anton Du Beke on Strictly in 2006

She became a comedy producer at BBC Radio, then left to become a performer, appearing in Spitting Image and Dead Ringers, as well as theatre roles at the RSC and Chichester. She won Celebrity Mastermind in 2008 and danced with Anton Du Beke on Strictly Come Dancing in 2006.

But when her life changed dramatically, she had to become a different person. ‘When Max was ill, I thought: “My life is in chaos. What can I do?” And the thing I could establish some control over was my work.

‘At the same time, Theresa May had become prime minister, there was Hillary Clinton and Nicola Sturgeon — all these women were in influential positions, so I decided to write a one-woman show, Difficult Woman, for the Edinburgh Festival. It was about being a woman of a certain age and I did impressions of all these characters.

‘The show was a huge thing for me and I possibly wouldn’t have done that if I had still been Mrs Rock ’n’ Roll corporate wife.’

Today, Max lives nearby in Chiswick, West London, and is largely recovered. He is still an important member of the family and comes to social gatherings at Jan’s house, as well as joining them on walks. He can remember his sons — Louis, and Jamie and Mark, his two boys from his first marriage. He is a devoted and caring father but he simply has no recollection of their relationship.

‘I still see Max,’ Jan says softly. ‘But he doesn’t remember me. So it’s weird because I see a version of the man I knew. But he’s not the man he was.’

She dealt with her mother’s dementia in the past, but this is different. ‘Max knows his life has changed. He is aware he’s lost his memory and will often make very bleak jokes about it. Obviously he’s got three kids and he doesn’t really remember all the events of their lives, but your relationship with your child is so visceral, and also your duty is clear. 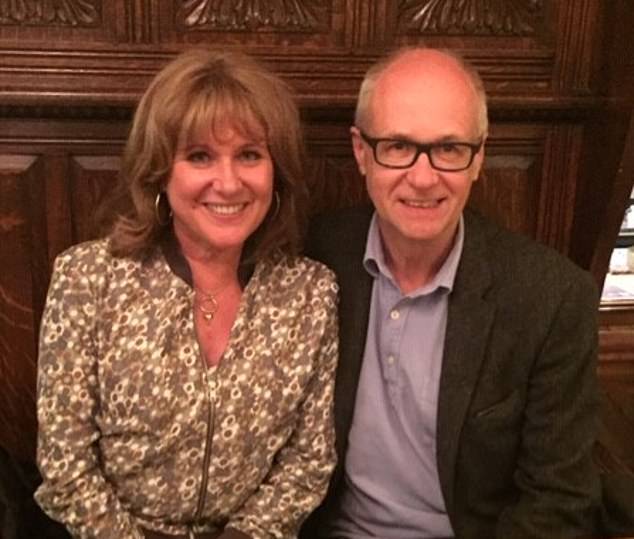 Jan who has had a relationship since Max (pictured), revealed it’s made her hopeful that there’s the possibility of happiness

‘Max was always a very conscientious, thoughtful and generous father and he continues to be that. He’s supporting our son Louis, who is now at university. He’s very aware of what his role is. Because that’s quite simple. Whereas with me, he’s supposed to have this feeling for me …’ For a moment, her voice falters.

She has had a relationship since. ‘Many aspects of it were lovely. It didn’t work out, but it does make me hopeful that there’s the possibility of happiness — with someone new or not.’ And she hopes to resume her roles in the stage version of Alan Bennett’s Talking Heads at Watford Palace Theatre (lockdown ended the run).

Jan is still very close to Max’s sons. She has succeeded in creating a very modern blended family.

‘On Christmas Eve, we had me, Max, my ex Steve, his wife and our two sons; plus Jamie and Mark my two stepsons; and Louis, who is the child Max and I had together.

‘Max’s son Jamie brought his wife and new baby — I’m now a step-grandma — and his wife’s sister and husband and two children, who were playing with my son Alfie’s two children. Alfie’s girlfriend, Jessie, also came with all her family.

‘The fact that you can celebrate family like that, and have all these new branches, with the children playing together, was just lovely.

‘In the end, it’s about being kind and honourable to each other, isn’t it? To paraphrase what Robin Williams says at the end of Mrs Doubtfire: “It’s not the shape of your family, it’s the love that’s there that counts.” ’

For more information, contact the Encephalitis Society at encephalitis.info.