JANE ALEXANDER discovered the agony of living alone after 23 years

As I close the door behind me my heart starts thudding. My hands shake as I turn the key, carefully double-checking the front door is locked. The bare floorboards creak as I walk down the narrow hallway, but otherwise the house is silent, almost eerily quiet.

It’s the first night in my new home and I am surprised and shocked at how wobbly I feel.

I’d been desperate to have my own place for years. However, like one in six estranged couples in the UK, my husband Adrian and I had been forced to stay living together after our split due to financial constraints.

Now, finally, three years after we decided to separate, following 25 years of living as a couple (23 of them married), I had a place to call my own — a terraced house in Exeter.

Jane Alexander found herself living alone after 25 years of living as a couple (23 of them married) after deciding to separate from her husband Adrian (pictured: Jane at her home in Exeter, Devon)

I should have been overjoyed but, as my moving-in date approached, I found myself increasingly anxious about the thought of living alone.

My son James, 19, had left for university last October, so I was not only a middle-aged singleton, but an empty-nester, too.

Adrian travelled a lot for his work as a journalist, so I was used to being without his company, but I hadn’t officially lived on my own for nearly 30 years.

The last time I had my own home, my life was wildly different. I was in my 20s, working in a busy newspaper office in London, with a wide and supportive network of friends and family close by.

Now I’m in my late 50s, freelancing from home in Exeter. My parents died several years ago, and my friends and remaining family are scattered all over the world. I’m far more isolated — and far, far older.

I’m not the only one launching into mid-life aloneness, not by a long shot. Figures from the Office for National Statistics show nearly a third of households of people aged 45 to 64 are living solo.

Divorce in general is increasing, but it’s the over-50s who are leading the separation stakes. Almost a quarter of the 107,000 divorces recorded in 2016 involved women over 50 — the ‘silver splitters’.

That first night, I lie in bed — any notion of sleep dancing a million miles away. Little noises make me jump: the grumble in the radiator as the boiler switches off; the wheeze of a floorboard as it eases back into place; a motorbike revving in the street. I don’t nod off until dawn. 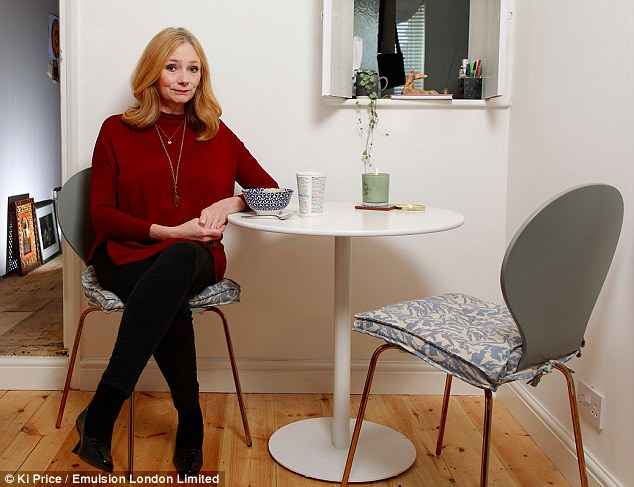 The last time Jane had her own home, her life was wildly different. She was in her 20s, working in a busy newspaper office in London, and had a wide and supportive network of friends and family close by

When it isn’t outside distractions, it’s my thoughts playing hooligans in my head. Will I be able to pay the bills? Will the ancient boiler last another year? How can I fix the damp in the kitchen? Is my son OK at university?

All those worries that are shared in a marriage shout louder when you’re facing them on your own.

I also feel vulnerable for the first time. I’m not the type who scares easily — I’ve lived in big old spooky houses, in extremely isolated rural spots, in tough London neighbourhoods — none of them worried me.

Yet one night I’m woken by a thud from downstairs. Then sounds of movement. My heart pounds as I edge my way downstairs, turning on all the lights.

‘Who’s there?’ I yell, hoping any would-be burglars would scarper. I hear scrabbling and then another crashing thud. Realisation dawns. A cat had obviously muscled its way in through the old cat flap and then panicked its way out. I heave a sigh of relief.

Adrian and I share custody of our dog, Dan, and I immediately decide I need him as a sidekick for back-up on a more regular basis. A barking dog is a good deterrent — for cats and burglars.

Changing lightbulbs, putting out the rubbish, taking the dog to the vet. There are so many things that don’t even cross your mind when you’re a couple.

You fall into the habit of sharing tasks; you let someone else take charge of chunks of your life. I realise that, over the years of our marriage, Adrian had taken over most of the practical side of our shared life — paying bills, sorting out insurance, getting cars serviced.

Her husband Adrian did all the cooking at home and now she’s lost her cooking mojo entirely. She added: ‘I’m aware of silence, too, in a way that’s new. When I lived with Adrian, everything seemed so noisy’

I look at my pristine new cooker and opt for plonking a piece of toast in the toaster. Doubtless I’ll plump for another ready-made salad from the supermarket for lunch.

Adrian did all the cooking in our home (he’s passionate about it) and I’ve lost my cooking mojo entirely.

Now, as I try — and fail — to twist off the lid from the marmalade jar, I suddenly feel deeply pathetic.

When it comes to the house itself, I realise I’m even more helpless.

The Victorian terrace I fell in love with hadn’t been touched since the Seventies and, while I was game for stripping wallpaper and sanding floors, I couldn’t turn my hand to plastering and replacing pipes.

Fortunately, I lucked out with my builder. He not only pulled off a pretty extensive renovation on an extremely tight budget, he has also given me the confidence to do things for myself.

‘There’s a video for everything on YouTube, you know,’ he says.

I sit on the floor staring at a tube of caulk (the stuff you use to fill gaps; something I didn’t know until recently) and an application gun. How on earth do you even get the tube in the gun? I check on YouTube and, sure enough, there’s a ‘how to . ..’ video.

1 Join local groups to meet people with similar interests (meetup.com is good) or who live in your neck of the woods (nextdoor.co.uk).

2 Get to know your neighbours. You don’t have to be best friends, but it’s good to have their details in case of emergencies.

3 Consider a pet if your circumstances allow. If not, maybe join BorrowMyDoggy (borrowmydoggy.com) for a part-time step-pet.

4 Redecorate your home to make it your own. Even a quick coat of paint will freshen up the place and provide a brighter backdrop.

5 Invest in the right level of security. Ensure all doors and windows have good-quality locks. An alarm system gives further reassurance.

Your local police can give advice. Sign up for their Alert two-way community messaging system (neighbour hoodalert.co.uk). Also join your Neighbourhood Watch (ourwatch.org.uk)

6 Get rid of anything that brings back bad memories or ties you to the past in a negative way.

7 Background music can make a home feel welcoming — and take the edge off the silence.

I hire a big sander for the floors and, yes, there are any number of videos for that, too.

It’s easy to become lazy in a relationship, I realise. And it’s easy to fall into the ridiculous idea that there are ‘man’ jobs and ‘woman’ jobs. I’m ashamed of my old self.

Nonetheless, my physical shortcomings still frustrate me. I pinch a nerve sanding the floors. I nearly pitch off a ladder as I try to fix a light. I actually sob with frustration as I battle to move furniture on my own. I even manage to trap myself in my own bedroom when the door jams.

When I last lived alone, I lugged mattresses and even sofas up and down stairs on my own. Now, aged 58, and with a dodgy shoulder, I can barely wrangle a duvet.

It’s not just physical, of course. My friend Denise, who was widowed a few years back, warns me about the loneliness. ‘You need to throw yourself into things,’ she says. ‘Join everything. Don’t turn down a single invitation,’ she says.

I don’t feel ready for that. Not yet. I need some time and space to adjust to being on my own.

I go to bed earlier and earlier. Every time I try to sit and read a book, I find I can’t relax — I keep jumping up to fix something. My home has never been cleaner.

I’m aware of silence, too, in a way that’s new. When I lived with Adrian, everything seemed so noisy. His music crashed through the space and, bless him, he kept up a running commentary, a pretty much non-stop stream of consciousness, whether in front of the TV, driving the car or pottering around the kitchen. I was longing for peace.

Now, however, I can see why my mother used to play the radio when my father died — the house sometimes seems too quiet, as if it’s listening to me. My own thoughts are way too loud. It’s a period of readjustment, I realise. When you live with someone for 25 years, you can lose track of your identity.

All relationships involve compromise and I wonder if I compromised too much, if I lost sight of who I am. To be honest, I’m not even entirely sure what I like any more. I start questioning everything — from the food I buy, through the work I do, to the way I spend my weekends.

I paint my entire house white — a blank canvas that I hope will give me the clarity I need. I clear out books I no longer read, the furniture and knick-knacks that no longer feel right. I cancel my gym membership (I haven’t been for months).

Maybe I need to find a new hobby? Volunteer for a local charity? Check out adult learning classes? My son calls to talk about the societies he’s joined at university, the people he’s met, and I feel like a Fresher myself.

There’s a whole new world out there and I need to figure out what I’m going to do with it; who I’m going to be in it.

Right now I’m taking things slowly, testing the water. I have joined my local Meetup group (that puts you in touch with local activities) and Nextdoor (that connects you with your neighbourhood), but I’m holding fire on committing to anything.

I sit in my living room, sipping a glass of wine (do I even like wine?), wondering what happens next. My new home is a work in progress and so, it seems, am I.