JANE FRYER meets Tom Moore, the war veteran who has raised £9million (and counting!) for the NHS

Some people climb Mount Everest to raise money for charity. Others run a ­marathon, jump out of a plane, swim the Channel, or do all four.

They train for months, make a huge song and dance about it, buy heaps of expensive kit and stretchy Lycra clothing and, invariably, test the patience of their nearest and dearest.

His target? One hundred laps of his front garden in Bedfordshire, before he turns 100 on April 30.

He thought it would make a nice change from the running machine – kept on a surprisingly challenging incline – that he keeps in his sun-drenched, book-filled sitting room. How nice to be able to enjoy the warm spring air and birdsong as he pushed his trusty walking frame up and down.

Even better, he hoped he might raise a little bit of money for the NHS while he was at it.

And so, just over a week ago, with the help of his younger daughter Hannah, he opened a Just Giving account, Tom’s 100th Birthday Walk for the NHS, set his target at a ‘rather optimistic’ £1,000, put on a pair of supportive shoes, his best blazer, old regimental tie and a slew of army medals, and set off across the garden.

He motored past his original target in a couple of days and then, well, as he explains, things rather took off.

He’s not exaggerating. In the two and a half hours it took me to drive from my home to meet him in his garden yesterday and get home again, the money raised had jumped by more than £2million. An hour or so later it was up another million.

By the time the Mail went to press Wednesday evening, nearly 500,000 givers had donated £9.5million.

And it’s all going to the NHS Charities Together which gives support for frontline workers. 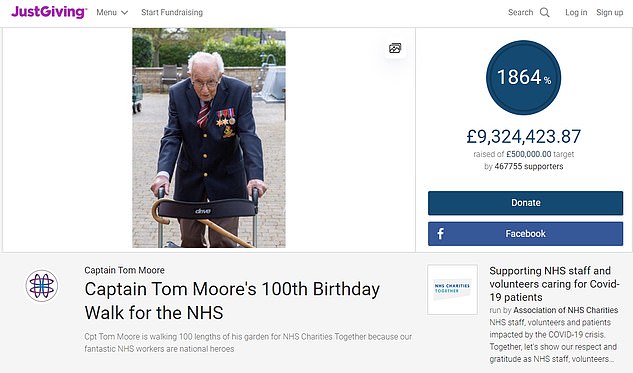 By the time the Mail went to press Wednesday evening, nearly 500,000 givers had donated £9.5million

‘The response has been miraculous,’ he says, shaking his head and looking utterly delighted – and a good 20 years younger than he is. ‘It’s been a bit of a surprise and I am so grateful that everyone seems to want to support.’

Indeed. He’s has been on the news, on the radio, and on Good Morning Britain with Piers Morgan – who was so impressed that on Monday he pledged £10,000 of his own money (‘He’s great, isn’t he?’ says Captain Tom) and yesterday started a campaign for him to be knighted.

It seems everyone – from Carrie Symonds to the singer Jason Donovan – has embraced his vision. One woman on Twitter suggested naming an NHS hospital The Captain Tom Moore. 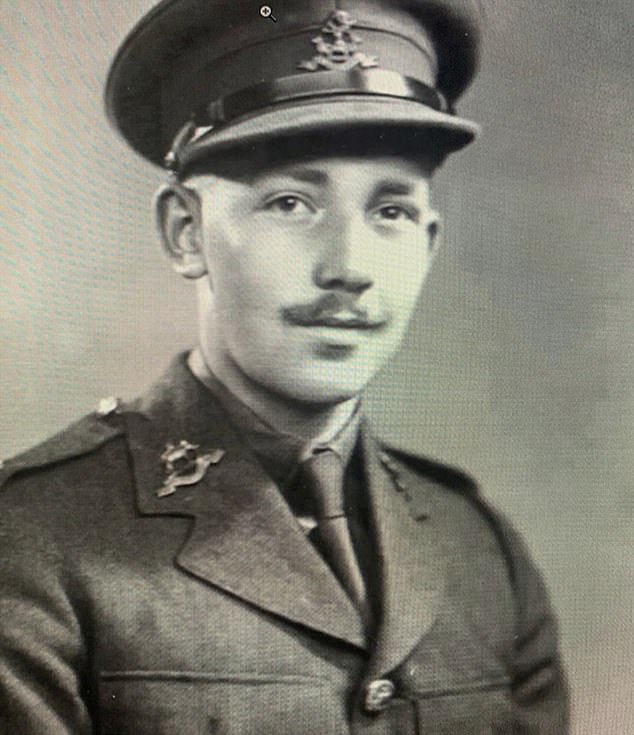 He was posted to India where he fought in the Arakan Campaign of 1942-3, when the Allies pushed back against the Japanese in Burma

Tom, meanwhile, has risen to the challenge, embraced the fuss and enjoyed every minute of it. Of course he has. Because he may be days from his 100th birthday – obviously, his party has been cancelled – but Captain Tom (as everyone calls him) is sharp, witty, wry, extremely chatty, utterly on the ball and is barely feeling the effects of all his extra exercise.

‘My hip sometimes tells me it’s there, but that’s just tough,’ he says. ‘I’m doing something I enjoy doing and the end result is even better, isn’t it?’

While he talks – about the run-down motorbike he bought for half a crown and did up when he just 12, his officer training and Army service in India, and falling for his beloved late wife Pamela (‘she was slim and she was attractive and I just loved her’) – Hannah’s mobile and the house phone are ringing like crazy with requests for interviews from all over the world. 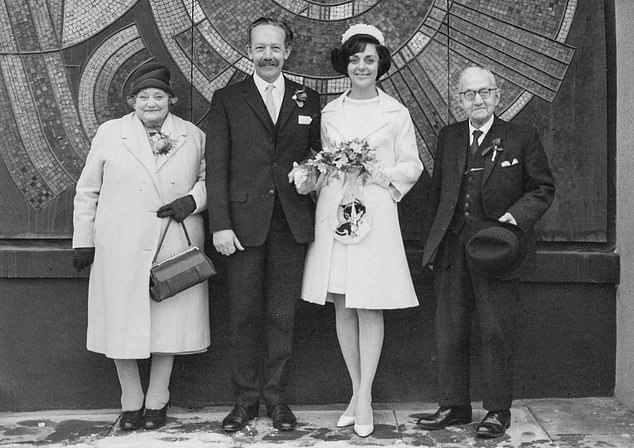 They married in 1968 and two daughters, Lucy and Hannah, soon followed. ‘It was a very happy time,’ he says

And the total keeps going up… and up.

Thomas Moore was born in Keighley, West Yorkshire. His mother was a head teacher, his father was in the building trade and he went to the local grammar school and then on to train as a civil engineer. ‘I was always a very practical boy,’ he says.

‘The sort of toys I liked would be a piece of wood, some nails and a hammer – that would keep me very happy – and I learnt very quickly that if you hit your fingers, you didn’t do it again.’

He was conscripted into the Army when he was 20, along with – as he likes to put it – his role model, the Queen.

‘She and I were in her father’s army together – she was a subaltern,’ he says. Captain Tom loves the Queen. ‘She is fantastic and so strong and sensible and her heart is in the right place,’ he says. ‘I don’t think anybody anywhere has had a queen like we’ve got. We’re very lucky.’

He, meanwhile, joined the 145th Regiment Royal Armoured Corps, was selected for officer training in 1940 and rose to the rank of captain.

He was posted to India where he fought in the Arakan Campaign of 1942-3, when the Allies pushed back against the Japanese in Burma. His late sister, Freda, was also conscripted and joined the ATS in Lincolnshire, plotting the German planes as they came over.

It wasn’t until the late Sixties, after a stint in the Armoured Fighting Vehicle School followed by a move into sales, and when he’d all but given up hope of ever settling down and having a family, that he met Pamela. 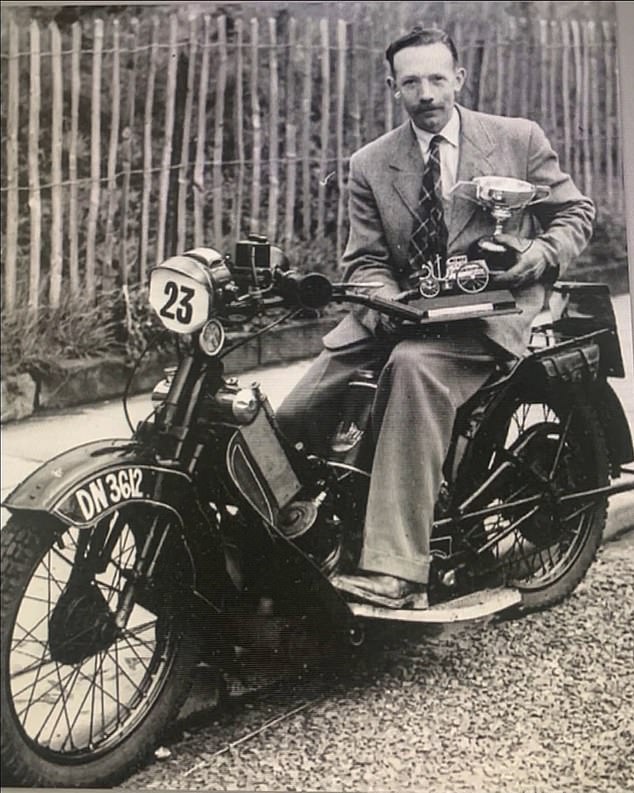 He had a battle with skin cancer a while ago and, a couple of years back, had a fall in the kitchen in which he broke his hip and gashed his head

He was living in Yorkshire and working as sales manager for a roofing materials company. Pamela was employed at the company’s headquarters in Gravesend, Kent.

‘As it so happened, the office manager in Gravesend was a rather attractive young lady – she looked terrific to me, like a model – so I had to do various trips and, shall we say, the ­attraction with the office manager became stronger and I eventually married her,’ he says, suddenly turning a bit pink in the cheeks.

Pamela loved nothing more than a trip to Marks & Spencer. ‘That was her dream day out, so we did that a lot,’ he says. ­Meanwhile, Tom loved to tinker with motorbikes, take engines to pieces and fantasise about his dream car.

‘Not a high-speed Ferrari, or the like, but a four-wheel drive to get me through the muddy parts of life.’ Eventually, after working hard – ‘I always liked the idea of money and I was ambitious, moving up from job to job’ – and dabbling in property in Spain, he retired aged 72. But he was never the sort to loll about doing the crossword or pottering in the garden. ‘My father was a keen gardener but, to me, everything takes so long,’ he says. ‘If you put seeds in, its no good standing back and waiting – it takes such a long time. I don’t have the patience for that.’ 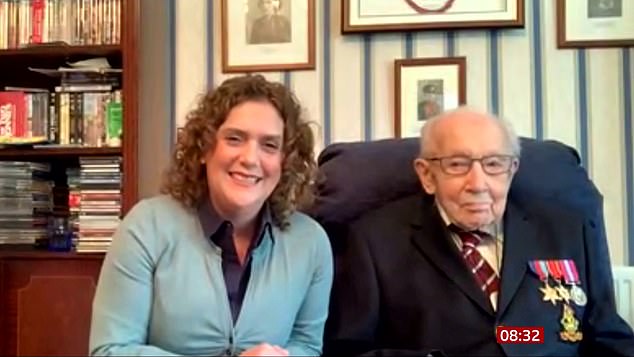 For the past 12 years, he’s been living with daughter Hannah, her husband Colin and their children, Georgia and Benjie, in the village of Marston Moretaine in Bedfordshire

So he pressed on with his engines and motorbikes and, when Pamela fell ill 20 years ago, cared for her at home for the first two years and then visited her every single day in a home for the last four, feeding her lunch and just sitting with her.

‘It was her brain that quietly died,’ he says.

For the past 12 years, he’s been living with daughter Hannah, her husband Colin and their children, Georgia and Benjie, in the village of Marston Moretaine in Bedfordshire.

But he has remained relentlessly independent.

So it’s 99-year-old Captain Tom who lets the dogs out when he rises, at 6.30am sharp, for his morning porridge.

He prepares all his meals, today mostly soft food because of a problem with his throat – ‘I dream of steak and chips, oh yes please!’ – enjoys a daily whizz on his running machine, treats himself to an occasional glass of sweet wine in the evening, loves the news and watching Judge Judy on television and has no truck with afternoon naps.

‘Though I do find that, being old, I sit in my chair and find that the programme on the television has suddenly changed!’ he laughs.

There has, though, been the odd hiccup along the way.

He had a battle with skin cancer a while ago and, a couple of years back, had a fall in the kitchen in which he broke his hip and gashed his head.

‘I tangled up my own feet and fell over and hit my head on the dishwasher,’ he says.

‘It still has a little dent!’ But thanks to the NHS, he soon bounced back into his smart navy blazer and slacks and he will always be grateful.

‘They’re wonderful. Amazing. They’ve seen me through and cared for Pamela. I just wanted to thank them.’ Well he’s done that, many times over.

There is something very special about Captain Tom. Not just his modesty, stoicism and dry humour, but also his optimism – even in the current crisis.

‘I think generally people are doing very well,’ he says. ‘Of course some people are apprehensive about what might happen to them, but you have to look on the bright side and think, “It won’t be me”.’

That is certainly his view.

Because although he’ll complete his 100 laps Thursday, he has no intention of stopping any time soon.

‘I’m going to keep going – to my birthday and beyond,’ he says firmly. ‘As long as people are still giving money, I’ll keep walking.’

You can donate to Tom’s magnificent charity campaign by going to justgiving.com/fundraising/tomswalkforthenhs