He lovingly adjusts their hanging positions, checks their length and girth, strokes their skins, admires their straightness and clips a leaf here, a stalk there.

He is 50 years old and, other than the occasional foray into tomatoes, has been a cucumber farmer for 40 years — he grew up on a cucumber farm in Holland where his father produced a million every year.

Here at Thanet Earth, in north Kent, he grows 15 million annually. He has never contemplated doing anything else. ‘You don’t just decide, aged 30, that you will be a cucumber grower,’ he says. ‘It’s a mindset. It’s in you. A part of your being.’

Softly spoken Arjan is not, if I’m honest, the sort of person I expected to meet at the UK’s biggest greenhouse — an extraordinarily high-tech, futuristic ‘farm’ stretching over 95 hectares that produces, 400 million tomatoes and up to 750,000 peppers a week, as well as Arjan’s cucumbers — all for the UK market.

Even before the £135million facility opened in 2009, its scale, market dominance and ‘futuristic’ hydroponic (using mineral nutrient solutions in a water solvent to grow produce) growing methods had aroused strong feelings.

People referred to it as a vegetable laboratory, or a super-sized plant factory.

But this week, two retail gurus — former Sainsbury’s CEO Justin King and Lord Rose, former executive chairman of M&S and current chairman of Ocado Online — wondered if, come October 31 and in the event of a No Deal Brexit and a log-jammed border, Thanet Earth, which produces 22 per cent of all cucumbers grown in the UK and about a tenth of our tomatoes and peppers, could be the future of British farming. 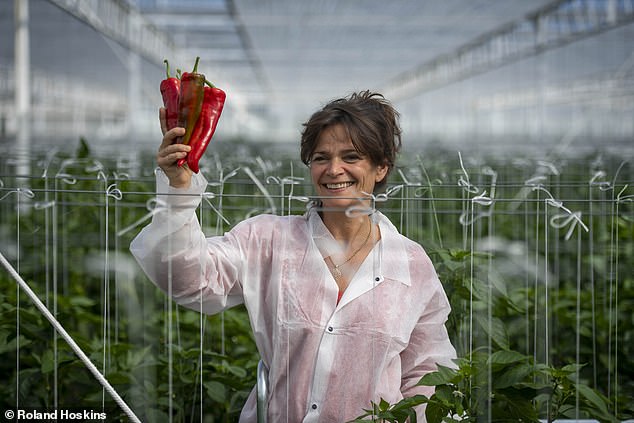 The UK’s biggest greenhouse — an extraordinarily high-tech, futuristic ‘farm’ stretching over 95 hectares that produces, 400 million tomatoes and up to 750,000 peppers a week

Certainly, the scale is astonishing. Signs for Thanet Earth — a joint venture between the Fresca Group (a conglomerate of fruit and veg producers) and three Dutch growers — start miles away on the A299 but seem unnecessary given the six glasshouses on the horizon,

Each has a footprint equivalent to London Heathrow’s Terminal 5, its own reservoir to store rainwater (the facility is 80 per cent self-sufficient in water and has its own power station that feeds into the National Grid) its own staff, complex computer system and sanitation system.

Before you can go in hands must be blasted in disinfectant, shoes polished by rotating brushes and a get-up of blue plastic gloves, white coat and plastic bag wellies, donned. We start with one of the tomato houses.

It covers 20 acres — the equivalent of about 20 football pitches — and holds over 450,000 plants, suspended in rows from the 26ft ceiling. Each 30 to 40ft-long plant is festooned with perfect sprays of Piccolo cherry tomatoes.

‘We have very few wonky vegetables,’ says Robert James, Technical Director. ‘No farm will set out to grow wonky food and we are about 99 per cent perfect.’

Of course they are! Every aspect of the growing is monitored, planned and calculated. Nothing is left to chance.

So forget soil, for starters.

This lot live on raised troughs in blocks of rock wool — a material derived from basalt that looks like loft lagging — into which water, potassium, nitrogen, calcium, iron and magnesium, are all drip-fed. Humidity and irrigation are measured and adjusted weekly by computer.

‘But the decisions are all made by human computers,’ insists managing director Pleun van Malkenhorst. ‘It is all down to the grower to decide — so it’s like a very good Formula One car — you still need a good driver.’ 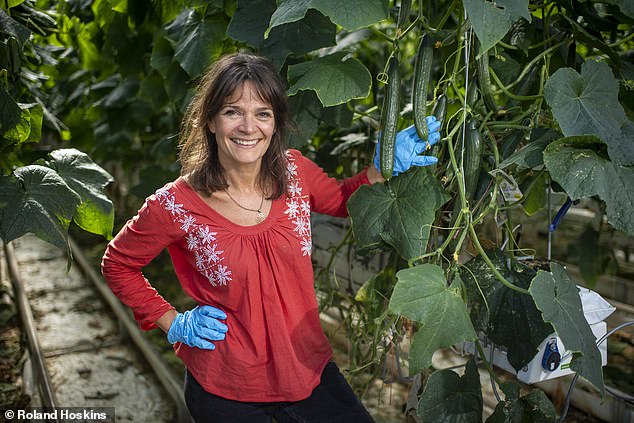 In the event of a No Deal Brexit and a log-jammed border, Thanet Earth, which produces 22 per cent of all cucumbers grown in the UK and about a tenth of our tomatoes and peppers, could be the future of British farming

On top of that, the crops are constantly scouted for problems and all picking — and tasting — is done by humans.

Pleun insists this is still very much farming, just more technical — and in times of increasingly unpredictable climate extremes — more reliable than most.

So the ambient temperature — a steamy 27c — is controlled and guided by a weather detection system on the roof that measures outside temperature, wind speed and intensity of sunlight and then tweaks the vents and blinds accordingly, to make life one long hot summer day in the Garden of England.

Even wildlife is controlled and monitored. A colony of worker bees is introduced into the complex to pollinate plants. All leaves are left where they fall to encourage the beneficial insects.

When there are occasional problems with caterpillars, aphids and spider mites, the team introduces their own insect predators to control the outbreak.

But key to everything, is light. Light produces the precious joules, or light energy, that the plant converts to plant energy to grow leaves and fruit.

‘One per cent more light gives one per cent more production,’ says Robert James. Almost every aspect of design is about optimising light. The complex is built here in a deprived area of north-eastern Kent with high unemployment and social housing, because the area has the best natural light in the country.

The glass has a low iron content to maximise its translucency. Support bars and trusses are as slim as possible. The ground is covered in white plastic to reflect and maximise light which means that, on a sunny August day, it’s like being on South Beach in Miami.

In the winter (while cucumbers and peppers are still seasonal, tomatoes are grown year-round), high–pressure sodium lamps supplement the natural light for 17 hours a day.

Plants need a rest to better distribute the glucose and other benefits of photosynthesis, so they’re cast into darkness between four and 11pm, but the temperature remains tropical.

Ten years on, the company — a huge local employer and benefactor — has been embraced for its green credentials and education programmes and employs some of the most passionate people I have met. 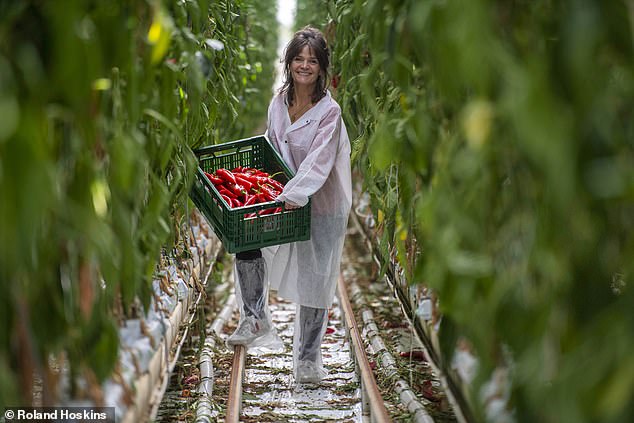 It covers 20 acres — the equivalent of about 20 football pitches — and holds over 450,000 plants, suspended in rows from the 26ft ceiling

But it isn’t for everyone.

‘Some people don’t like the idea of anything being farmed at scale,’ admits Pleun. ‘But, ultimately, if you want to feed 60 million people, this is the way forward.’

Even so, because the UK imports so much veg — more than 30,000 tons each of onions, tomatoes and apples every month, even in peak growing season — Thanet’s volumes, while immense, are still nowhere near what would be necessary for Britain to be self-sufficient, even in these three vegetables.

Judy Whittaker, communications manager for Fresca Group, points out Thanet might be Britain’s biggest producer but they account for just two per cent of tomatoes, 5.5 per cent of cucumbers and one per cent of peppers eaten in the UK.

‘It would take a £4.6 billion investment to build 32 facilities the size of Thanet to be anywhere near self-sufficient,’ she says.

‘And even if we could find anywhere to put them, why on earth would you grow cucumbers here in the winter at vast expense when you could buy them at a fraction of the cost from Spain?’

But perhaps the more important question is what do Thanet’s ‘laboratory’ veg taste like?

Frankly, we all know — we’ve been buying them for years. Thanet supplies every major supermarket — bar Waitrose and Asda — in every range from Sainsbury’s ‘Taste the Difference’ to Tesco’s ‘Finest’.

But I happily work through the samples and find that Piccolo tomatoes on the vine smell and taste of proper old-fashioned tomatoes (though according to Judy it is the hairs on the vine that smell, never the tomatoes), the cucumbers are well, just cucumbers — sorry Arjan — and the peppers gleam and crunch and really do taste of summer sunshine.