JANE FRYER: Today Beefeaters face a threat to their survival and are not going down without fight

Deep inside the Tower of London — over the moat, past thick stone walls and under a vast coat of arms — lives a small, tight-knit community made up of 45 families, almost as many pets, a doctor, a chaplain and 37 dashingly dressed yeoman warders, or Beefeaters.

They live in apartments in the Tower’s former hospital, high-ceilinged homes in what was once a school and lopsided rooms in some of the site’s 13 towers.

They exercise their dogs in the (dry) moat, where they share tips for laundering their ceremonial garb and marvel at daft questions from tourists — a favourite is: ‘Why would anyone build a castle under a flight path?’

They even have their own private pub, the Yeoman Warders’ Club, for nights off, birthdays, anniversaries, Christmas Day (before the Queen’s speech, which no one ever misses) and whenever else they feel like a pint of Beefeater Bitter or Yeoman lager, or a slug of Beefeater Gin.

‘There’s no Hendrick’s here,’ says Yeoman Warder AJ Clark, one of two female Beefeaters. ‘They look after us very well. Everyone does.’

Of course they do. Beefeaters have been part of the Tower of London since 1485, when they were established by Henry VII to guard the prisoners.

Ever since, and with the help of the famous ravens, they have protected the Tower (if not the prisoners), guarded the Crown Jewels and performed the ‘ceremony of the keys’ every night. For a long time they also polished off vast daily rations of beef that may, or may not, have provided their nickname and, since Victorian times, acted as highly skilled tour guides.

But perhaps not for much longer.

Last week, the Historic Royal Palaces (HRP) charity announced that, for the first time in their 535-year history, redundancies are in the offing. These will be voluntary to start with but after that, the axe will (so to speak) start falling on the rest of them.

It has come as a terrible shock. Many Beefeaters assumed redundancy wasn’t an option for them.

After all, they were at the Tower when Anne Boleyn was executed in 1536, when Guy Fawkes was tortured in 1605 and when Hitler’s deputy Rudolf Hess became the final state prisoner to be held there in 1941.

Beefeaters have a visceral attachment to the Tower, to each other, to their beloved Queen and to their calling.

‘This is not just a job. This is a family. This is our way of life,’ says Yeoman Warder Clark, 44. ‘To come here is like the icing on the cake after decades of service.’ 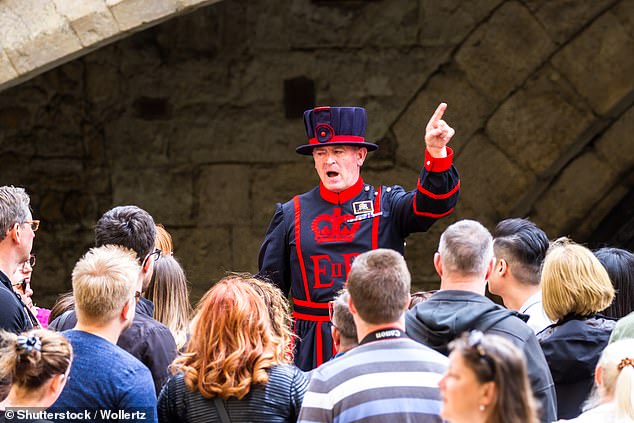 Even so, surely the Beefeaters are the Tower?

‘We bring it alive and we’re proud of that,’ says Chief Yeoman Warder Peter McGowran. They are also incredibly dedicated individuals who have been serving Queen and country almost all their lives.

To become a Beefeater, you must be a former warrant officer who has served in the Armed Forces for more than 22 years and has an unblemished service record.

AJ Clark joined the Army when she was 17, spent 24 years in the Royal Logistic Corps and her uniform — please, don’t ever call it a costume — is festooned with medals from tours of Bosnia, Kosovo, Iraq and Afghanistan.

Peter McGowran was in the Royal Air Force Regiment, serving all over the world.

There are dozens of applicants for each position and a rigorous interview process. Because it takes a particular sort of person to make a Beefeater.

For starters, they have to really love people. They must be tirelessly chatty and enthusiastic, even the 7,498th time they are asked where the loos are.

There are also the endless selfies. ‘We are on so many Facebook accounts and a lot of American Christmas cards,’ says AJ Clark.

They have to tell historical stories for hours each day to groups of up to 150 people, while wearing their elaborate ‘blue undress’ uniform of trousers, belted tunic and bonnet.

The ‘state dress’ uniform, which they use for parades, official ceremonies and coronations, is on another level altogether and consists of woollen tights, knickerbockers, a tunic, velvet bonnet, white ruff, black patent shoes, a sword . . . the list goes on. It all weighs more than 22 lb and costs £3,500 to make. 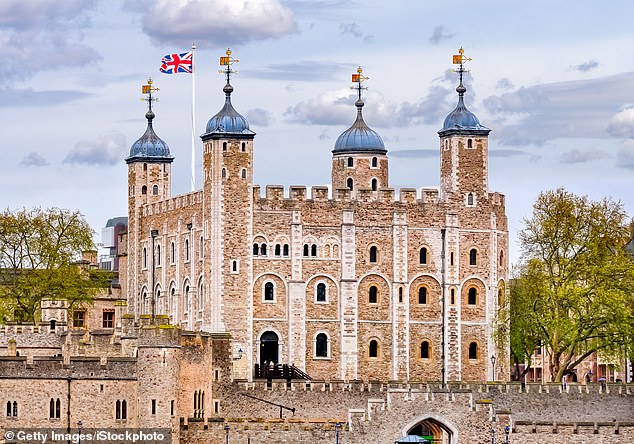 Beefeaters have been part of the Tower of London since 1485, when they were established by Henry VII to guard the prisoners

Just getting it on sounds hellish but Beefeaters gleam with pride when they speak of wearing it.

When the Tower closed because of the pandemic in March — for the first time in as long as anyone could remember — they found it bizarre and exciting at first.

‘Suddenly it was ours!’ says Clark. ‘Just us and our families. It was so quiet and peaceful.’

But the novelty soon wore off.

‘Two weeks later, we started to feel like we were in our own prison,’ she says. Even the ravens started playing up, dive-bombing members of staff and attacking the governor every time he came and went from his home.

So some of the Beefeaters volunteered for the NHS at the Nightingale and Charing Cross hospitals. Others cleaned the loos and mowed the grass.

But they missed the tours, the public and revelling in all their five-star reviews on Tripadvisor.

(Beefeaters are obsessed with Tripadvisor, where the Tower is consistently the top-rated paid tourist attraction in the UK, and they continually check recent posts to make sure their service is up to scratch.)

The downside of having to live on site, even in subsidised accommodation in London’s most recognisable landmark, is cabin fever. 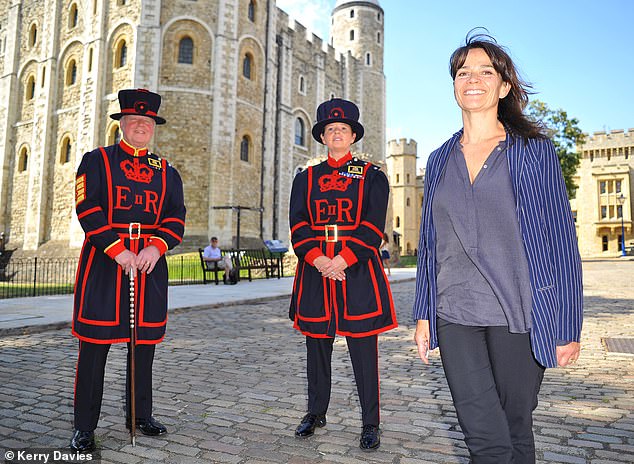 ‘It can become quite claustrophobic,’ says Clark. ‘Most people have another home somewhere. You have to get out.’

McGowran moved to the Tower in 2008 with his 14-year-old youngest son and wife, after she suggested he should become a yeoman warder on the basis that he was good at telling stories and she had always fancied seeing him in a dress. ‘I still pinch myself that this is my life,’ he says.

Like Clark, he started off in 7 Tower Green, the ‘haunted’ ground-floor flat next to Queen’s House — the only timber-framed house thereabouts to survive the Great Fire of London, and which was prison to Henry VIII’s wife Anne Boleyn — where the bed moves about in the night.

For three years he was a member of the raven team. Care of the ravens is crucial. Legend has it that the day they disappear from the Tower, Crown and country will fail.

So he was up at 6am each day to let them out, feeding them 6oz of fresh meat from Smithfield market along with hard-boiled eggs, biscuits soaked in blood, chickens and the occasional rabbit to supplement the endless sausage rolls and crisps they steal from visitors’ picnics. 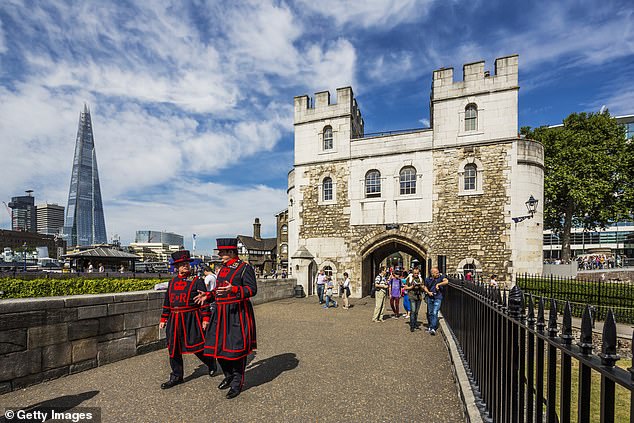 Last week, the Historic Royal Palaces (HRP) charity announced that, for the first time in their 535-year history, redundancies are in the offing

Since then, he has risen first to Yeoman Sergeant and then, in 2018, to Chief Warder.

Today he wears the golden embroidered keys on his tunic with a spring in his step.

Not that it has been all jokes and jolly pints of Yeoman lager. Over recent years, there have been a few ups and downs.

A sexual discrimination court case bought by the first female warder made headlines in 2009.

And early last year there were strikes when the Beefeaters’ pension provision was fiddled about with by HRP.

But Covid and the dearth of visitors (there isn’t even a queue to see the Crown Jewels at the moment — this really is the time to go if you’ve never been) have put all that into perspective.

As McGowran puts it: ‘We’ve been through the Great Fire of London, the plague, the First World War and the Second World War. What a nightmare that must have been, doing the lock-up at night with the bombs coming down and being down to just one raven! But on we went and on we’ll go, however much they cut our numbers.’

Let’s hope so. Because the Tower without the Beefeaters would be like Buckingham Palace without the Queen.