Japan produced their second stunning comeback win of the tournament to dethrone Spain as winners of Group E.

Two goals in three minutes from Ritsu Doan and Ao Tanaka caught Spain off guard and from there they were able to cling on to take top spot, with Luis Enrique’s Spain through as runners-up.

Sportsmail rates both sets of players after a thrilling night at the Khalifa International Stadium.

Shuichi Gonda – Could do nothing about Spain’s goal, with Morata totally unmarked in the six-yard area to head in. His defence were warriors in that second half but he commanded them brilliantly. Stood tall when needed. 7

Shogo Taniguchi – One of five Japan changes from the loss to Costa Rica and class showed as to why they were made. For as dominant as Spain were in the first half, he was part of a back three that marshalled Gonda’s goal superbly. 7

Mayo Yoshida – Guilty of switching off – he wasn’t alone – for Morata to score so easily in the first half but imperious thereafter. He will relish the battle against Croatia in the last-16. 7 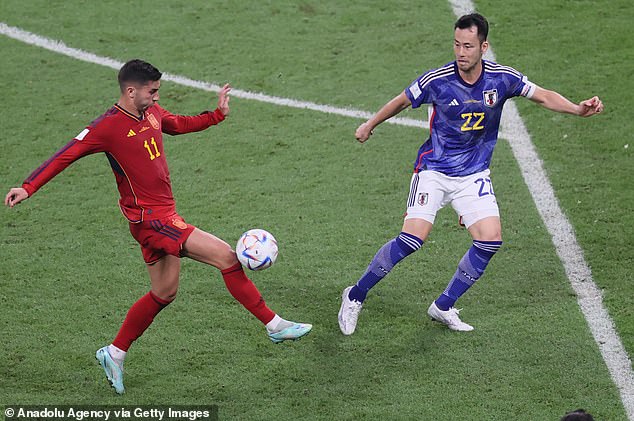 Kou Itakura – The final component of the back three. It looked a disastrous tactic in the first half when Japan had no control but they limited Spain to five shots on target, and few really threatened Gonda in goal. A blue-print for others to follow. 7

Yuto Nagatomo – Hooked at half-time. Was given a torrid time in the first half but nobody in the blue of Japan had done themselves justice. Something had to give with changes at the break. 6

Hidemasa Morita – The Sporting Lisbon ace got totally outplayed for 45 minutes and while he never got much control in that midfield battle he didn’t need to for Japan to thrive. A brick wall when he needed to put his body on the line. 6

Junya Ito – Got the assist for Japan’s equaliser and looked a totally transformed player in that second half. Left nothing out on the pitch after a gruelling 90 minutes. 7

Ao Tanaka – The matchwinner, the history maker. What a night for Ao Tanaka. His goal will be scrutinised to within an inch of his life as to whether Kaoru Mitoma had kept it in play before crossing, but Tanaka won’t care. Class apart in that second half. 8.5 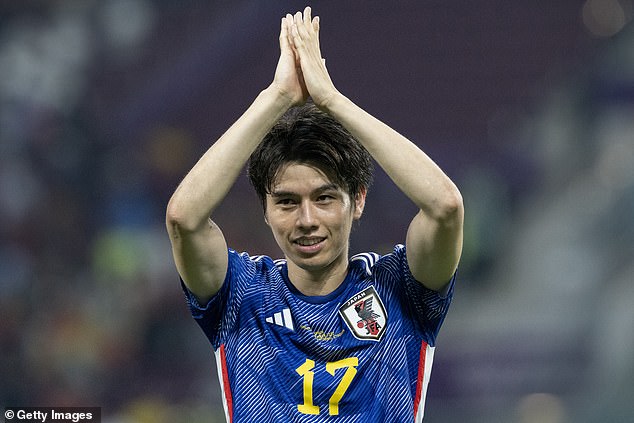 The matchwinner on the night, Ao Tanaka will be heralded as a hero back in Japan for his goal

Daichi Kamada – A classy second half from a player that is playing himself into January transfer window territory. Eintracht Frankfurt have a star in the making if they keep hold of the 26-year-old. 8

Takefusa Kubo – Quiet first half by the Real Sociedad winger’s standards and he will be eager to light it up in the last-16 against Croatia. 7

Daizen Maeda – Brought in as one of the changes up top, Used his pace to good effect to trouble Spain for the 62 minutes he played. 7

Ritsu Doan (for Takefusa Kubo, 46mins) – A sensational cameo from Doan. Totally transformed the game to bring Japan into it and his goal injected belief into all of his team-mates. One of the best impacts off the bench in this tournament so far. 8 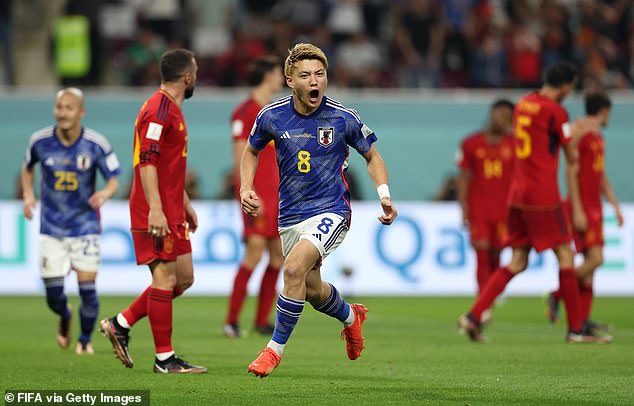 Kaoru Mitoma (for Yuto Nagatomo, 46mins) – Second of two subs at the break, the Brighton ace was bright and gave Spain plenty to think about. He’s going to be a problem for defences in the Premier League when domestic action resumes. 8

Takuma Asano (for Daizen Maeda, 62mins) – Came on at a point where Japan looked to be determined to add to their lead. The game went towards attack vs defence with Spain the aggressors, but he didn’t shirk his defensive assignment. 7

Takehiro Tomiyasu (for Daichi Kamada, 69mins) – The Arsenal defender has been nursing an injury out in Qatar but he defended heroically when he came on and made a number of decisive interventions on Jordi Alba and Ansu Fati. 7.5

Wataru Endo (for Ao Tanaka, 87mins) – Had very limited involvement aside from seeing out the final moments as Japan dug in one through 11.

Unai Simón – Would have been forgiven for bringing out a sudoku to solve in the second half, so straight forward was the first with zero shots on target from Japan. But Simon had a nightmare second half and should have done much better for Doan’s strike, which went right through his hands. Needs to fix up – fast. 4 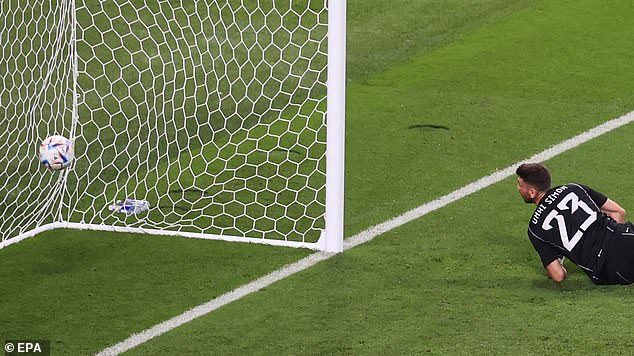 Cesar Azpilicueta – It was his ball in for Morata to nod in the opener and it is difficult to say he did much wrong. Was taken off at half-time after a breeze of an opening 45 minutes. 6

Rodri – Looked a Rolls Royce in that first half but come the second he resembled more of a wagon in need of an engine change as Japan swarmed Spain’s centre backs. Has had better nights. 6

Pau Torres – Struggled on the night and relied heavily on Rodri to guide him. Errant passes in the first were coupled up with positional mistakes in the second. 5

Alejandro Balde – One of five changes from the start but he did little outside of a flurry in the opening minutes to make a credible argument to start in the last-16 game against Morocco. Hooked after 68 minutes. 5

Gavi – Was an injury doubt going into the game and showed flashes in the first half of why Enrique raves about him going on to define an era in his position. Looked jaded in that second half before being replaced by Ansu Fati. 6

Sergio Busquets – Positive – he avoided the booking that would have ruled him out of a last-16 match-up with Croatia. Negative – lost control of the game in the first 15 minutes of that second half. Needs to be better in moments of strife as the elder statesman and metronome in this side. 5 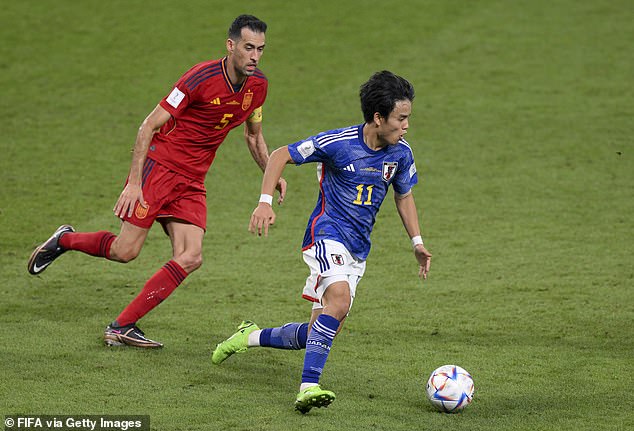 Pedri – Looked dynamite in the first game and tidy in the draw with Germany but was shy of his creative best when the going got tough against Japan. Lacked ideas in the final third. 6

Nico Williams – Was confused for his Ghanaian brother Inaki by ITV’s commentary team for about 35 minutes, and he was eventually hooked before the hour. Again, flashes of brilliance early on but couldn’t sustain when momentum shifted. 6

Alvaro Morata – Opened the scoring with his 30th goal for his country. Morata has his critics but scoring in all three group games in Qatar speaks volumes. Strange decision to take him off when Spain were down 2-1 and needing a goal. 6

Dani Olmo – Was the man who had the chances in both halves. Wasteful. Spain will need Olmo to find his shooting boots as they look to make a deep run from here. 5

Dani Carvajal (for Cesar Azpilicueta, 46mins) – Not exactly a glowing report card when you come on and within five minutes your side have gone from 1-0 up to 2-1 down. Winning goal came down his side, too. 5

Marco Asensio (for Alvaro Morata, 57mins) – Anonymous showing from the Real Madrid attacker when he came on. Fail to see what he was going to offer more than Morata, who had already scored, could. 5 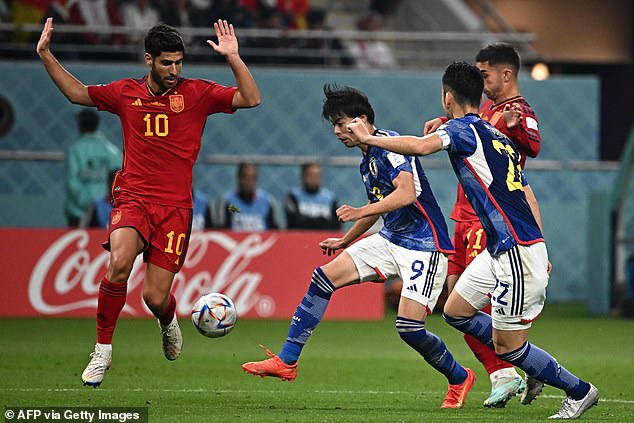 Ferran Torres (for Nico Williams, 57mins) – The brightest of Spain’s five subs. Dominated the right side when he came on and made a number of dangerous, penetrative runs. Biggest critique was his final ball. 6.5

Jordi Alba (for Alejandro Balde, 68mins) – Moaned and groaned at not being awarded soft fouls and took some speculative shots that were never on. Needs to better use his experience with so many youngsters looking to him. 6

Ansu Fati (for Gavi, 68mins) – The Barcelona forward is one of the brightest youngsters in the world but this won’t go on his showreel. Was kept in check by Tomiyasu. 6