Asian officials are ‘holding their breath’ in apprehension of President Donald Trump’s visit next week to the Pacific Rim.

Government representatives in South Korea and Japan are fearful that Trump will taunt communist strongman Kim Jong-un from their doorsteps, regional experts are saying, and mire them in an intractable war.

‘Seoul and Tokyo are more nervous about Washington than I have seen during my 24 years working [in] Asia,’ Heritage Foundation senior research fellow Bruce Klingner told DailyMail.com from Tokyo.

The Council on Foreign Relations’ U.S.-Korea policy director Scott Snyder said officials in Seoul are ‘praying that the worst doesn’t transpire’ during Trump’s speech to South Korea’s National Assembly and officials are approaching it with ‘a lot of white knuckles.’

Trump has rattled both governments with the threats and name-calling he’s directed at Kim over the rogue regime’s nuclear program. The 71-year-old U.S. president has repeatedly referred to his 33-year-old counterpart as ‘Little Rocket Man.’

His administration’s maybe-we-will, maybe-we-won’t attitude toward preemptive strike on Pyongyang has also unnerved American allies in the region. SAYS WHO

‘I think they’re confused, and I think they’re a little bit shaken because they understand that they would be in the line of fire if there’s any contact between the United States and North Korea in terms of a kinetic military operation,’ Sen. Jack Reed, the ranking Democrat on the upper chamber’s Foreign Relations Committee, told reporters this month as he returned from South Korea.

Trump warned Kim during his first speech to the United Nations General Assembly in September that he would ‘totally destroy’ North Korea if it moves to strike the U.S. or its allies.

North Korean Foreign Minister Ri Yong-ho claimed afterward that the U.S. had formally declared war on his country, and that it reserves the right to blast American bombers out of the sky even if they are flying outside of the communist nation’s airspace. 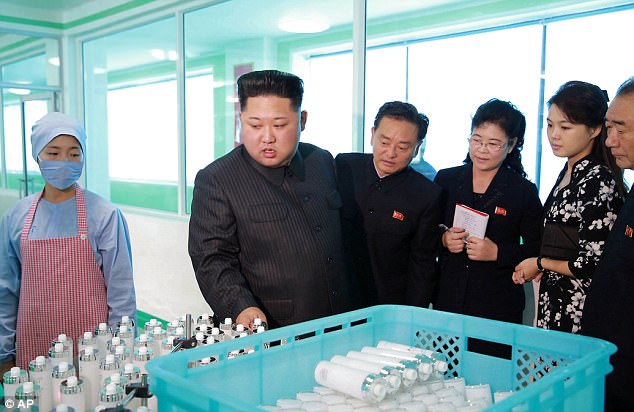 This undated photo provided on Sunday, Oct. 29, 2017, by the North Korean government shows North Korean leader Kim Jong Un, center, inspects products during a visit to a cosmetics factory in Pyongyang. Trump has repeatedly referred to the 33-year-old as ‘Little Rocket Man’

The Trump administration’s oft-stated position is that ‘all options are on the table’ – a line that has become U.S. officials’ stock answer when they’re asked publicly about the prospects for military intervention.

Senior Trump administration officials have stressed that war is not the president’s preference, however. 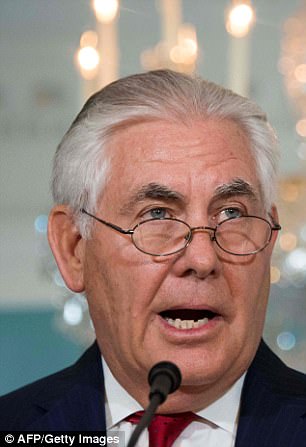 Asian officials are confused by Trump’s rhetoric on North Korea, which is often at odds with what Secretary of State Rex Tillerson says

‘He wants this solved diplomatically. He’s not seeking to go to war,’ Secretary of State Rex Tillerson said earlier this month on CNN.

The president had scolded Tillerson on Twitter before the secretary of state’s comments, asserting that he is ‘wasting his time trying to negotiate with Little Rocket Man.’

Tillerson argued after the fact Trump did not actually mean what he said.

‘Those diplomatic efforts will continue until the first bomb drops,’ the chief U.S. diplomat explained.

The episode generated confusion in the U.S. and abroad about Trump’s position on diplomatic talks. The president’s later insistence that ‘only one thing will work’ with Kim, and that Americans might be witnessing the ‘calm before the storm,’ led to more frayed nerves. 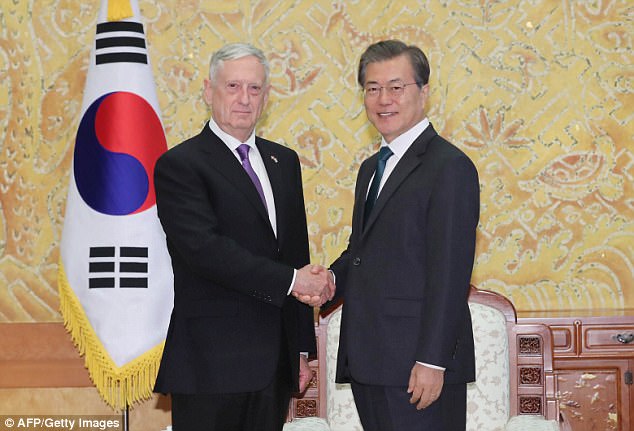 South Korean President Moon Jae-In (R) shakes hands with US Secretary of Defense Jim Mattis (L) during their meeting at the presidential Blue House in Seoul on Friday. Government representatives in South Korea are fearful that Trump will taunt Kim Jong-un from their doorsteps

Klingner told DailyMail.com that ‘Trump’s inconsistent messaging’ has the governments in Japan and South Korea concerned.

‘They are looking for a consistent message, most notably on reassurance of US commitment and resolve to defend them. They also seek to be fully consulted and coordinated with on policy toward North Korea,’ Klingner said.

‘Seoul and Tokyo are simultaneously concerned about [the] U.S. entangling them in a war with North Korea, abandoning them once Pyongyang can threaten the continental U.S. with nuclear weapons, and that President Trump will cut a bilateral deal with North Korea.’

A trip to the demilitarized zone on the Korean Peninsula is still a possibility.

It is common for U.S. presidents to hold news conferences with their hosts when they are traveling abroad, but the White House has not said whether that will be the case when Trump meets with South Korean President Moon Jae-in.

A U.S. official indicated to reporters last week during a press event that Trump would follow Moon’s lead during his brief stay in Seoul.

But that won’t likely extend to giving the South Korean president advance notice of what he’ll tell the nation’s elected legislature.

While the South Korean government would prefer to receive a copy of Trump’s remarks to the National Assembly, ‘it’s really almost a fool’s errand to try to manage that,’ Snyder said.

Regardless of what the U.S. president’s advisers direct him to say about North Korea’s illicit nuclear tests, the possibility remains that Trump will heckle his adversary from just across the border.

As a result, South Korean officials are ‘stuck holding their breath, and praying that the worst doesn’t transpire,’ Synder said.