Japan’s deputy prime minister has retracted a comment made a day earlier that seemed to suggest that Nazi leader Adolf Hitler had good intentions.

Taro Aso was speaking at a seminar for his faction in the ruling Liberal Democratic Party on Tuesday when he mentioned the Nazi leader in a speech.

He said: ‘I don’t question a politician’s motives; it is delivering results that matter. Hitler, who killed millions of people, was no good, even if his intentions had been good.’

Retracted: Japan’s deputy prime minister Taro Aso said: ‘Hitler, who killed millions of people, was no good, even if his intentions had been good.’

On Wednesday, Aso said that remark was ‘inappropriate’ and he would like to retract it and regretted having caused a misunderstanding.

He said he meant that Hitler was a bad leader with bad intentions.

An official at the center, Rabbi Abraham Cooper, said, ‘When will the elite of Japan wake up and acknowledge that they have a ‘Nazi problem’?’ 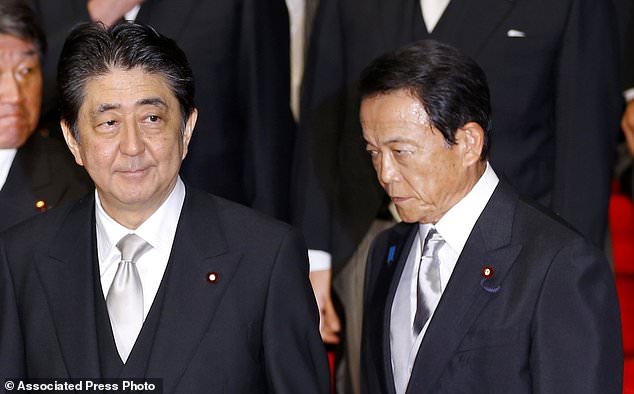 Misunderstanding: Aso, right, with Prime Minister Shinzo Abe, left,said he had meant that Hitler was a bad leader with bad intentions

Aso is also the finance minister in Prime Minister Shinzo Abe’s Cabinet and served as Japan’s prime minister in 2008-2009.

Japan’s chief cabinet secretary, Yoshihide Suga, said after Aso retracted his statement that the deputy prime minister ‘should make his own explanation when the time comes.’

Aso in 2008 was criticized for comparing the tactics of the Democratic Party of Japan to those of Nazis in 1930s Germany.

And in 2013 he withdrew a comment that seemed to suggest Japanese leaders should follow Nazi Germany’s example in changing the constitution.