Japan will get its first aircraft carriers since WWII and buy dozens of fighter jets under a new defence plan to counter Chinese military expansion.

The new £192billion ($244billion) five-year defence plan approved today calls for the upgrade of two helicopter carriers so that they can launch US jets.

Shinzo Abe’s latest boost to the Japanese military comes as his ministers argue there are ‘strong concerns’ over Chinese manoeuvres and North Korea remains a threat. 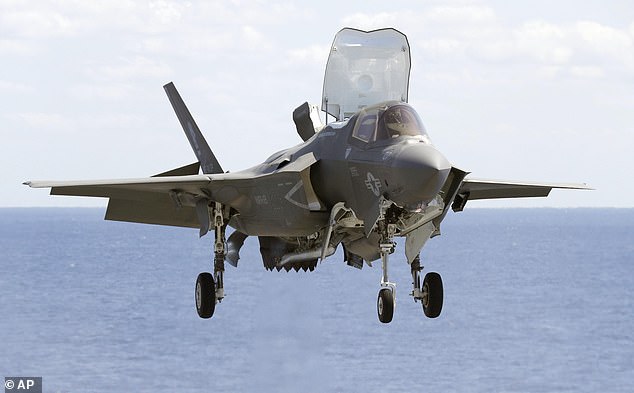 A US F-35B fighter jet lands aboard amphibious assault ship Wasp during an exercise in the western Pacific with Japanese forces; the Japanese will hope to deploy such advanced fighters after converting their carriers

But the move is controversial, with critics arguing it shifts Tokyo further away from its commitment to strictly defensive capabilities under Japan’s post-WWII pacifist constitution.

‘We will secure both the quantity and quality of defence capability that is necessary… to meet the rapidly changing security environment,’ Chief Cabinet Secretary Yoshihide Suga told a regular press briefing on Tuesday.

‘We believe this is within… what is allowed under the constitution.’

It calls for the defence ministry to upgrade two flat-top Izumo-class destroyers to enable them to launch fighters with short take-off and vertical landing abilities, like the F-35B stealth fighter.

The separate plan endorsed by the cabinet on Tuesday, says they will buy 42 F-35s over the next decade, with the F-35B variant widely considered the likeliest candidate. 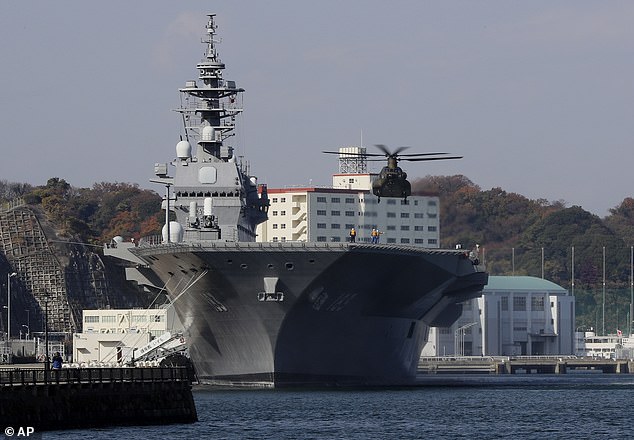 A helicopter lands on the deck of the Japanese destroyer Izumo of Japan’s Maritime Self-Defense Force in December 2016; their new defence guidelines will allow them to deploy advanced US stealth fighters

It also plans over the same period to buy 105 F-35As, a variant of the advanced jet which performs conventional takeoffs and landings and cannot be used on the retrofitted destroyers.

Local media have said the purchases could total more than one trillion yen (£7billion).

Chinese foreign ministry spokesman Hua Chunying said Japan’s concerns about Beijing’s military are ‘not conducive to the development and improvement of Sino-Japanese relations’.

Beijing has already expressed its ‘strong dissatisfaction and opposition’ and ‘urges Japan to adhere to a purely defensive policy’, she added at a regular press briefing.

Last year, China unveiled its first domestically built aircraft carrier as it continues to assert its vast claims to the South China Sea. Beijing’s first carrier, the Liaoning, is a second-hand Soviet ship built nearly 30 years ago and commissioned in 2012.

The new plans come after pledges from Japan to buy more US military equipment, under pressure from President Donald Trump, who has repeatedly complained about Washington’s huge trade deficit with Tokyo and also urged Abe to expand the country’s defensive capacity.

Abe has aggressively expanded Japan’s alliance with the United States. 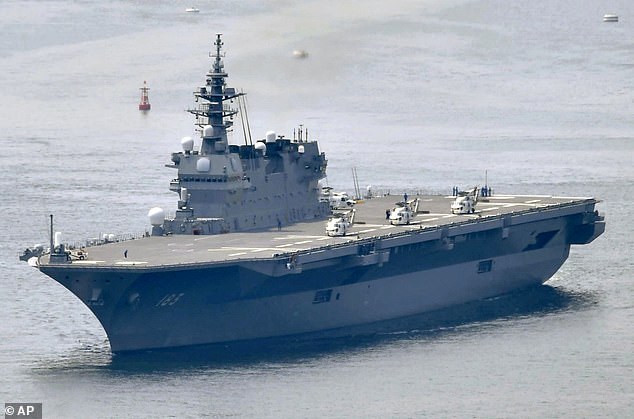 A Japanese helicopter carrier; the Japanese have made changes to their military code due to concerns over China and North Korea

He has campaigned for years to amend Japan’s pacifist constitution, arguing that it ties the hands of the country’s Self-Defense Forces (SDF) even in protecting the country’s allies from attack.

Government officials were at pains to make clear the policy did not represent a shift away from the country’s long-standing focus on defence.

‘The Izumo-class destroyers will continue to serve as multi-function, multi-purpose destroyers. This mode of operation falls within the realm of an exclusively defence-oriented policy,’ Defence Minister Takeshi Iwaya told a regular briefing.

The remodelled ships and new fighter jets will ‘increase operational flexibility’ for Japan’s military as China boosts its naval footprint in southern waters that are home to several remote Japanese islands, a defence official said.

‘We have a very, very small SDF footprint’ in the area between Okinawa and Taiwan, he added.

But he said it was a ‘misunderstanding’ to believe that the upgrades would create ‘full-fledged aircraft carriers’ capable of staging offensive action in distant regions.

And the new fighters would be stationed at existing ground facilities, not on the ships, he said.

‘We are not creating carrier air wings or carrier air squadrons’ like the US navy, he added.

‘That’s not going to happen.’