North Korea has miniaturised nuclear warheads and made them small enough to fit on ballistic missiles, Japan believes.

In last year’s report Japan said it was ‘possible’ that North Korea had achieved miniaturisation, but Tokyo now appears to have upgraded its assessment, according to Japanese newspaper Yomiuri.

Japan is seen as a ‘primary target’ of nearby North Korea’s weapons capabilities and fears that Pyongyang’s nuclear programme is ‘growing unabated’, experts say.

The latest findings come alongside newly-released pictures which suggest a North Korean plant may be leaking hazardous waste into a nearby river.

The Japanese findings come alongside newly-released photos which suggest that North Korea’s nuclear programme is leaking toxic waste into a river.

US-based researcher Jacob Bogle, who has created a comprehensive map of the country from satellite images, made the alarming discovery while looking at pictures of Pyongsan uranium mine dating back to 2003. 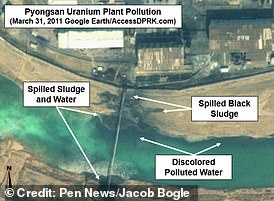 Waste water will contain radioactive radium which can cause cancer, it is feared

Mr Bogle noticed that a waste pipe built to carry toxic water from the facility – which processes coal into uranium – to a nearby reservoir appears to be leaking into a river.

That tributary runs into the Ryesong River, which in turn empties into the Yellow Sea – an area between mainland China and the Korean Peninsula around which some 600 million people live.

The waste water will contain radioactive radium which can cause cancer, Mr Bogle says, along with various heavy metals which cause brain defects.

”Each of the images shows an ever-growing pile of leaked material on either end of the pipe that takes waste material from the plant to an unlined reservoir,’ he said.

‘Some of the images also show fluids being actively spilled directly into the river.’

The Japanese report highlights the lack of progress on denuclearisation talks, said Vipin Narang, a nuclear affairs expert at MIT.

‘It is Japan that is most threatened, and probably the primary target of such a capability,’ he said.

‘So openly acknowledging it underscores Tokyo’s acute fears that North Korea’s nuclear program continues to grow unabated with no foreseeable plan to slow its growth, let alone eliminate them.’

The report is due to be approved at a Cabinet meeting in Japan in mid-September.

However, they said ‘it is possible that North Korea has achieved the miniaturisation of nuclear weapons and has developed nuclear warheads.’

Japan’s latest findings are similar to those of its allies, America and South Korea.

The South said in a 2018 defence paper that North Korea’s ability to miniaturise nuclear weapons ‘appears to have reached a considerable level.’

South Korean intelligence bosses believe that the North continued to miniaturise nuclear warheads even after the Singapore summit between Trump and Kim in June 2018, according to Korean media.

At that time, North Korea committed ‘to work toward complete denuclearisation of the Korean peninsula’ and destroyed some tunnels and buildings at its Punggye-ri nuclear test site.

However, a second Trump-Kim meeting in February collapsed without an agreement, and North Korea has since resumed missile tests amid angry exchanges of rhetoric between the two countries. 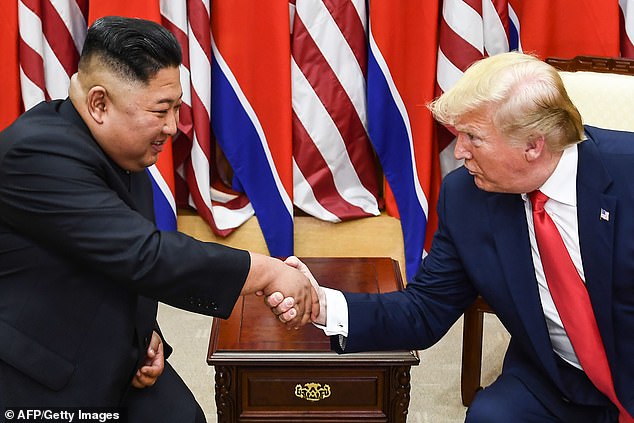 Hopes for a breakthrough were revived when Trump and Kim shook hands in an impromptu meeting in the border zone on June 30.

At that meeting, Trump became the first sitting U.S. President to step over the border into North Korean territory.

But matters have since worsened again amid a row over military drills in South Korea.

There are close to 30,000 US troops stationed in South Korea and their annual drills with tens of thousands of South Korean soldiers have always infuriated the North.

Washington has insisted on complete denuclearisation as a condition for lifting punishing U.S. sanctions.

Stephen Biegun, the U.S. envoy on North Korea, was in Seoul this week to meet with South Korean officials, and said he was prepared to engage with North Korea ‘as soon as we hear from our counterparts.’